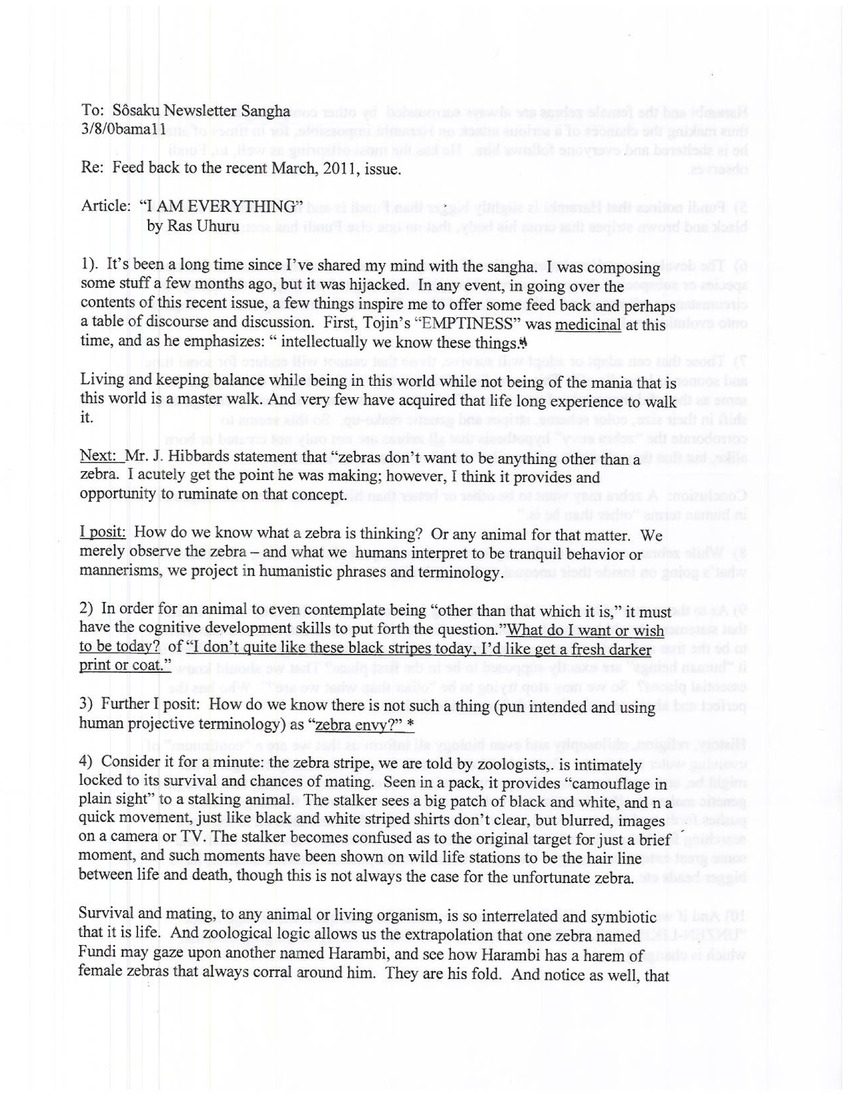 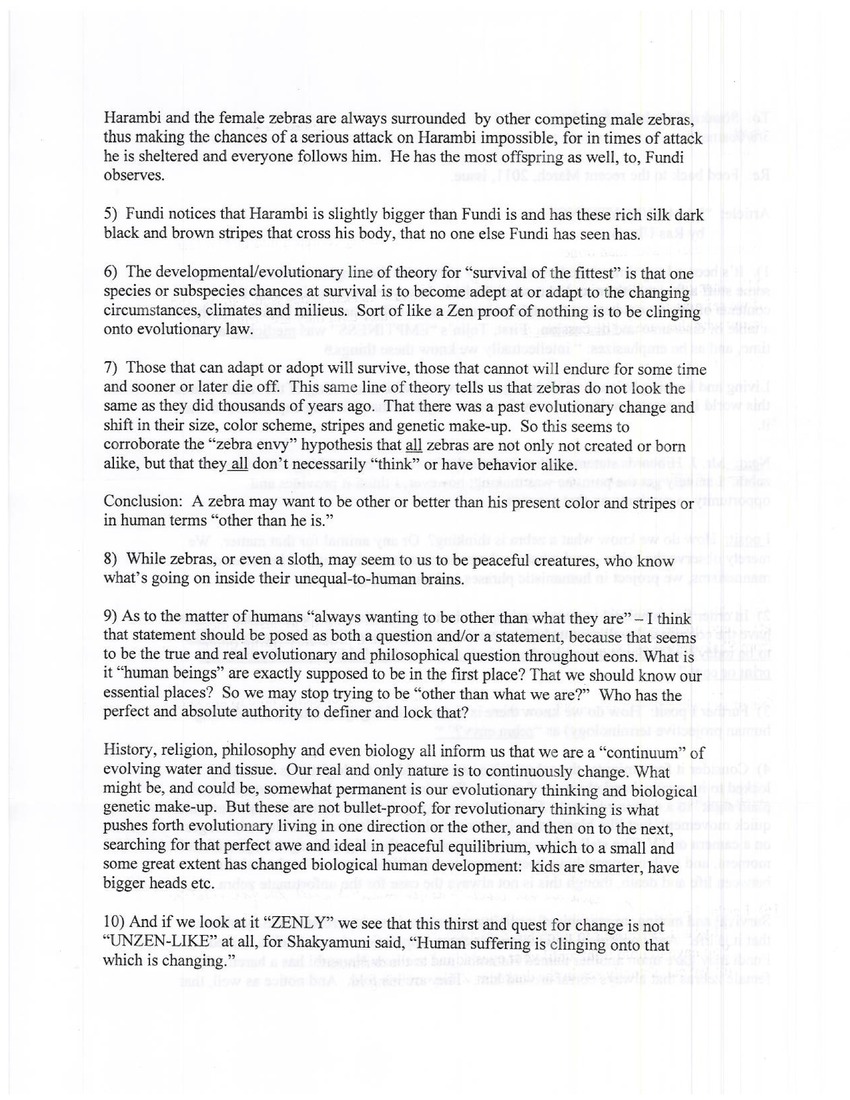 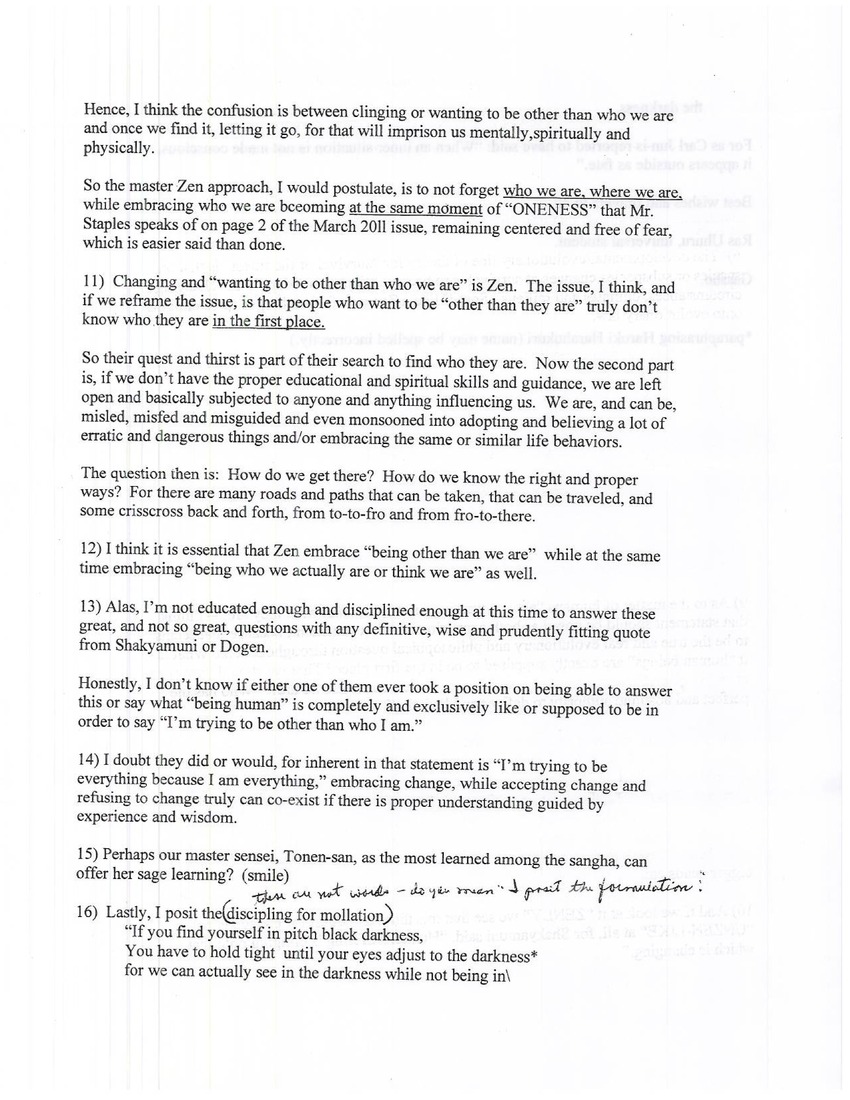 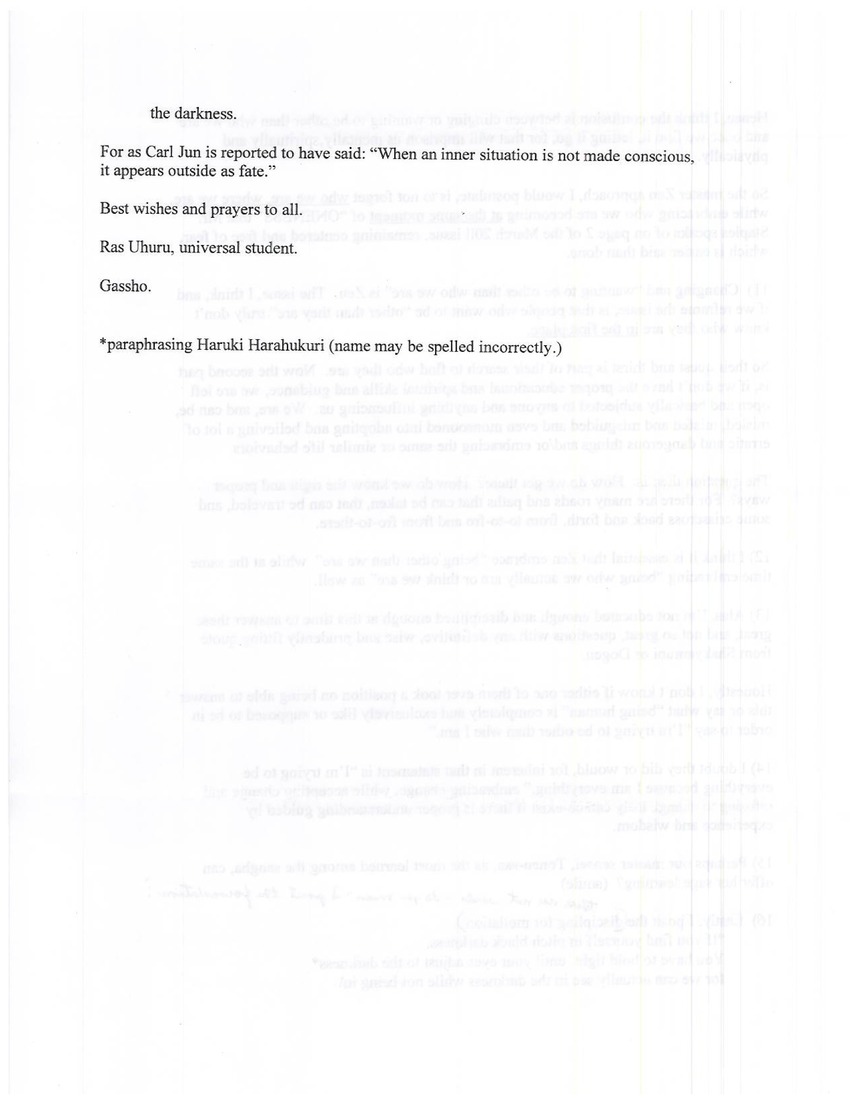 Article: "I AM EVERYTHING"
by Ras Uhuru

1). It's been a long time since I've shared my mind with the sangha. I was composing some stuff a few months ago, but it was hijacked. In any event, in going over the contents of this recent issue, a few things inspire me to offer some feed back and perhaps a table of discourse and discussion. First, Tojin's "EMPTINESS" was medicinal at this time, and as he emphasizes: "intellectually we know these things."

Living and keeping balance while being in this world while not being of the mania that is this world is a master walk. And very few have acquired that life long experience to walk it.

Next: Mr. J. Hibbards statement that "zebras don't want to be anything other than a zebra. I acutely get the point he was making; however, I think it provides an opportunity to ruminate on that concept.

I posit: How do we know what a zebra is thinking? Or any animal for that matter. We merely observe the zebra - and what we humans interpret to be tranquil behavior or mannerisms, we project in humanistic phrases and terminology.

2) In order for an animal to even contemplate being "other than that which it is," it must have the cognitive development skills to put forth the question. "What do I want or wish to be today?" or "I don't quite like these black stripes today, I'd like to get a fresh darker print or coat."

3) Further I posit: How do we know there is not such a thing (pun-intended and using human projective terminology) as "zebra envy?" *

4) Consider it for a minute: the zebra stripe, we are told by zoologists, is intimately locked to its survival and chances of mating. Seen in a pack, it provides "camouflage in plain sight" to a stalking animal. The stalker sees a big patch of black and white, and in a quick movement, just like black and white striped shirts don't clear, but blurred, images on a camera or TV. The stalker becomes confused as to the original target for just a brief moment, and such moments have been shown on wild life stations to be the hair line between life and death, though this is not always the case for the unfortunate zebra.

Survival and mating, to any animal or living organism, is so interrelated and symbiotic that it is life. And zoological logic allows is the extrapolation that one zebra named Fundi may gaze upon another named Harambi, and see how Harambi has a harem of female zebras that always corral around him. They are his fold. And notice as well, that Harambi and the female zebras are always surrounded by other competing male zebras, thus making the chances of a serious attack on Harambi impossible, for in times of attack he is sheltered and everyone follows him. He has the most offspring as well, to, Fundi observes.

5) Fundi notices that Harambi is slightly bigger than Fundi is and has these rich silk dark black and brown stripes that cross his body, that no one else Fundi has seen has.

6) The developmental/evolutionary line of theory for "survival of the fittest" is that one species or subspecies chances at survival is to become adept at or adapt to the changing circumstances, climates and milieus. Sort of like a Zen proof of nothing is to be clinging onto evolutionary law.

7) Those that can adapt or adopt will survive, those that cannot will endure for some time and sooner or later die off. This same line of theory tells us that zebras do not look the same as they did thousands of years ago. That there was a past evolutionary change and shift in their size, color scheme, stripes and genetic make-up. So this seems to corroborate the "zebra envy" hypothesis that all zebras are not only not created or born alike, but that they all don't necessarily "think" or have behavior alike.

Conclusion: A zebra may want to be other or better that his present color and stripes or in human terms "other than he is."

8) While zebras, or even a sloth, may seem to us to be peaceful creatures, who know what's going on inside their unequal-to-human brains.

9) As to the matter of humans "always wanting to be other than what they are" - I think that statement should be posed as both a question and/or a statement, because that seems to be true and real evolutionary and philosophical throughout eons. What is it "human beings" are exactly supposed to be in the first place? That we should know our essential places? So we may stop trying to be "other than what we are?" Who has the perfect and absolute authority to definer and lock that?

History, religion, philosophy and even biology all inform us that we are a "continuum" of evolving water and tissue. Our real and only nature is to continuously change. What might be, and could be, somewhat permanent is our evolutionary thinking and biological genetic make-up. But these are not bullet-proof, for revolutionary thinking is what pushes forth evolutionary living in one direction or the other, and then on to the next, searching for that perfect awe and ideal in peaceful equilibrium, which to a small and some great extent has changed biological human development: kids are smarter, have bigger heads etc.

10) And if we look at it "ZENLY" we see that this thirst and quest for change is not "UNZEN-LIKE" at all, for Shakyamuni said, "Human suffering is clinging onto that which is changing."

Hence, I think the confusion is between clinging or wanting to be other than who we are and once we find it, letting it go, for that will imprison us mentally, spiritually and physically.

So the master Zen approach, I would postulate, is to not forget who we are, where we are, while embracing who we are becoming at the same moment of "ONENESS" that Mr. Staples speaks of on page 2 of the March 2011 issue, remaining centered and free of fear, which is easier said than done.

11) Changing and "wanting to be other than who we are" is Zen. The issue, I think, and if we reframe the issue, is that people who want to be "other than they are" truly don't know who they are in the first place.

So their quest and thirst is part of their search to find who they are. Now the second part is, if we don't have the proper educational and spiritual skills and guidance, we are left open and basically subjected to anyone influencing us. We are, and can be, misled, misfed and misguided and even monsooned into adopting and believing a lot of erratic and dangerous things and/or embracing the same or similar life behaviors.

The question then is: How do we get there? How do we know the right and proper ways? For there are many roads and paths that can be taken, that can be travelled, and some crisscross back and forth, from to-to-fro and from fro-to-there.

12) I think it is essential that Zen embrace "being other than we are" while at the same time embracing "being who we actually are or think we are" as well.

13) Alas, I'm not educated enough and disciplined enough at this time to answer these great, and not so great, questions with any definitive, wise and prudently fitting quote from Shakyamuni or Dogen.

Honestly, I don't know if either one of them ever took a position on being able to answer this or say what "being human" is completely and exclusively like or supposed to be in order to say "I'm trying to be other that who I am."

14) I doubt they did or would, for inherent in that statement is "I'm trying to be everything because I am everything," embracing change, while accepting change and refusing to change truly can co-exist if there is proper understanding guided by experience and wisdom.

15) Perhaps our master sensei, Tonen-san, as the most learned among the sangha, can offer her sage learning? (smile)

16) Lastly, I posit the (disciplining for mollation) these are not words - do you mean "I posit the formulations."
"If you find yourself in pitch black darkness,
You have to hold tight until your eyes adjust to the darkness*
for we can actually see in the darkness while not being in\
the darkness.

For as Carl Jun is reported to have said: "When an inner situation is not made conscious, it appears outside as fate."

Best wishes and prayers to all.