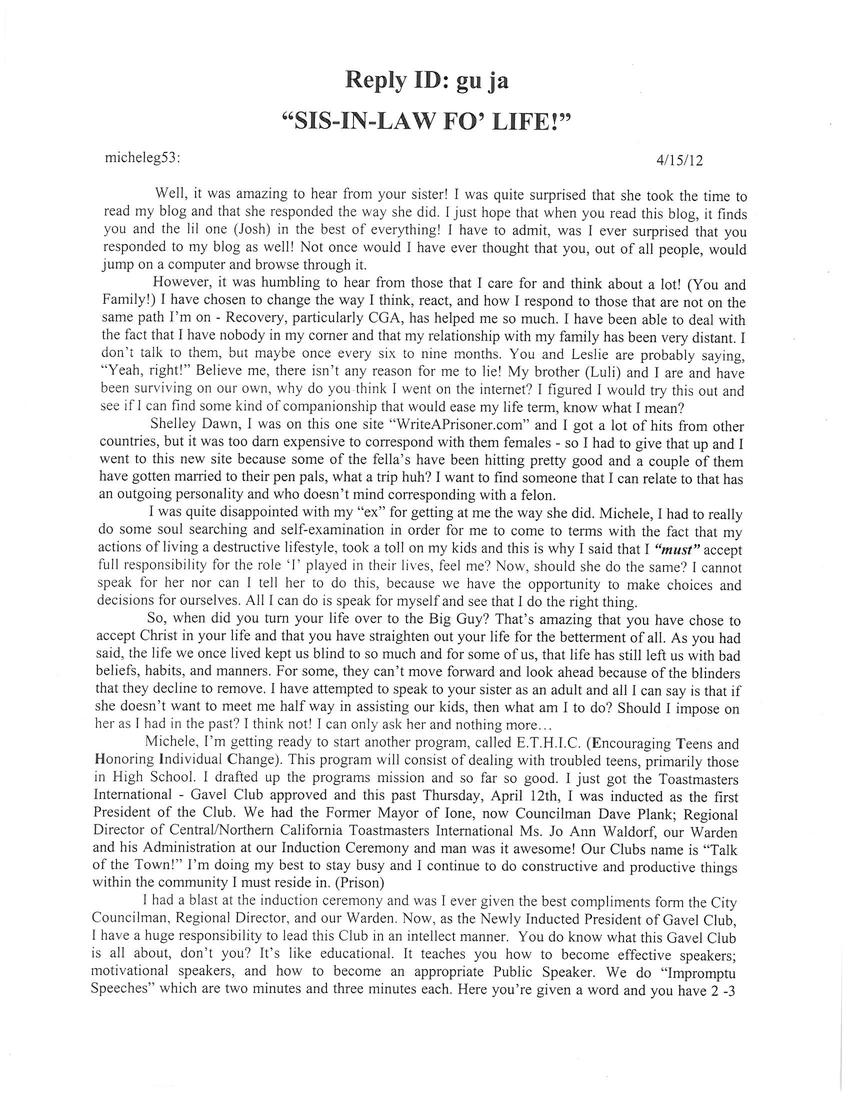 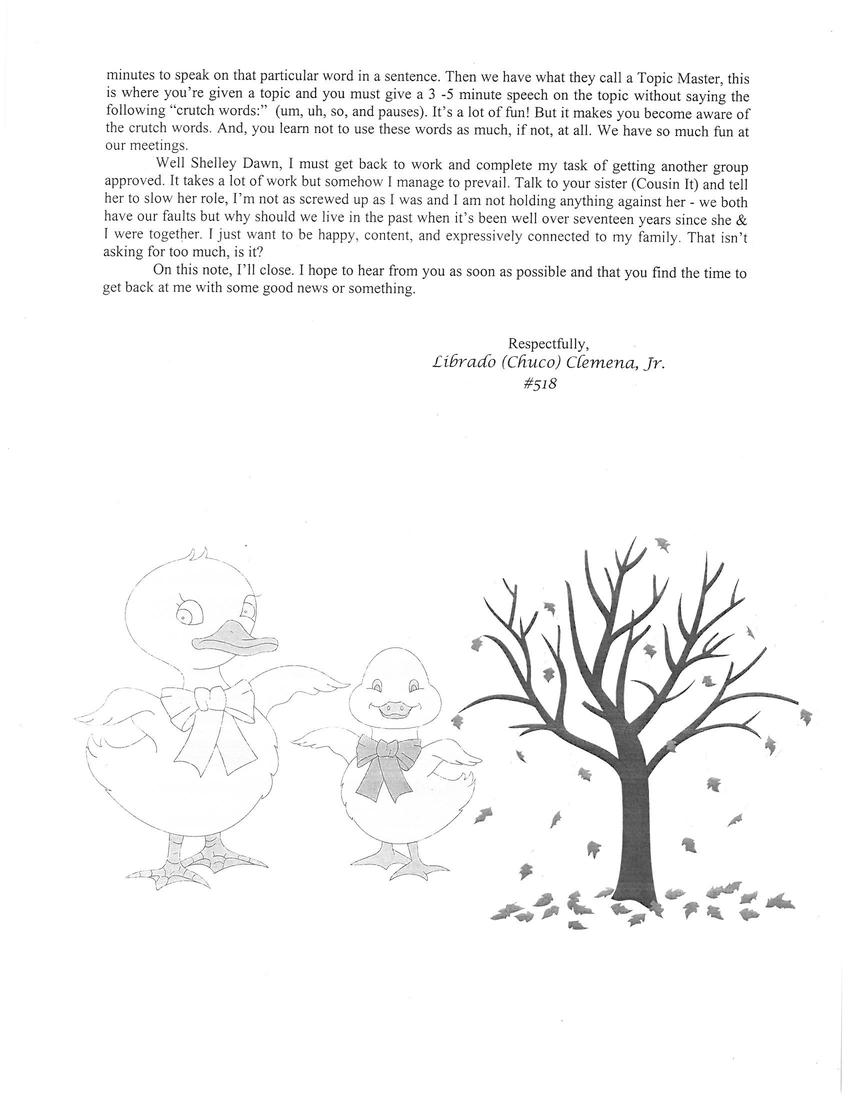 Well, it was amazing to hear from your sister! I was quite surprised that she took the time to read my blog and tha she responded the way she did. i just hope taht when you read this blog, it finds you and the lil one (Josh) in the best of everything! i have to admit, was I ever surprised that you responded to my blog as well! Not once would I have ever thought that you, out of all people, would jump on a computer and browse through it.

However, it was humbling to hear from those that I care for and think about a lot! (You and Family!) I have chosen to change the way i think, react, and how I respond to those that are not on the same path I'm on - Recovery, particularly CGA, has helped me so much. I have been able to deal with the fact that I have nobody in my corner and that my relationship with my family has been very distant. I don't talk tothem, but maybe once every six to nine months. You and Leslie are probably saying, "Yeah, right!" Believe me, there isn't any reason for me to lie! My brother (Luli) and I are and have been surviving on our own, why do you think I went on the internet? I figured I would try this out and see if I can find some kind of companionship that would ease my life term, know what I mean?

Shelley Dawn, I was on this one site "WriteaPrisoner.com" and I got a lot of hits from other countries, bit it was too darn expensive to correspond with them females - so I had to give that up and I went to this new site because some of the fella's have been hitting pretty good and a couple of them have gotten married to their pen pals, what a trip huh? I want to find someone that i can relate to that has an outgoing personality and who doesn't mind corresponding with a felon.

I was quite disappointed with my "ex" for getting at me the way she did. Michele, I had to really do some soul searching and self-examination in oder for me to come to terms with the fact that my actions of living a destructive lifestyle, took a toll on my kids and this is why I said that I "must" accept full responsibility for therole 'I' played in their lives, feel me? Now, should she do the same? I cannot speak for ourselves. All I can do is speak for myself and see that I do the right thing.

So, when did you turn your life over to the Big Guy? That's amazing that you have chose to accept Christ in your life and that you have straighten out your life for the betterment of all. As you had said, the life we once lived kept us blind to so much and for some of us, that life has still left us with bad beliefs, habits, and manners. For some, they can't move forward and look ahead because of the blinders that they decline to remove. I have attempted to speak to your sister as an adult and all I can say is that if she doesn't want to meet me half way in assisting our kids, then what am I to do? Should I impose on her as I had in the past? I think not! I can only ask her and nothing more...

Michele, I'm getting ready to start aother program, called E.t.h.I.C (Encouraging Teens and Honoring Individual Change). This program will consist of dealing with troubled teens, primarily those in High School. I drafted up the programs mission and so far so good. I just got the Toastmasters International - Gavel Club approved and this past Thursday, April 12th, I was inducted as the first President of the Club. We had the Former Mayor of Ione, now Councilman Dave plank; Regional Director of Central/Northern California Toastmasters International Ms. Jo Ann Waldorf, our Warden and his Administration at our Induction Ceremony and man was it awesme! Our lubs name is "Talk of the Town!" I'm doing my best to keep busy and I continue to do constructive and productive things within the community I must reside in. (Prison)

I had a blast at the induction ceremony and was I ever given the best compliments from the City Councilman, Regional Director, and our Warden. Now, as the Newly Inducted President of Gavel Club, I have a huge responsibility to lead this Club in an intellect manner. You do know what this Gavel Club is all about, don't you? It's like educational. It teaches you how to become effective speakers; motivational speakers, and how to become an appropriate Public Speaker. We do "Impromptu Speeches" which are two minutes and three minutes each. Here you're given a word and you have 2-3 minutes to speak on that particular word in a sentence. Then we have what they call a Topic Master, this is where you're given a topic and you must gov ea 3 - 5 minute speech on the topic without saying the following "crutch words;" (um, uh, so, and pauses. It's a lot of fun! But it makes you become aware of the crutch words. And, you learn not to use these words as much, if not, at all. We have so much fun at our meetings.

Well Shelley Dawn, I must get back to work and complete my task of getting another group approved. It takes a lot of work but somehow I manage to prevail. Talk to your sister (Cousin It) and tell her to slow her role, I'm not asscrewed up as I was and I am not holding anything against her - we both have out faults but why should we live in the past when it's bee well over seventeen years since she & I were together. I just want to be happy, content, and expressively connected to my family. That isn't asking for too much, is it?

On this note, I'll close. I hope to hear from you as soon as possible and that you find the time to get back at me with some good news or something.