The Gift Of Salvation 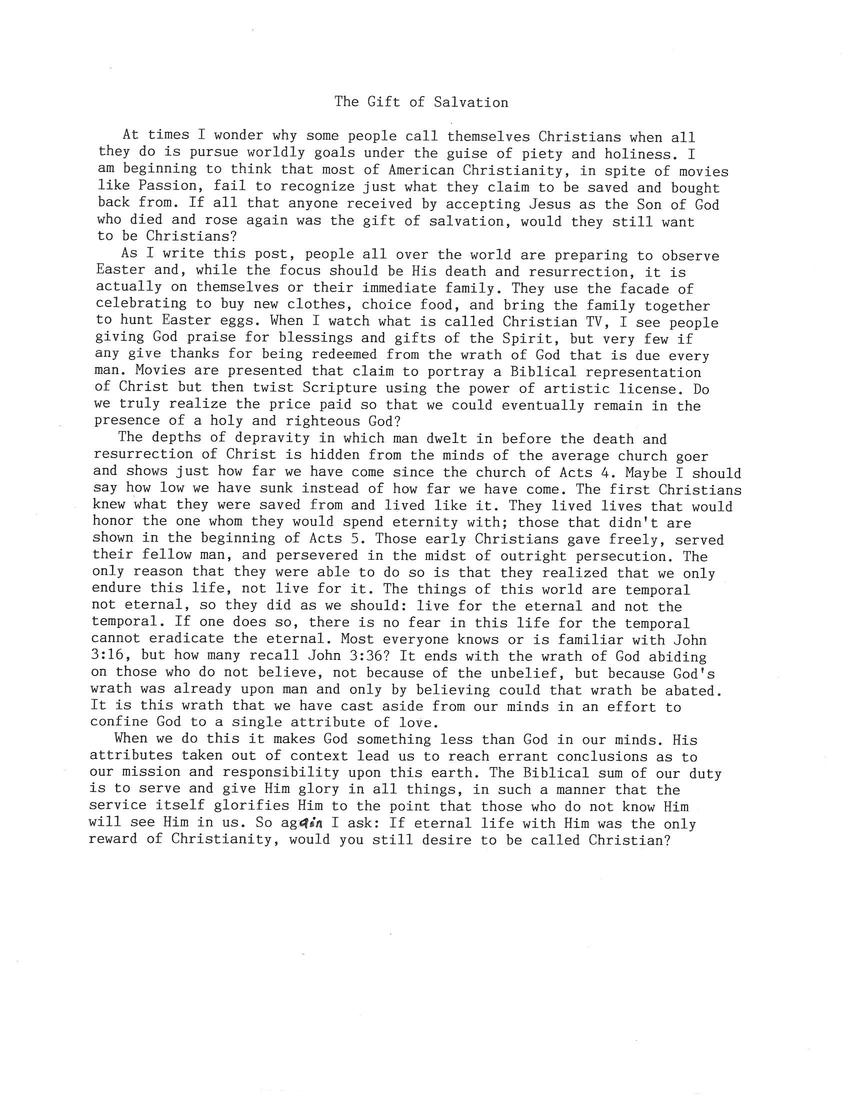 The Gift of Salvation

At times I wonder why some people call themselves Christians when all they do is pursue worldy goals under the guise of piety and holiness. I am beginning to think that most of American Christianity, in spite of movies like 'Passion...', fail to recognize just what they claim to be saved and brought back from. If all that anyone received by accepting Jesus as the Son of God who died and rose again was the gift of salvation, would they still want to be Christians?

As I write this post, people all over the world are preparing Easter and, while the focus should be His death and resurrection, it is actually on themselves or their immediate family. They use the facade of celebrating to buy new clothes, choice food, and bring the family together to hunt Easter eggs. When I watch what is called Christian TV, I see people giving God praise for blessings and gifts of the Spirit, but very few, if any, give thanks for being redeemed from the wrath of God that is due every man. Movies are presented that claim to portray a biblical representation of Christ but then twist scripture using the power of artistic license. Do we truly realize the price paid so that we could eventually remain in the presence of a holy and righteous God?

The depths of depravity in which man dwelt in before the death and resurrection of Christ is hidden from the minds of the average church goer and shows just how far we have come since the church of Act 4. Maybe I should say how low we have sunk instead of how far we have come. The first Christians knew what they were saved from and lived like it. They lived lives that would honor the one of whom they would spend eternity with; those that didn't are shown in the beginning of Act 5. Those early Christians gave freely, served their fellow man, and persevered in the midst of outright persecution. The only reason that they were able to do so is that they we realized that we only endure this life, not live for it. The things of this world are temporal, not eternal, so they did as we should: live for the eternal and not the temporal. If one does so, there is no fear in this life for the temporal cannot eradicate the eternal. Most everyone knows or is familiar with John 3:16, but how many recall John 3:36? It ends with the wrath of God abiding on those who do not believe, not because of the unbelief, but because God's wrath was already upon man and only be believing could that wrath be abated. It is this wrath that we have cast aside from our minds in an effort to confine God to a single attribute of love.

When we do this it makes God something less than God in our minds. His attributes taken out of context lead us to reach errant conclusions as to our mission and responsibility upon this earth. The biblical sum of our duty is to serve and give Him glory in all things, in such a manner that the service itself glorifies Him to the point that those who do not know Him will see Him in us. So again I ask: If eternal life with Him was the only reward of Christianity, would you still desire to be called a Christian?