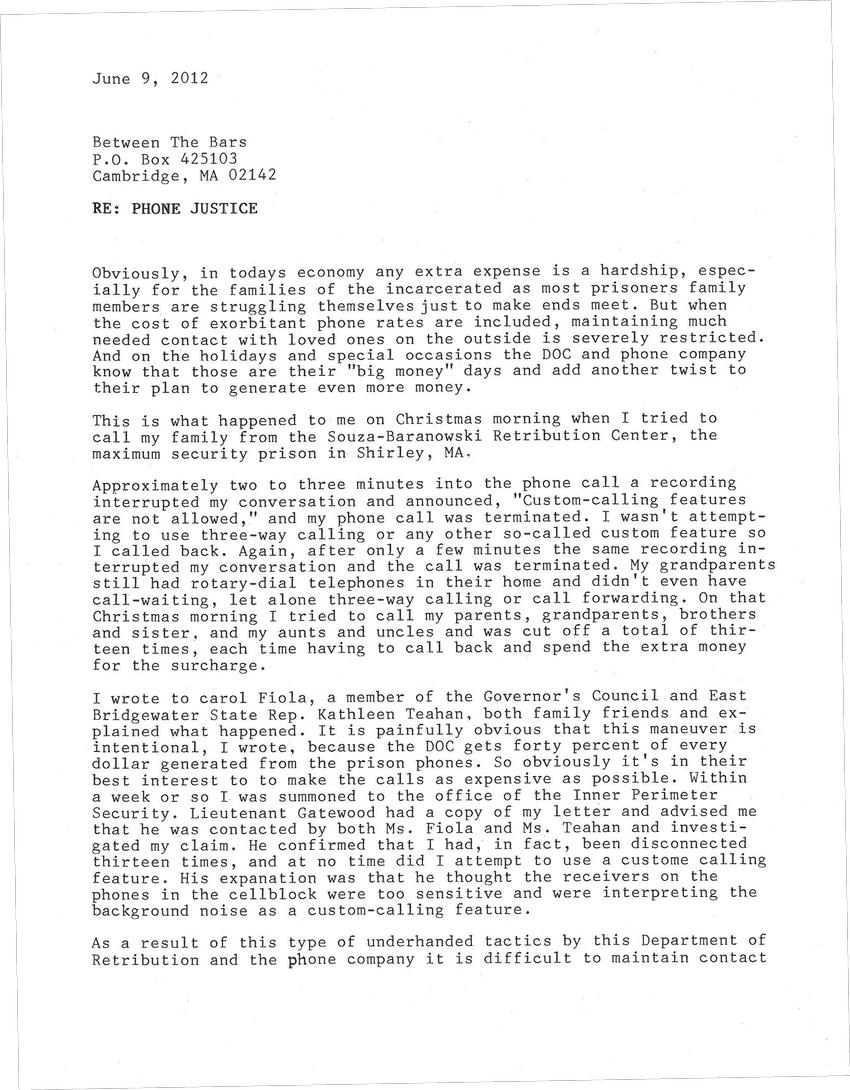 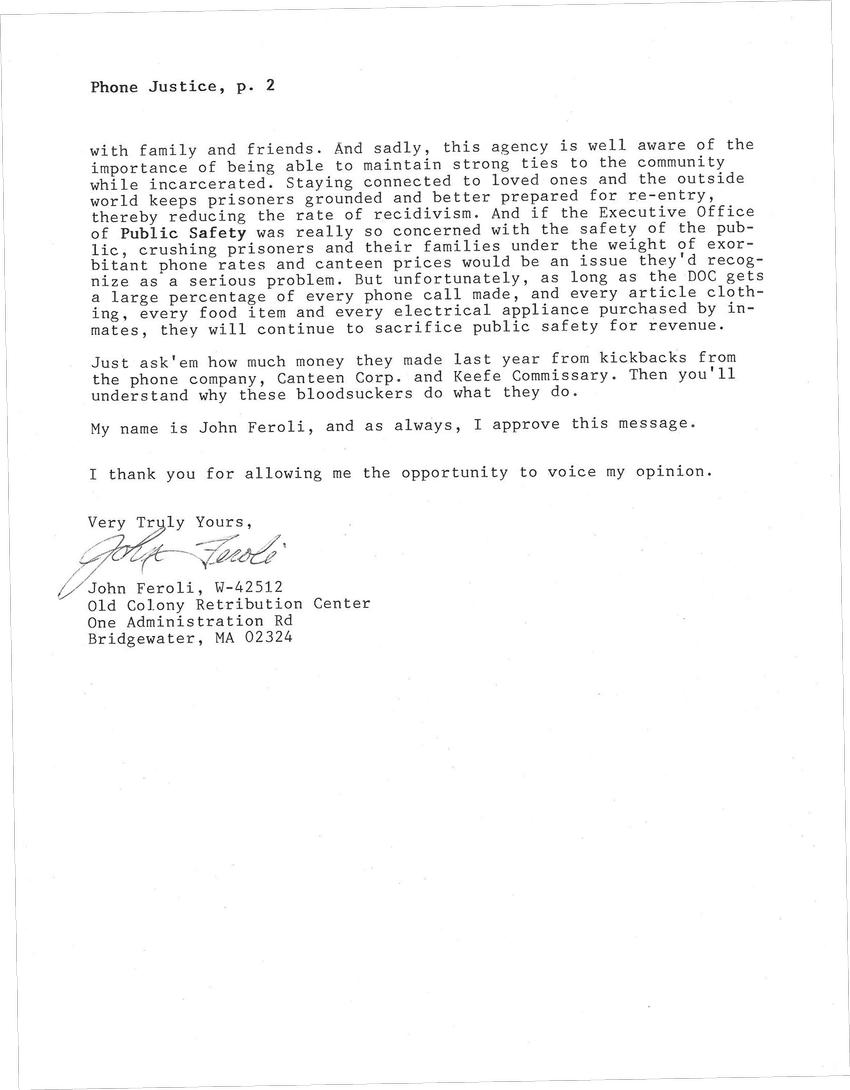 Obviously, in today's economy any extra expense is a hardship, especially for the families of the incarcerated as most prisoners' family members are struggling themselves just to make ends meet. But when the cost of exorbitant phone rates are included, maintaining much needed contact with loved ones on the outside is severely restricted. And on the holidays and special occasions the DOC and phone company know that those are their "big money" days and ass another twist to their plan to generate even more money.

This is what happened to me on Christmas morning when I tried to call my family from the Souza-Baranowski Retribution Center, the maximum security prison in Shirley, MS.

Approximately two to three minutes into the phone call a recording interrupted my conversation and announced, "Custom-calling features are not allowed," and my phone call was terminated. I wasn't attempting to use three-way calling or any other so-called custom features. I called back. Again, after only a few minutes the same recording interrupted my conversation and the call was terminated. My grandparents still had rotary-dial telephones in their home and didn't even have call-waiting, let alone three-way calling or call forwarding. On the Christmas morning I tried to call my parents, grandparents, brothers and sister, and my aunt and uncles and was cut off a total of thirteen times, each time having to call back and spend the extra money for the surcharge.

I wrote to Carol Fiola, a member of the Governor's Council and East Bridgewater State Rep. Kathleen Teahan, both family friends and explained what happened. It is painfully obvious that this maneuver intentional, I wrote, because the DOC gets forty percent of every dollar generated from the prison phones. So obviously it's in their best interest to make the calls as expensive as possible. Within a week or so I was summoned to the office of the Inner Perimeter Security. Lieutenant Gatewood had a copy of my letter and advised me that he was contacted by both Ms. Fiola and Ms. Teahan and investigated my claim. He confirmed that I had, in fact, been disconnected thirteen times, and at no time did I attempt to use a custom call feature. His explanation was that he though the receivers on the phones in the cellblock were too sensitive and were interpreting the background noise as a custom-calling feature.

As a result of this type of underhanded tactics by this Department of Retribution and the phone company it is difficult to maintain contact with family and friends. And sadly, this agency is well aware of the importance of being able to maintain strong ties to the community while incarcerated. Staying connected to loved ones and the outside world keeps prisoners grounded and better prepared for re-entry, thereby reducing the rate of recidivism. And if the Executive Office of Public Safety was really so concerned with the safety of the public, crushing prisoners and their families under the weight of exorbitant phone rates and canteen prices would be an issue they'd recognize as a serious problem. But unfortunately, as long as the DOC gets a large percentage of every phone call made, and every article of clothing, every food item and every electrical appliance purchased by inmates, they will continue to sacrifice public safety for revenue.

Just ask 'em how much money they made last year from kickbacks from the phone company, Canteen Corp. and Keefe Comissary. Then you'll understand why these bloodsuckers do what they do.

My name is John Feroli, and as always, I approve this message.

I thank you for allowing me the opportunity to voice my opinion.

Where the prison phone system has for years been a source of problems, intentionally caused and otherwise, and much frustration, it's a damn shame that no one seems to give a damn, or ever really attempts to make it better.
Even the phone sound system is bad. I get several calls from friends in prison and along with the real and ongoing problem of getting initially connected, once connected it is more often than not very difficult hearing and understanding the caller. So much is wrong with the phone system as to almost be criminal. John is 100% on point with this.
Hi, John

I am writing to let you know about Prison Action News, a biannual journal of prisoners' stories of resistance to incarceration. Written by prisoners and edited and distributed by outside volunteers, PAN has about 1,600 incarcerated subscribers across the US. It is a great outlet to both read and publish stories about fighting exorbitant phone prices, or any other oppressive aspect of prison life. If you would like a free subscription to PAN, write to:

PAN
PO Box 832
Watertown, MA 02472
Hi John, This is Dianna Wentworth Hauf - I found some writings of yours here on betweenthebars. It would be nice to contact you, but I'm not sure how to do that. Perhaps this will get through to you.
Blessings to you & yours,
Dianna
Hi John,

This is Joanne Davis. Since Jeannine passed I have had no news on how you are doing. So how are you? We have lost so many of the old gang. I miss Jeannine every day she was such a great friend. I Don't know if you will ever get this. I was cleaning my desk at work and just came across the contact info.