Interview: History of the Massachusetts Advisory Council on Correction 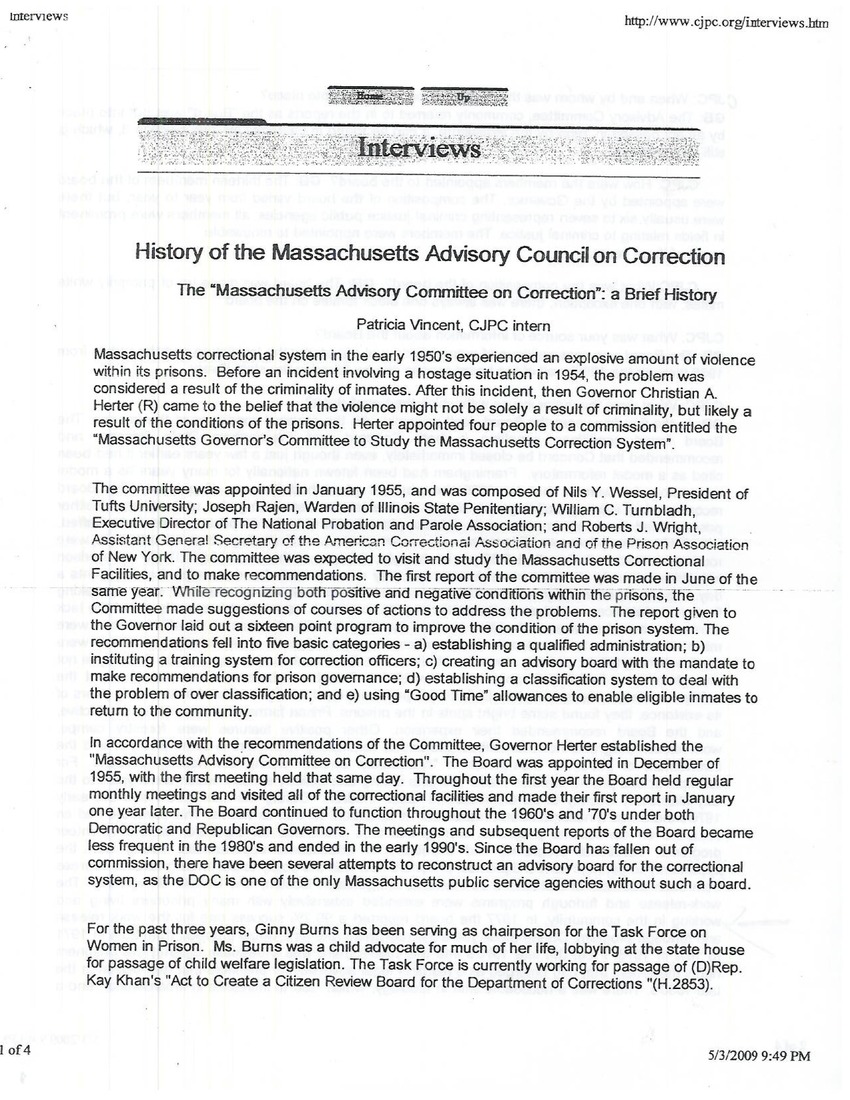 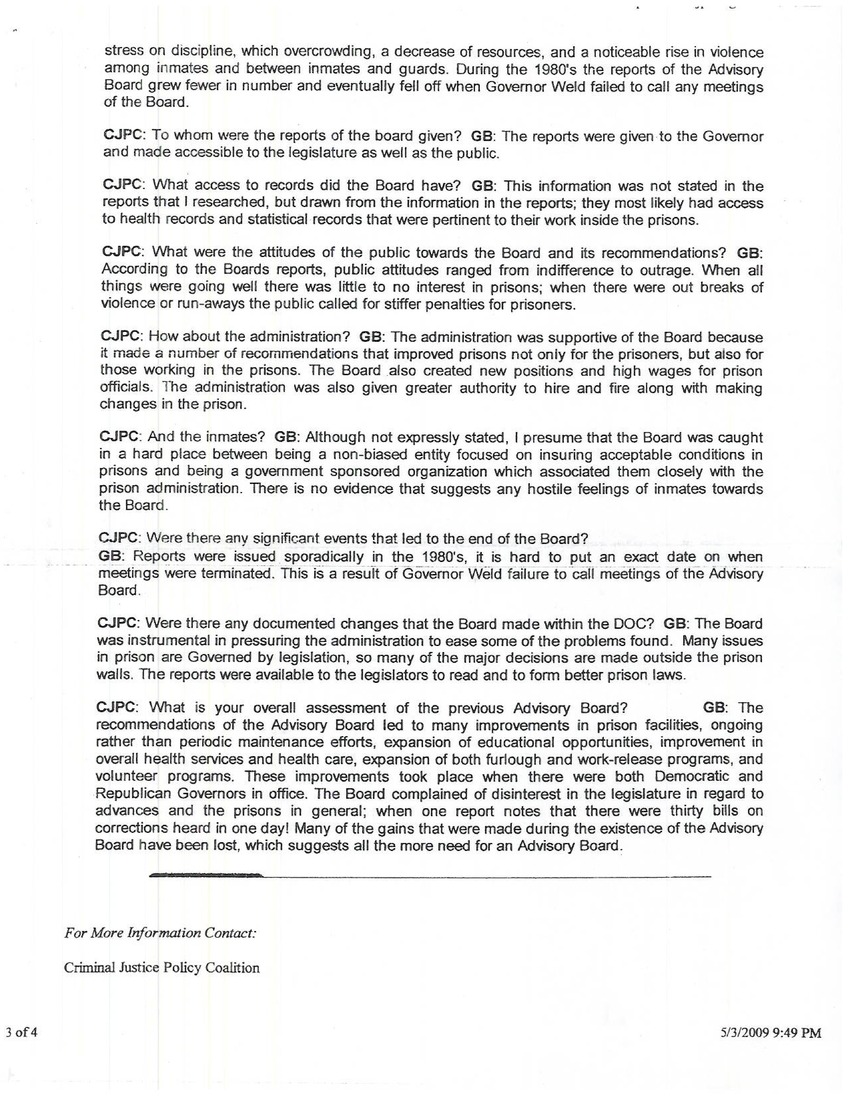 History of the Massachusetts Advisory Council on Correction

The “Massachusetts Advisory Committee on Correction”: a Brief History

Massachusetts correctional system in the early 1950’s experienced an explosive amount of violence within its prisons. Before an incident involving a hostage situation in 1954, the problem was considered a result of the criminality of inmates. After this incident, then Governor Christian A. Herter (R) came to the belief that the violence might not be solely a result of criminality, but likely a result of the conditions of the prisons. Herter appointed four people to a commission entitled the “Massachusetts Governor’s Committee to Study the Massachusetts Correction System”.

The committee was appointed in January 1955, and was composed of Nils Y. Wessel, President of Tufts University; Joseph Rajen, Warden of Illinois State Penitentiary; William C. Turnbladh, Executive Director of The National Probation and Parole Association; and Roberts J. Wright, Assistant General Secretary of the American Correctional Association and of the Prison Association of New York. The committee was expected to visit and study the Massachusetts Correctional Facilities, and to make recommendations. The first report of the committee was made in June of the same year. While recognizing both positive and negative conditions within the prisons, the Committee made suggestions of courses of actions to address the problems. The report given to the Governor laid out a sixteen point program to improve the condition of the prison system. The recommendations fell into five basic categories - a) establishing a qualified administration; b) instituting a training system for correction officers; c) creating an advisory board with the mandate to make recommendations for prison governance; d) establishing a classification system to deal with the problem of over classification; and e) using “Good Time” allowances to enable eligible inmates to return to the community.

In accordance with the recommendations of the Committee, Governor Herter established the "Massachusetts Advisory Committee on Correction". The Board was appointed in December of 1955, with the first meeting held that same day. Throughout the first year the Board held regular monthly meetings and visited all of the correctional facilities and made their first report in January one year later. The Board continued to function throughout the 1960's and ’70's under both Democratic and Republican Governors. The meetings and subsequent reports of the Board became less frequent in the 1980's and ended in the early 1990's. Since the Board has fallen out of commission, there have been several attempts to reconstruct an advisory board for the correctional system, as the DOC is one of the only Massachusetts public service agencies without such a board.

For the past three years, Ginny Burns has been serving as chairperson for the Task Force on Women in Prison. Ms. Burns was a child advocate for much of her life, lobbying at the state house for passage of child welfare legislation. The Task Force is currently working for passage of (D)Rep. Kay Khan's "Act to Create a Citizen Review Board for the Department of Corrections "(H.2853).

CJPC: What was the composition of the board?
GB: The board was made up of primarily white males, with one exception; there was always one black female on the board.

CJPC: What was your source of information about the Board?
GB: The Board was conscientious of preparing annual reports for the legislature and the public from 1956 through the 1980's; all of the board reports can be found in the state library.

CJPC: What were the major issues with which the board dealt?
GB: In the first few years the Board dealt primarily with the physical conditions of the prisons. The Board found conditions appalling in both Concord and Framingham State Prisons, and recommended that Concord be closed immediately, even though just a few years earlier it had been cited as a model reformatory. Framingham had been known nationally for many years as a model reformatory for women, but by 1956 the physical plant had become dilapidated. The Board recommended existing buildings be closed and extensive remodeling be undertaken. Neither prison closed down, but improvements did take place inside of both. All prisons were understaffed, but at the state prison at Bridgewater, there was such a staff shortage that all prisoners were routinely locked in their cell at 5:30 pm each night, the end of their work day. There were prison industries in nearly all of the state prisons, but they were all limited and underpaid at fifty cents a day. Prisoners performed jobs that did not compete in the market with labor unions, such as making flags and state license plates. In the earlier reports, concerns were raised frequently about the lack of resources and services at facilities to meet the basic needs of prisoners. Health services were minimal and there was a dearth of educational opportunities. In some institutions there were nonfunctioning toilets, cooking stoves and boilers that didn't work, and in some cases there were not enough beds or bedding to go around. Overall the Board members were concerned about the safety of both prisoners and staff. Despite the problems reported by the Board in the early years of its existence, they found some bright spots in the prisons. Prison farms were seen to be productive, and the Board recommended their expansion. Other positive features were forestry camps, work-release programs however limited, the use of community volunteers in some prisons, and the involvement of prisoners themselves in "community service" during the holiday seasons. For example at one prison, inmates made 150 gifts during one holiday season which were given to the City Missionary Society to be distributed to "poor children." During the late 1960's and the early 1970's there was a national reform movement for offenders as well as victims. This pressure had an influence on correctional programs. During this time there was an expansion of the volunteer programs, vocational programs, and especially of educational opportunities. Along with the opportunity to get high school diplomas, prisoners now had the ability to get undergraduate degrees from such educational institutions as Harvard, Bridgewater, Boston, and Suffolk Universities. The work-release and furlough programs were extended extensively with many prisoners living and working in the community. In 1977 the board reported a 99.2% success rate for the work release and furlough program. During these years the recidivism rate as a whole dropped from 25% in 1971 to 16% in 1978. From the late 1970's into the 1980's there was a backlash against the prisoners rights movement that had emerged as a result of legal advocacy for prisoners that had begun in the late 1960's. There was a noticeable shift in ideology, which lead to increases in incarceration and a stress on discipline, which overcrowding, a decrease of resources, and a noticeable rise in violence among inmates and between inmates and guards. During the 1980's the reports of the Advisory Board grew fewer in number and eventually fell off when Governor Weld failed to call any meetings of the Board.

CJPC: To whom were the reports of the board given?
GB: The reports were given to the Governor and made accessible to the legislature as well as the public.

CJPC: What access to records did the Board have?
GB: This information was not stated in the reports that I researched, but drawn from the information in the reports; they most likely had access to health records and statistical records that were pertinent to their work inside the prisons.

CJPC: What were the attitudes of the public towards the Board and its recommendations?
GB: According to the Boards reports, public attitudes ranged from indifference to outrage. When all things were going well there was little to no interest in prisons; when there were out breaks of violence or run-aways the public called for stiffer penalties for prisoners.

CJPC: And the inmates?
GB: Although not expressly stated, I presume that the Board was caught in a hard place between being a non-biased entity focused on insuring acceptable conditions in prisons and being a government sponsored organization which associated them closely with the prison administration. There is no evidence that suggests any hostile feelings of inmates towards the Board.

CJPC: Were there any significant events that led to the end of the Board?
GB: Reports were issued sporadically in the 1980's, it is hard to put an exact date on when meetings were terminated. This is a result of Governor Weld failure to call meetings of the Advisory Board.

CJPC: Were there any documented changes that the Board made within the DOC?
GB: The Board was instrumental in pressuring the administration to ease some of the problems found. Many issues in prison are Governed by legislation, so many of the major decisions are made outside the prison walls. The reports were available to the legislators to read and to form better prison laws.

CJPC: What is your overall assessment of the previous Advisory Board?
GB: The recommendations of the Advisory Board led to many improvements in prison facilities, ongoing rather than periodic maintenance efforts, expansion of educational opportunities, improvement in overall health services and health care, expansion of both furlough and work-release programs, and volunteer programs. These improvements took place when there were both Democratic and Republican Governors in office. The Board complained of disinterest in the legislature in regard to advances and the prisons in general; when one report notes that there were thirty bills on corrections heard in one day! Many of the gains that were made during the existence of the Advisory Board have been lost, which suggests all the more need for an Advisory Board.