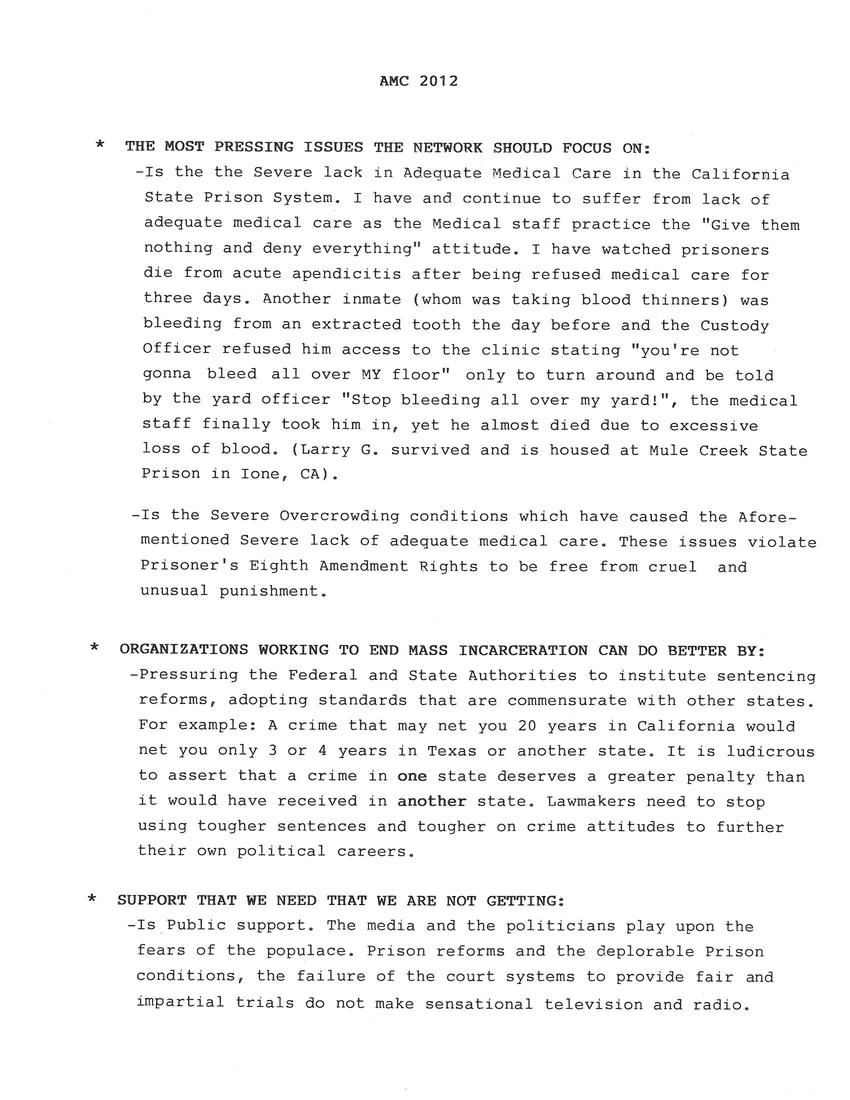 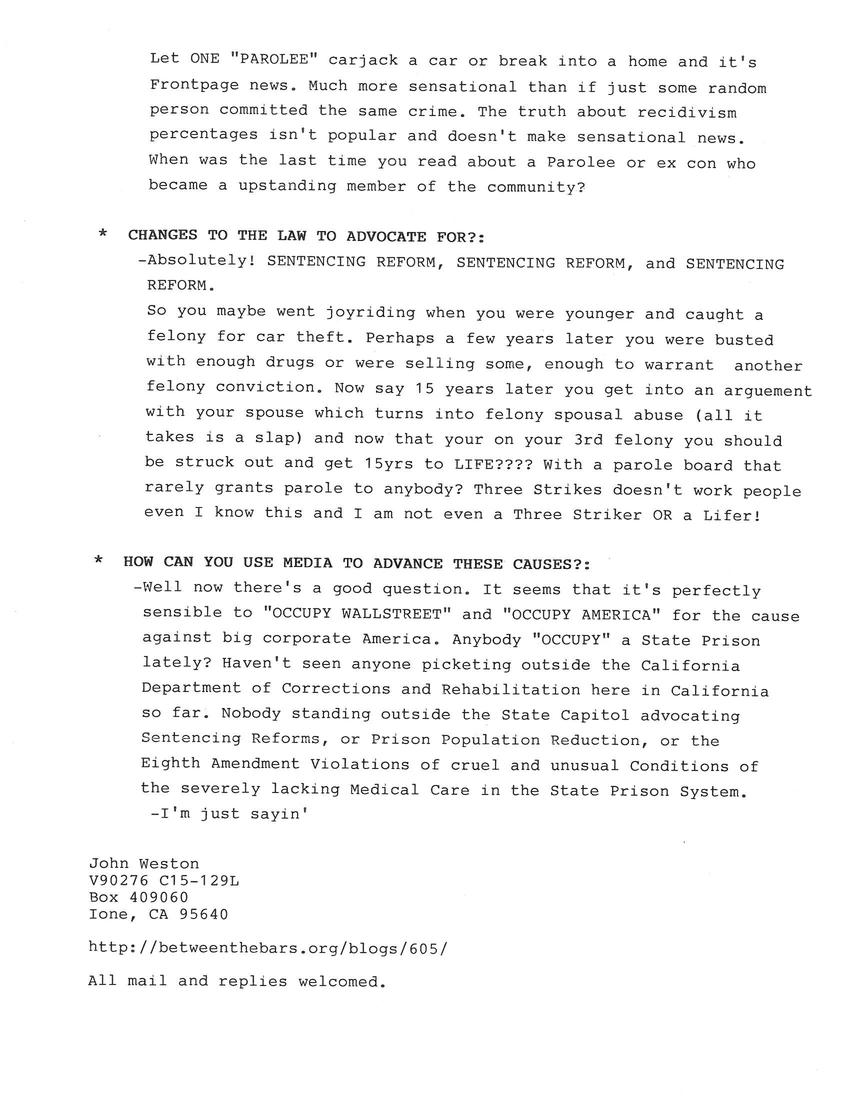 * THE MOST PRESSING ISSUES THE NETWORK SHOULD FOCUS ON:
-Is the severe lack in Adequate Medical Care in the California State Prison System. I have and continue to suffer from lack of adequate medical care as the Medical staff practice the "Give them nothing and deny everything" attitude. I have watched prisoners die from acute appendicitis after being refused medical care for three days. Another inmate (who was taking blood thinners) was bleeding from an extracted tooth the day before and the Custody Officer refused him access to the clinic stating "you're not gonna bleed all over MY floor" only to turn around and be told by the yard officer "Stop bleeding all over my yard!", the medical staff finally took him in, yet he almost died due to excessive loss of blood. (Larry G. survived and is housed at Mule Creek State Prison in Ione, CA).

-Is the Severe Overcrowding conditions which have caused the Aforementioned Severe lack of adequate medical care. These issues violate Prisoners' Eighth Amendment Rights to be free from cruel and unusual punishment.

* ORGANIZATIONS WORKING TO END MASS INCARCERATION CAN DO BETTER BY:
-Pressuring the Federal and State Authorities to institute sentencing reforms, adopting standards that are commensurate with other states. For example: A crime that may net you 20 years in California would net you only 3 or 4 in Texas or another state. It is ludicrous to assert that a crime in one state deserves a greater penalty than it would have received in another state. Lawmakers need to stop using tougher sentences and tougher on crime attitudes to further their own political careers.

* SUPPORT THAT WE NEED THAT WE ARE NOT GETTING:
-Is Public support. The media and the politicians play upon the fears of the populace. Prison reforms and the deplorable Prison conditions, the failure of the court systems to provide fair and impartial trials do not make sensational television and radio.

Let ONE "PAROLEE" carjack a car or break into a home and it's Frontpage news. Much more sensational than if just some random person committed the same crime. The truth about recidivism percentages isn't popular and doesn't make sensational news. When was the last time you read about a Parolee or ex con who became an upstanding member of the community?

So you maybe went joyriding when you were younger and caught a felony for car theft. Perhaps a few years later you were busted with enough drugs or were selling some, enough to warrant another felony conviction. Now say 15 years later you get into an argument with your spouse which turns into felony spousal abuse (all it takes is a slap) and now that you're on your 3rd felony you should be struck out and get 15yrs to LIFE???? With a parole board that rarely grants parole to anybody? Three Strikes doesn't work, people, even I know this and I am not even a Three Striker OR a Lifer!

* HOW CAN YOU USE MEDIA TO ADVANCE THESE CAUSES?:
-Well now there's a good question. It seems that it's perfectly sensible to "OCCUPY WALL STREET" and "OCCUPY AMERICA" for the cause against big corporate America. Anybody "OCCUPY" a State Prison lately? Haven't seen anyone picketing outside the California Department of Corrections and Rehabilitation here in California so far. Nobody standing outside the State Capitol advocating Sentencing Reforms, or Prison Population Reduction, or the Eighth Amendment Violations of cruel and unusual Conditions of the severely lacking Medical Care in the State Prison System. -I'm just sayin'

All mail and replies welcomed.