Give Me Liberty of Give Me Death 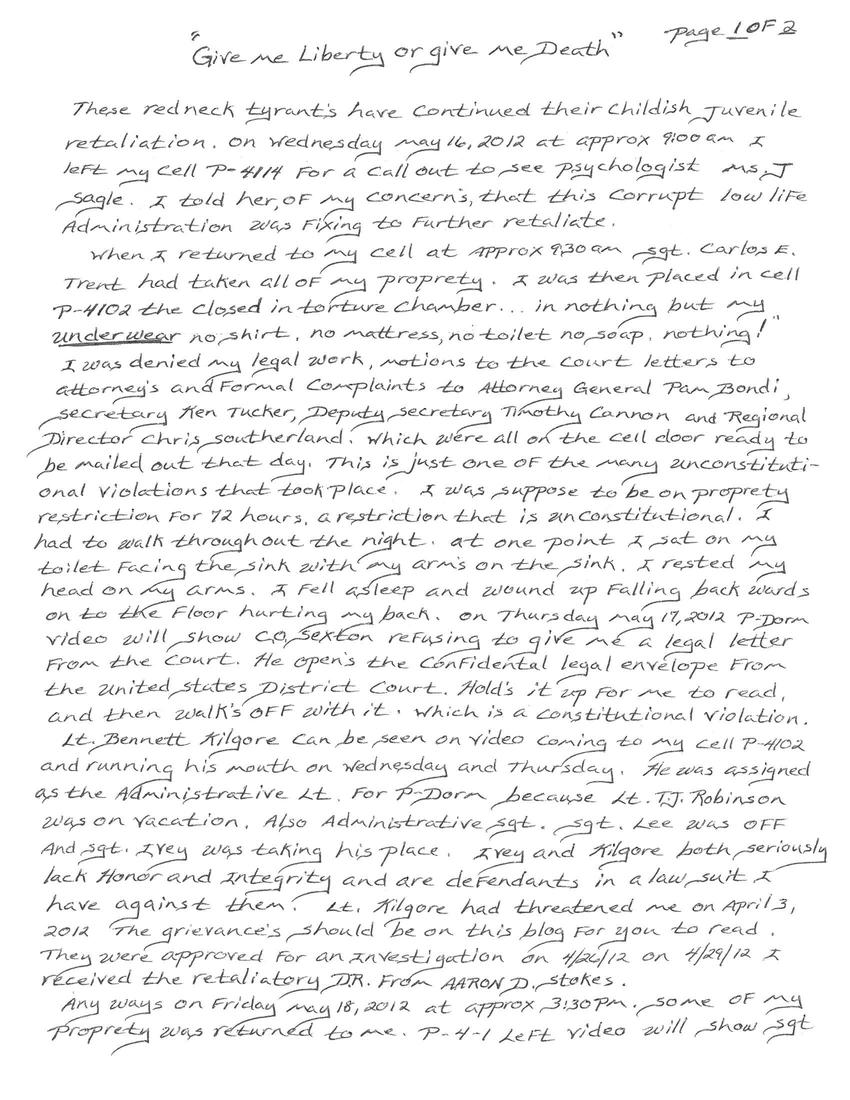 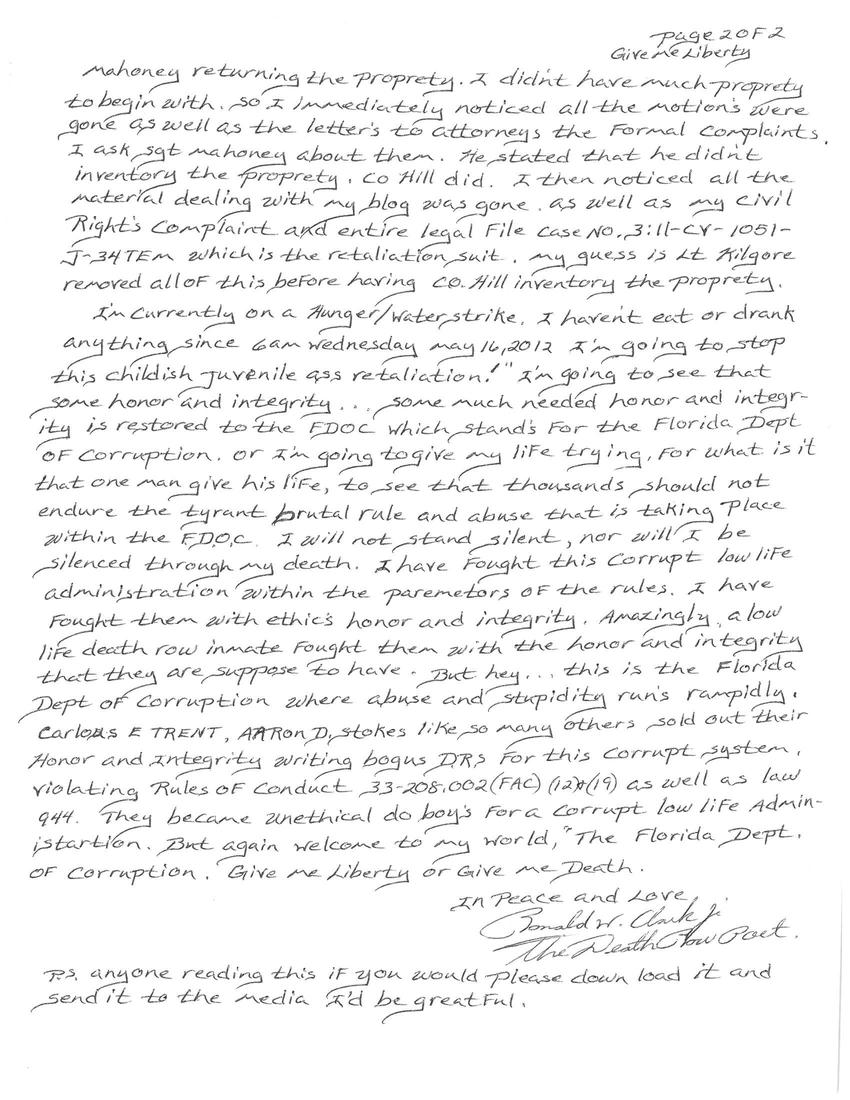 "GIVE ME LIBERTY OR GIVE ME DEATH"

These red neck tyrants have continued their childish Juvenile retaliation. On Wednesday May 16, 2012 at approx 9:00am I left my cell P-4114 for a call out to see Psychologist Ms J Sagle. I told her of my concerns that this corrupt low life administration was fixing to further retaliate.

When I returned to my cell at approx 9.30am Sgt Carlos E Trent had taken all of my property. I was then placed in cell P-4102, the closed in torture chamber... in nothing but my UNDERWEAR, no shirt, no mattress, no toilet, no soap, nothing!

I was denied my legal work, motions to the court, letters to attorneys and formal complaints to Attorney General Pam Bondi, Secretary Ken Tucker, Deputy Secretary Timothy Cannon and Regional Director Chris Southerland, which were all on the cell door ready to be mailed out that day. This is jut one of the many unconstitutional violations that took place. I was supposed to be on property restriction for 12 hours, a restriction that is unconstitutional. I had to walk through out the night. At one point I sat on my toilet facing the sink with my arms on the sink. I rested my head on my arms. I fell asleep and would up falling backwards on to the floor, hurting my back. On Thursday May 17, 2012 P-dorm video will show CO Sexton refusing to give me a legal letter from the court. He opens the confidential legal envelope from the United States District Court. Holds it up for me to read, and then walks off with it which is a constitutional violation.

Lt Bennett Kilgore can be seen on video coming to my cell P-4102 and running his mouth on Wednesday and Thursday. He was assigned as the Administrative Lt for P-dorm because Lt T J Robinson was on vacation. Also Administrative Sgt, Sgt Lee was off and Sgt Ivey was taking his place. Ivey and Kilgore both seriously lack honor and integrity and are defendants in a law suit I have against them. Lt Kilgore had threatened me on April 3, 2012 the grievances should be on this blog for you to read. They were approved for an investigation on 4/26/12 I received the retaliatory DR from Aaron D. Stokes.

Anyways on Friday May 18, 2012 at approx 3.30pm some of my property was returned to me. P-4-1 left video will show Sgt Mahoney returning the property. I didn't have much property to begin with. So I immediately noticed all the motions were gone,as well as the letters to attorneys, the formal complaints. I ask Sgt Mahoney about them. He stated that he didn't inventory the property, CO Hill did. I then noticed all the material dealing with my blog was gone, as well as my civil rights complaint and entire legal file case no. 3:11-CV-1051-J-34TEM, which is the retaliation suit. My guess is Lt Kilgore removed all of this before having CO Hill inventory the property.

I'm currently on hunger/water strike. I haven't eat or drank anything since 6am Wednesday May 16, 2012. I'm going to stop this childish juvenile ass retaliation! I'm going to see that some honor and integrity... some much needed honor and integrity is restored to the FDOC, which stands for the Florida Dept of Corruption. Or I'm going to give my life trying. For what is it that one man give his life, to see that thousands should not endure the tyrant brutal rule and abuse that is taking place within the FDOC. I will not stand silent, nor will I be silenced through my death. I have fought this corrupt low life administration within the parameters of the rules. I have fought them with ethics, honor and integrity. Amazingly, a low life death row inmate fought them with the honor and integrity that they are supposed to have. But hey... this is the Florida Dept of Corruption where abuse and stupidity runs rampantly. Carlos E Trent, Aaron D. Stokes, like so many others, sold out their honor and integrity writing bogus DRs for this corrupt system, violating rules of conduct 33-208.002 (FAC) (12) + (19), as well as law 944. They became unethical do boys for a corrupt low life administration. But again, welcome to my world, the Florida Dept. of Corruption. Give me liberty or give me death.

P.S. Anyone reading this, if you would please download it and send it to the media, I'd be grateful.