In Country Day One 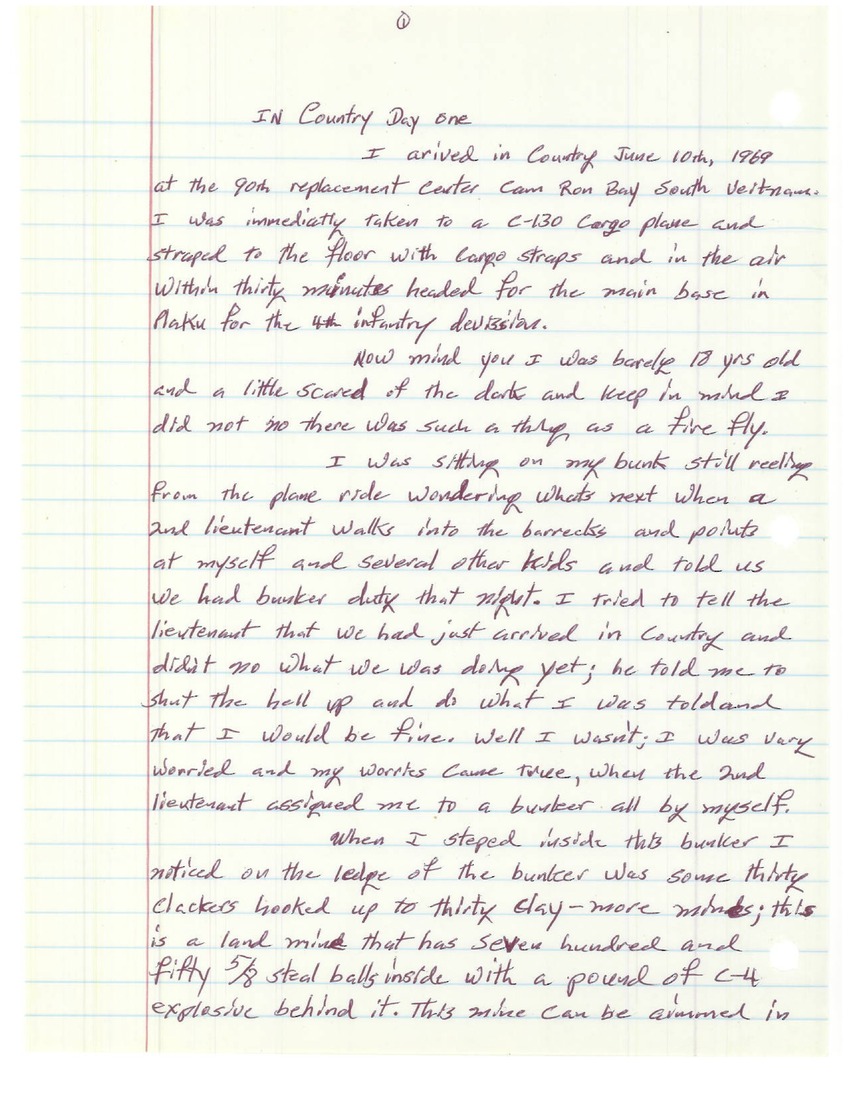 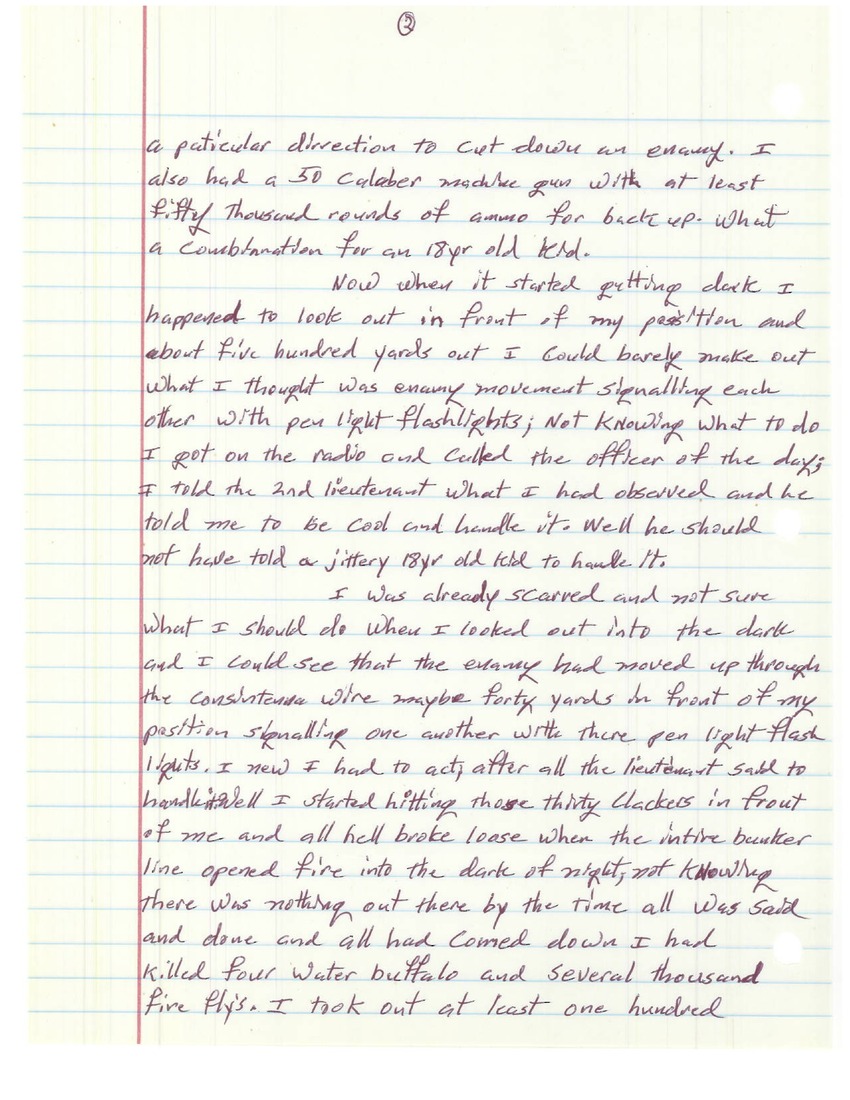 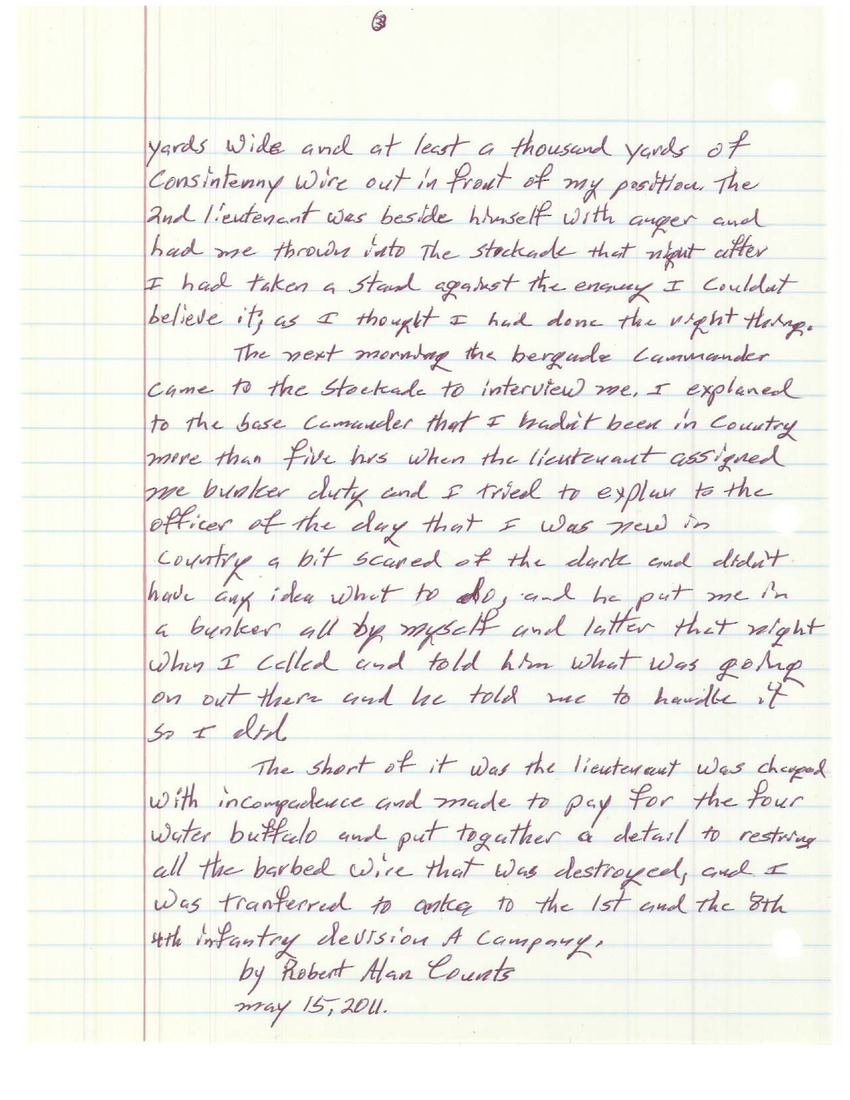 In Country, Day One

I arrived in Country June 10th, 1969 at the 90th replacement center Cam Ron Bay South Vietnam. I was immediately taken to a C-130 cargo plane and strapped to the floor with cargo straps. I was in the air within thirty minutes, headed for the main base in Plaku for the 4th infantry devisions.

Now mind you, I was barely 18 years old and a little scared of the dark. And keep in mind, I did not know there was such a thing as a firefly.

I was sitting on my bunk still reeling from the plane ride wondering what's next when a 2nd lieutenant walks into the barracks and points at myself and several other kids, and they told us we had bunker duty that night. I tried to tell the lieutenant that we had just arrived in County and didn't know what we were doing yet. He told me to shut the hell p and do what I was told, and that I would be fine.

Well, I wasn't. I was very worried, and my worries came true when the 2nd lieutenant assigned me to a bunker all by myself.

When I stopped inside this bunker, I noticed on the ledge of the bunker was some thirty clackers hooked up to thirty clay—more mines. This is a land mine that has seven hundred and fifty 5/8 steel balls inside a pound of C-4 explosive behind it. This mine can be aimed in a particular direction to cut down an enemy. I also had a 50 caliber machine gun with at least fifty thousand rounds of ammo for backup. What a combination for an 18-year-old kid.

Now, when it started getting dark, I happened to look out in front of. My position and about five hundred yards out, I could barely make out what I thought was enemy movement signaling each other with pen light flashlights. Not knowing what to do, I got on the radio and called the officer of the day. I told the 2nd lieutenant what I had observed, and he told me to be cool and handle it.

Well, he should not have told a jittery 18-year-old kid to "handle it." I was already scared and not sure what I should do when I looked out into the dark. I could see that the enemy had moved up through the consintenny wire maybe forty yards in front of my position, signaling one another with their pen light flashlights. I knew I had to act. After all, the lieutenant said to handle it.

Well, I started hitting those thirty clackers in front of me and all hell broke loose when the entire bunker line opened fire into the dark of the night, not knowing there was nothing out there. By the time all was said and done, and all had calmed down, I had killed four water buffalo and several thousand fireflies. I took out at least one hundred yards wide and at least a thousand yards of consintenny wire out in front of my position.

The second lieutenant was beside himself with anger and had me thrown into the stockade that night. After I had taken a stand against the enemy, I couldn't believe it. I thought I had done the right thing.

The next morning, the brigade commander came to the stockade to interview me. I explained to the base commander that I hadn't been in the country more than five hours when the lieutenant assigned me bunker duty. I tried to explain to the officer of the day that i was new in the country, a bit scared of the dark, and didn't have any idea what to do. He put in a bunker all by myself and later that night, when I called and told him what was going on out there, he told me to handle it. So I did.

The short of it was the lieutenant was charged with incompetence and made to pay for the four water buffalo and put together a detail to restoring all the barbed wire that was destroyed. I was transferred to antca too the 1st, 8th, and 4th infantry division A company.