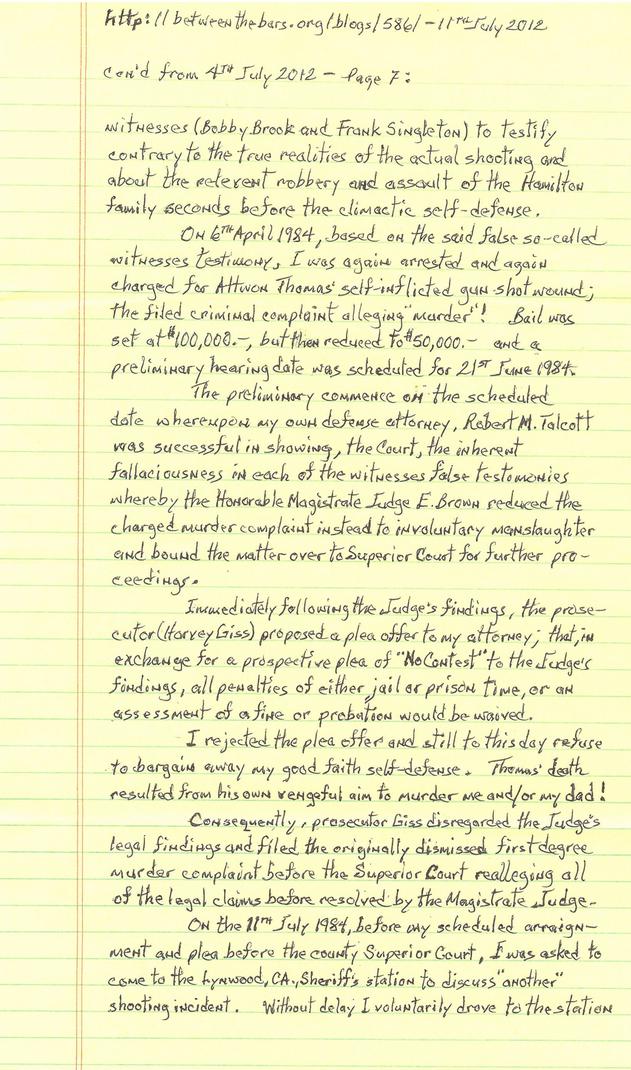 witnesses (Bobby Brook and Frank Singleton) to testify contrary to the true realities of the actual shooting and about the relevant robbery and assault of the Hamilton family seconds before the climactic self-defense.

On 6th April 1984, based on the said false so-called witnesses' testimony, I was again arrested and again charged for Attwon Thomas' self-inflicted gun-shot wound; the filed criminal complaint alleging "murder"! Bail was set at #100,000 - but then reduced t #50,000 - and a preliminary hearing date was scheduled for 21st June 1984.

The preliminary commence on the scheduled date whereupon my own defense attorney, Robert M Talcott was successful in showing, the court, the inherent fallaciousness in each of the witnesses false testimonies whereby the Honorable Magistrate Judge E Brown reduced the charged murder complaint instead to involuntary manslaughter and bound the matter over to Superior Court for further proceedings.

Immediately following the Judge's findings, the prosecutor (Harvey Giss) proposed a plea offer to my attorney, that in exchange for a prospective plea of "No Contest" to the Judge's findings, all penalties of either jail or prison time, or an assessment of a fine or probation would be waived.

I rejected the plea offer and still to this day refuse to bargain away my good faith self-defense. Thomas' death resulted from his own vengeful aim to murder me and/ or my Dad!

Consequently, prosecutor Giss disregarded the Judge's legal findings and filed the originally dismissed first degree murder complaint before the Superior Court, realleging all of the legal claims before resolved by the Magistrate Judge.

On the 11th July 1984, before my scheduled arraignment and plea before the county Superior Court, I was asked to come to the Lynwood, CA., Sheriff's station to discuss "another" shooting incident. Without delay I voluntarily drove to the station