In the Interest Of Justice 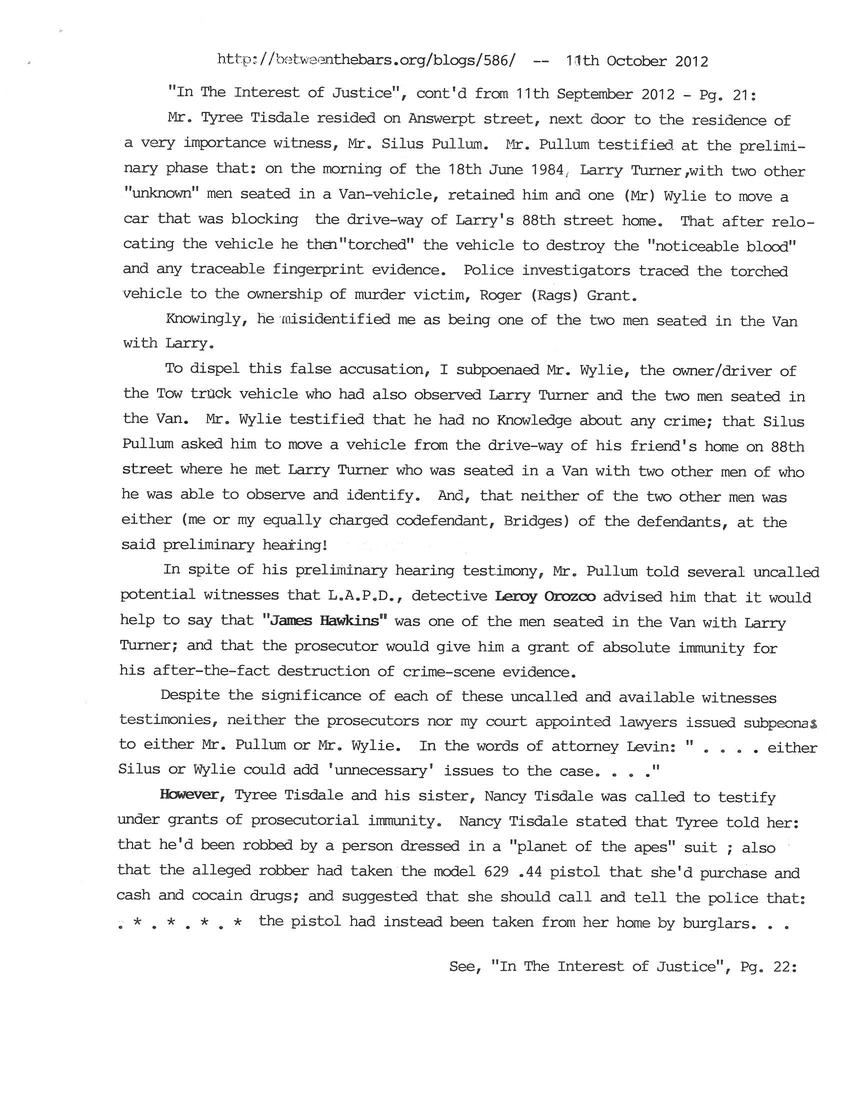 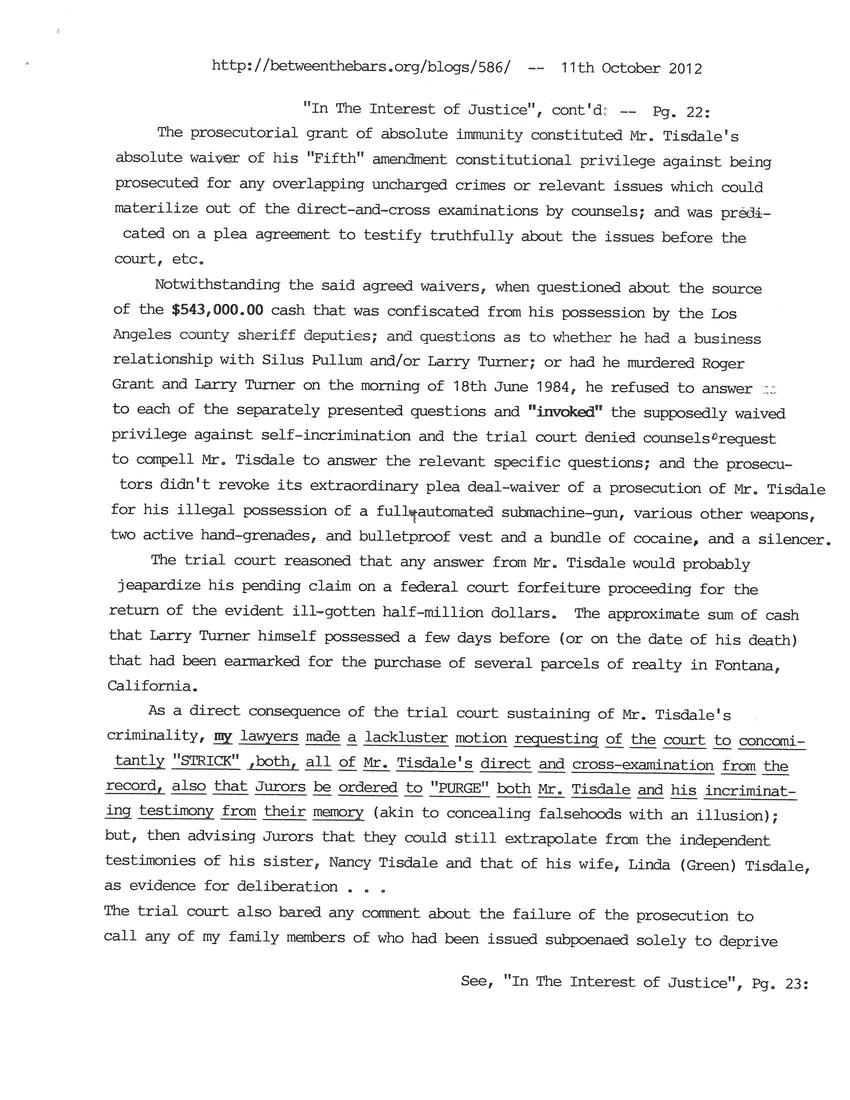 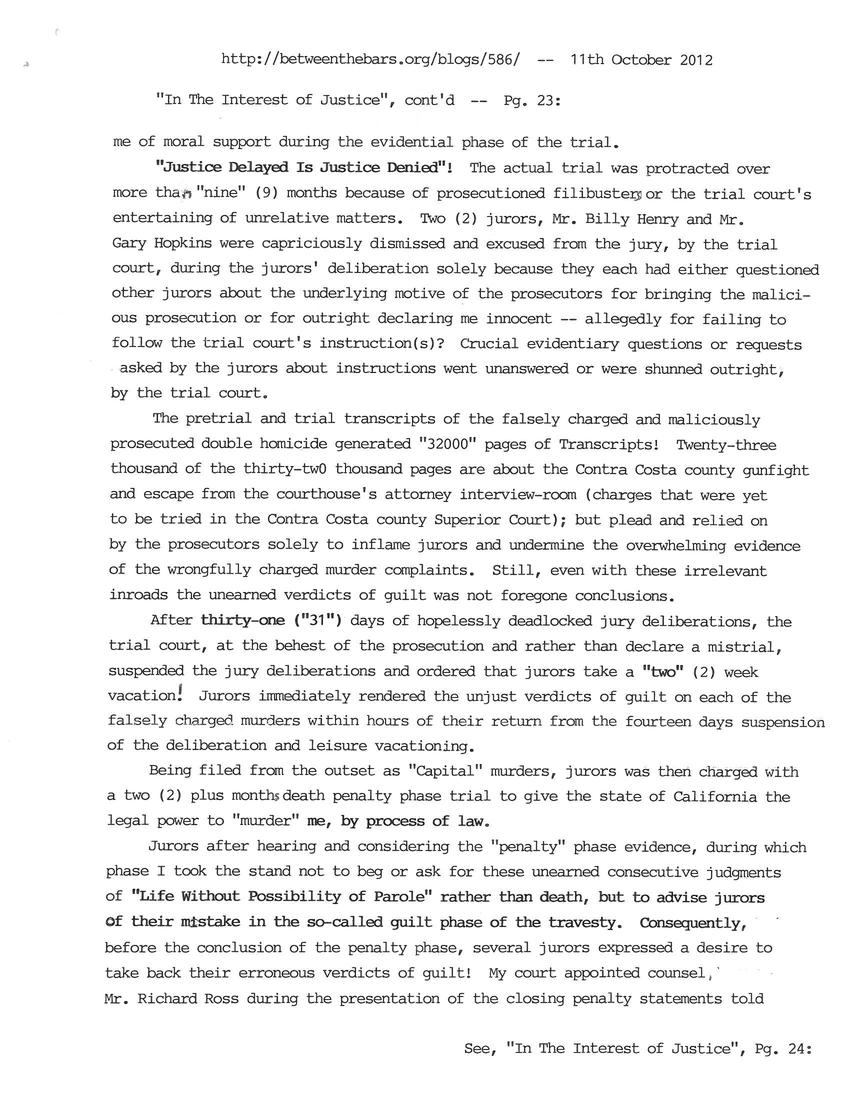 Mr Tyree Tisdale resided on Answerpt street, next door to the residence of a very important witness, Mr Silus Pullum. Mr. Pullum testified at the preliminary phase that: on the morning of the 18th June 1884, Larry Turner, with two other "unknown" men seated in a Van-vehicle, retained him and one (Mr) Wylie to move a car that was blocking the drive-way of Larry's 88th street home. That after relocating the vehicle he then "torched" the vehicle to destroy the "noticeable blood" and any traceable fingerprint evidence. Police investigators traced the torched vehicle to the ownership of murder victim, Roger (Rags) Grant.

Knowingly, he misidentified me as being one of the two men seated in the Van with Larry.

To dispel this false accusation, I subpoenaed Mr. Wylie, the owner/driver of the Tow truck vehicle who had also observed Larry Turner and the two men seated in the Van. Mr Wylie testified that he had no knowledge about any crime; that Silus Pullum asked him to move a vehicle from the drive-way of his friend's home on 88th street where he met Larry Turner who was seated in a van with two other men of who he was able to observe and identify. And, that neither of the two other men was either (me or my equally charged codefendant, Bridges) of the defendants, at the said preliminary hearing!

In spite of his preliminary hearing testimony, Mr. Pullum told several uncalled potential witnesses that L.A.P.D. detective Leroy Orozco advised him that it would help to say that "James Hawkins" was one of the men seated in the van with Larry Turner; and that the prosecutor would give him a grant of absolute immunity for his after-the-fact destruction of crime-scene evidence.

Despite the significance of each of these uncalled and available witness testimonies, neither of the prosecutors nor my court appointed lawyers issued subpoenas to either Mr. Pullum or Mr. Wylie. In the words of attorney Levin: "...either Silus or Wylie could add 'unnecessary' issues to the case...'

- the pistol had instead been taken from her home by burglars...

The prosecutorial grant of absolute immunity constituted Mr Tisdale's absolute waiver of his "Fifth" amendment constitutional privilege against being prosecuted for any overlapping uncharged crimes or relevant issues which could materialize out of the direct-and-cross examinations by counsels; and was predicated on a plea agreement to testify truthfully about the issues before the court, etc.

Notwithstanding the said agreed waivers, when questioned about the source of the $543,000.00 cash that was confiscated from his possession by the Los Angeles county sheriff deputies; and questions as to whether he had a business relationship with Silus Pullum and/or Larry turner; or had he murdered Roger Grant and Larry Turner on the morning of 18th June 1984, he refused to answer to each of the separately presented questions and "invoked" the supposedly waived privilege against self-incrimination and the trial court denied counsels request to compel Mr. Tisdale to answer the relevant specific questions; and the prosecutors didn't revoke its extraordinary plea deal-waiver of a prosecution of Mr. Tisdale for his illegal possession of a full automated submachine-gun, various other weapons, two active hand-grenades, and bulletproof vest and a bundle of cocaine, and a silencer.

The trial court reasoned that any answer from Mr. Tisdale would probably jeopardize his pending claim on a federal court forfeiture proceeding for the return of the evident ill-gotten half-million dollars. The approximate sum of cash that Larry Turner himself possessed a few days before (or on the date of his death) that had been earmarked for the purchase of several parcels of realty in Fontana, California.

As a direct consequence of the trial court sustaining of Mr. Tisale's criminality, my lawyers made a lacklustre motion requesting of the court to concomitantly STRIKE both all of Mr. Tisdale's direct and cross-examination from the record, also that Jurors be ordered to PURGE both Mr. Tisdale and his incriminating testimony from their memory (akin to concealing falsehoods with an illusion); but, then advising Jurors that they could still extrapolate from the independent testimonies of his sister, Nancy Tisdale, and that of his wife, Linda (Green) Tisdale, as evidence for the deliberation...

The trial court also bared any comment about the failure of the prosecution to call any of my family members of who had been issues subpoenaed solely to deprive me of moral support during the evidential phase of the trial.

"Justice Delayed is Justice Denied!" The actual trial was protracted over more than nine (9) months because of prosecutioned filibuster or the trial court's entertaining of unrelated matters. Two (2) jurors, Mr Billy Henry and Mr Gary Hopkins wee capriciously dismissed and excused from the jury, by the trial court, during the juror's deliberation solely because they had either questioned other jurors about the underlying motive of the prosecutors for bringing the malicious prosecution or for outright declaring me innocent - allegedly for failing to follow the trial court's instruction(s)? Crucial evidentiary questions or requests asked by the jurors about instructions went unanswered or were shunned outright by the trial court.

The pretrial and trial transcripts of the falsely charged and maliciously prosecuted double homicide generated 32000 pages of transcripts! Twenty three thousand of the thirty-two thousand pages are about the Contra Costa county gunfight and escape from the courthouse's attorney interview room (charges that were yet to be trialled in the Contra Costa county Superior Court)l but plead and relied on by the prosecutors solely to inflame jurors and undermine the overwhelming evidence of the wrongfully charged murder complaints. Still, even with these irrelevant inroads the unearned verdicts of guilt were not forgone conclusions.

After thirty-one (31) days of hopelessly deadlocked jury deliberations, the trial court, at the behest of the prosecution and rather than declare a mistrial, suspended the jury deliberations and ordered that the jurors take a two (2) week vacation! Jurors immediately rendered the unjust verdicts of guilt on each of the falsely charged murders within hours of their return from the fourteen days suspension of the deliberation and leisure vacationing.

Being filed from the outset as "Capital" murders, jurors were then charged with a two (2) plus months death penalty phase trial to give the state of California the legal power to murder me, by process of law.

Jurors after hearing and considering the penalty phase evidence, during which phase I took the stand not to bed or ask for these unearned consecutive judgements of "Life Without Possibility of Parole" rather than death, but to advise the jurors of their mistake in the so-called guilt phase of the travesty. Consequently before the conclusion of the penalty phase, several jurors expressed a desire to take back their erroneous verdicts of guilt! My court appointed counsel, Mr. Richard Ross during the presentation of the closing penalty statements told