In The Interest Of Justice,Cont'd Pg 24 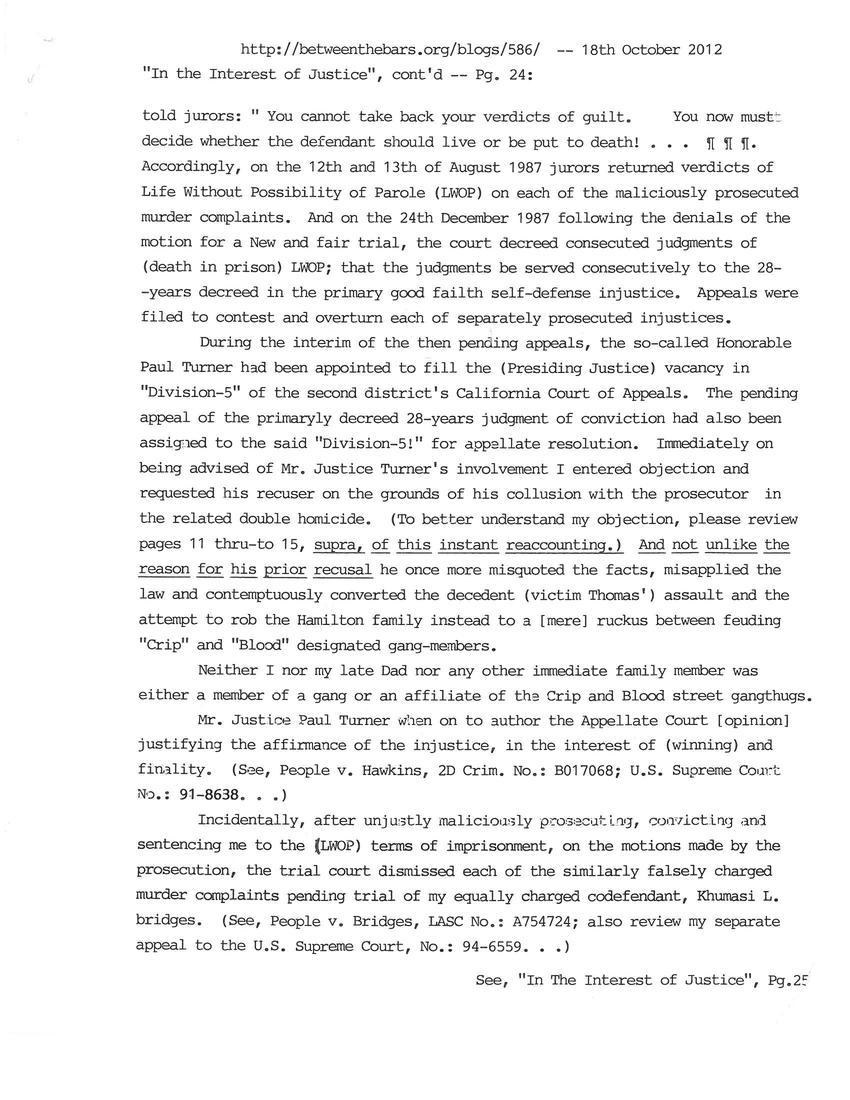 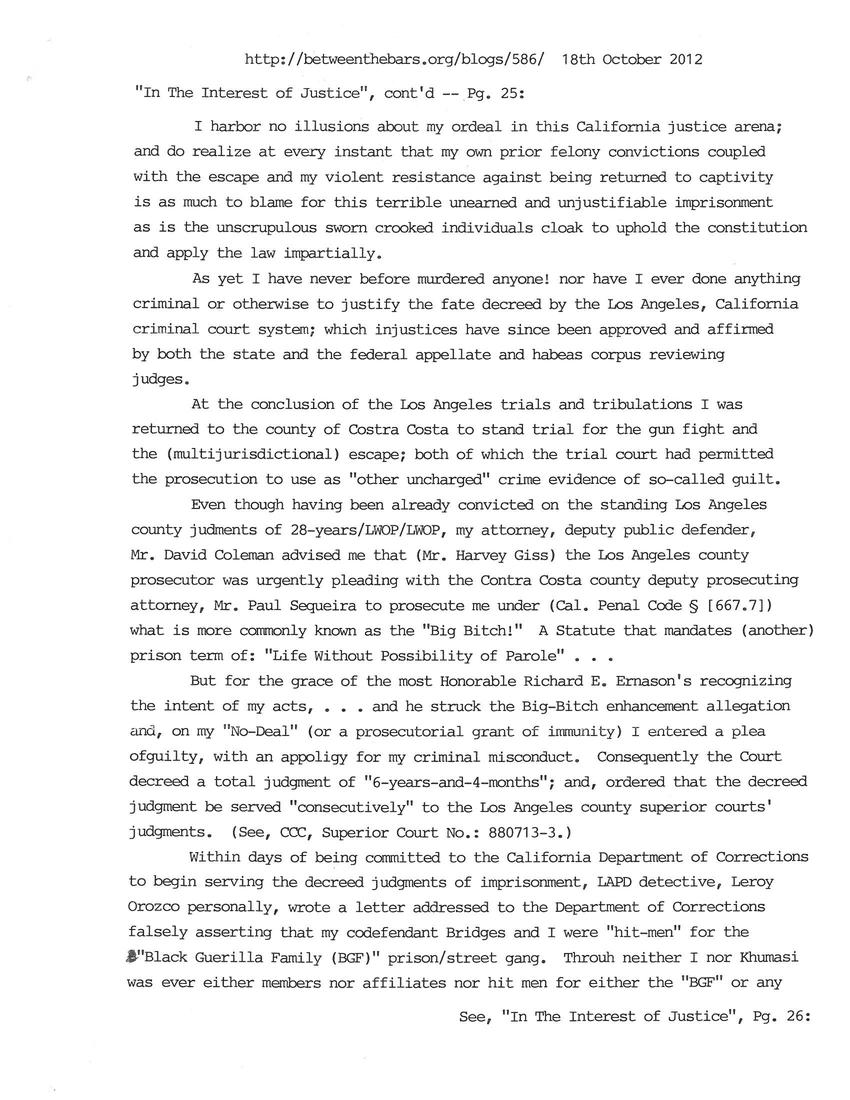 told jurors: "you cannot take back your verdicts of guilt. You now much decide whether the defendant should live or be put to death!

Accordingly, on the 12th and 13th of August 1987, jurors returned verdicts of Life Without Possibility or Parole (LWOP) on each of the maliciously prosecuted murder complaints. And on the 24th December 1987, following the denials of the motion for a new and fair trial, the court decreed consecuted judgements of (death in prison) LWOP; that the judgements be served consecutively to the 28 years decreed in the primary good-faith self-defence injustice. Appeals were filed to contest and overturn each of separately prosecuted injustices.

During the interim of the then pending appeals, the so-called Honorable Paul Turner had been appointed to fill the (Presiding Justice) vacancy in Division-5 of the second district's California Court of Appeals. The pending appeal of the primarily decreed 28 years judgement of conviction had also been assigned to the said Division 5 for appellate resolution. Immediately on being advised of Mr. Justice Turner's involvement I entered objection and requested his recuser on the grounds of his collusion with the prosecutor in the related double homicide. (To better understand my objection, please review pages 11-thru 15, supra, of this instant reaccounting.) And not unlike the reason for his prior recusal, he once more misquoted the facts, misapplied the law and contemptuously converted the decedent (victim 'Thomas') assault and the attempt to rob the Hamilton family instead to a [mere] ruckus between feuding "Crip" and "Blood" designated gang-members.

Neither I nor my late Dad nor any other immediate family member was either a member of a gang or an affiliate of the Crip and Blood street gang thugs.

Incidentally, after unjustly and maliciously prosecuting, convicting and sentencing me to the (LWOP) terms of imprisonment on the motions made by the prosecution, the trial court dismissed each of the similarly falsely charged murder complaints pending trial of my equally charged co-defendant, Khumasi L Bridges. (See, People v. Bridges, LASC No.: A754724; also review my separate appeal to the US Supreme Court, No.:94-6559...)

I harbor no illusions about my ordeal in this California justice arena; and do realize at every instant that my own prior felony convictions coupled with the escape and my violent resistance against being returned to captivity is as much to blame for this terrible unearned and unjustifiable imprisonment as is the unscrupulous sworn crooked individuals cloak to uphold the constitution and apply the law impartially.

As yet I have never before murdered anyone! Nor have I done anything criminal or otherwise to justify the fate decreed by the Los Angeles California criminal court system; which injustices have since been approved and affirmed by both the state and the federal appellate and habeas corpus reviewing judges.

At the conclusion of the Los Angeles trials and tribulations I was returned to the county of Contra Costa to stand trial for the gun fight and the (multijurisdictional) escape; both of which the trial court had permitted the prosecution to use as "other uncharged" crime evidence of so-called guilt.

Even though having been already convicted on the standing Los Angeles county judgements of 28 years/LWOP/LWOP, my attorney, deputy public defender Mr. David Coleman advised me that (Mr. Harvey Giss) the Los Angeles county prosecutor was urgently pleading with the Contra Costa county deputy prosecuting attorney, Mr Paul Sequeira to prosecute me under (Cal. Penal Code SS [667.7]) what is more commonly known as the "Big Bitch"! A statute that mandates (another) prison term of Life Without the Possibility of Parole.

But for the grace of the Most Honorable Richard E. Ernason's recognizing the intent of my acts...and he struck the Big Bitch enhancement allegation and, on my "No-Deal" (or a prosecutorial grant of immunity) I entered a plea of guilty, with an apology for my criminal misconduct. Consequently the court decreed a total judgement of "6 years and 4 months" and ordered that the decreed judgement be served "consecutively" to the Los Angeles county superior court's judgements. (See, CCC, Superior Court No.: 880713-3.)

Within days of being committed to the California Department of Corrections to begin serving the decreed judgements of imprisonment, LAPD detective Leroy Orozco personally wrote a letter addressed to the Department of Corrections falsely asserting that my co-defendant Bridges and I were "hit-men" for the "Black Guerilla Family (BGF)" prison/street gang. Though neither I nor Khumasi was ever either members nor affiliates nor hit men for either the "BGF" or any

See, In the Interests of Justice, pg 26.