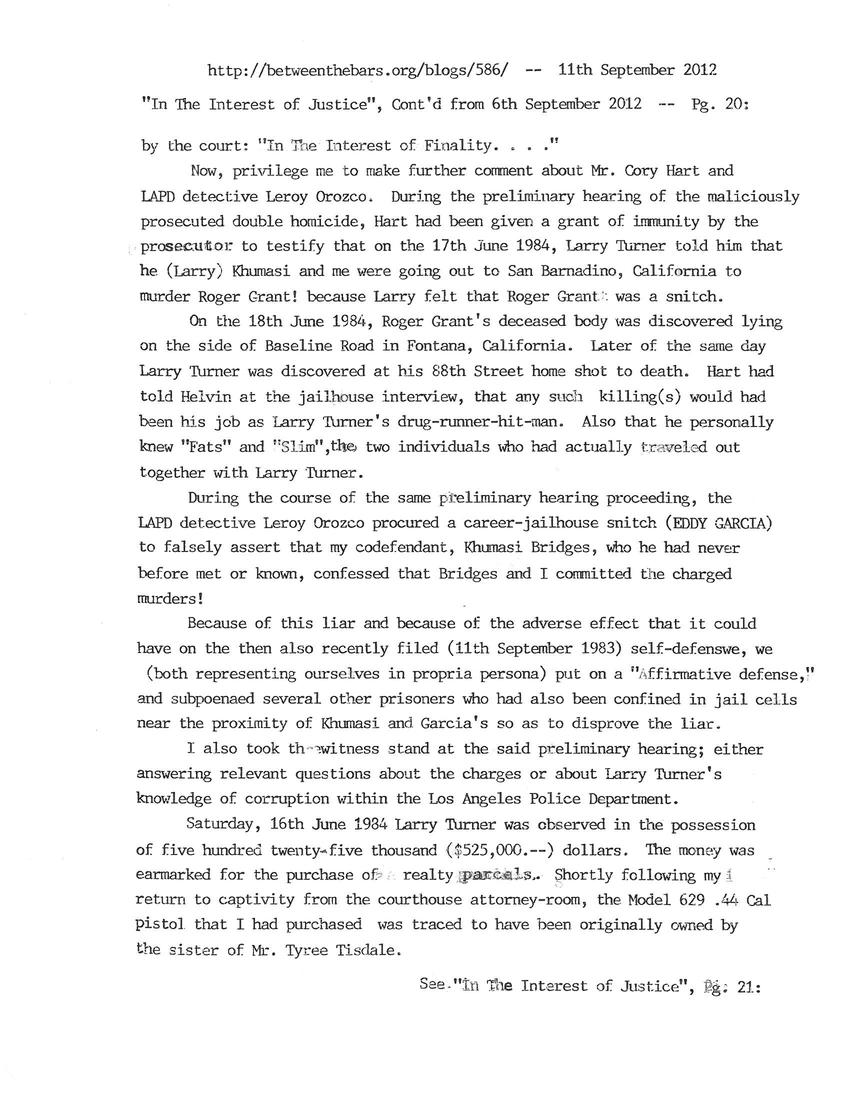 by the court: "In The Interest of Finality...."

Now, privilege me to make further comment about Mr. Cory Hart and LAPD detective Leroy Orozco. During the preliminary hearing of the maliciously prosecuted double homicide, Hart had been given a grant of immunity by the prosecutor to testify that on the 17th June 1984, Larry Turner told him that he (Larry) Khumasi and me were going out to San Bernardino, California to murder Roger Grant! Because Larry felt that Roger Grant was a snitch.

On the 18th June 1984, Roger Grant's deceased body was discovered lying on the side of Baseline Road in Fontana, California. Later of the same day Larry Turner was discovered at his 88th Street home shot to death. Hart had told Helvin at the jailhouse interview, that any such killing(s) would have been his job as Larry Turner's drug-runner-hit-man. Also that he personally knew "Fats" and "Slim", the two individuals who had actually traveled out together with Larry Turner.

During the course of the same preliminary hearing proceeding, the LAPD detective Leroy Orozco procured a career-jailhouse snitch to falsely assert that my codefendant, Khumasi Bridges, who he had never before met or known, confessed that Bridges and I committed the charged murders!

Because of this liar and because of the adverse effect that it would have on the then also recently filed (11th September 1983) self-defense, we (both representing ourselves in propria persona) put on an "Affirmative defense", and subpoenaed several other prisoners who had also been confined in jail cells near the proximity of Khumasi and Garcia's so as to disprove the liar.

I also took the witness stand at the said preliminary hearing; either answering relevant questions about the charges or about Larry Turner's knowledge of corruption within the Los Angeles Police Department.

Saturday, 16th June 1984 Larry Turner was observed in the possession of five hundred twenty-five thousand ($525,000.--) dollars. The money was earmarked for the purchase of realty parcels. Shortly following my return to captivity from the courthouse attorney-room, the Model 629 .44 Cal pistol that I had purchased was traced to have been originally owned by the sister of Mr. Tyree Tisdale.