Crime and Punishment in American History 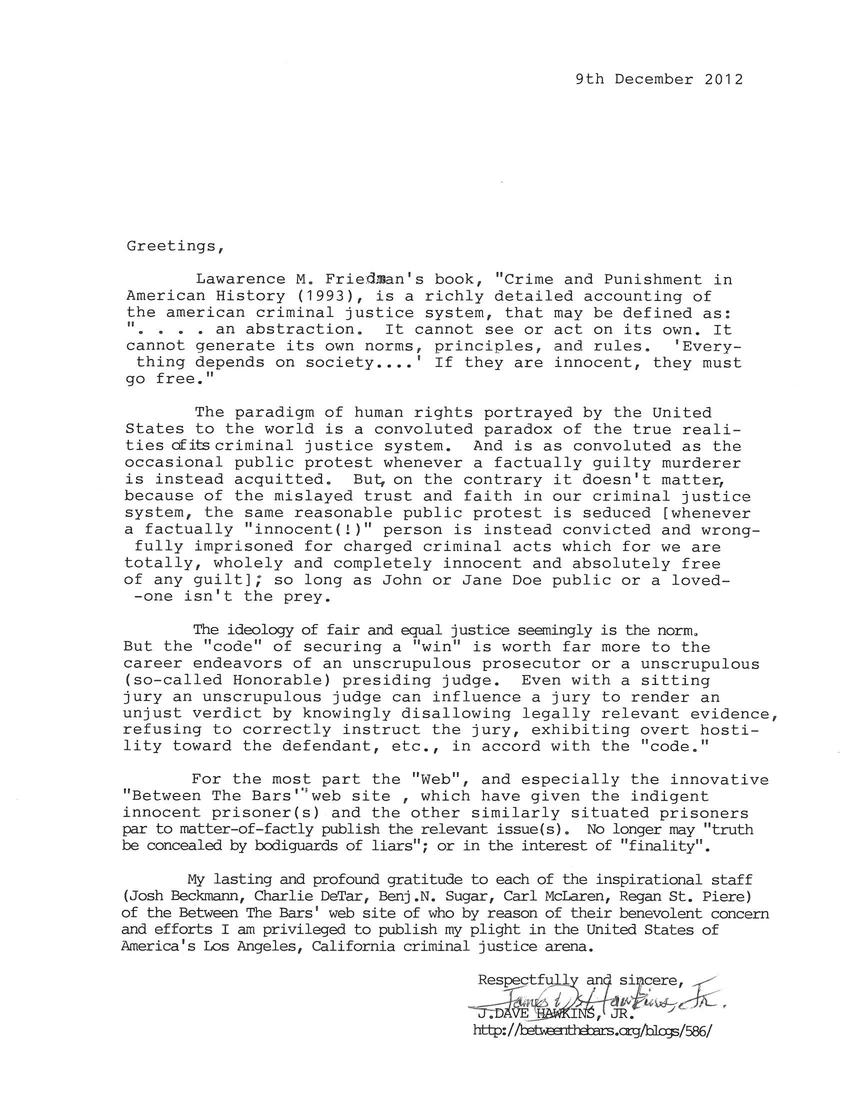 Lawrence M. Friedman's book, "Crime and Punishment in American History" (1993), is a richly detailed accounting of the American criminal justice system, that may be defined as: "....an abstraction. It cannot see or act on its own. It cannot generation its own norms, principles, and rules. 'Everything depends on society....' If they are innocent, they must go free".

The paradigm of human rights portrayed by the United States to the world is a convoluted paradox of the true realities of its criminal justice system. And is as convoluted as the occasional public protest whenever a factually guilty murderer is instead acquitted. But, on the contrary it doesn't matter, because of the mislayed trust and faith in our criminal justice system, the same reasonable public protest is seduced [whenever a factually "innocent(!)" person is instead convicted and wrongfully imprisoned for charged criminal acts which for we are totally, wholly and completely innocent and absolutely free of any guilt]; so long as John or Jane Doe public or a loved one isn't the prey.

The ideology of fair and equal justice seemingly is the norm. But the "code" of securing a "win" is worth far more to the career endeavors of an unscrupulous prosecutor or an unscrupulous (so-called Honorable) presiding judge. Even with a sitting jury an unscrupulous judge can influence a jury to render an unjust verdict by knowingly disallowing legally relevant evidence, refusing to correctly instruct the jury, exhibiting overt hostility toward the defendant, etc., in accord with the "code".

For the most part the "Web", and especially the innovative "Between The Bars" web site, which have given the indigent innocent prisoner(s) and the other similarly situated prisoners par to matter-of-factly publish the relevant issue(s). No longer may "truth be concealed by bodyguards of liars"; or in the interest of "finality".

My lasting and profound gratitude to each of the inspirational staff (Josh Beckmann, Charlie DeTar, Benj. N. Sugar, Carl McLaren, Regan St. Piere) of the Between The Bars web site of who by reason of their benevolent concern and efforts I am privileged to publish my plight in the United States of America's Los Angeles, California criminal justice arena.