In the Interest of Justice - Continued 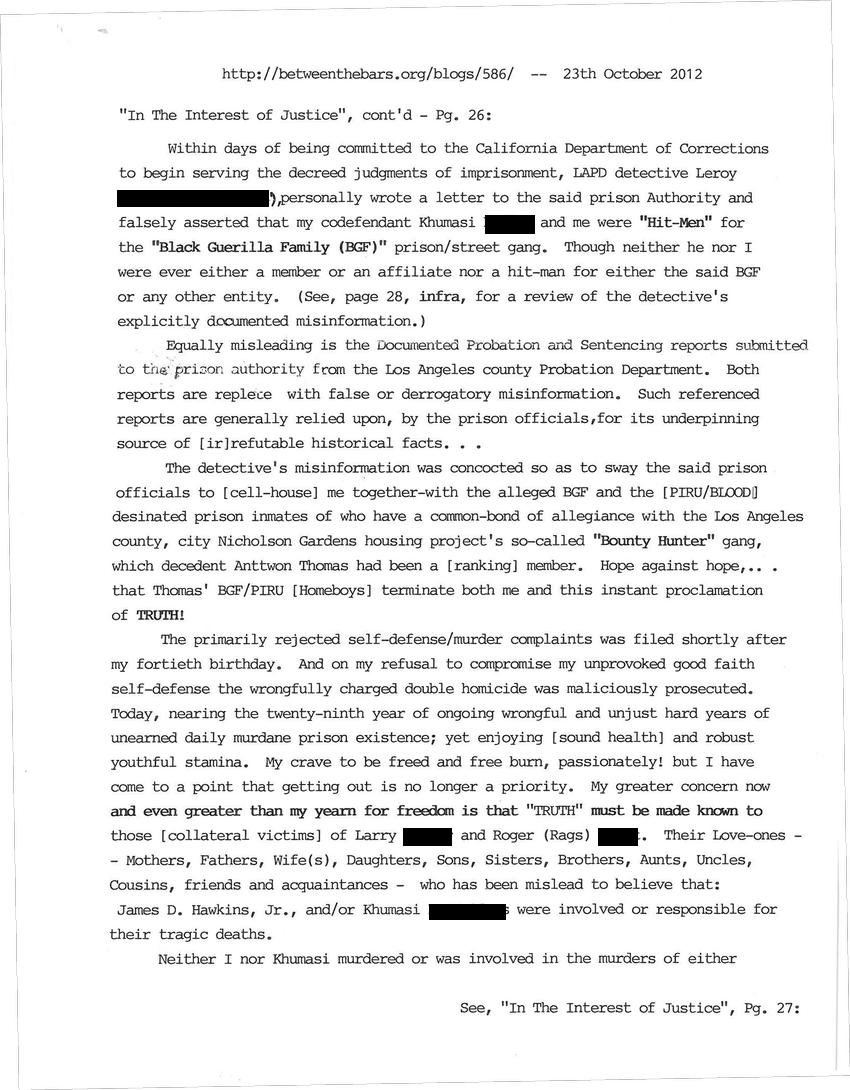 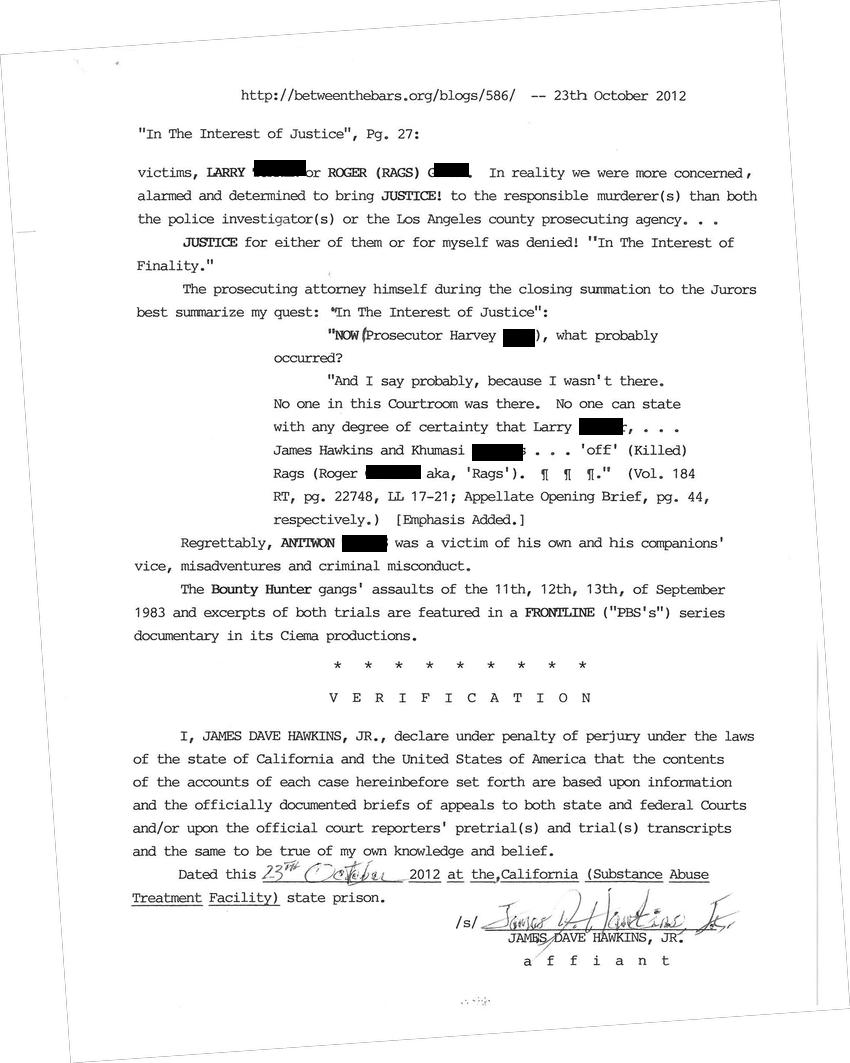 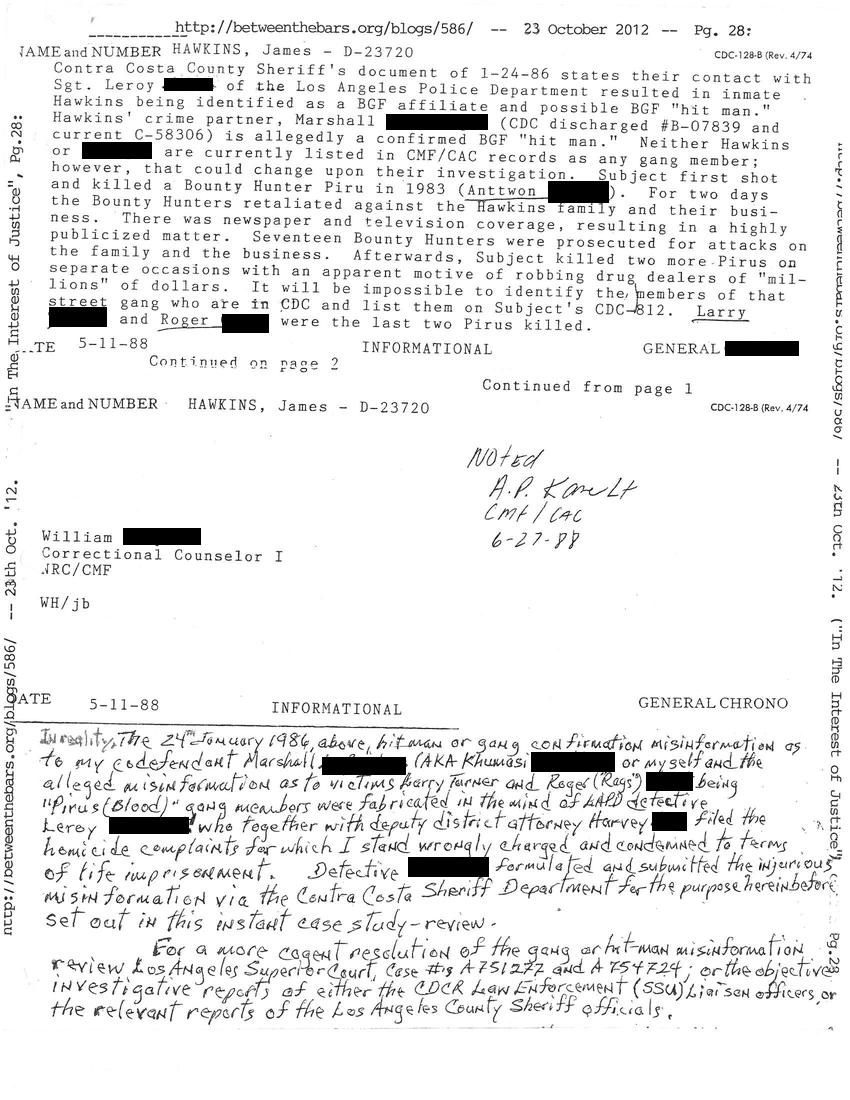 Within days of being committed to the California Department of Corrections to begin serving the decreed judgements of imprisonment, LAPD detective Leroy [REDACTED] personally wrote a letter to the said prison Authority and falsely asserted that my co-defendant Khumasi [REDACTED] and me were "hit-men" for the Black Guerilla Family (BGF) prison/street gang. Though neither he nor I were ever either a member or an affiliate not a hit-man for either the said BGF or any other entity. (See page 28, infra, for a review of the detective's explicitly documented misinformation.)

Equally misleading is the Documented Probation and Sentencing reports submitted to the prison authority from the Los Angeles county Probation Department. Both reports are replete with false or derogatory misinformation. Such referenced reports are generally relied upon by the prison officials for their underpinning source of irrefutable historical facts...

The detective's misinformation was concocted so as to sway the said prison officials to cell-house me together with the alleged BGF and the PIRU/BLOOD designated prison inmates who have a common bond of allegiance with the Los Angeles County city Nicholson Gardens Housing Project's so called "Bounty Hunter" gang, which decedent Anttwon Thomas had been a ranking member. Hope against hope...that Thomas' BGF/PIRU homeboys terminate both me and this instant proclamation of TRUTH!

The primarily rejected self-defense/murder complaints were filed shortly after my fortieth birthday. And my refusal to compromise my unprovoked good faith self-defense the wrongfully charged double homicide was maliciously prosecuted. Today, nearing the twenty-ninth year of ongoing wrongful and unjust hard years of unearned daily mundane prison existence; yet enjoying sound health and robust youthful stamina. My crave to be freed and free burn, passionately! But I have come to a point that getting out is no longer a priority. My greater concern now and even greater than my yearning for freedom is that TRUTH must be made known to those collateral victims of Larry [REDACTED] and Roger (Rags) [REDACTED]. Their loved ones - mothers, fathers wives, daughters, sons, sisters, brothers, aunts, uncles, cousins, friends and acquaintances - who have been mislead to believe that James D. Hawkins Jr and/or Khumasi [REDACTED] were involved or responsible for their tragic deaths.

Neither I nor Khumasi murdered or was involved in the murders of either victims Larry [REDACTED] or Roger (Rags) [REDACTED]. In reality we were more concerned, alarmed and determined to bring JUSTICE! to the responsible murderer(s) than both the police investigators or the Los Angeles County prosecuting agency...

JUSTICE for either of them or for myself was denied! In the Interest of Finality.

The prosecuting attorney himself during the closing summation to the jurors best summarized my quest: In the Interest of Justice.

"Now (Prosecutor Harvey [REDACTED]), what probably occurred? And I say probably, because I wasn't there. No one in this courtroom was there. No one can state with any degree of certainty that Larry [REDACTED]...James Hawkins and Khumasi [REDACTED]...'off' (killed) Rags (Roger [REDACTED] aka 'Rags')". (Vol 184 RT, pg 22748, LL 17-21; Appellate Opening Brief pg. 44, respectively.) [Emphasis added].

Regrettably Antwon [REDACTED] was a victim of his own and his companions' vice, misadventures and criminal misconduct.

The Bounty Hunter gangs' assaults of the 11th, 12th, 13th of September 1983 and excepts of both trials are featured in a FRONTLINE (PBS) series documentary in its Ciema productions.

I, James Dave Hawkins Jr, declare under penalty of perjury under the laws of the State of California and the United States of America that the contents of the accounts of each case herinbefore set forth are based upon information and the officially documented briefs of appeals to both state and federal courts and/or upon the official court reporters' pretrial(s) and trials(s) transcripts and the same to be true of my own knowledge and belief.