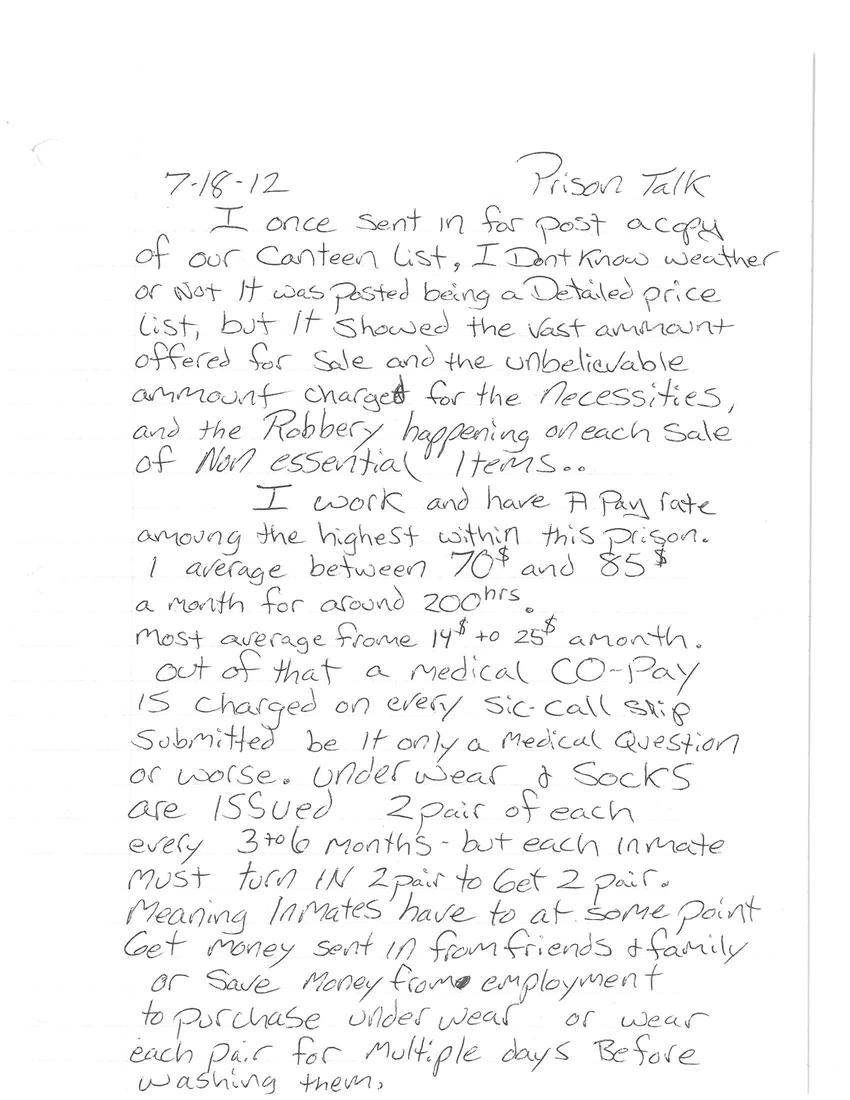 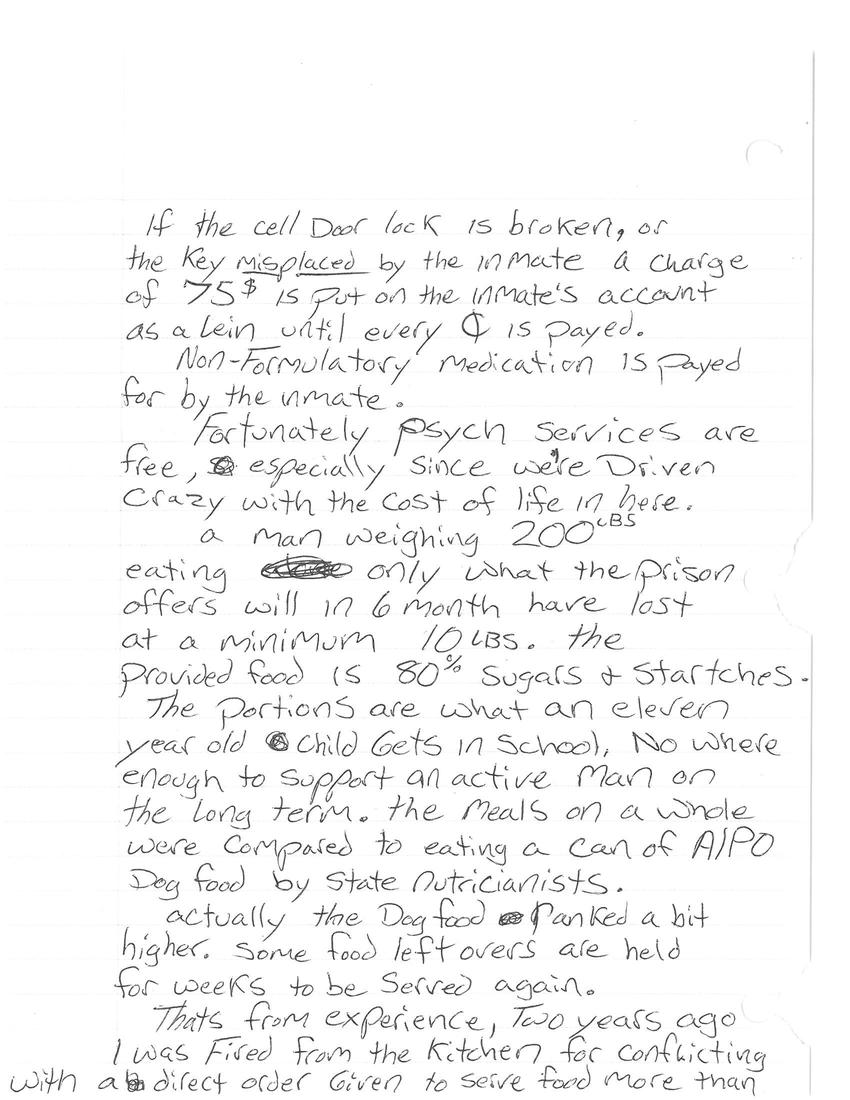 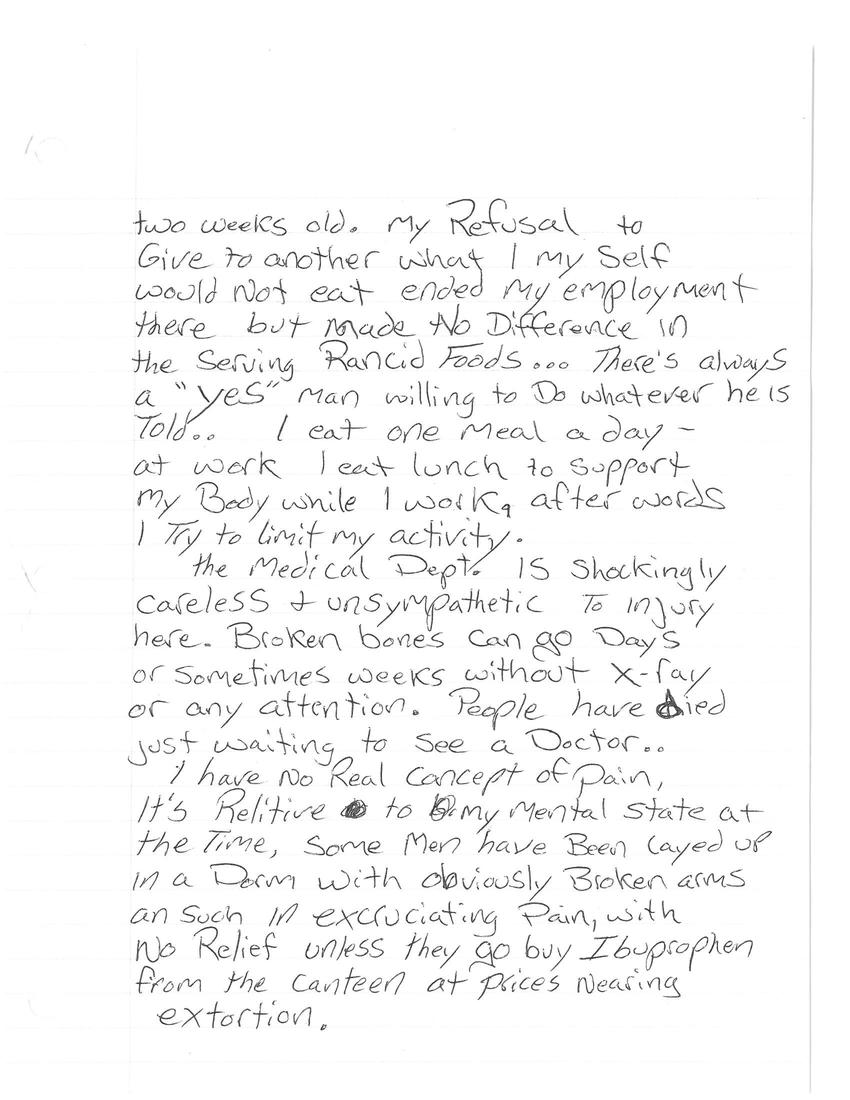 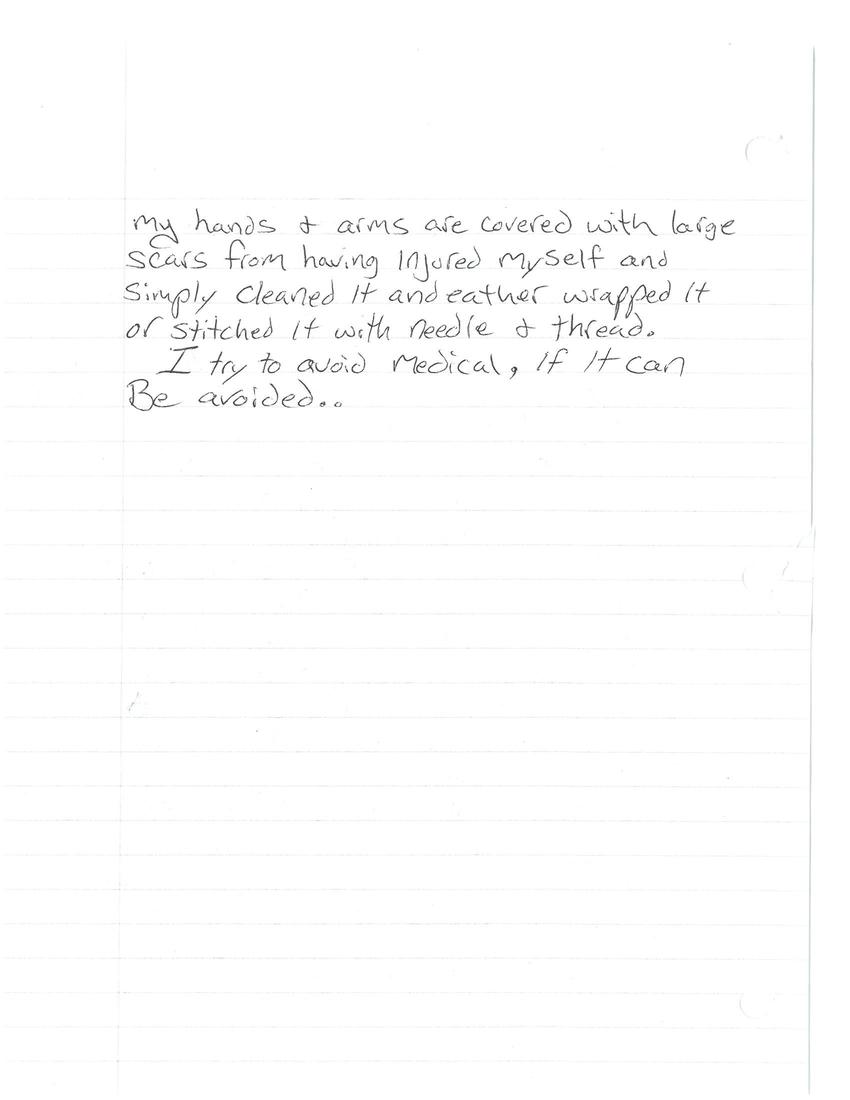 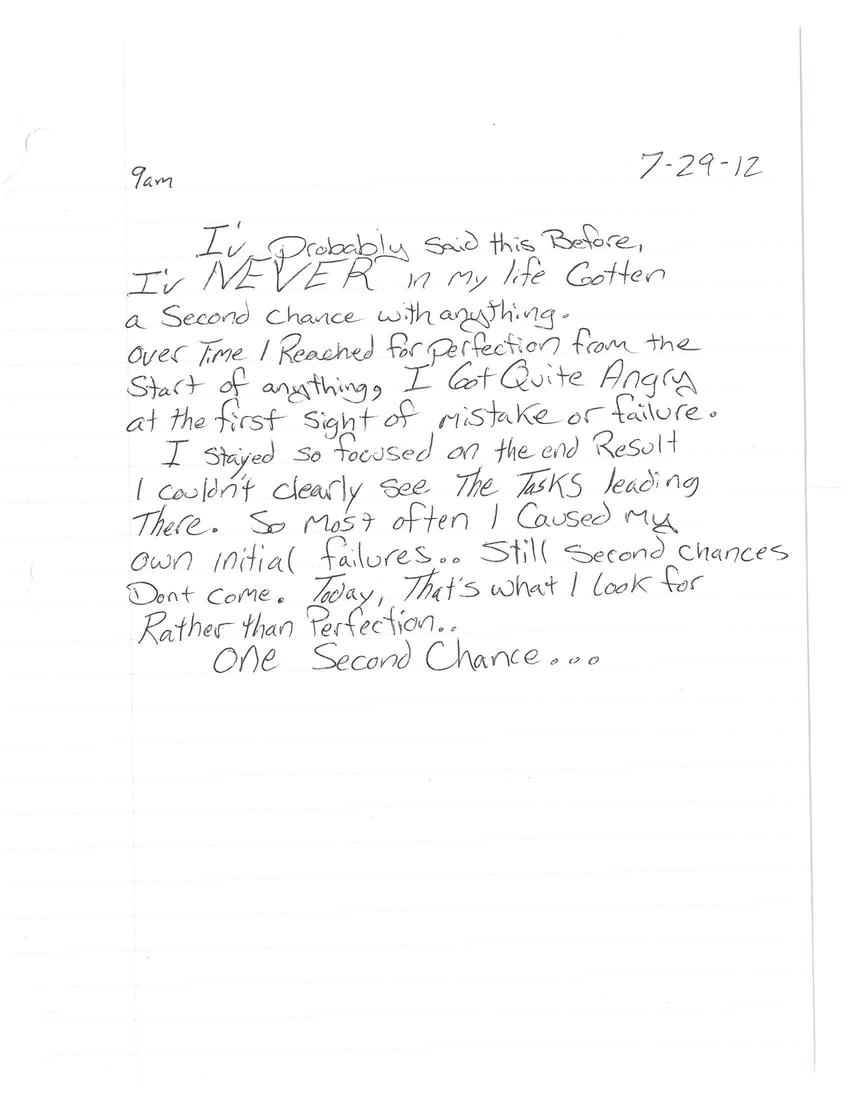 I once sent in for post a copy of our canteen list. I don't know whether or not it was posted being a detailed price list, but it showed the vast amount offered for sale and the unbelievable amount charged for the necessities, and the robbery happening on each sale or non essential items...

I work and have a pay rate among the highest within this prison. I average between 70$ and 85$ amonth for around 200 hrs. Most average frm 14$ to 25$ a month. Out of that a medical CO-PAY IS cahrged on every sic-call slip submitted be it onl a medical question orworse. Underwear and socks are issued 2 pair of each every 3 to 6 months - but each inmate must turn in 2 pair to get 2 pair. Meaning inmates have to at some point get money sent in from friends and family or save money from employment to purchase underwear or wear each pair for multiple days before washing them.

If the cell door lock is broken, or the key misplaced by the inmate a charge of 75$ is put on the inmate's account as a loan until every cent is paid.

Fortunately Psyc services are free, especially since we're driven crazy with the cos to life in here.

A man wrighing 200 pounds eating only what the prison offers will in 6 mont havelostat a minimum 101bs. The provided food is 80% sugars and starches. The portions are what a eleven year old child gets in school, nowhere enough to support an active man on the long term. The meals on a whole were compared to eating a can of ALPO Dog Food b state nutricianists.

Actually the dog food ranked a bit higher. Some food left overs are held for weeks to be served again.

Thats from experience, two years ago I was fired from the kitchen for conflicting with a direct order given to serve food more than two weeks old. My refusal to give to another what I myself would not eat ended my employnment there but made no difference in the serving rancid foods...There's alwaysa "yes" man willing todo whatever he is told.. I eat one meal a day - at work I eat lunch to support my body while I work, afterwads I try to limit my activity.

The Medical Dept is shockingly careless and unsympathetic to injury here. Broken bones can go days or sometimes weeks withot X-ray or any attention. People have died just waiting to see a Doctor..

I have no real concept of pain, it's relative to my mental state at the time, some me have been laid up in a dorm with obviously broken arms and such in excrutiating pain, with no relief unless they go buy Ibuprophen from the canteen at prices nearing extortion my hands and arms are covered with large scars from having injured myself and simply cleaned it and either wrapped it or stitched it with needle and thread.

I try to avoid medical, if it can be avoided..

I've probably said this before, I've NEVER in m life gotten a sencnd chance with anything. Over time I reached for perfection from the start of anything, I get quite angry at the first sight of mistake or failure.

I stayed so focused on the end result I couldn't clearly see the tasks leading there. So most often I caused my own initial failures.. Still second chances don't come. Today, that's what I look for rather than perfection..
One second chance...

Thanks for writing! I finished the transcription for your post.
It doesnt surprise me that there are broken bones especially, mainly because so many who are kept inside for so long get brittle bone density due to lack of vitamin D / vitamin D 3. I totally understand your point of view regarding medical and avoiding it and also about the outrageous pricing, especially for those who may not receive any help financially from the outside and have quite a lot of years to spend in there. Wishing you the best and hope that things are looking up in your life now! was happy to see replies from your friend, Im sure you were too! -CC