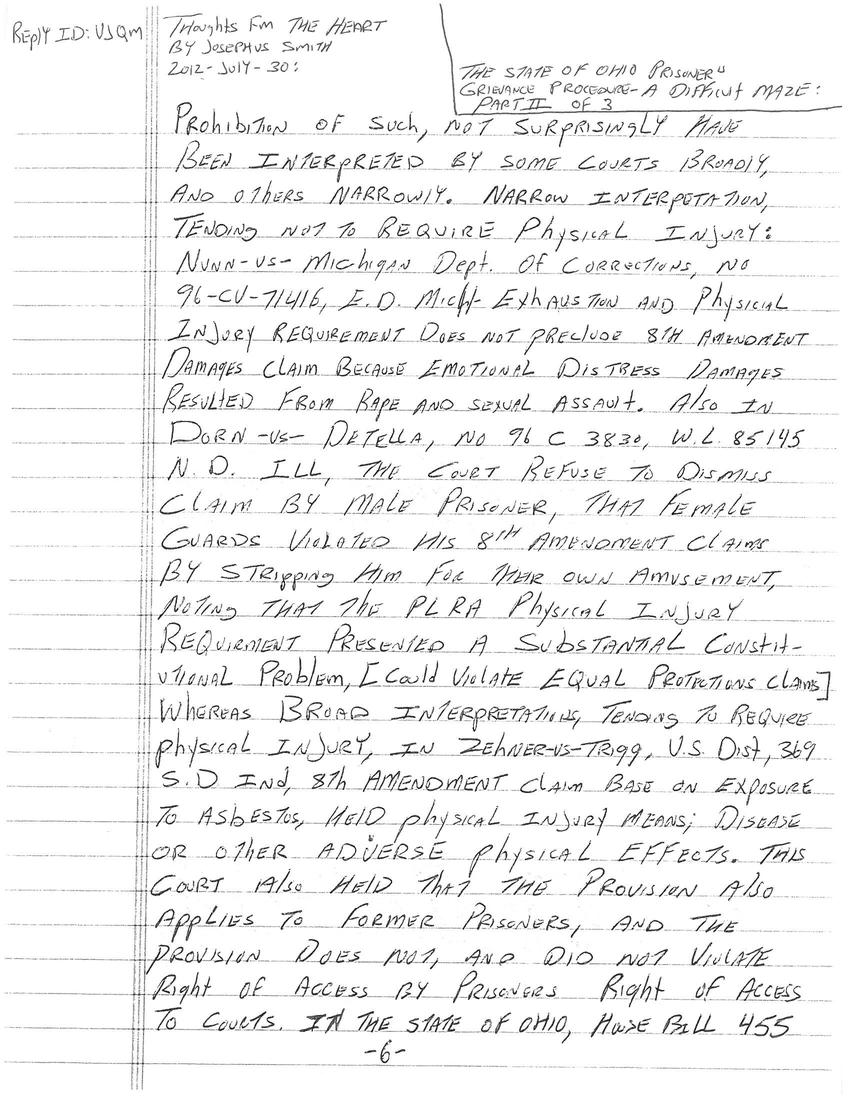 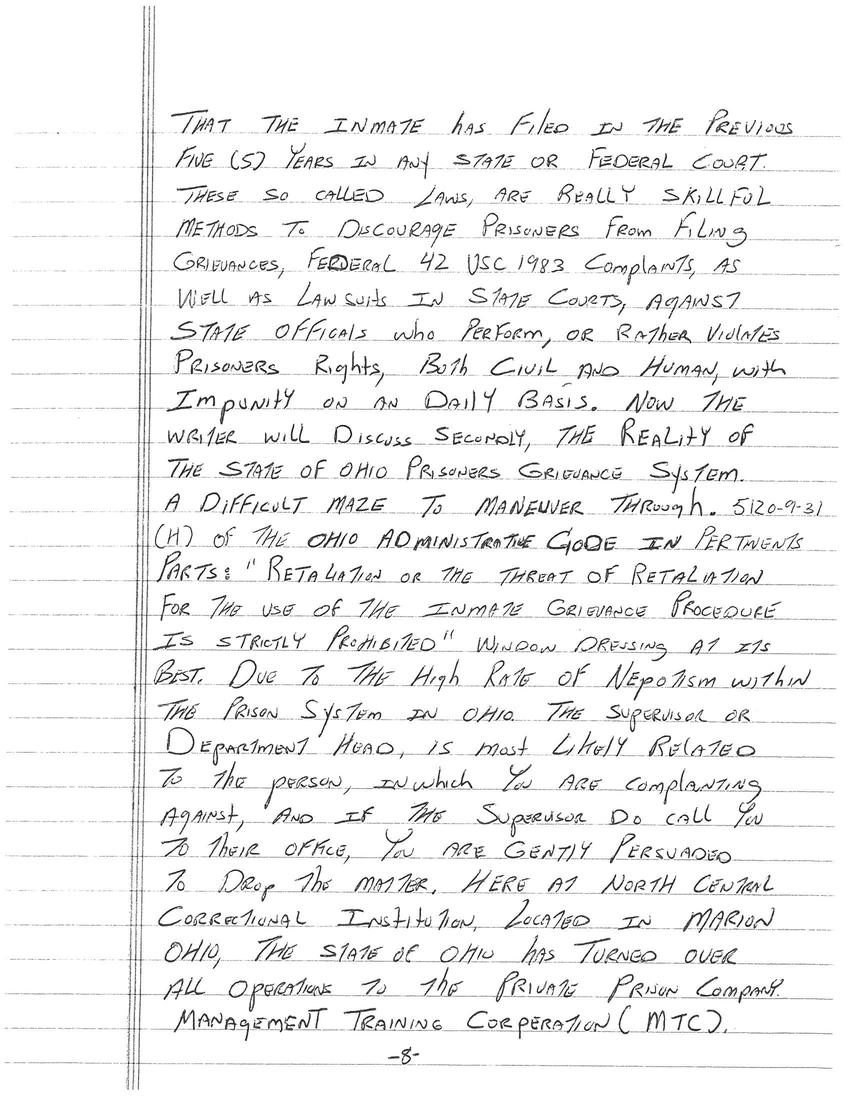 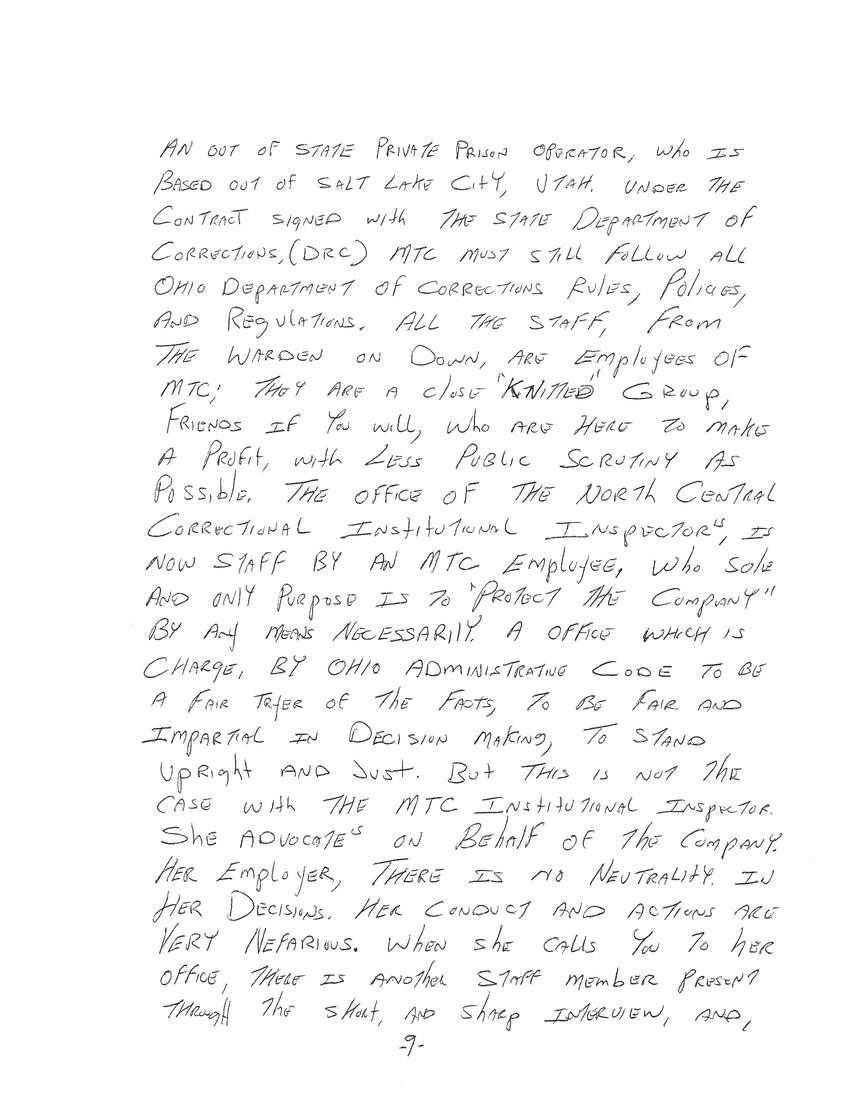 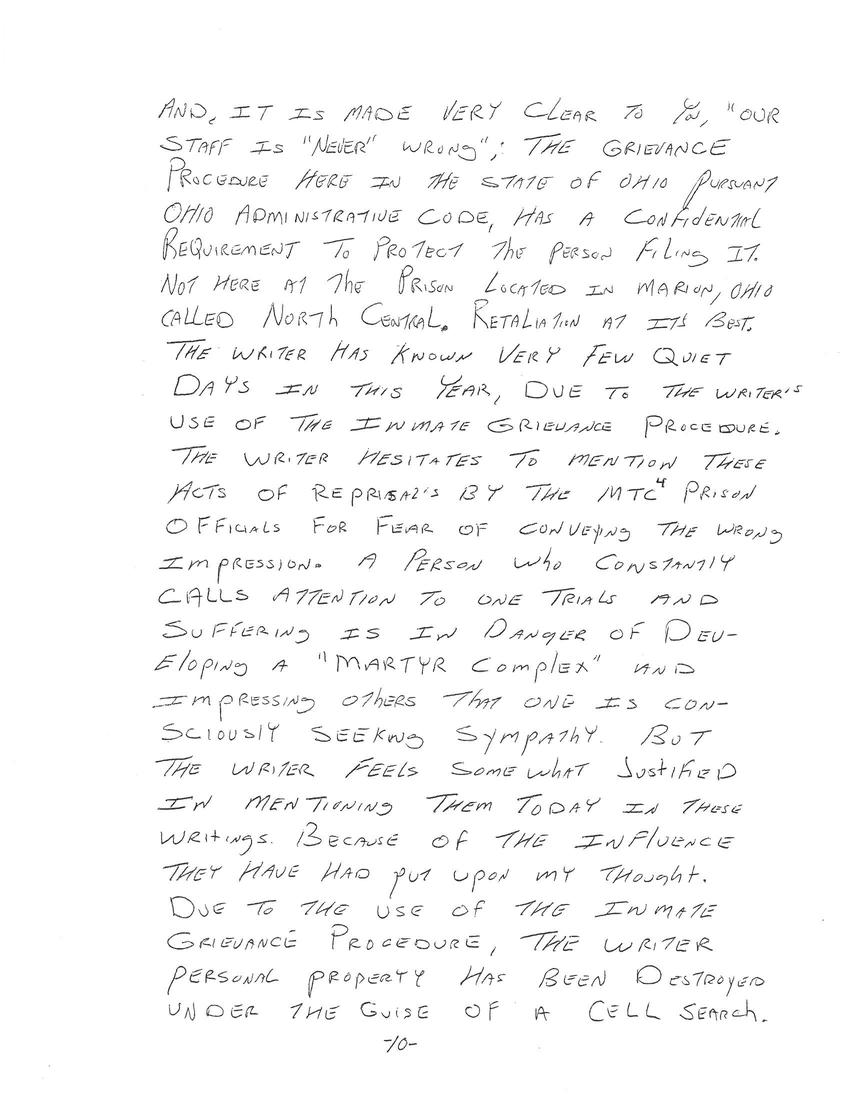 Thoughts From The Heart
By Josephus Smith
2012-July-30

THE STATE OF OHIO PRISONER GRIEVANCE PROCEDURE - A DIFFICULT MAZE:
Part II of 3

Prohibition of such, not surprisingly have been interpreted by some courts broadly, and others narrowly. Narrow interpretation tending not to require physical injury: Nunn vs Michigan Dept of Corrections, no 96-CU-71486, E D. Mich. Exhaustion and physical injury requirement does not preclude 8th Amendment damages claim because emotional distress damages resulted from rape and sexual assault. Also in Dorn vs Detella, no 96 C 3830, w L 85145 N D. Ill, the court refuse to dismiss claim by male prisoner, that female guards violated his 8th Amendment claims by stripping him for their own amusement noting that the PLRA Physical Injury requirement presented a substantial constitutional problem, I could violate Equal Protections Claims) whereas broad interpreting, tending to require Physical Injury, in Zehner vs Trigg, U S Dist, 369 S D Ind, 8th Amendment claim base on exposure to asbestos held physical injury means; disease or other adverse physical effects. This court also held that the provision also applies to former prisoners, and the provision does not, and did not violate right of access by prisoners right of access to courts. In the state of Ohio, House Bill 455 which became effective on October 17, 1996, imposed similar burdens on inmate litigants in Ohio courts. Its provisions apply to inmates who file civil actions against the state, a political subdivision, or an employee of the state. An inmate who flies a case covered by House Bill 455 must also file two documents to show that he or she has used the grievance system to resolve the problem before filing the lawsuit.

1 An affidavit stating that a grievance was filed and the date on which a decision was received.

2 a copy of any written decision regarding the grievance, and must exhaust all appeals available in the grievance system). The state of Ohio Dept of Corrections, under House Bill 455, has adopted rules to punish inmates who file a case of appeal that is dismissed as frivolous pursuant O R C 2969.24 or 28 USC 1915 D, thus inmates who, federal or state claims are dismissed as frivolous will be subjected to the following Dept of Corrections sanctions: 1 extra work duty without compensation,loss of commissary privileges, loss of television and radio privileges and recreational activity. It should also be noted that any inmate in the great (sc) state of Ohio, who file a civil case against the state must file an affidavit that contains a description of each civil action or appeal of an civil action that the inmate has filed in the previous five (5) years in nay state or federal court. These so called laws, are really skillful methods to discourage prisoners from filing grievances, federal 42 USC 1983 complaints, as well as law suits in state courts against state officials who perform, or rather violates prisoners' rights, both civil and human, with impunity on an daily basis. Now the writer will discuss secondly, the reality of the state of Ohio prisoners grievance system. A difficult maze to maneuver through. 5120-9-31 (H) of the Ohio administrative code in pertinent parts: "Retaliation or the threat of retaliation for the use of the inmate grievance procedure is strictly prohibited", window dressing at its best. Due to the high rate of nepotism within the prison system in Ohio, the supervisor or department head, is most likely related to the person, in which you are complaining against, and if the supervisor do call you to their office, you are gently persuaded to drop the matter. Here at North Central Correctional Institution, located in Marion, Ohio, the state of Ohio has turned over all operations to the private prison company Management Training Corporation (MTC), an out of state private prison operator, who is based out of Salt Lake City, Utah. Under the contract signed with the State Department of Corrections (DRC), MTC must still follow all Ohio Department of Corrections rules, policies, and regulations. All the staff, from the warden on down, are employees of MTC; they are a close "knitted" group, friends if you will, who are here to make a profit, with less public scrutiny as possible. The office of the North Central Correctional Institutional Inspectors, is now staff by an MTC employee, who sole and only purpose is to "protect the company" by any means necessarily. An office which is charge, by Ohio Administrative Code to be a fair trier of the facts, to be fair and impartial in decision making, to stand upright and just. But this is not the case with the MTC institutional inspector. She advocates on behalf of the company, her employer, there is no neutrality in her decisions. Her conduct and actions are very nefarious. When she calls you to her office, there is another staff member present through the short and sharp interview, and, and, it is made very clear to you, "Our staff is NEVER wrong"; the grievance procedure here in the state of Ohio pursuant Ohio Administrative Code,has a confidential requirement to protect the person filing it. Not here at the prison located in Marion, Ohio called North Central. Retaliation at its best. The writer has known very few quiet days in this year, due to the writer's use of the inmate grievance procedure. The writer hesitates to mention these acts of reprisals by the MTC prison officials for fear of conveying the wrong impression. A person who constantly calls attention to one trials and suffering is in danger of developing a "martyr complex" and impressing others that one is consciously seeking sympathy. But the writer feels somewhat justified in mentioning them today in these writings. Because of the influence they have had put upon my thought. Due to the use of the inmate grievance procedure, the writer personal property has been destroyed under the guise of a cell search.