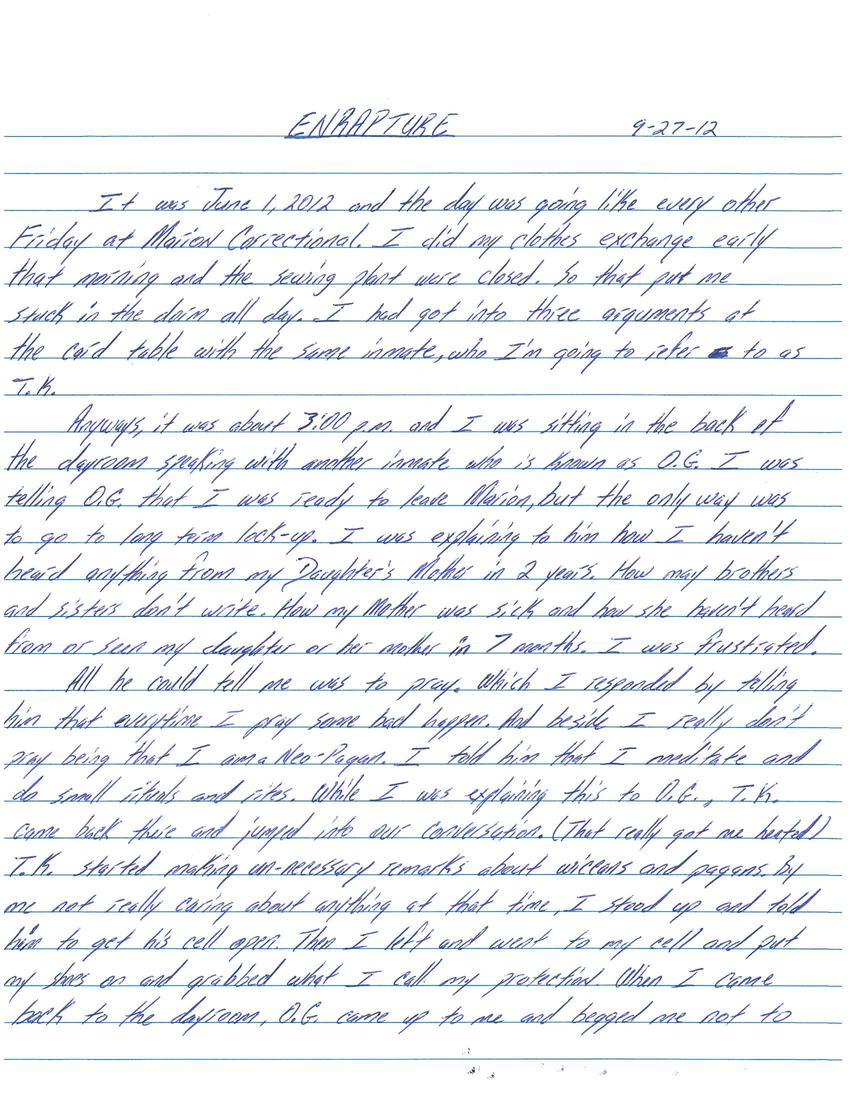 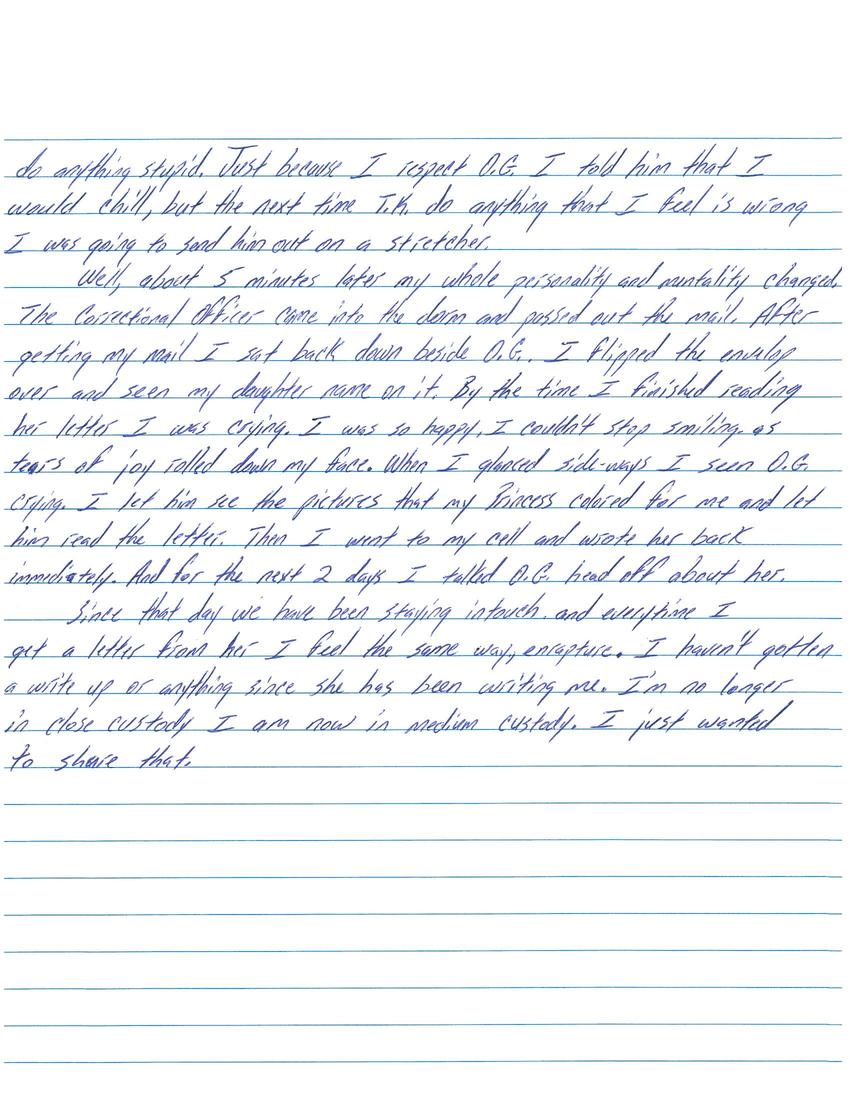 It was June 1, 2012 and the day was going like every other Friday at Marion Correctional. I did my clothes exchange early that morning and the sewing plant were closed. So that put me stuck in the dorm all day. I had got into these arguments at the card table with the inmate, who i'm going to refer to as T K.

Anyways, it was about 3:00pm and I was sitting in the back ofthe dayroom speaking with another inmate who is known as O G. I was telling O G that I was ready toi leave Marion, but the only way was to go to long term lock-up. I was explaining to him how I haven't heard anything from my daughters mother in 2 years. How may brothers and sisters don't write. How my Mother was sick and how she hasen't heard from or seenmy daughter or her Mother in 7 months. I was frustrated.

all hecould tell me wasto pray. Which I responded by telling him that everythingi pray some bad happen. and beside I really don't pray being that I am a Neo-Pagan. I told him that I meditate and do small rituals and rites. While i was explaining this to O G, T K cmae back there and jumped into our conversation. (That really got me heated). T K started making unnecessary remarks about wiccans and pagans. By me not really caring about anything at that time, I stood up and told him to get his cell open. Then I left and went to my cell and put my shoes on and grabbed what i call my protection. When I came back to the dayroom, O G came up top me and begged me not to do anything stupid. Just because I respect O G I told him that I would chill, but the next time T K do anything that I feel is wrong I was going to send him out on a stretcher.

Well, about 5 minutes later my wholed personality and mentality changed. The Correctional Officer came ito the dorm and passed out the mail. After getting my mail I sat back down beside O G. I flipped the envelop over and seen my daughter name on it. By the time I finished reading her letter I was crying. I was so happy. I couldn't stop smiling as tears of joy rolled down myface. When I glanced side-ways I seen O G crying. I let him see the pictures that my Princess colored for me and let him read theletter. Then I went to my cell and wrote her back immediately. And for the next 2 days I talked O Ghead off about her.

Since that day we have been staying in touch and every time I get a letter from her I feel the same way, enrapture. I haven't gotten a write up or anything since she has been writing me. I just wanted to share that.

What a pleasure it was to read your blog. Thank you so much for sharing!

I write to a friend in prison and this was a beautiful reminder for just how important staying in touch regularly can be. Your blog also serves as a beautiful example of how love can conquer over negativity. I'm so glad you're in contact with your daughter again - Keep that love in your heart!

Thank you again & take care,
Nicki
Thanks for writing! I finished the transcription for your post.
(scanned reply – view as blog post)
uploaded Dec. 2, 2012.  Original (PDF) 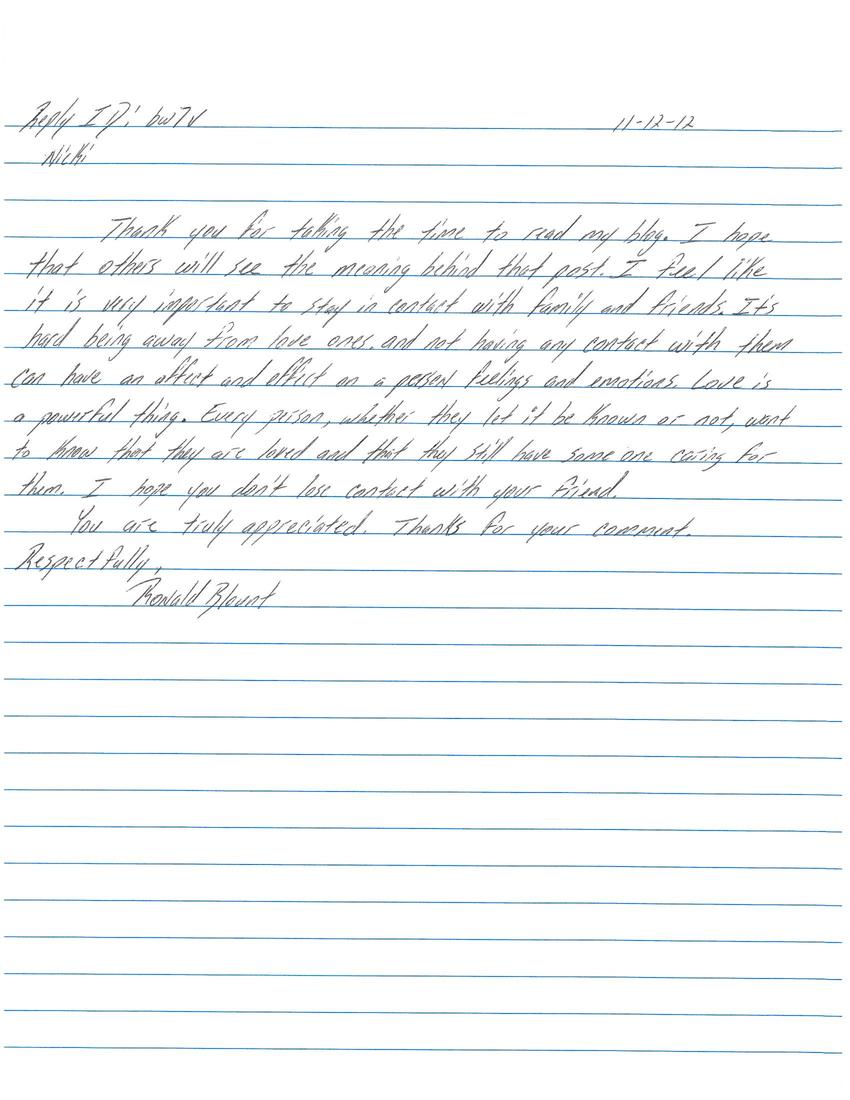 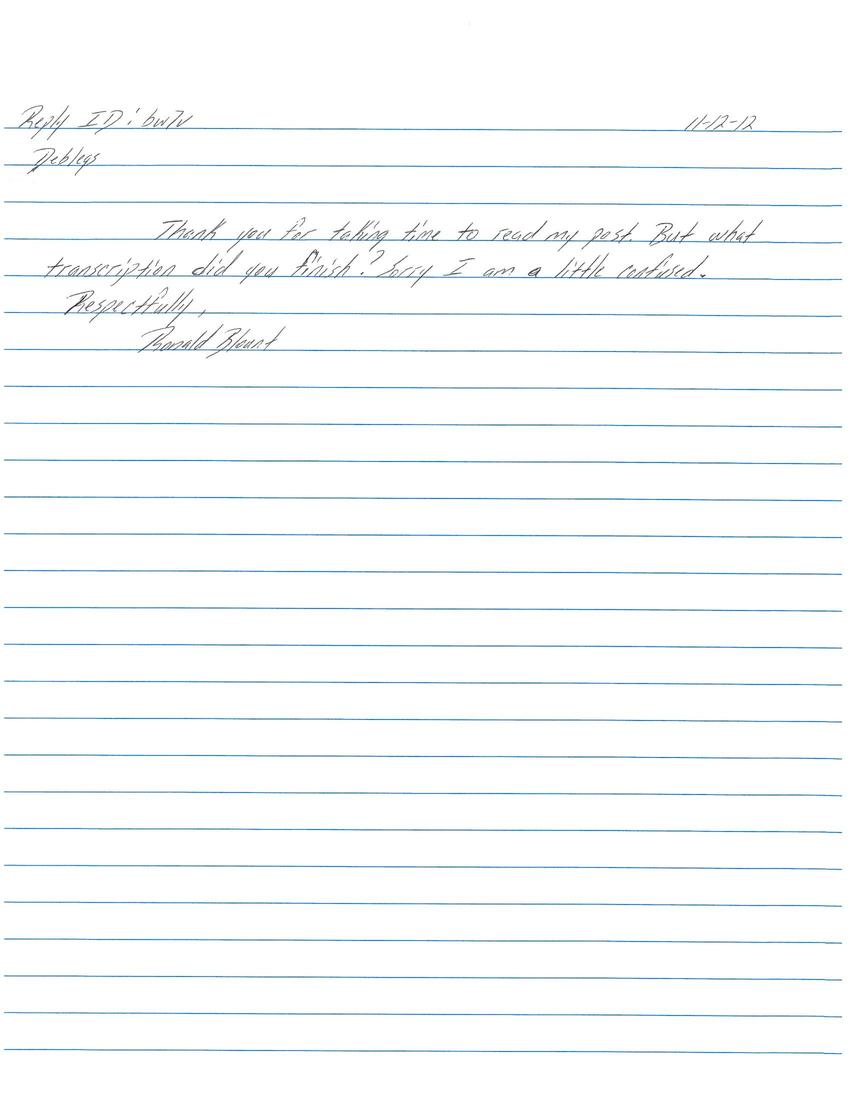 I'll reply to this one while I'm here as Debleg transcribes many posts here on btb.

What it means is that she has transcribed your words into typed text. Transcriptions make your blogs more accessible to search engines, translators and visitors to the site, so it is possible more people will now read your words.

I hope you're feeling the love :)