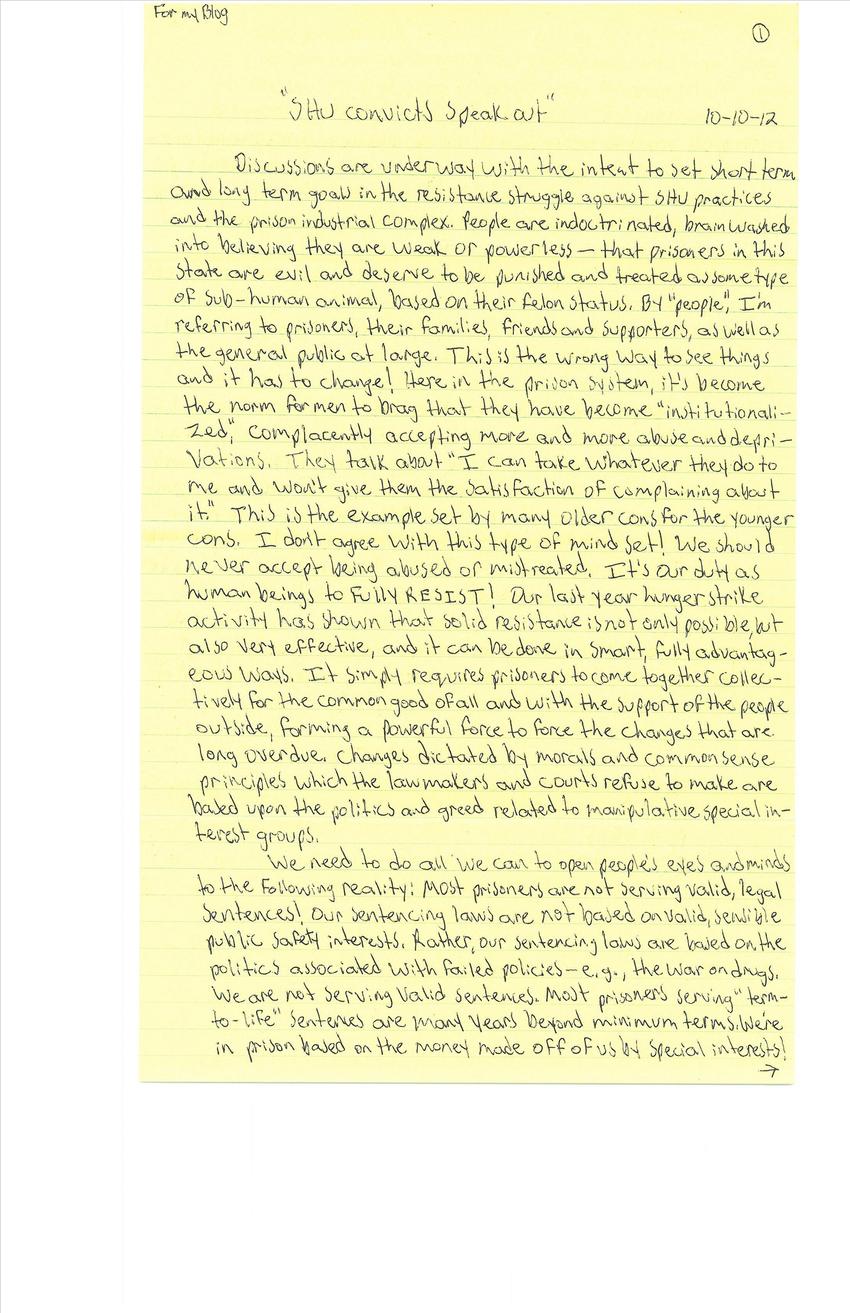 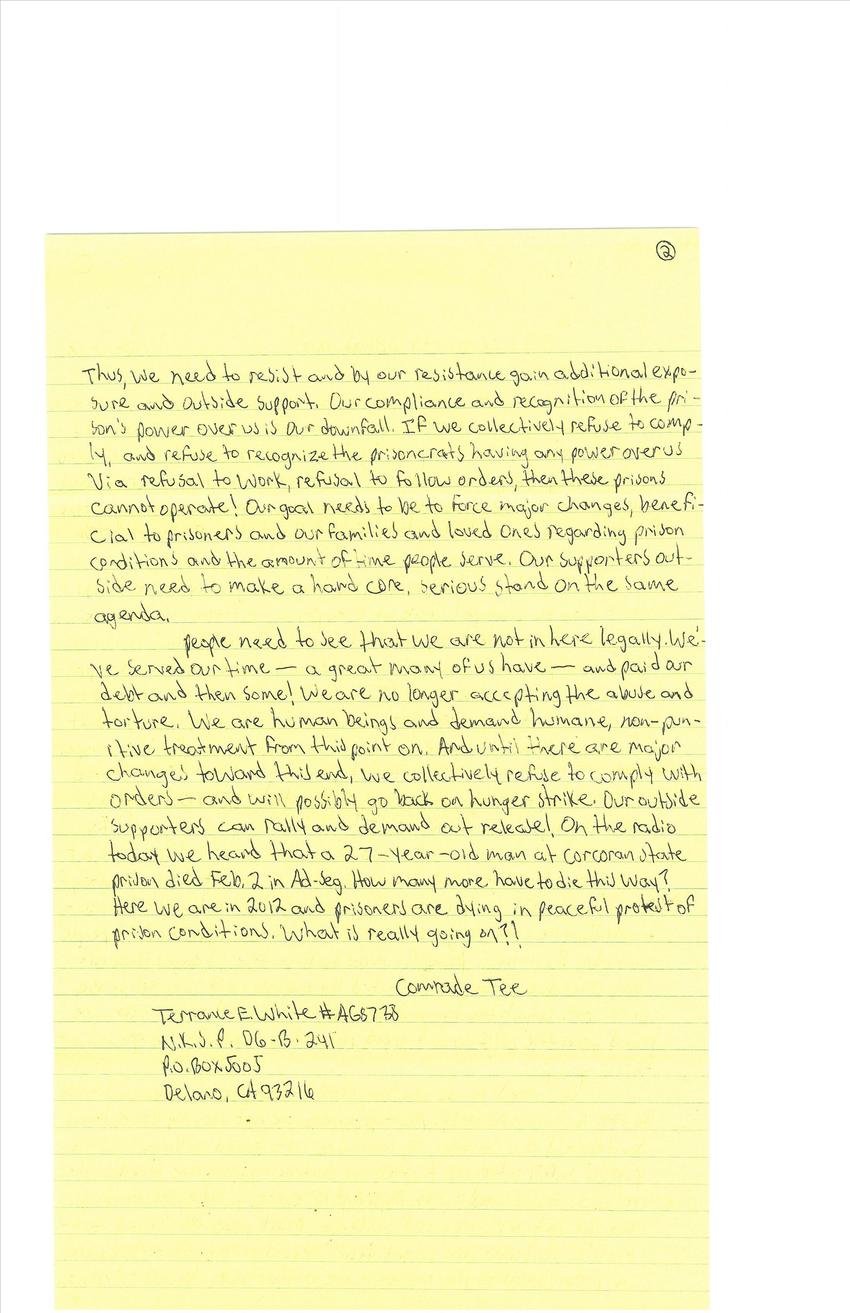 Discussions are underway with the intent to set short term and long term goals in the resistance struggle against SHU practices and the prison industrial complex. People are indoctrinated, brainwashed into believing they are weak or powerless - that prisoners in this state are evil and deserve to be punished and treated as some type of sub-human animal, based on their felon status. By "people", I'm referring to prisoners, their families, friends and supporters, as well as the general public at large. This is the wrong way to see things and it has to change! Here in the prison system, it's become the norm for men to brag that they have become "institutionalized", complacently accepting more and more abuse and deprivations. They talk about "I can take whatever they do to me and won't give them the satisfaction of complaining about it." This is the example set by many older cons for the younger cons. I don't agree with this type of mindset! We should never accept being abused or mistreated. It's our duty as human beings to FULLY RESIST! Our last year hunger strike activity has shown that solid resistance is not only possible, but also very effective, and it can be done in smart, fully advantageous ways. It simply requires prisoners to come together collectively for the common good of all and with the support of the people outside, forming a powerful force to force the changes that are long overdue. Changes dictated by morals and common sense principles which the lawmakers and courts refuse to make are based upon the politics and greed related to manipulative special interest groups.

We need to do all we can to open people's eyes and minds to the following reality: most prisoners are not serving valid, legal sentences! Our sentencing laws are not based on valid, sensible public safety interests. Rather, our sentencing laws are based on the politics associated with failed policies - e.g., the war on drugs. We are not serving valid sentences. Most prisoners serving "term-to-life" sentences are many years beyond minimum terms. We're in prison based on the money made off of us by special interests! Thus, we need to resist and by our resistance gain additional exposure and outside support. Our compliance and recognition of the prison's power over us is our downfall. If we collectively refuse to comply, and refuse to recognize the prisoncrats having any power over us via refusal to work, refusal to follow orders, then these prisons cannot operate! Our goal needs to be to force major changes, beneficial to prisoners and our families and loved ones regarding prison conditions and the amount of time people serve. Our supporters outside need to make a hard core, serious stand on the same agenda.

People need to see that we are not in here legally. We've served our time - a great many of us have - and paid our debt and then some! We are no longer accepting the abuse and torture. We are human beings and demand humane, non-punitive treatment from this point on. And until there are major changes toward this end, we collectively refuse to comply with orders - and will possibly go back on hunger strike. Our outside supporters can rally and demand our release! On the radio today we heard that a 27-year-old man at Corcoran State Prison died Feb. 2 in Ad-Seg. How many more have to die this way? Here we are in 2012 and prisoners are dying in peaceful protest of prison conditions. What is really going on?! 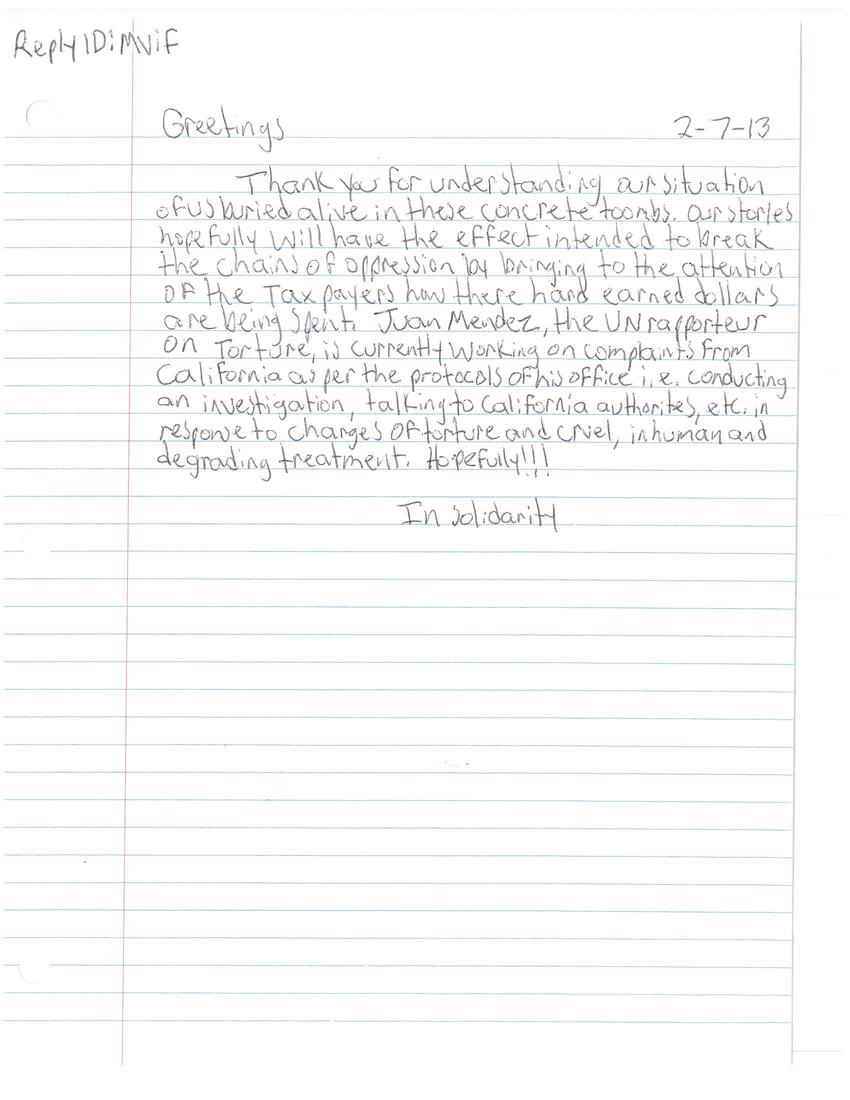