The Cycle Of Corruption 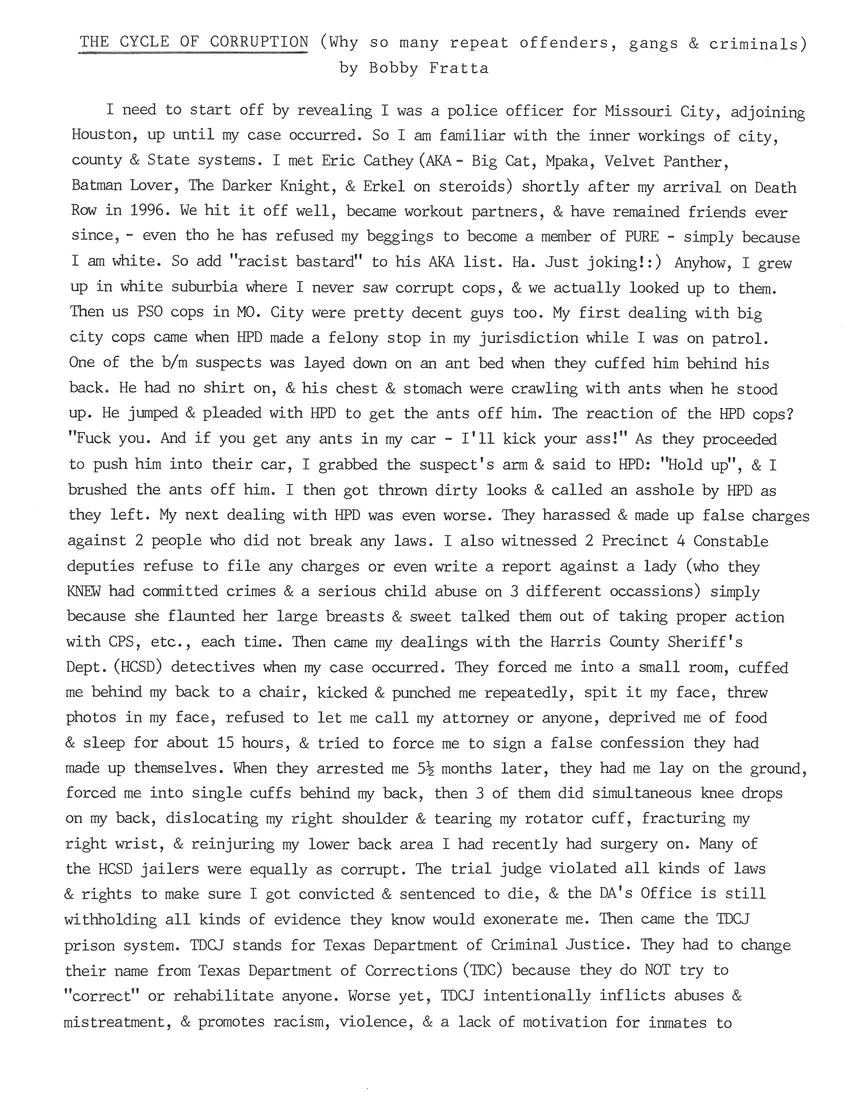 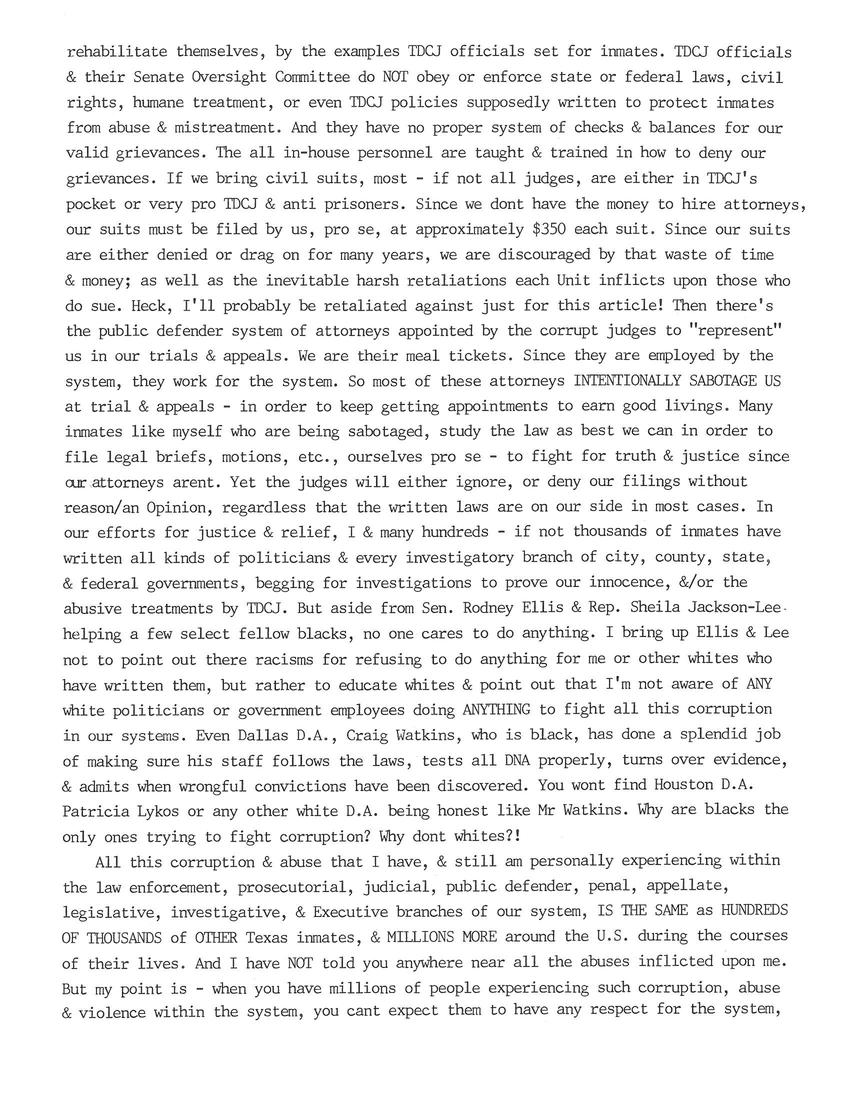 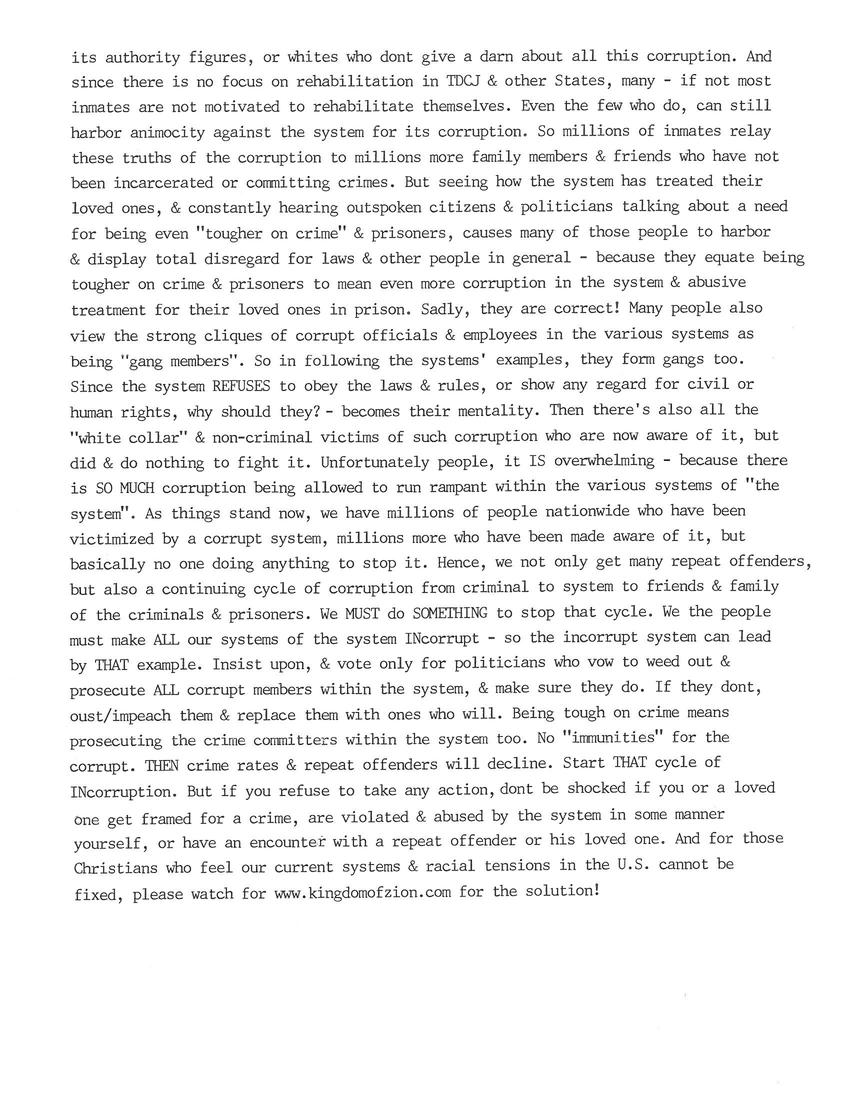 THE CYCLE OF CORRUPTION (Why so many repeat offenders, gangs & criminals)
by Bobby Fratta

All this corruption & abuse that I have, & still am personally experiencing within the law enforcement, prosecutorial, judicial, public defender, penal, appellate, legislative, investigative, & Executive branches of our system, IS THE SAME as HUNDREDS OF THOUSANDS of OTHER Texas inmates, & MILLIONS MORE around the U.S. during the courses of their lives. And I have NOT told you anywhere near all the abuses inflicted upon me. But my point is - when you have millions of people experiencing such corruption, abuse & violence within the system, you can't expect them to have any respect for the system, its authority figures, or whites who don't give a darn about all this corruption. And since there is no focus on rehabilitation in TDCJ & other States, many - if not most inmates are not motivated to rehabilitate themselves. Even the few who do, can still harbor animosity against the system for its corruption. So millions of inmates relay these truths of the corruption to millions more family members & friends who have not been incarcerated or committing crimes. But seeing how the system has treated their loved ones, & constantly hearing outspoken citizens & politicians talking about a need for being even "tougher on crime" & prisoners, causes many of these people to harbor & display total disregard for laws & other people in general - because they equate being tougher on crime & prisoners to mean even more corruption in the system & abusive treatment for their loved ones in prison. Sadly, they are correct! Many people also view the strong cliques of corrupt officials & employees in the various systems as being "gang members". So in following the systems' examples, they form gangs too. Since the system REFUSES to obey the laws & rules, or show any regard for civil or human rights, why should they? - becomes their mentality. Then there's also all the "white collar" & non-criminal victims of such corruption who are now aware of it, but did & do nothing to fight it. Unfortunately, people, it IS overwhelming - because there is SO MUCH corruption being allowed to run rampant within the various systems of "the system". As things stand now, we have millions of people nationwide who have been victimized by a corrupt system, millions more who have been made aware of it, but basically no one doing anything to stop it. Hence, we not only get many repeat offenders, but also a continuing cycle of corruption from criminal to system to friends & family of the criminals & prisoners. We MUST do SOMETHING to stop that cycle. We the people must make ALL our systems of the system INcorrupt - so the incorrupt system can lead by THAT example. Insist upon, & vote only for politicians who vow to weed out & prosecute ALL corrupt members within the system, & make sure they do. If they don't, oust/impeach them & replace them with ones who will. Being tough on crime means prosecuting the crime committers within the system too. No "immunities" for the corrupt. THEN crime rates & repeat offenders will decline. Start THAT cycle of INcorruption. But if you refuse to take any action, don't be shocked if you or a loved one get framed for a crime, are violated & abused by the system in some manner yourself, or have an encounter with a repeat offender or his loved one. And for those Christians who feel our current systems & racial tensions in the U.S. cannot be fixed, please watch for www.kingdomofzion.com for the solution!