Crossing Barriers In An Act Of Compassion 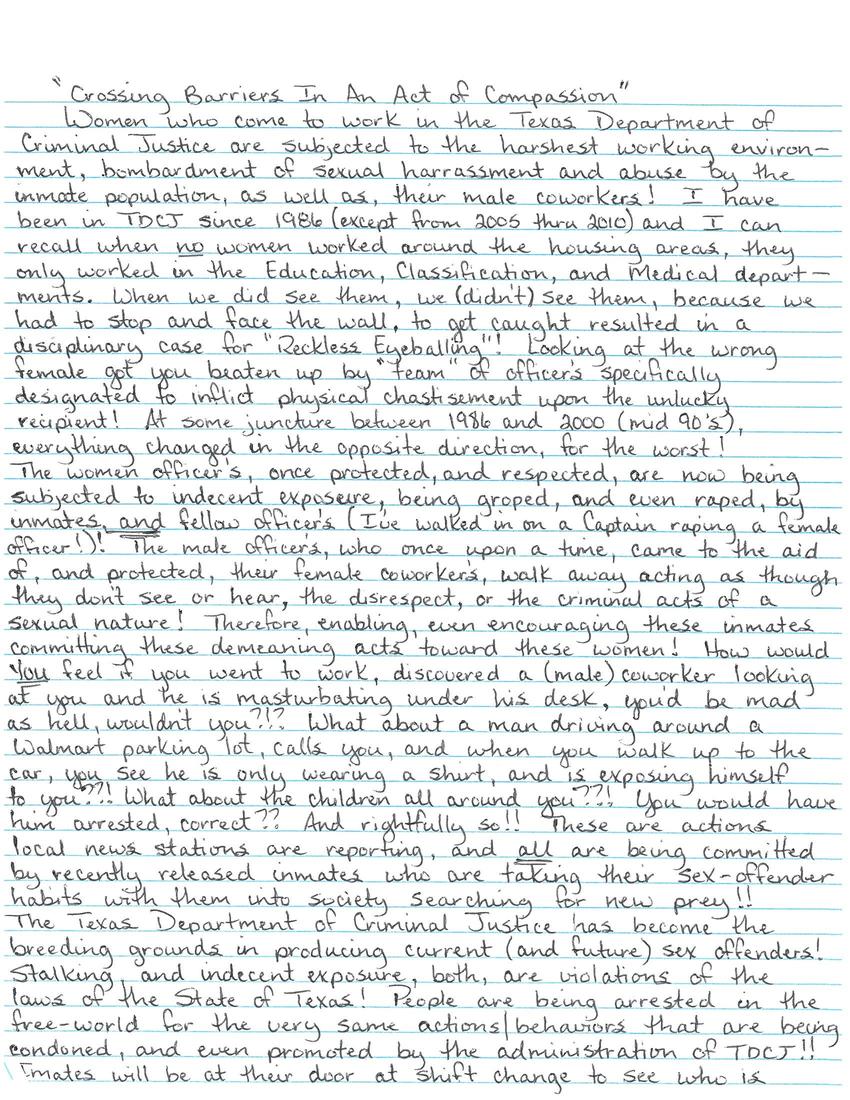 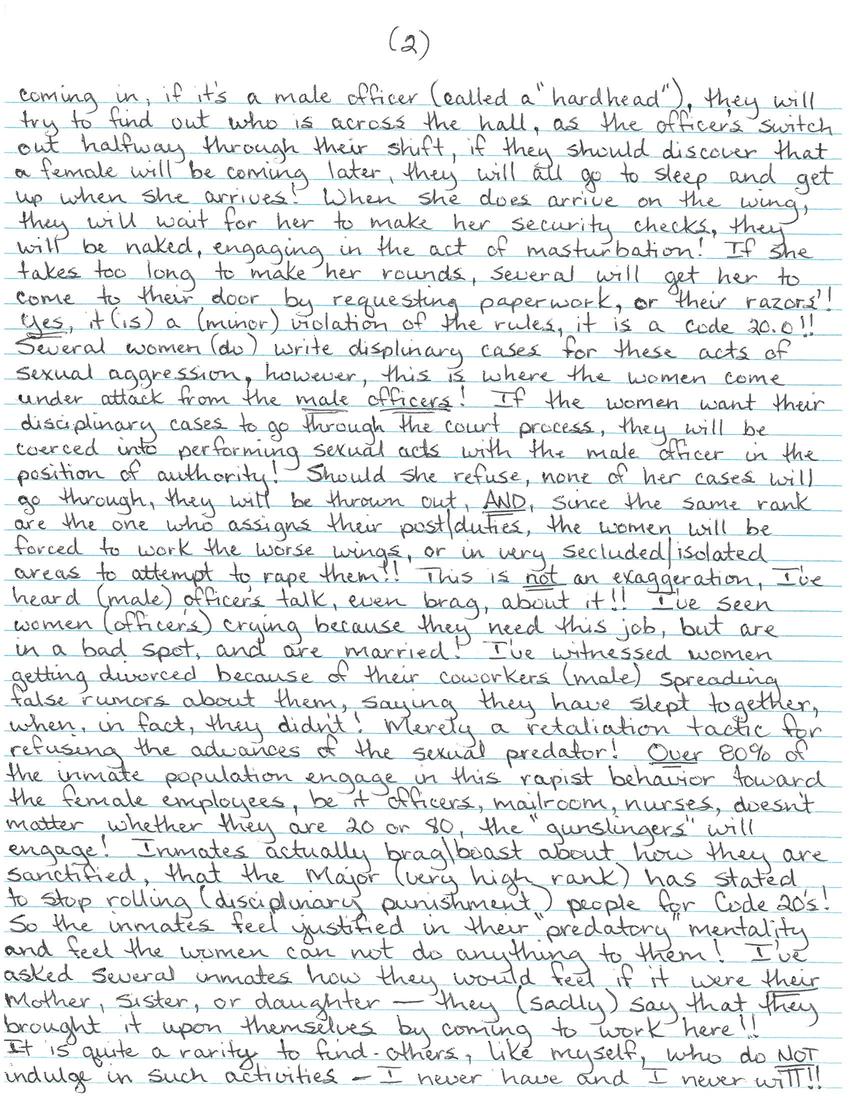 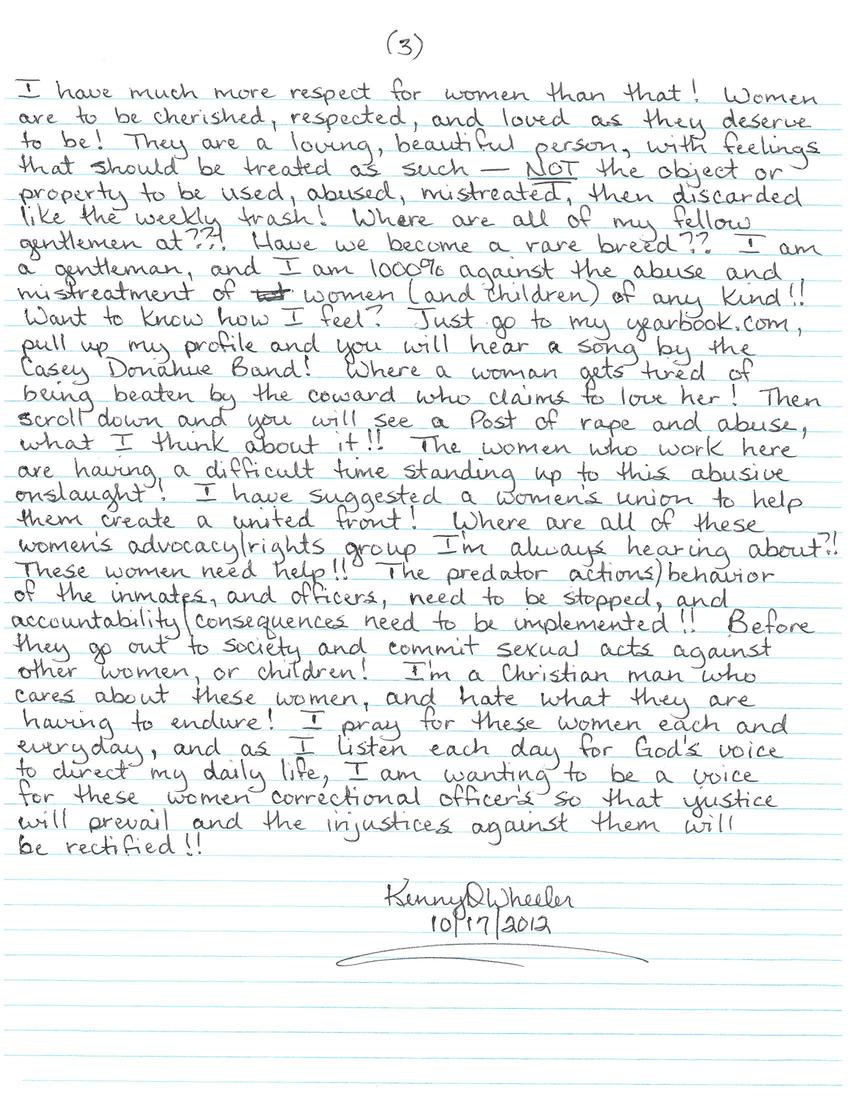 "Crossing Barriers in an Act of Compassion"

Women who come to work in the Texas Department of Criminal Justice are subjected to the harshest working environment, bombardment of sexual harassment and abuse by the inmate population, as well as their make co-workers! I have been in TDCJ since 1986 (except from 2005 thru 2010) and I can recall when NO women worked around the housing areas, they only worked in the Education, Classification and Medical departments. When we did see them, we (didn't) see them, because we had to stop and face the wall. To get caught resulted in a disciplinary case for "Reckless Eyeballing"! Looking at the wrong female got you beaten up by a "team" of officers specifically designated to inflict physical chastisement upon the unlucky recipient! At some juncture between 1986 and 2000 (mid 90s) everything changed in the opposite direction, for the worst!

The women officers, once protected and respected, are now being subjected to indecent exposure, being gropes, and even raped by inmates AND fellow officers! (I've walked in on a Captain raping a female officer!) The male officers, who once upon a time came to the aid of, and protected, their female co-workers, walk away acting as though they don't see or hear the disrespect or the criminal acts of a sexual nature! Therefore enabling, even encouraging these inmates committing these demeaning acts towards these women! How would YOU feel if you went to work, discovered a (male) co-worker looking at you and he is masturbating under his desk - you'd be mad as hell, wouldn't you?!? What about a man driving around a Walmart parking lot, calls you, and when you walk up to the car you see he is only wearing a shirt and is exposing himself to you?!? What about the children all around you??! You would have him arrested, correct?? And rightfully so!! These are actions local news stations are reporting, and ALL are being committed by recently released inmates who are taking their sex-offender habits with them into society searching for new prey!!

The Texas Department of Criminal Justice has become the breeding grounds in producing current (and future) sex offenders! Stalking and indecent exposure, both, are violations of the laws of the State of Texas! People are being arrested in the free world for the very same actions/behaviours that are being condoned, and even promoted by the administration of TDCJ!!

Inmates will be at their door at a shift change to see who is coming in; if it's a male officer (called a "hardhead"), they will try to find out who is across the hall, as the officers switch out halfway through their shift. If they should discover that a female will be coming later, they will all go to sleep and get up when she arrives! When she does arrive on the wing, they will wait for her to make her security checks; they will be naked, engaging in the act of masturbation! If she takes too long to make her rounds, several will get her to come to their door by requesting paperwork, or their razors! Yes, it (is) a (minor) violation of the rules, it is a code 20.0!!

Several women (do) write disciplinary cases for these acts of sexual aggression, however, this is where the women come under attack from the male officers! If the women want their disciplinary cases to go through the court process, they will be coerced into performing sexual acts with the male officer in the position of authority! Should she refuse, none of her cases will go through, they will be thrown out, AND, since the same rank are the ones who assign their post/duties, the women will be forced to work the worst wings, or in very secluded/isolated areas to attempt to rape them!! This is NOT an exaggeration; I've heard (male) officers talk, even brag about it!! I've seen women (officers) crying because they need this job but are in a bad spot, and are married! I've witnessed women getting divorced because of their co-workers (male) spreading false rumours about them, saying that they have slept together, when in fact they didn't! Merely a retaliation tactic for refusing the advances of the sexual predator! Over 80% of the inmate population engage in this rapist behavior towards the female employees, be if officers, mailroom, nurses doesn't matter whether they are 20 or 80, the "gunslingers" will engage! Inmates actually brag/boast about how they are sanctified, that the Major (very high rank) has stated to stop rolling (disciplinary punishment) people for Code 20s! So the inmates feel justified in their "predatory" mentality and feel the women cannot do anything to them!

I've asked several inmates how they would feel if it were their mother, sister or daughter - they (sadly) say that they brought it upon themselves by coming to work here!! It is quite a rarity to find others, like myself, who do NOT indulge in such activities - I never have and I never will!! I have much more respect for women than that! Women are to be cherished, respected and loved as they deserve to be! They are a loving, beautiful person, with feelings that should be treated as such - NOT the object or property to be used, abused, mistreated, then discarded like the weekly trash! Where are all my fellow gentlemen at??! Have we become a rare breed?? I am a gentleman, and I am 1000% against the abuse and mistreatment of women (and children) of an kind!! Want to knowhow I feel. Just go to my yearbook.com, pull up my profile and you will hear a song by the Casey Donahue Band! Where a woman gets fired of being beaten by the coward who claims to love her! Then scroll down and you will see a post of rape and abuse, what I think about it!!

The women who work here are having a difficult time standing up to this onslaught! I have suggested a women's union to help them create a united front! Where are all of these women's advocacy/rights groups I'm always hearing about?! These women need help!! The predatory actions/behaviour of the inmates and officers need to be stopped, and accountability/consequences need to be implemented!! Before they go out to society and commit sexual acts against other women, or children!

I'm a Christian man who cares about these women and I hate what they are having to endure! I pray for these women each and every day, and as I listen each day for God's voice to direct my daily life, I am wanting to be a voice for these women correctional officers so that justice will prevail and the injustices against them will be rectified!!

Hi Kenny, thanks for writing. It sounds like these women are incredibly brave to take such a difficult job, and should be given all the help they can get rather than being victimised in this way. Is there anything you think could help them with their situation?