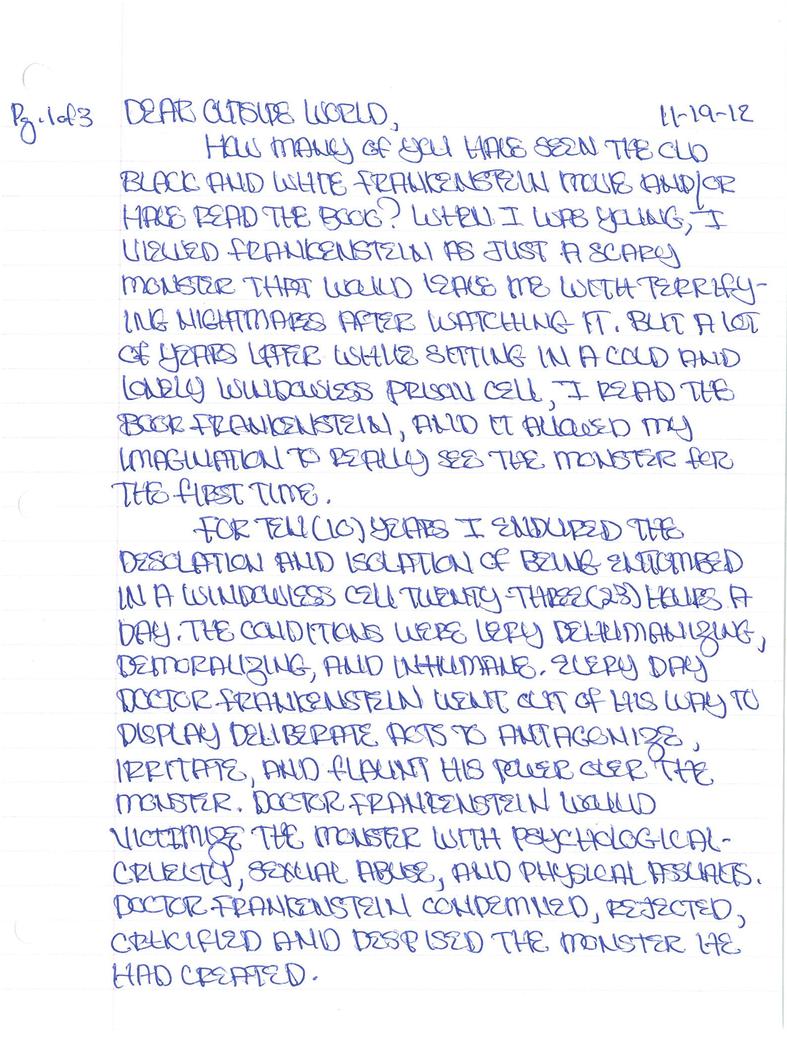 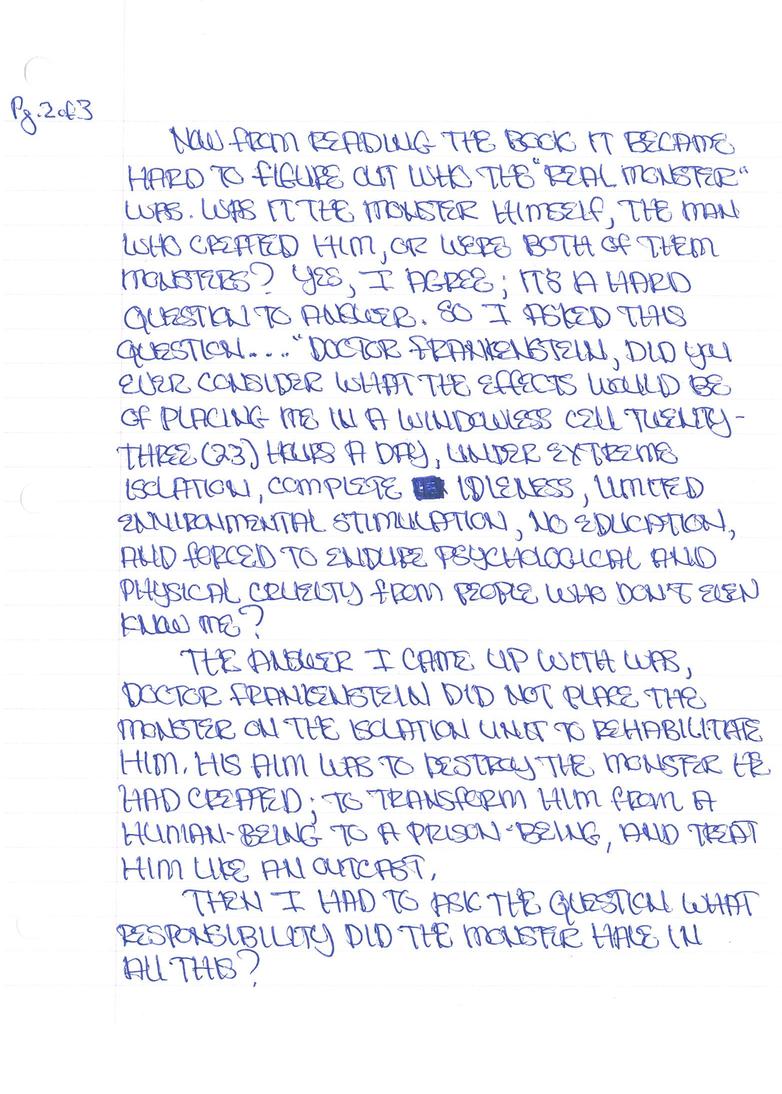 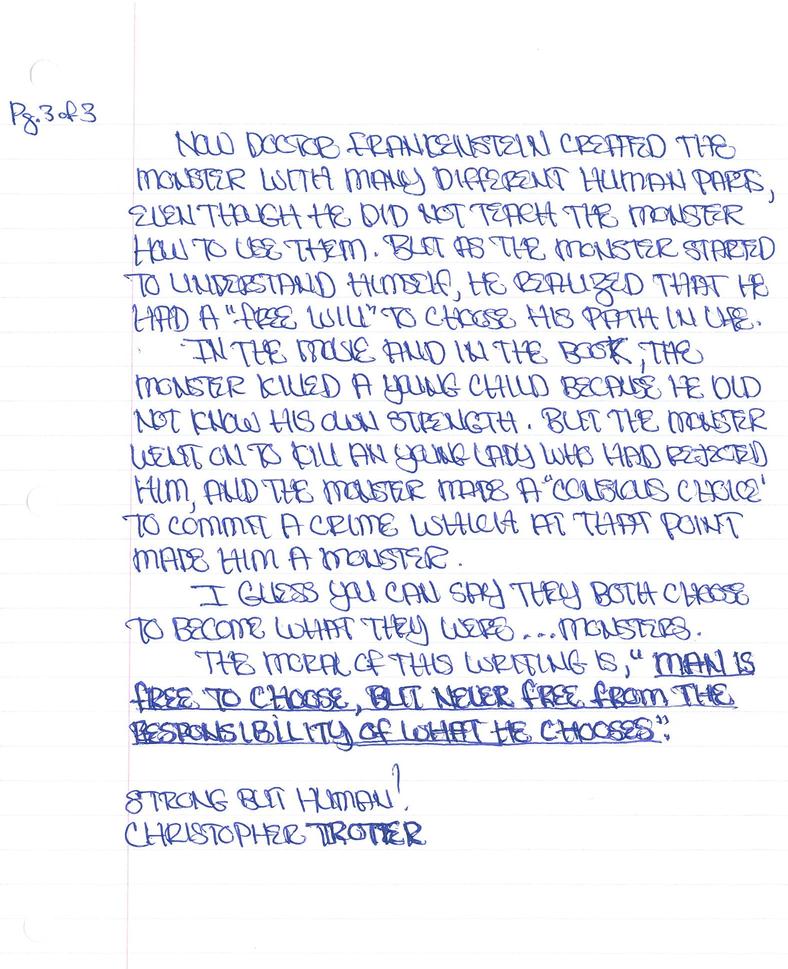 How many of you have seen the old black and white Frankenstein movie and/or have read the book? When I was young, I viewed Frankenstein as just a scary monster that would leave me with terrifying nightmares after watching it. But a lot of years later while sitting in a cold and lonely windowless prison cell, I read the book Frankenstein, and it allowed my imagination to really see the monster for the first time.

For ten (10) years I endured the desolation and isolation of being entombed in a windowless cell twenty-three (23) hours a day. The conditions were very dehumanizing, demoralizing, and inhumane. Every day Doctor Frankenstein went out of his way to display deliberate acts to antagonize, irritate, and flaunt his power over the monster. Doctor Frankenstein would victimize the monster with psychological cruelty, sexual abuse, and physical assaults. Doctor Frankenstein condemned, rejected, crucified and despised the monster he had created.

Now from reading the book, it became hard to figure out who the "real monster" was. Was it the monster himself, the man who created him, or were both of them monsters? Yes, I agree; it's a hard question to answer. So I asked this question... "Doctor Frankenstein, did you ever consider what the effects would be of placing me in a windowless cell twenty-three (23) hours a day, under extreme isolation, complete idleness, limited environmental stimulation, no education, and forced to endure psychological and physical cruelty from people who don't even know me?

The answer I came up with was, Doctor Frankenstein did not place the monster on the isolation unit to rehabilitate him. His aim was to destroy the monster he had created: to transform him from a human being to a prison being, and treat him like an outcast.

Then I had to ask the question, what responsibility did the monster have in all this?

Now Doctor Frankenstein created the monster with many different human parts, even though he did not teach the monster how to use them. But as the monster started to understand himself, he realized that he had a "free will" to choose his path in life.

In the movie and in the book, the monster killed a young child because he did not know his own strength. But the monster went on to kill a young lady who had rejected him, and the monster made a "conscious choice" to commit a crime, which at that point made him a monster.

I guess you can say they both choose to become what they were... monsters.

The moral of this writing is, "Man is free to choose, but never free from the responsibility of what he chooses".

PLEASE SUPPORT CHRISTOPHER. SIGN THIS PETITION AND TUNE INTO THE INTERVIEW ON 12/12/12 From 10:25-11:25pm Touch And Agree His Release Year Will Be 2013.
This was a powerful broadcast. Christopher, I admire your perserverence--the system has not destroyed your humanity. Also happy to hear that you have found love. Many blessings to you and your strong warrior woman.

jme.
Christopher Trotter is it possible for me to mail you a package with a small electronic music player and a book?
Hey Chris how are u doing well I love the tv show lock up and ur interview was awesome u seem like a really cool person I would like to come visit u sometime I do live in Canada tho brrrr it's so cole here 6 and a half feet of snow as well
Hello Chris, just wanted to say great post! I, too, have read "Frankenstein" several times, and every time I read it, I take away something new from it. A great book indeed.

Stay strong, and know that many people out here support you and hope you are well.

P.S.--are you allowed to receive books in the mail? I'd be very glad to send you some reading material (but only if you'd like, of course).
Words of Encouragement,God loves you and desire a closer relationship with you he want you to surrender your all to him he doesn't want you bound by religion or tradition but he want you bound by his Holy Word!
Dear Christopher,
just came across your blog and signed your petition on change.org. It is a while ago you wrote for this blog, I wonder why you stopped?
I wish you well, above all good health and freedom.
Julia
Keep praying,cause the God I serve is awesome and moves mountains.He can work miracles,anytime any day.So, keep believing and keep him 1st and u will be back out in the real world.you r in my prayers!!! Tobi Davis