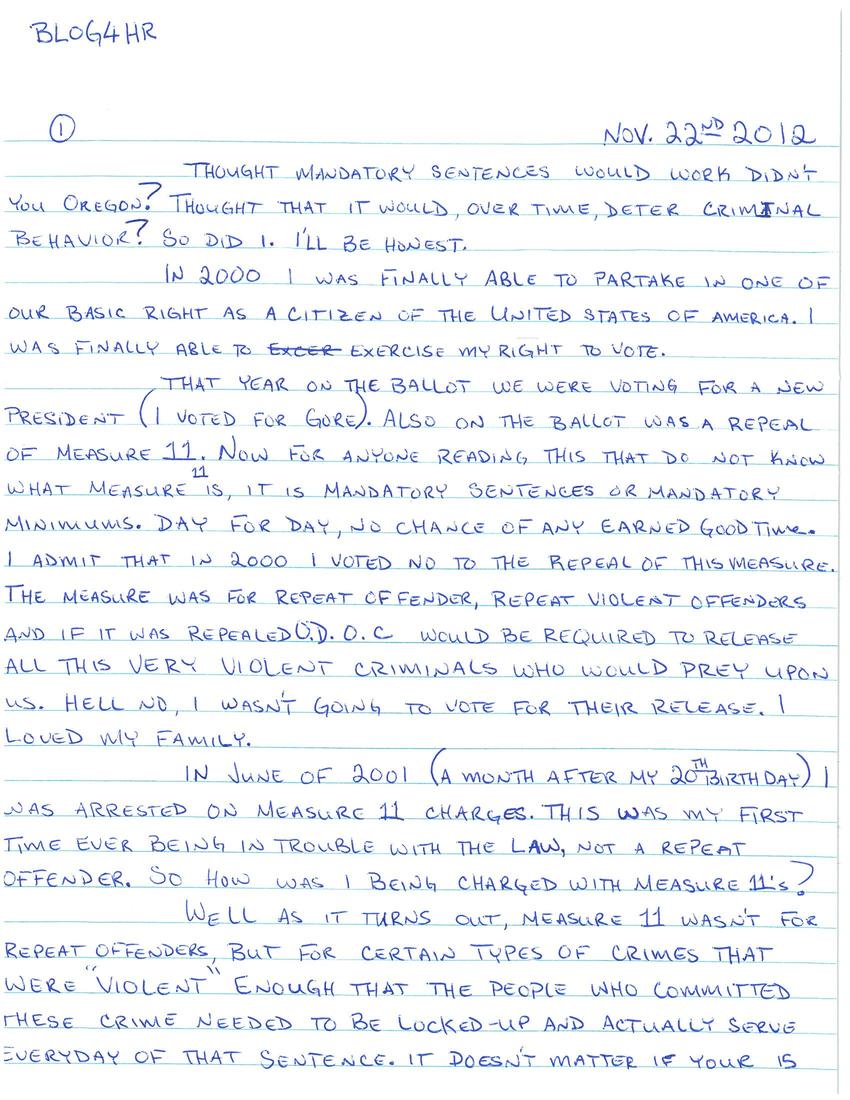 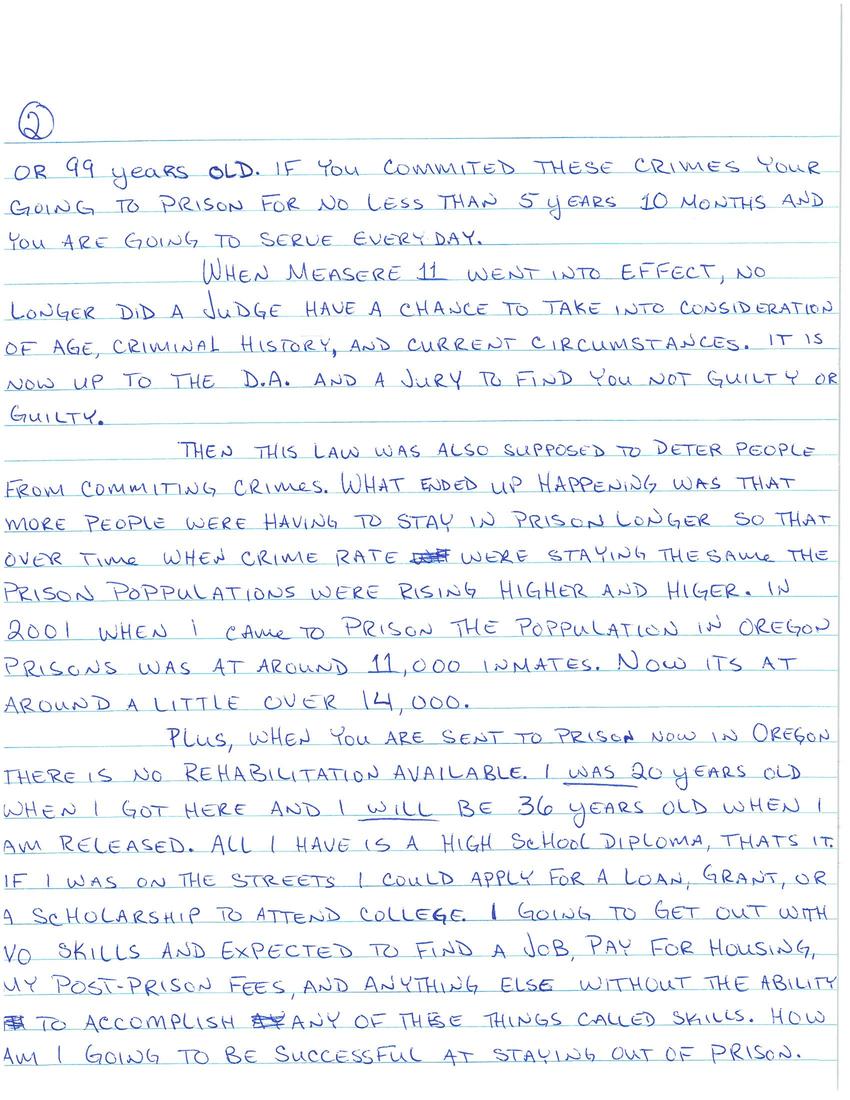 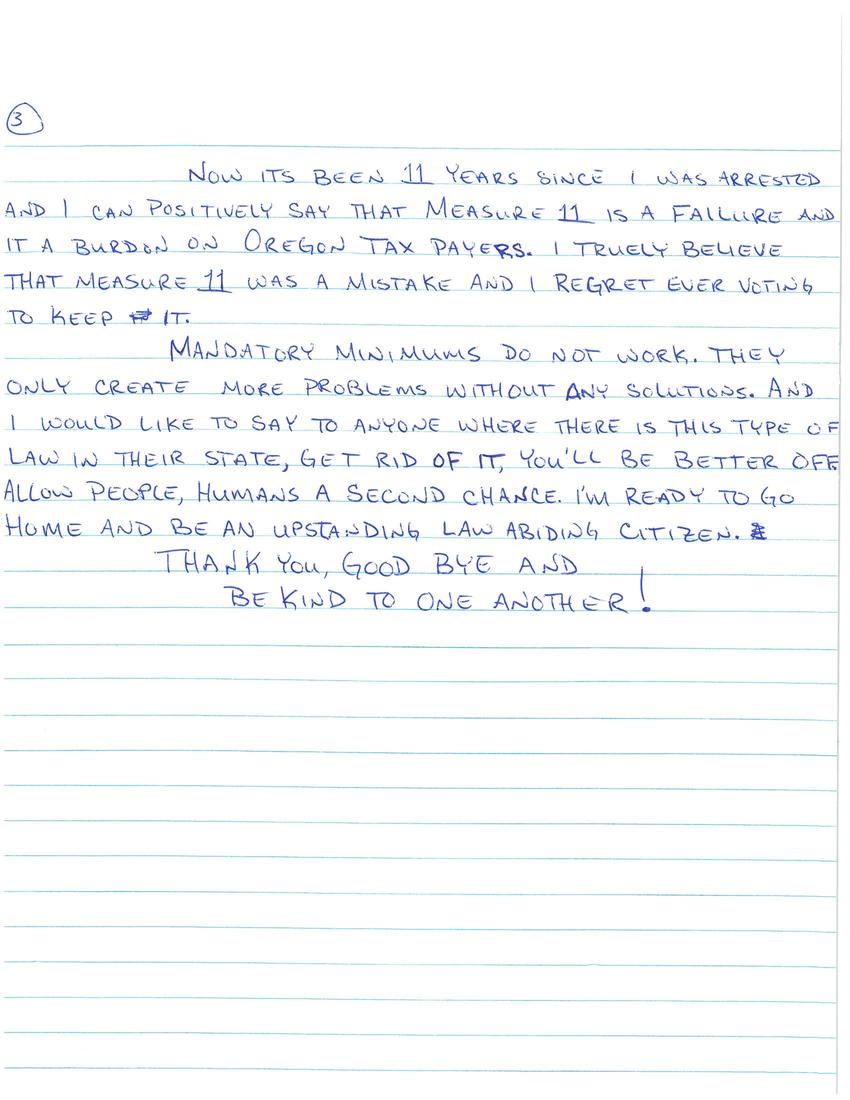 Thought mandatory sentences would work, didn't you, Oregon? Thought that it would, over time, deter criminal behavior? So did I. I'll be honest.

That year on the ballot we were voting for a new president (I voted for Gore). Also on the ballot was a repeal of Measure 11. Now for anyone reading this that do not know what Measure 11 is, it is mandatory sentences or mandatory minimums. Day for day, no chance of any earned good time. I admit that in 2000 I voted no to the repeal of this measure. The measure was for repeat offenders, repeat violent offenders and if it was repealed O.D.O.C. would be required to release all these very violent criminals who would prey upon us. Hell no, I wasn't going to vote for their release. I loved my family.

In June of 2001 (a month after my 20th birthday) I was arrested on Measure 11 charges. This was my first time ever being in trouble with the law, not a repeat offender. So how was I being charged with Measure 11's?

Well, as it turns out, Measure 11 wasn't for repeat offenders, but for certain types of crimes that were "violent" enough that the people who committed these crimes needed to be locked-up and actually serve every day of that sentence. It doesn't matter if you're 15 or 99 years old. If you committed these crimes, you're going to prison for no less than 5 years, 10 months and you are going to serve every day.

When Measure 11 went into effect, no longer did a judge have a chance to take into consideration of age, criminal history, and current circumstances. It is now up to the D.A. and a jury to find you not guilty or guilty.

Then this law was also supposed to deter people from committing crimes. What ended up happening was that more people were having to stay in prison longer so that over time when crime rates were staying the same, the prison populations were rising higher and higher. In 2001 when I came to prison, the population in Oregon prisons was at around 11,000 inmates. Now it's at around a little over 14,000.

Plus, when you are sent to prison now in Oregon, there is no rehabilitation available. I WAS 20 years old when I got here and I WILL be 36 years old when I am released. All I have is a high school diploma, that's it. If I was on the streets I could apply for a loan, grant, or a scholarship to attend college. I'm going to get out with no skills and expected to find a job, pay for housing, my post-prison fees, and anything else without the ability to accomplish any of these things called skills. How am I going to be successful at staying out of prison?

Now it's been 11 years since I was arrested and I can positively say that Measure 11 is a failure and it's a burden on Oregon taxpayers. I truly believe that Measure 11 was a mistake and I regret ever voting to keep it.

Mandatory minimums do not work. They only create more problems without any solutions. And I would like to say to anyone where there is this type of law in their state, get rid of it, you'll be better off. Allow people, humans, a second chance. I'm ready to go home and be an upstanding law abiding citizen.

Thank you, goodbye and be kind to one another!

If an offender commits a violent offense society needs to be protected from that person. You don't say what your offense was but if minimum sentence is 5 years 10 months and you got 16 years it seems that your crime was substantially more violent.

To decide that minimums don't work after being subject to one is understandable. I'm glad that you feel ready to re-join society. It is apparent that if you continue in your progress you will have learned your lesson and become a productive member of your community when you complete your sentence.
I wholeheartedly agree. What if your 15 year son got in in a fight ( as teenagers sometimes do) and he got assault charges. He would be sentenced as an adult and do at least 5 years 10months.I feel that people should be judged on an individual basis not one sentence fits all. This is coming from a mother of 4 kids that have never been in trouble. and have no reason to support reform except for the fact that measure11 is wrong