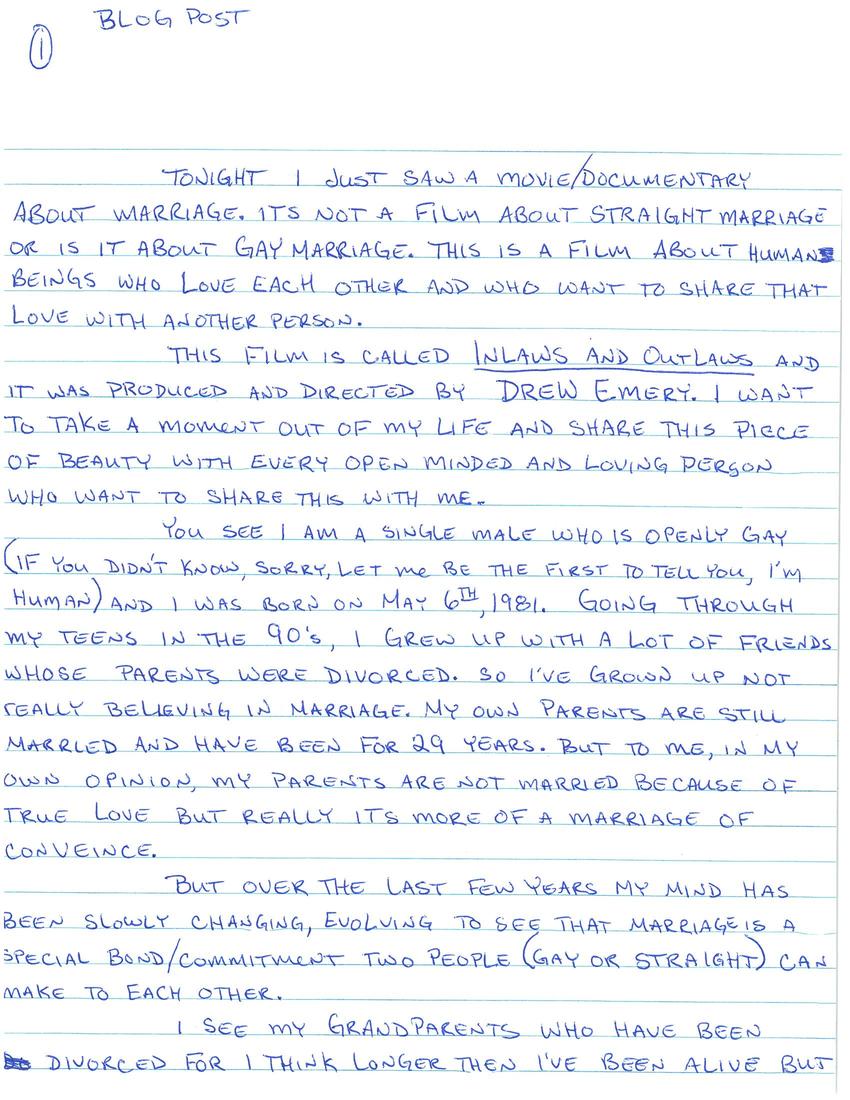 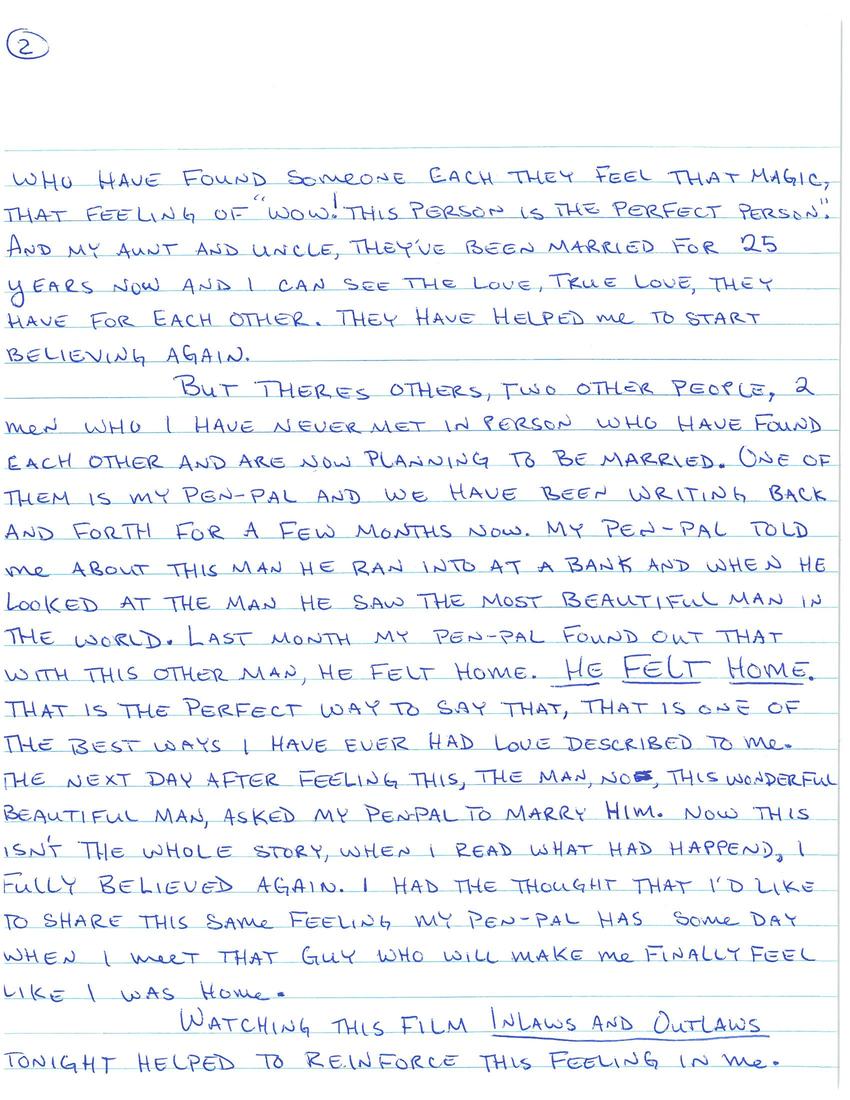 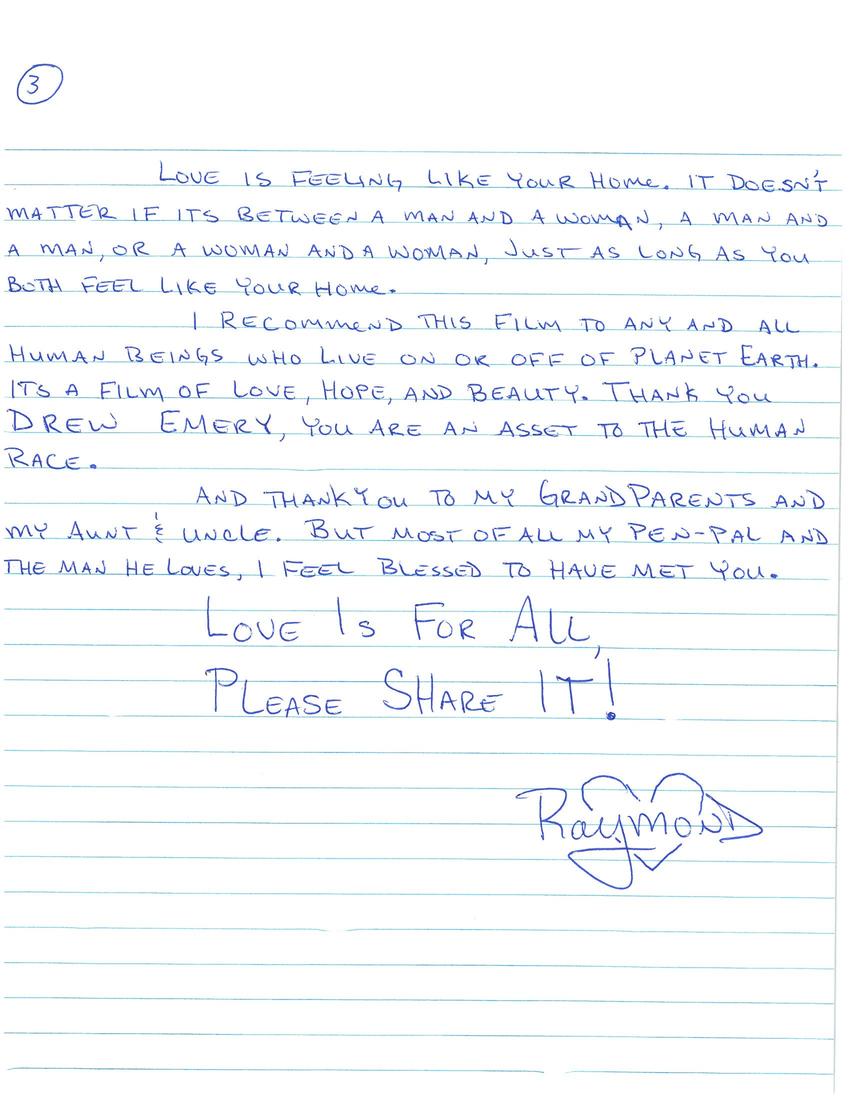 Tonight I just saw a movie/documentary about marriage. It's not a film about straight marriage, nor is it about gay marriage. This is a film about human beings who love each other and who want to share that love with another person.

This film is called Inlaws and Outlaws and it was produced and directed by Drew Emery. I want to take a moment out of my life and share this piece of beauty with every open minded and loving person who wants to share this with me.

You see, I am a single male who is openly gay (if you didn't know, sorry, let me be the first to tell you, I'm human) and I was born on May 6th, 1981. Going through my teens in the 90's, I grew up with a lot of friends whose parents were divorced. So I've grown up not really believing in marriage. My own parents are still married and have been for 29 years. But to me, in my own opinion, my parents are not married because of true love but really it's more of a marriage of convenience.

But over the last few years my mind has been slowly changing, evolving to see that marriage is a special bond/commitment two people (gay or straight) can make to each other.

I see my grandparents who have been divorced for I think longer than I've been alive but who have found someone each they feel that magic, that feeling of "Wow! This person is the perfect person". And my aunt and uncle, they've been married for 25 years now and I can see the love, true love, they have for each other. They have helped me to start believing again.

But there's others, two other people, 2 men who I have never met in person who have found each other and are now planning to be married. One of them is my pen-pal and we have been writing back and forth for a few months now. My pen-pal told me about this man he ran into at a bank and when he looked at the man he saw the most beautiful man in the world. Last month my pen-pal found out that with this other man, he felt home. HE FELT HOME. That is the perfect way to say that, that is one of the best ways I have ever had love described to me. The next day after feeling this, the man, no, this wonderful beautiful man, asked my pen-pal to marry him. Now this isn't the whole story, when I read what had happened, I fully believed again. I had the thought that I'd like to share this same feeling my pen-pal has some day when I meet that guy who will make me finally feel like I was home.

Watching this film Inlaws and Outlaws tonight helped to reinforce this feeling in me.

I recommend this film to any and all human beings who live on or off of Planet Earth. It's a film of love, hope, and beauty. Thank you, Drew Emery, you are an asset to the human race.

And thank you to my grandparents and my aunt & uncle. But most of all my pen-pal and the man he loves, I feel blessed to have met you.