To Ignore History is to Die 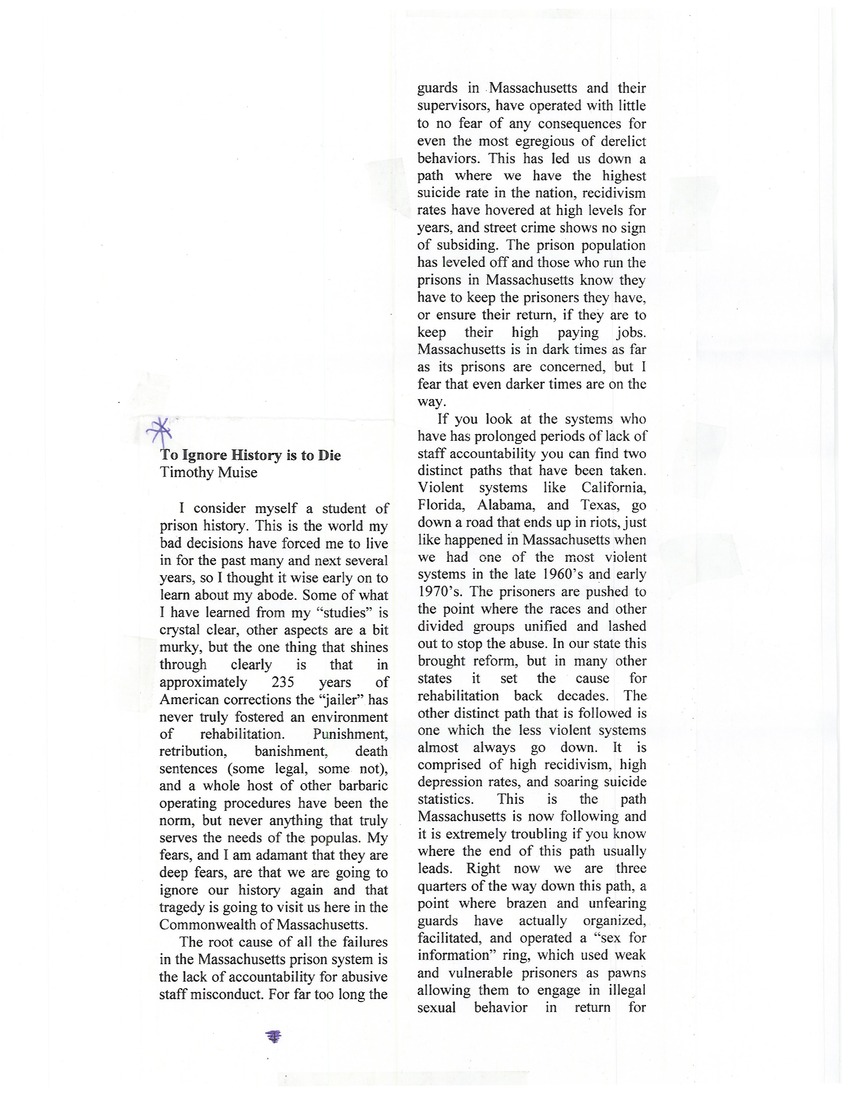 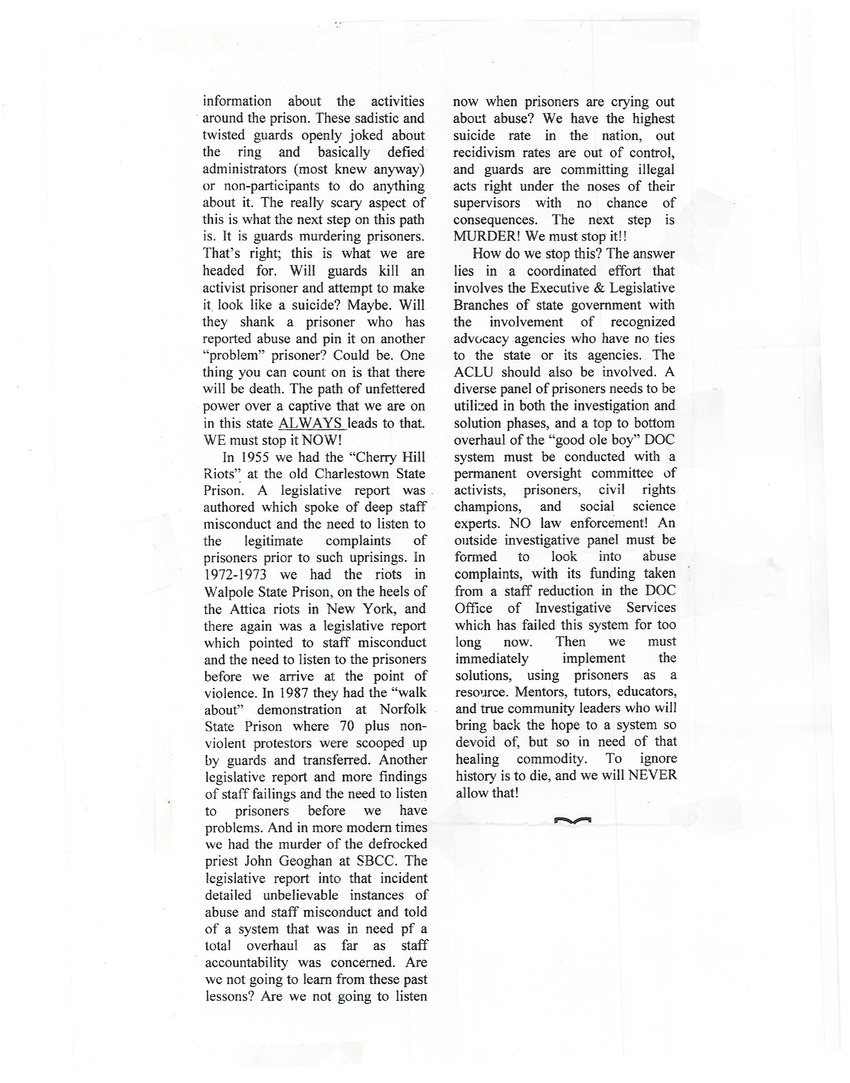 I consider myself a student of prison history. This is the world my bad decisions have forced me to live in for the past many and next several years, so I thought it wise early on to learn about my abode. Some of what I have learned from my "studies" is crystal clear, other aspects are a bit murky, but the one thing that shines through clearly is that in approximately 235 years of American corrections the "jailer" has never truly fostered an environment of rehabilitation. Punishment, retribution, banishment, death sentences (some legal, some not), and a whole host of other barbaric operating procedures have been the norm, but never anything that truly serves the needs of the populace. My fears, and I am adamant that they are deep fears, are that we are going to ignore our history again and that tragedy is going to visit us here in the Commonwealth of Massachusetts.

The root cause of all the failures in the Massachusetts prison system is the lack of accountability for abusive staff misconduct. For far too long the guards in Massachusetts and their supervisors, have operated with little to no fear of any consequences for even the most egregious of derelict behaviors. This had led us down a path where we have the highest suicide rate in the nation, recidivism rates have hovered at high levels for years, and street crime shows no sign of subsiding. The prison population has leveled off and those who runt the prisons in Massachusetts know they have to keep the prisoners they have, or ensure their return, if they are to keep their high paying jobs. Massachusetts is in dark times as far as its prisons are concerned, but I feel that even darker times are on the way.

If you look at the systems who have had prolonged periods of lack of staff accountability you can find two distinct paths that have been taken. Violent systems like California, Florida, Alabama and Texas, go down a road the ends up in riots, just like happened in Massachusetts when we had one of the most violent systems in the late 196O's and early 1970's. The prisoners are pushed to the point where the races and other divided groups unified and lashed out to stop the abuse. In our state, this has brought reform, but in many other states it set the cause for rehabilitation back decades. The other distinct path that is followed is one which the less violent systems almost always go down. It is comprised of high recidivism, his depression rates, and soaring suicide statistics. This is the path Massachusetts is now following and it is extremely troubling if you know where the end of this path usually leads. Right now we are three quarters of the way down this path, a point where brazen and unfearing guards have actually organized, facilitated, and operated a "sex for information" ring, which used weak and vulnerable prisoners as pawns allowing them to engage in illegal sexual behavior in return for information about the activities around the prison. These sadistic and twisted guards openly joked about the ring and basically defied administrators (most knew anyway) about it. The really scary aspect of this is what the next step on this path is. It is guards murdering prisoners. That's right; this is what we are headed for. Will guards kill an activist prisoner and attempt to make it look alike a suicide? Maybe. Will they shank a prisoner who has reported abuse and pin it on another "problem" prisoner? Could be. One thing you can count on is there will will be death. The path of unfettered power over a captive that we are on in this state ALWAYS leads to that. We must stop it NOW!

In 1955 we had the "Cherry Hill Riots" at the old Charlestown State Prison. A legislative report was authored which spoke of deep staff misconduct and the need to listen to the legitimate complains of prisoners prior to such uprisings. In 1972-1973 we had the riots in Walpole State Prison, on the heels of the Attica riots in New York, and there again was a legislative report which pointed to staff misconduct and the need to listen to the prisoners before we arrive at the point of violence. In 1987 they had the "walk about" demonstration at Norfolk State Prison where 70 plus non-violent protesters were scooped up by guards and transferred. Another legislative report and more findings of staff failing and the need to listen to prisoners before we have problems. And in more modern times we had the murder of the defrocked priest John Geoghan at SBCC. The legislative report into that incident detailed unbelievable instances of abuse and staff misconduct and told of a system that was in need of a total overhaul as far as staff accountability was concerned. Are we not going to learn from the past lesson? Are we not going to listen now when prisoners are crying out about abuse? We have the highest suicide rate in the nation, our recidivism rates are out of control, and guards are committing illegal acts right under the noses of their supervisors with no chance of consequences. The next step is MURDER! We must stop it!!

How do we stop this? The answer lies in a coordinated effort that involves the Executive & Legislative branches of state government with the involvement of recognized advocacy agencies who have no ties to the state or its agencies. The ACLU should also be involved. A diverse panel of prisoners needs to be utilized in both the investigation and solution phases, and a top to bottom overhaul of the "good ole boy" DOC system must be conducted with a permanent oversight committee of activists, prisoners, civil rights champions and social science experts. NO law enforcement! An outside investigative panel must be formed to look into abuse complaints, with its findings taken from a staff reduction in the DOC Office of Investigative Services which has failed this system for too long now. Then we must immediately implement the solutions, using prisoners as a resource. Mentors, tutors, educators and true community leaders who will bring back the hope to a system so devoid of, but so in need of that healing commodity. To ignore history is to die, and we will NEVER allow that!