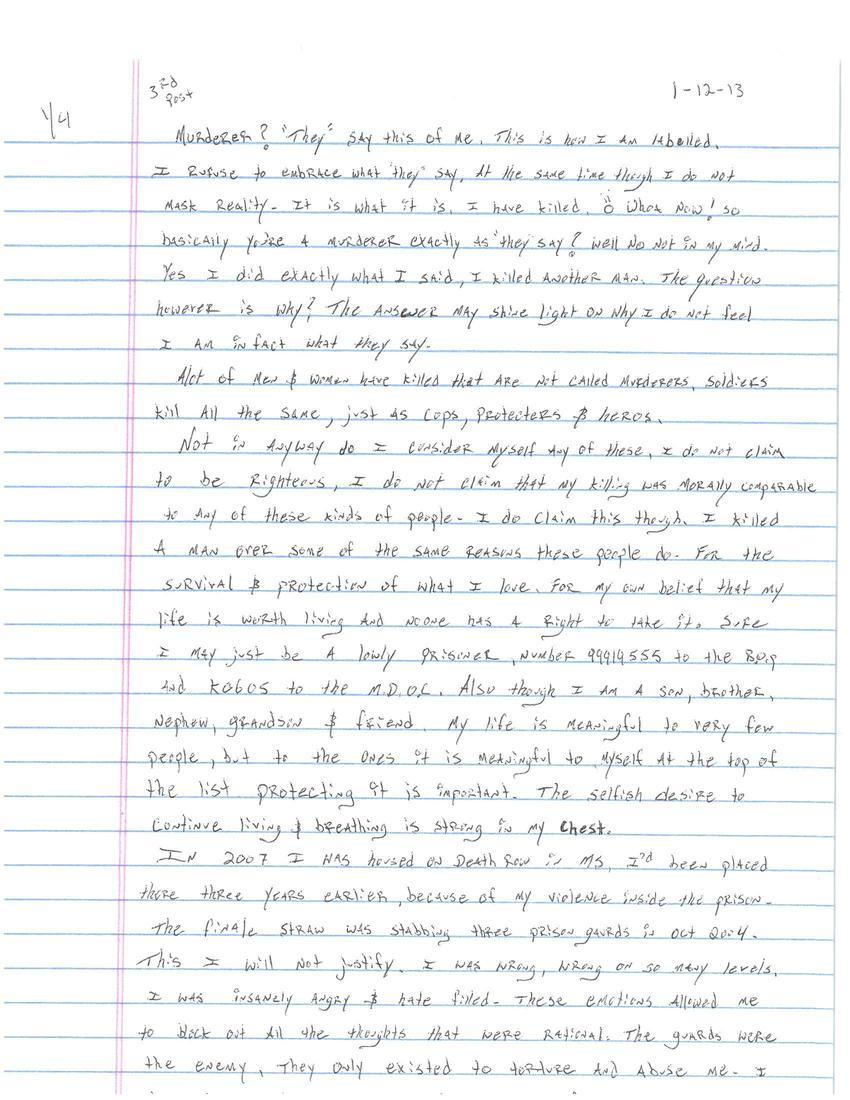 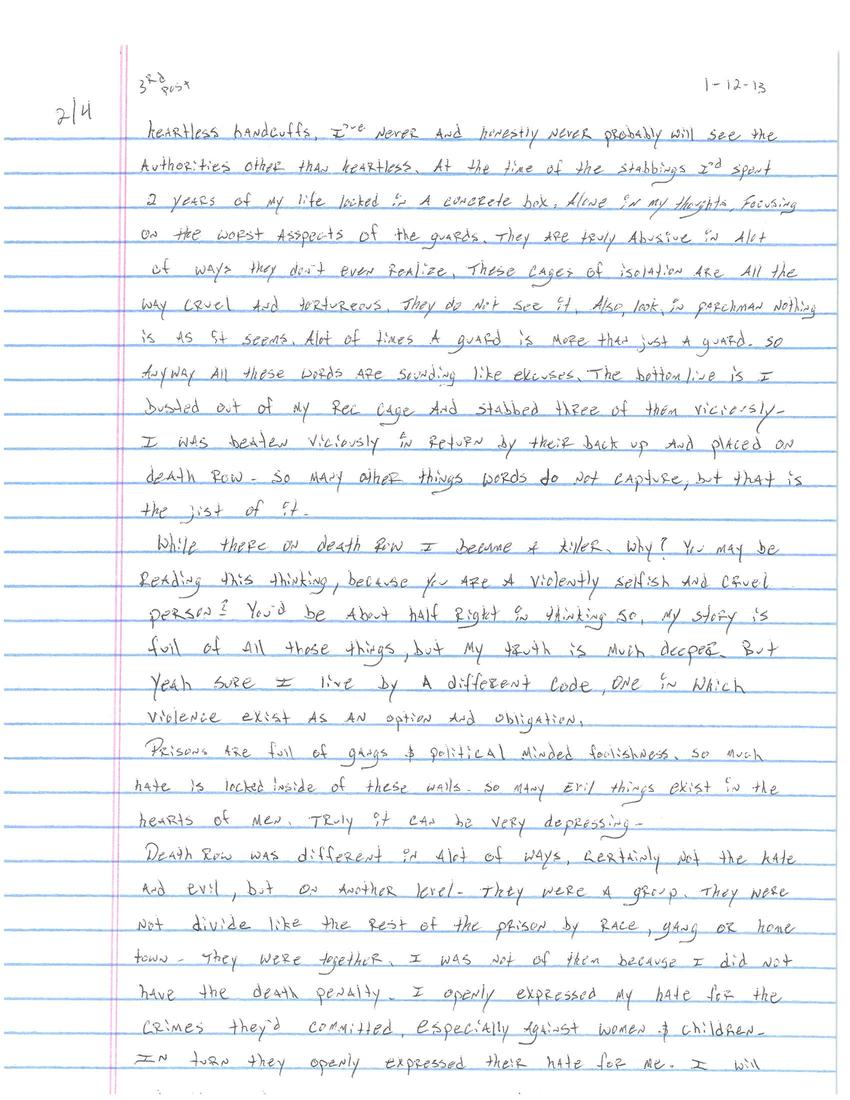 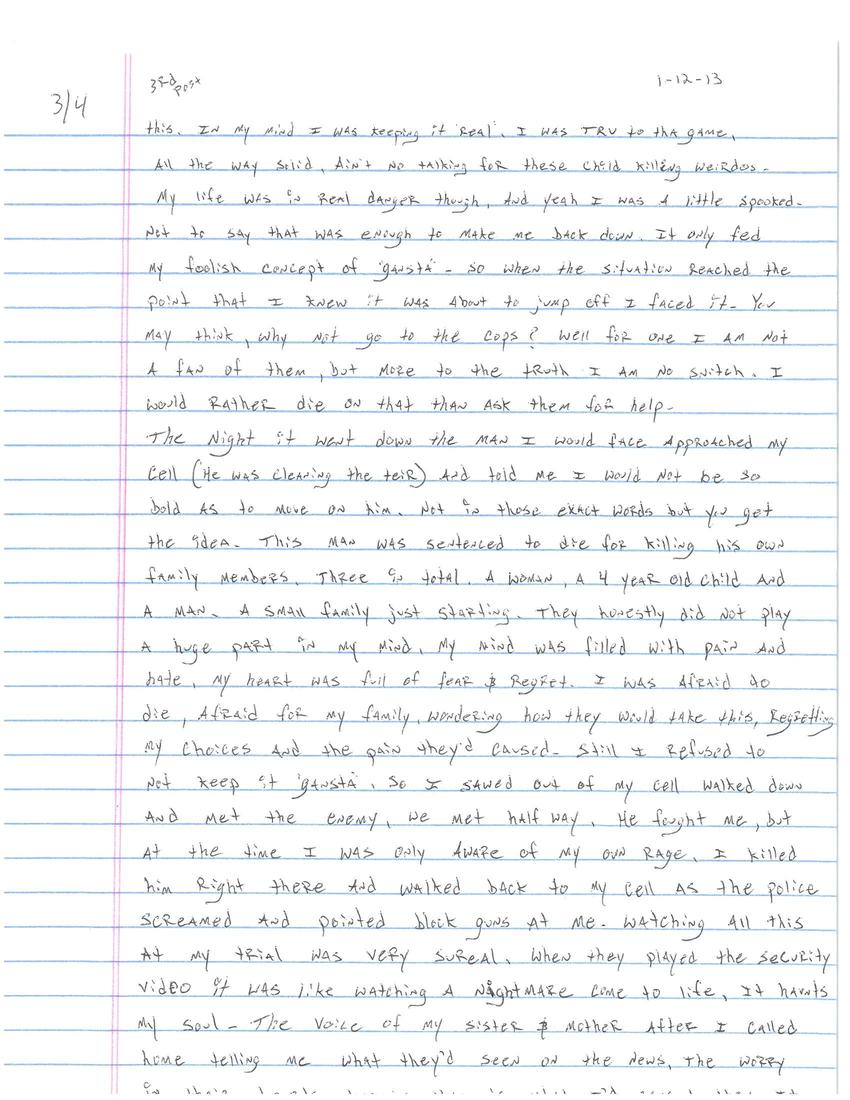 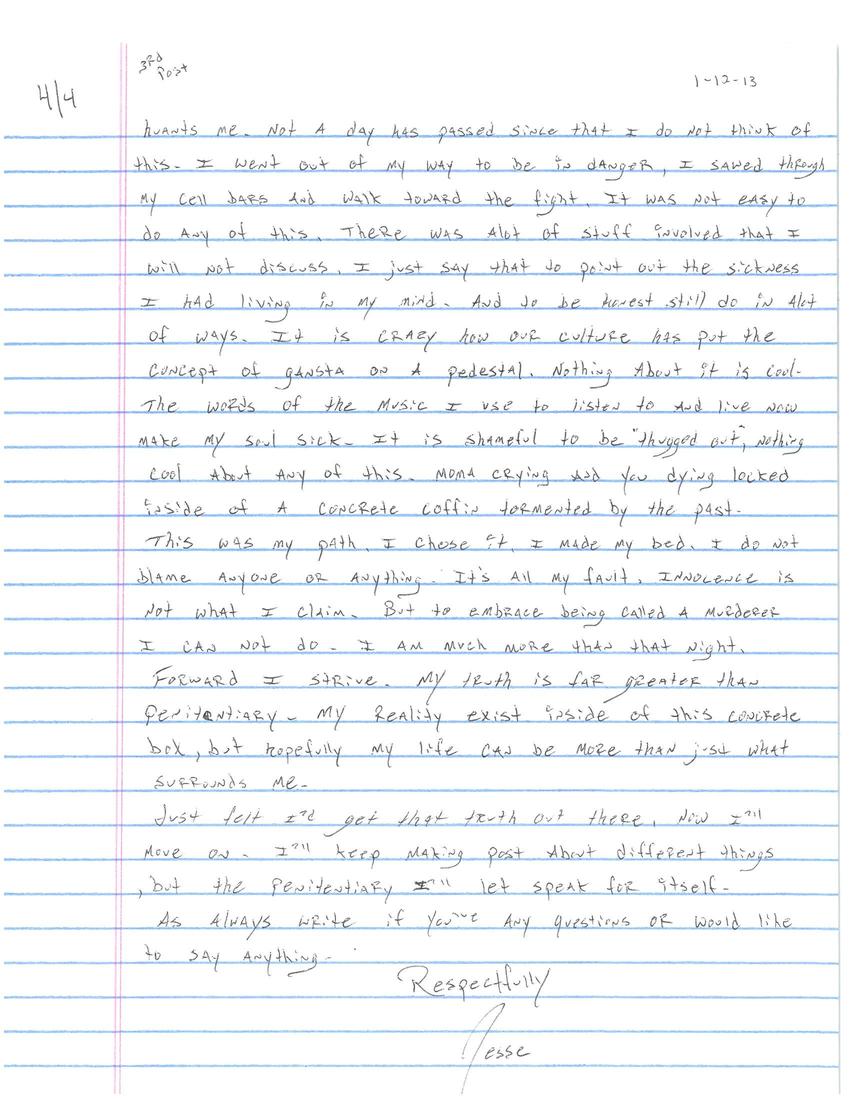 Murderer? "They" say this of me. This is how I am labelled. I refuse to embrace what "they" say. At the same time though I do not mask reality. It is what it is. I have killed. What now! So basically you're a murderer exactly as "they" say? Well no not in my mind. Yes I did exactly what I said. I killed another man. The question however is why? The answer may shine light on why I do not feel I am in fact what they say.

A lot of men and women have killed that are not called murderers, soldiers kill all the same, just as cops, protectors and heroes.

Not in any way do I consider myself any of those, I do not claim to be righteous, I do not claim that my killing was morally comparable to any of these kinds of people. I do claim this though, I killed a man over some of the same reasons these people do. For the survival and protection of what I love. For my own belief that my life is worth living and no-one had a right to take it. Sure I may just be a lonely prisoner, number 99919555 to the (?) and kobos to the M.D.O.C. Also though I am a son, brothers, newphew, grandson and friend. My life is meaningful to myself at the top of the list protecting it is important. The selfish desire to continue living and breathing is strong in my chest.

In 2007 I was housed on Death Row in MS, I'd been placed there three years earlier, because of my violence inside the prison. The final straw was stabbing three prison guards in Oct 2004. This I will not justify. I was wrong, wrong on so many levels. I was insanely angry and hate-filled. These emotions allowed me to block out all the thoughts that were rational. The guards were the enemy, they only existed to torture and abuse me. In heartless handcuffs. I've never and honestly never probably will see the authorities other than heartless. At the time of the stabbings I'd spent 2 years of my life locked in a concrete box, alone in my thoughts, focusing on the worst aspects of the guards. They are truly abusive in a lot of ways they don't even realise. These cages of isolation are all the way cruel and torturous. They do not see it. Also, look, in parchman nothing is as it seems. A lot of times a guard is more than just a guard. So anyway all these words are sounding like excuses, the bottom line is I busted out of my rec cage and stabbed three of them viciously. I was beaten viciously in return by their back-up and placed on death row - so many other things words do not capture, but that is the jist of it.

While there on death row I became a killer, why? You may be reading this thinking, because you are a violently selfish and cruel person? You'd be about half right in thinking so, my story is full of all these things, but my truth is much deeper. But yeah sure I live by a different code, one in which violence exists as an option and obligation.

Prisons are full of gangs and political-minded foolishness, so much hate is locked inside of these walls. So many evil things exist in the hearts of men. Truly it can be very depressing.

Death Row was different in a lot of ways, certainly not the hate and evil, but on another level. They were a group, they were not divided like the rest of the prison by race, gang or home town. They were together, I was not of them because I did not have the death penalty. I openly expressed my hate for the crimes they'd committed, especially against women and children. In turn they openly expressed their hate for me. I will (?) this. In my mind I was keeping it real. I was true to the game, all the way solid, ain't no talking for these child-killing weirdos. My life was in real danger though, and yeah I was a little spooked. Not to say that was enough to make me back down. It only fed my foolish concept of "gangsta" - so when the situation reached the point that I knew it was about to jump off I faced it. You may think, why not go to the cops? Well for one I am not a fan of them, but more to the truth I am no snitch. I would rather die on that than ask for help.

The night it went down the man I would face approached my cell (he was cleaning the tier) and told me I would not be so bold as to move on him. Not in those exact words but you get the idea. This man was sentenced to die for killing his own family members. Three in total. A woman, a 4 year old child and a man. A small family just starting. They honestly did not play a huge part in my mind, my mind was filled with pain and hate, my heart was full of fear and regret. I was afraid to die, afraid for my family, wondering how they would take this, regretting my choices and the pain they'd caused. Still I refused to not keep it "gangsta," so I sawed out of my cell walked down and met the enemy, we met halfway. He fought me, but at the time I was only aware of my own rage. I killed him right there and walked back to my cell as the police screamed and pointed black guns at me. Watching all this at my trial was very surreal. When they played the security video it was like watching a nightmare come to life. It haunts my soul - the voice of my sister and mother after called home telling me what they'd seen on the news, the worry (?) haunts me. Not a day had passed since that I do not think of this. I went out of my way to be in danger, I sawed through my cell bars and walked towards the fight. It was not easy to do any of this. There was a lot of stuff involved that I will no discuss. I just say that to point out the sickness I had living in my mind. And to be honest still do in a lot of ways. It is crazy how our culture has put the concept of gangsta on a pedestal. About it is cool - the words of the music I used to listen to and live now make my soul sick. It is shameful to be "thugged out," nothing cool about any of this. Momma crying and you dying locked inside of a concrete coffin tormented by the past.

This was my path, I chose it, I made my bed, I do not blame anyone or anything. It's all my fault, innocence is not what I claim. But to embrace being called a murderer I can not do. I am much more than that night. Forward I strive. My truth is far greater than penitentiary - my reality exists inside of this concrete box, but hopefully my life can be more than just what surrounds me.

Just felt I'd like to get the truth out there, now I'll move on. I'll keep making posts about different things but the penitentiary I'll let speak for itself. As always write if you've any questions or would like to say anything.

I understand on the one hand why words are important, but on the other hand I think the point is less whether you are or are not a murderer and more that whatever you have done your life is still important and still has value. Obviously I recognize what you did is very very serious and I'm glad you acknowledge that, but it's done. You're still here and you still matter. I'm guessing you will be paying the consequences for a long time and I don't think more should be asked of you than that.
I have nothing but respect for you. You could have lied about the stabbing of the guards and the killing of that man, but you didn't. You put it out there and you were honest. You don't blame others for your situation; you don't want pity from others. Most would not be able to handle all of this in the way that you have. This is why I am proud to call you my brother. I love you!

Tiffany
You r an amazing man Jessie.... I'm so proud of you and pround to say I know you... we haven't written ib a long time but I promise ill write soon....

Jess
Is this the Jessie that has a momma named Kelly and a sister named Tiffany? And you lived in gulfport
(scanned reply – view as blog post)
uploaded April 22, 2019.  Original (PDF) 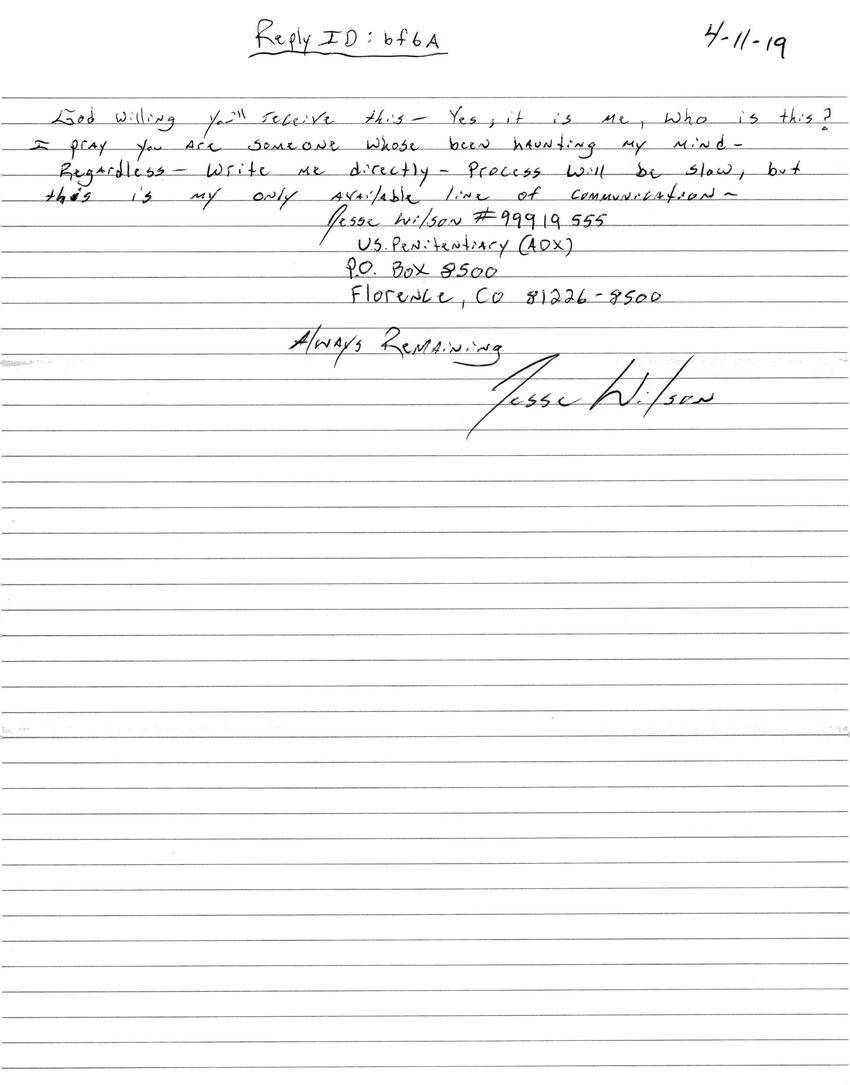 This is Nick Cuevas' old lady. He mentions you often and told me to look u up. Your writing captures my interest. You must be intelligent. Fine line between a genius and a lunatic. I guess, if I had to accept dedicating my life to incarceration, I'd let my soul fly by filling up with an extreme emotion and go all out by killing folks. Hard to say. Anyway. Good talk
Nick says he loves you. I told him write you . You artwork much?