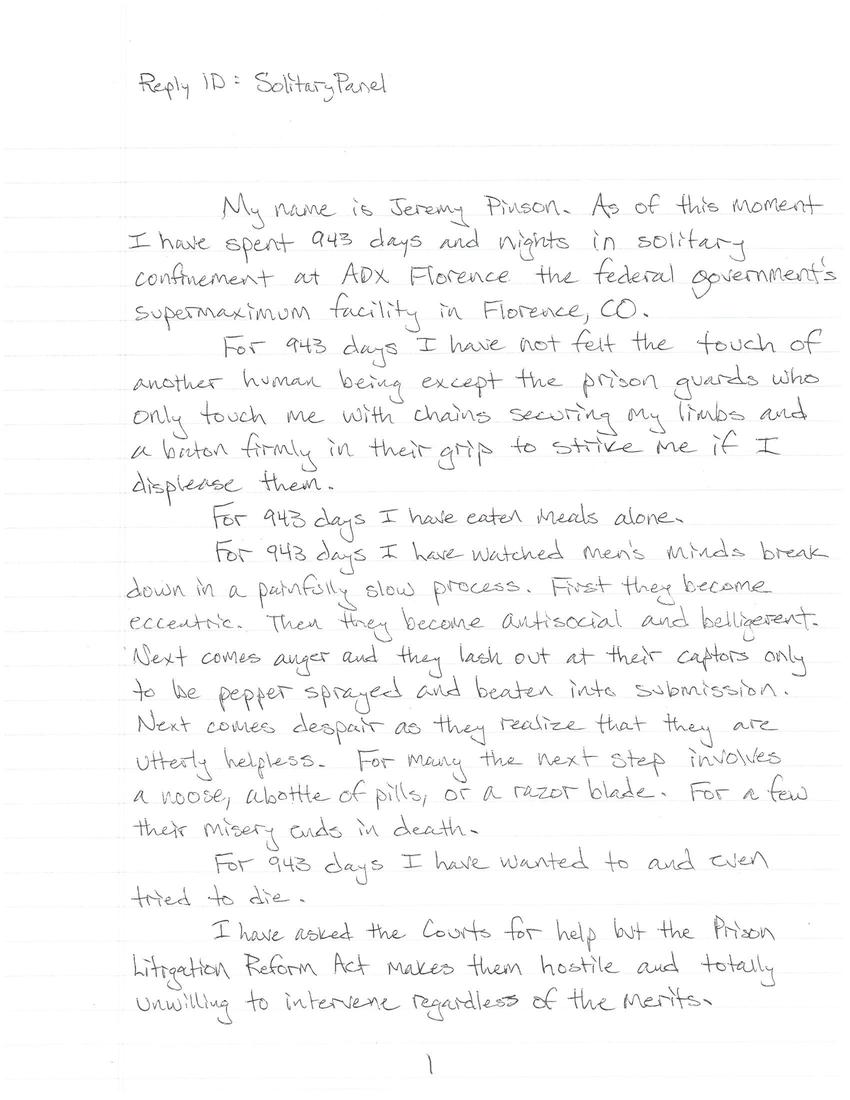 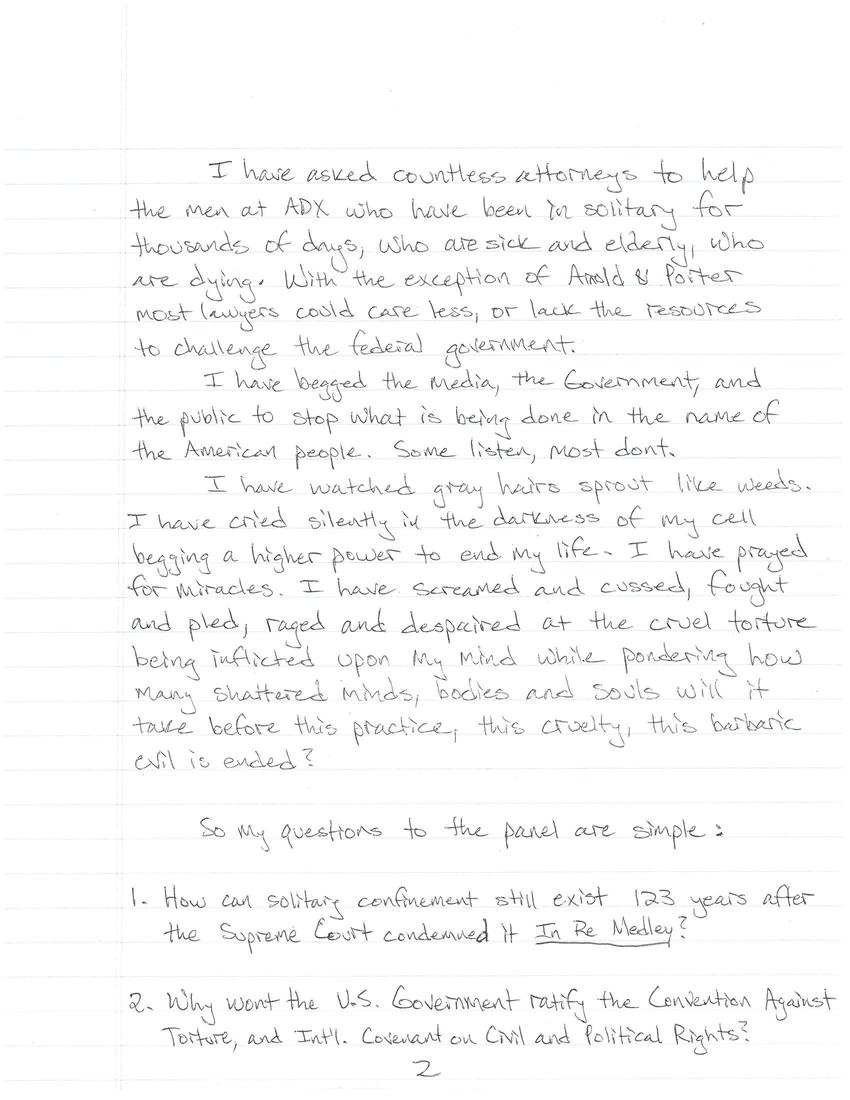 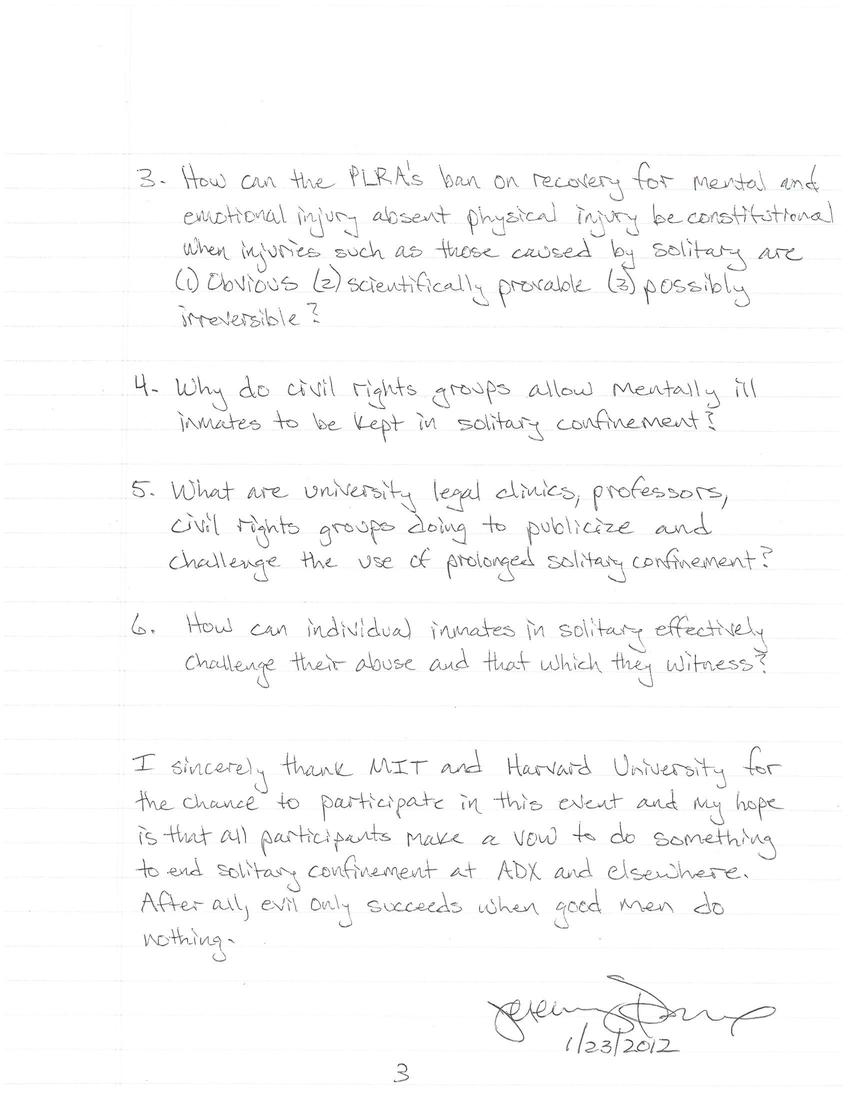 My name is Jeremy Pinson. As of this moment I have spent 943 days and nights in solitary confinement at ADX Florence, the federal government's supermaximum facility in Florence, CO.

For 943 days I have not felt the touch of another human being except the prison guards who only touch me with chains securing my limbs and a baton firmly in their grip to strike me of I displease them.

For 943 days I have eaten meals alone.

For 943 days I have watched men's minds break down in a painfully slow process. First they become eccentric. Then they become antisocial and belligerent. Next comes anger and they lash out at their captors only to be pepper sprayed and beaten into submission. Next comes despair as they realize that they are utterly helpless. For many the next step involves a noose, a bottle of pills, or a razor blade. For a few their misery ends in death.

For 943 days I have wanted to and even tried to die.

I have asked the courts for help but the Prison Litigation Reform Act makes them hostile and totally unwilling to intervene regardless of the merits.

I have asked countless attorneys to help the men at ADX who have been in solitary for thousands of days, who are sick and elderly, who are dying. With the exception of Arnold & Porter most lawyers could care less, or lack the resources to challenge the federal government.

I have begged the media, the Government and the public to stop what is being done in the name of the American people. Some listen, most don't.

I have watched gray hairs sprout like weeds. I have cried silently in the darkness of my cell begging a higher power to end my life. I have prayed for miracles. I have screamed and cussed, fought and pled, raged and despaired at the cruel torture being inflicted upon my mind while pondering how many shattered minds, bodies and souls will it take before this practice, this cruelty, this barbaric evil is ended?

So my questions to the panela re simple:

1) How can solitary confinement still exist 123 years after the Supreme Court condemned it in In Re Medley?[underlined]
2) Why won't the U.S. Governemtn ratify the Convention Against Torture and Int'l Covenant on Civil and Politcal Rights?
3) How can the PLRA's ban on recovery for mental and emotional injury absent physical injury be constitutional when injuries such as those caused by solitary are (1)obvious, (2)scientifically provable, (3)possibly irreversible?
4) Why do civil rights groups allow mentally ill inmates to be kept in solitary confinement?
5) What are university legal clinics, professors, civil rights groups doing to publicize and challenge the use of prolonged solitary confinement?
6) How can individual inmates in solitary effectively challenge their abuse and that which they witness?

I sincerely thank MIT and Harvard University for the chance to participate in this event and my hope is that all participants make a vow to do something to end solitary confinement at ADX and elsewhere. After all, evil only succeeds when good men do nothing.