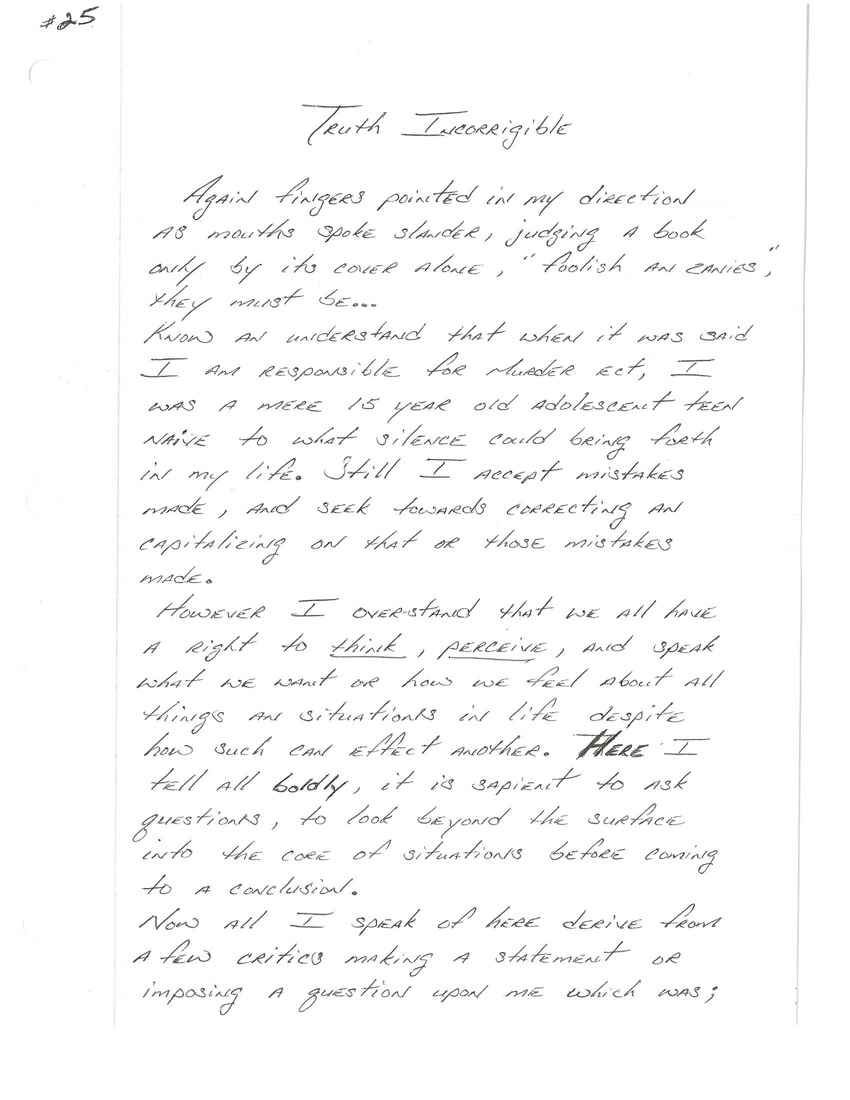 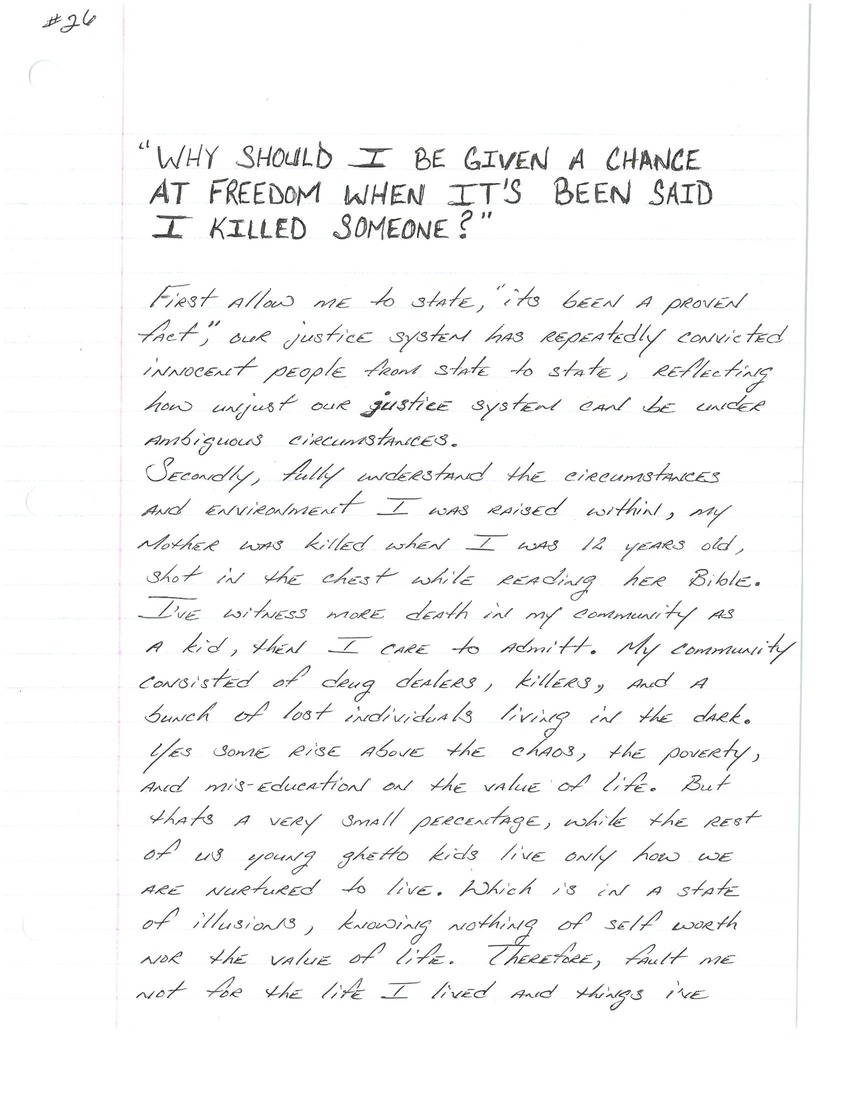 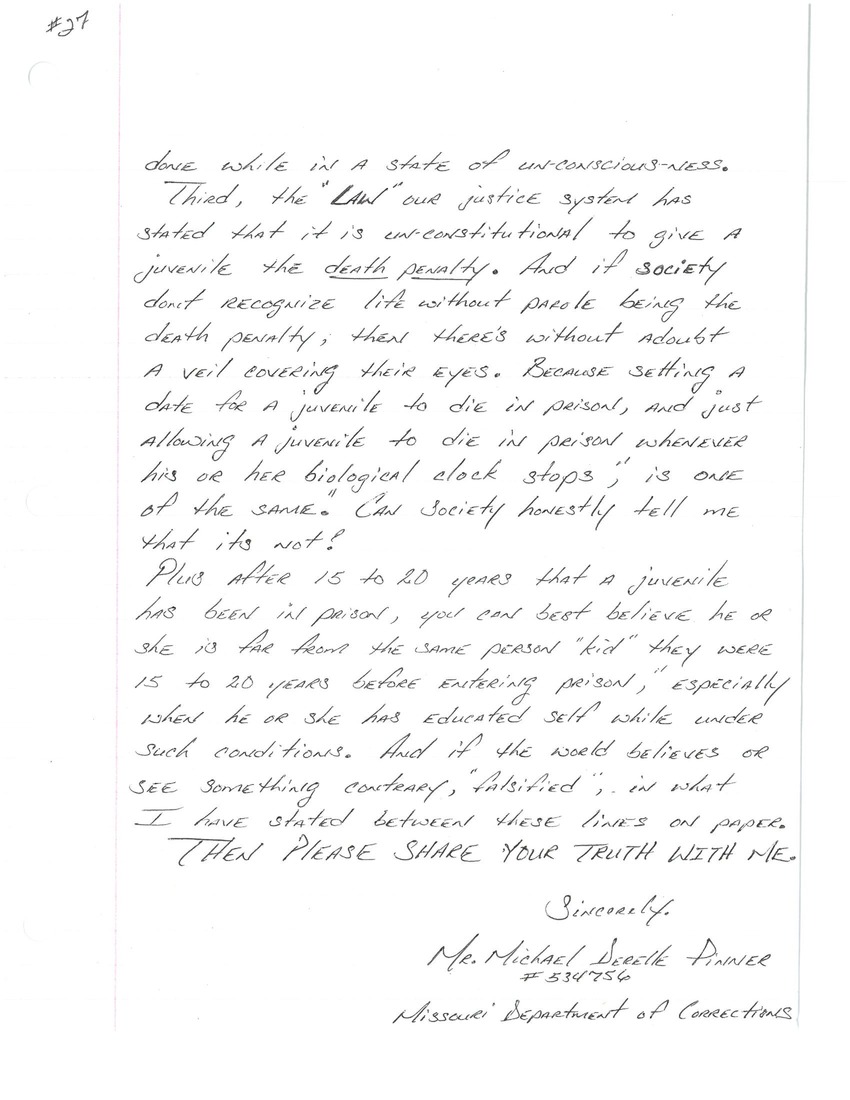 Again, fingers pointed in my direction as mouths speak slander, judging a book by its cover alone. Foolish and zanies, they must be.

Know and understand that when it was said I am responsible for murder, etc., I was a mere 15-year-old teen, naive to what silence could ring forth in my life. Still, I accept mistakes were made and seek to correct and capitalize on that—or those mistakes made.

However, I overstand that we all have a right to think, perceive, and speak what we want or how we feel about all things and situations in my life, despite how such can affect another. Here I tell all, boldly. It is sapient to ask questions, to look beyond the surface into the core of situations, before coming to a conclusion.

Now all I speak of here derives from a few critics making a statement or imposing a question on me which was why should I be given a chance at freedom when it's been said I killed someone.

Secondly, fully understand the circumstances and environment that I was raised in. My mother was killed when I was 12 years old, shot in the chest while reading her Bible. I've witnessed more death in my community as a kid than I care to admit. My community consisted of drug dealers, killers, and a bunch of loot individuals living in the dark. Yes, some rise above the chaos, the poverty, and miseducation on the value of life. But that's a very small percentage. The rest of us young ghetto kids live only how we are nurtured to live, which is in a state of illusions, knowing nothing of self-worth nor the value of life. Therefore, fault me not for the life I lived and things I've done while in a state of unconsciousness.

Third, the "law" our justice system has stated that it is unconstitutional to give a juvenile the death penalty. And if society doesn't recognize life without parole as the death penalty, then there's without a doubt a veil covering their eyes. Because setting a date for a juvenile to die in prison whenever his or her biological clock stops is one of the same. Can society honestly tell me that it's not?

Plus, after 15 to 20 years of a juvenile being in prison, you can best believe he or she is far from the same person ("kid") they were 15 to 20 years before entering prison. Especially when he or she has educated themselves while under such conditions. And if the world believes or sees something contrary, "falsified", in what I have stated between these lines on paper, then PLEASE SHARE YOUR TRUTH WITH ME.