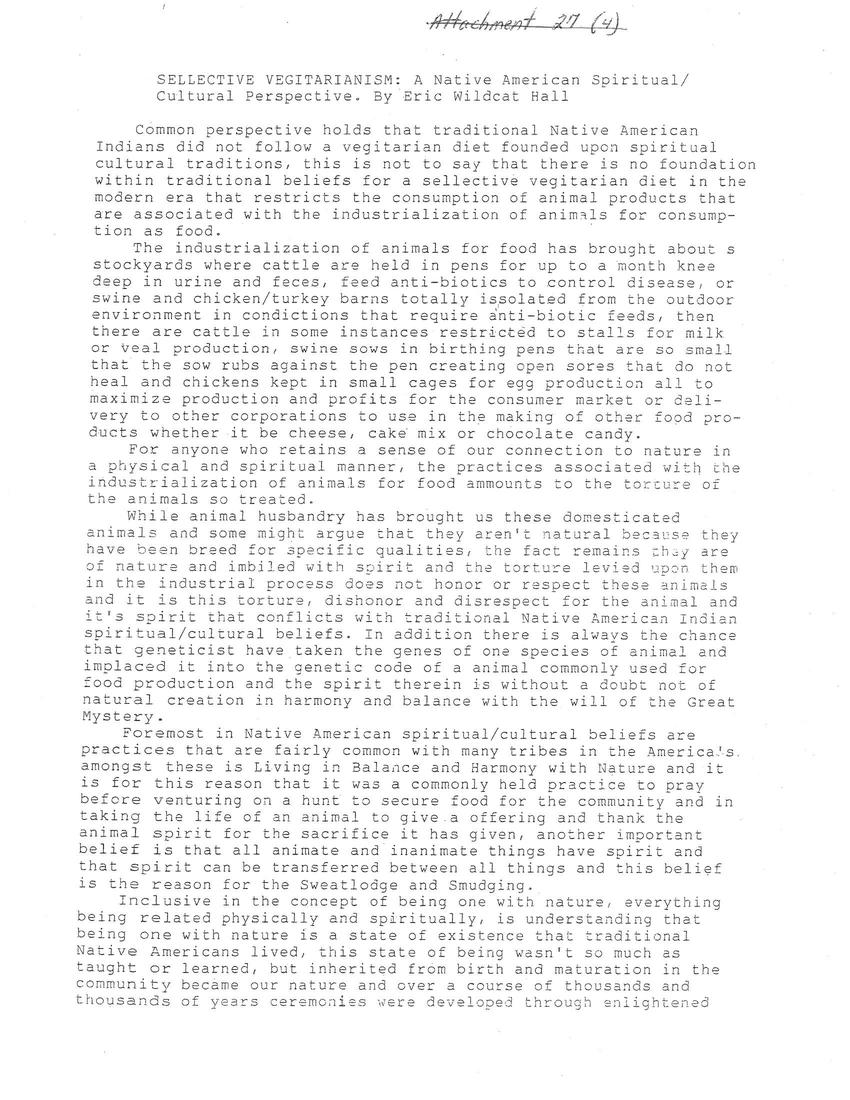 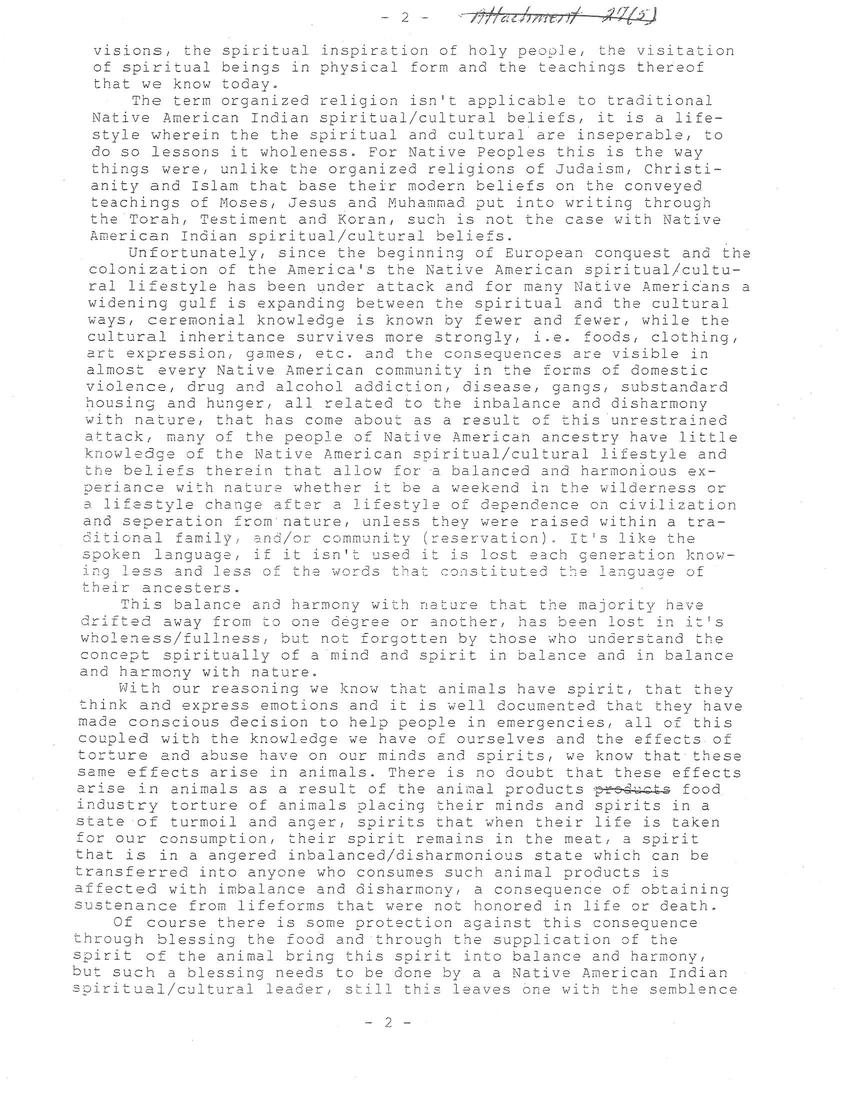 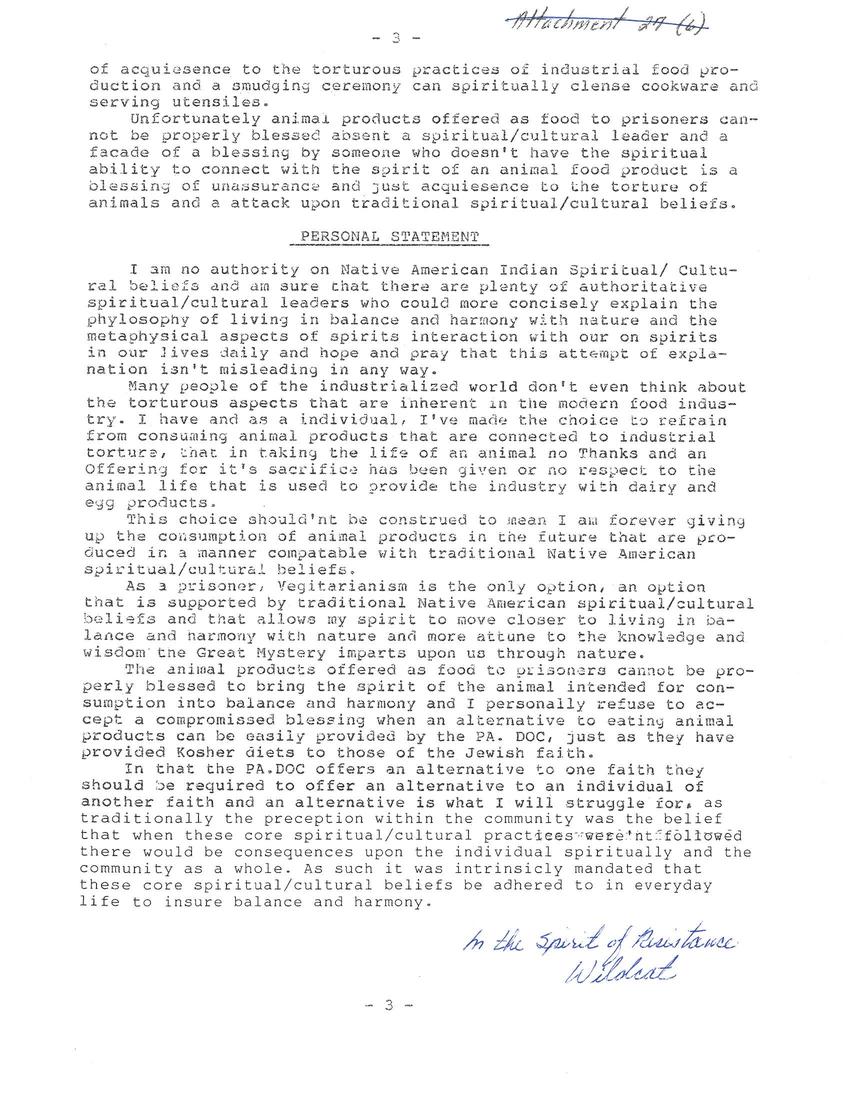 Common perspective holds that traditional Native American Indians did not follow a vegetarian diet founded upon spiritual cultural traditions, this is not to say that there is no foundation within traditional beliefs for a selective vegetarian diet in the modern era that restricts the consumption of animal products that are associated with the industrialization of animals for consumption as food.

The industrialization of animals for food has brought about stockyards where cattle are held in pens for up to a month knee deep in urine and feces, fed antibiotics to control disease, or swine and chicken/turkey barns totally isolated from the outdoor environment in conditions that require antibiotic feeds, then there are cattle in some instances restricted to stalls for milk or veal production, swine sows in birthing pens that are so small that the sow rubs against the pen creating open sores that do not heal and chickens kept in small cages for egg production all to maximize production and profits for the consumer market or delivery to other corporations to use in the making of other food products whether it be cheese, cake mix or chocolate candy.

For anyone who retains a sense of our connection to nature in a physical and spiritual manner, the practices associated with the industrialization of animals for food amounts to the torture of the animals so treated.

While animal husbandry has brought us these domesticated animals and some might argue that they aren't natural because they have been bred for specific qualities, the fact remains they are of nature and imbued with spirit and the torture levied upon them in the industrial process does not honor or respect these animals and it is this torture, dishonor and disrespect for the animal and its spirit that conflicts with traditional Native American Indian spiritual/cultural beliefs. In addition there is always the chance that geneticists have taken the genes of one species of animal commonly used for food production and the spirit therein is without a doubt not of natural creation in harmony and balance with the will of the Great Mystery.

Foremost in Native American spiritual/cultural beliefs are practices that are fairly common with many tribes in the Americas. Amongst these is Living in Balance and Harmony with Nature and it is for this reason that it was a commonly held practice to pray before venturing on a hunt to secure food for the community and in taking the life of an animal to give an offering and thank the animal spirit for the sacrifice it has given, another important belief is that all animate and inanimate things have spirit and that spirit can be transferred between all things and this belief is the reason for the Sweatlodge and Smudging.

Inclusive in the concept of being one with nature, everything being related physically and spiritually, is understanding that being one with nature is a state of existence that traditional Native Americans lived, this state of being wasn't so much as taught or learned, but inherited from birth and maturation in the community became our nature and over a course of thousands and thousands of years ceremonies were developed through enlightened visions, the spiritual inspiration of holy people, the visitation of spiritual beings in physical form and the teachings thereof that we know today.

The term organized religion isn't applicable to traditional Native American Indian spiritual/cultural beliefs, it is a lifestyle wherein the spiritual and cultural are inseparable, to do so lessens its wholeness. For Native Peoples this is the way things were, unlike the organized religions of Judaism, Christianity and Islam that base their modern beliefs on the conveyed teachings of Moses, Jesus and Muhammad put into writing through the Torah, Testament and Koran, such is not the case with Native American Indian spiritual/cultural beliefs.

Unfortunately, since the beginning of European conquest and the colonization of the Americas the Native American spiritual/cultural lifestyle has been under attack and for many Native Americans a widening gulf is expanding between the spiritual and the cultural ways, ceremonial knowledge is known by fewer and fewer, while the cultural inheritance survives more strongly, i.e. foods, clothing, art expression, games, etc. and the consequences are visible in almost every Native American community in the forms of domestic violence, drug and alcohol addiction, disease, gangs, substandard housing and hunger, all related to the imbalance and disharmony with nature, that has come about as a result of this unrestrained attack, many of the people of Native American ancestry have little knowledge of the Native American spiritual/cultural lifestyle and the beliefs therein that allow for a balanced and harmonious experience with nature whether it be a weekend in the wilderness or a lifestyle change after a lifestyle of dependence on civilization and separation from nature, unless they were raised within a traditional family, and/or community (reservation). It's like the spoken language, if it isn't used it is lost, each generation knowing less and less of the words that constituted the language of their ancestors.

With our reasoning we know that animals have spirit, that they think and express emotions and it is well documented that they have made conscious decisions to help people in emergencies, all of this coupled with the knowledge we have of ourselves and the effects of torture and abuse have on our minds and spirits, we know that these same effects arise in animals. There is no doubt that these effects arise in animals as a result of the animal products food industry torture of animals placing their minds and spirits in a state of turmoil and anger, spirits that when their life is taken for our consumption, their spirit remains in the meat, a spirit that is in an angered imbalanced/disharmonious state which can be transferred into anyone who consumes such animal products is affected with imbalance and disharmony, a consequence of obtaining sustenance from lifeforms that were not honored in life or death.

Of course there is some protection against this consequence through blessing the food and through the supplication of the spirit of the animal bring this spirit into balance and harmony, but such a blessing needs to be done by a Native American Indian spiritual/cultural leader, still this leaves one with the semblance of acquiescence to the torturous practices of industrial food production and a smudging ceremony can spiritually cleanse cookware and serving utensils.

Unfortunately animal products offered as food to prisoners cannot be properly blessed absent a spiritual/cultural leader and a facade of a blessing by someone who doesn't have the spiritual ability to connect with the spirit of an animal food product is a blessing of unassurance and just acquiescence to the torture of animals and an attack upon traditional spiritual/cultural beliefs.

I am no authority on Native American Indian spiritual/cultural beliefs and am sure that there are plenty of authoritative spiritual/cultural leaders who could more concisely explain the philosophy of living in balance and harmony with nature and the metaphysical aspects of spirits' interaction with our own spirits in our lives daily and hope and pray that this attempt of explanation isn't misleading in any way.

Many people of the industrialized world don't even think about the torturous aspects that are inherent in the modern food industry. I have and as an individual, I've made the choice to refrain from consuming animal products that are connected to industrial torture, that in taking the life of an animal no thanks and an offering for its sacrifice has been given or no respect to the animal life that is used to provide the industry with dairy and egg products.

This choice shouldn't be construed to mean I am forever giving up the consumption of animal products in the future that are produced in a manner compatible with traditional Native American spiritual/cultural beliefs.

As a prisoner, vegetarianism is the only option, an option that is supported by traditional Native American spiritual/cultural beliefs and that allows my spirit to move closer to living in balance and harmony with nature and more attuned to the knowledge and wisdom the Great Mystery imparts upon us through nature.

The animal products offered as food to prisoners cannot be properly blessed to bring the spirit of the animal intended for consumption into balance and harmony and I personally refuse to accept a compromised blessing when an alternative to eating animal products can be easily provided by the PA.DOC, just as they have provided Kosher diets to those of the Jewish faith.

In that the PA.DOC offers an alternative to one faith they should be required to offer an alternative to an individual of another faith and an alternative is what I will struggle for, as traditionally the perception within the community was the belief that when these core spiritual/cultural practices weren't followed there would be consequences upon the individual spiritually and the community as a whole. As such it was intrinsically mandated that these core spiritual/cultural beliefs be adhered to in everyday life to ensure balance and harmony.

In the spirit of resistance
Wildcat