Reply ✍ Transcribed
From Thoughts From Behind The Wall by Marcus Harris (author's profile)
Share this:
uploaded March 24, 2013.  Original (PDF) 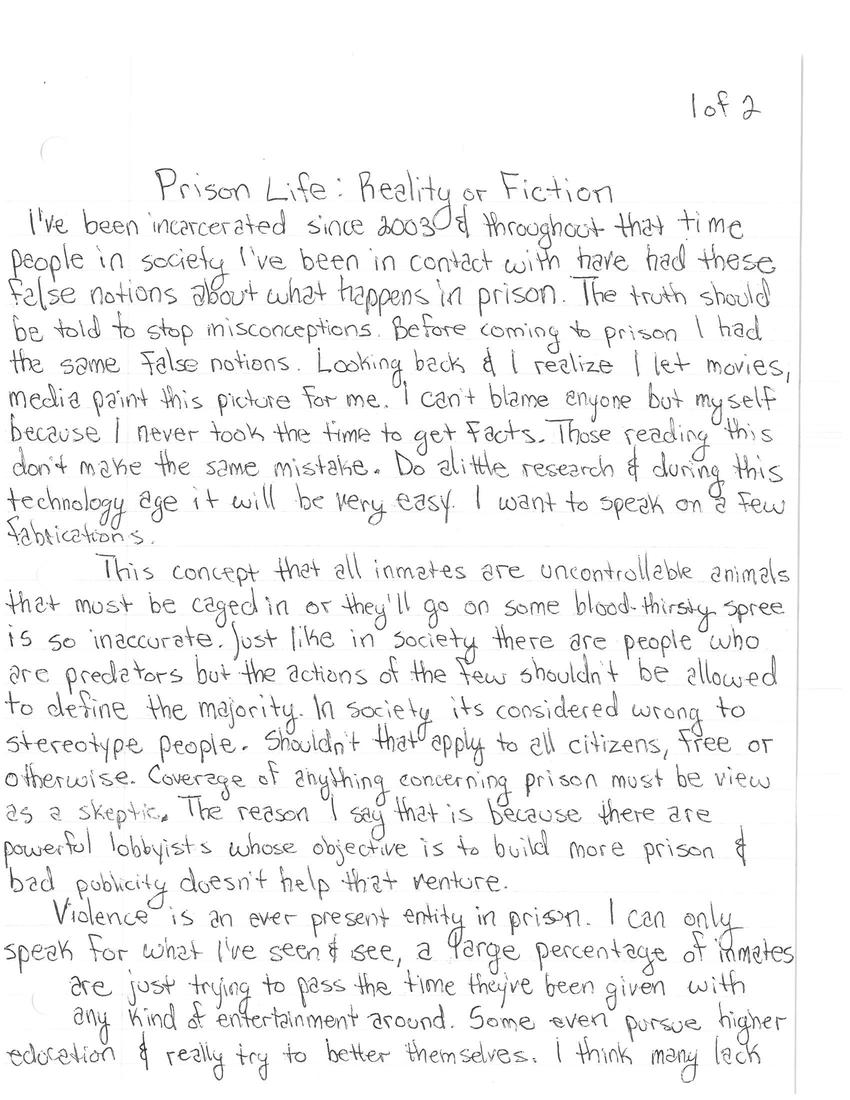 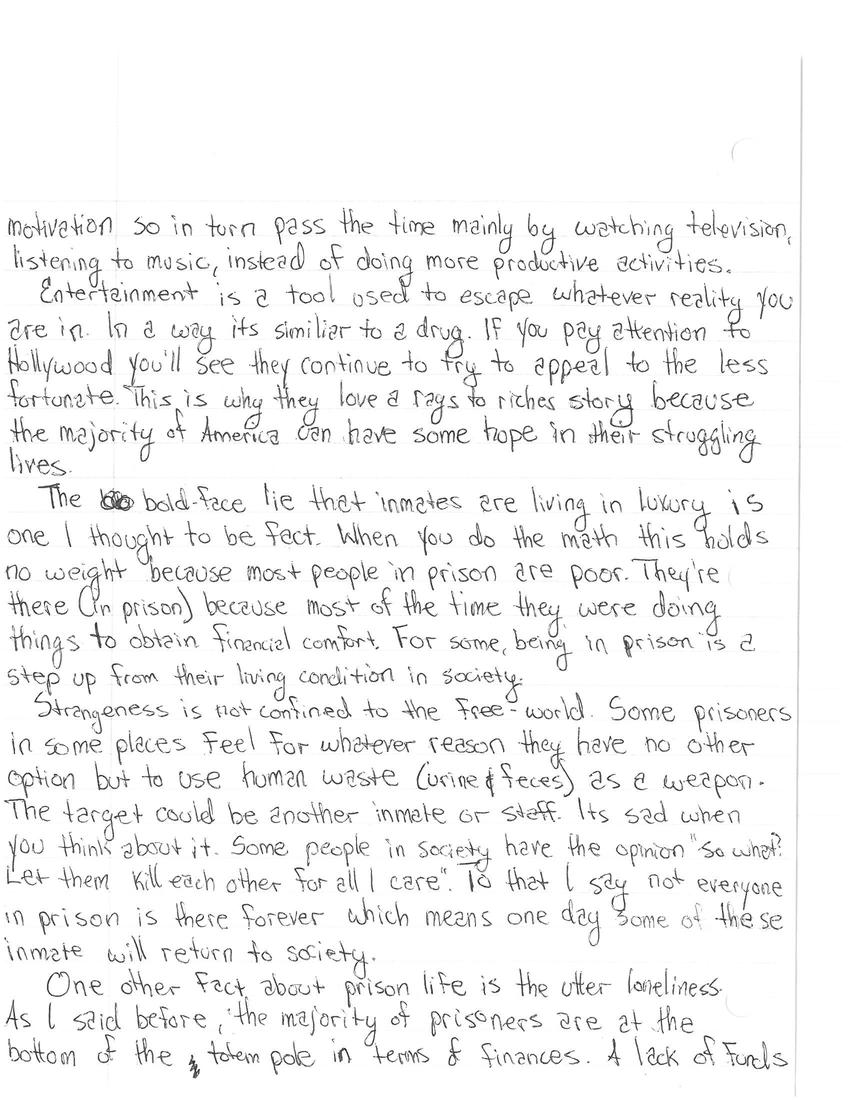 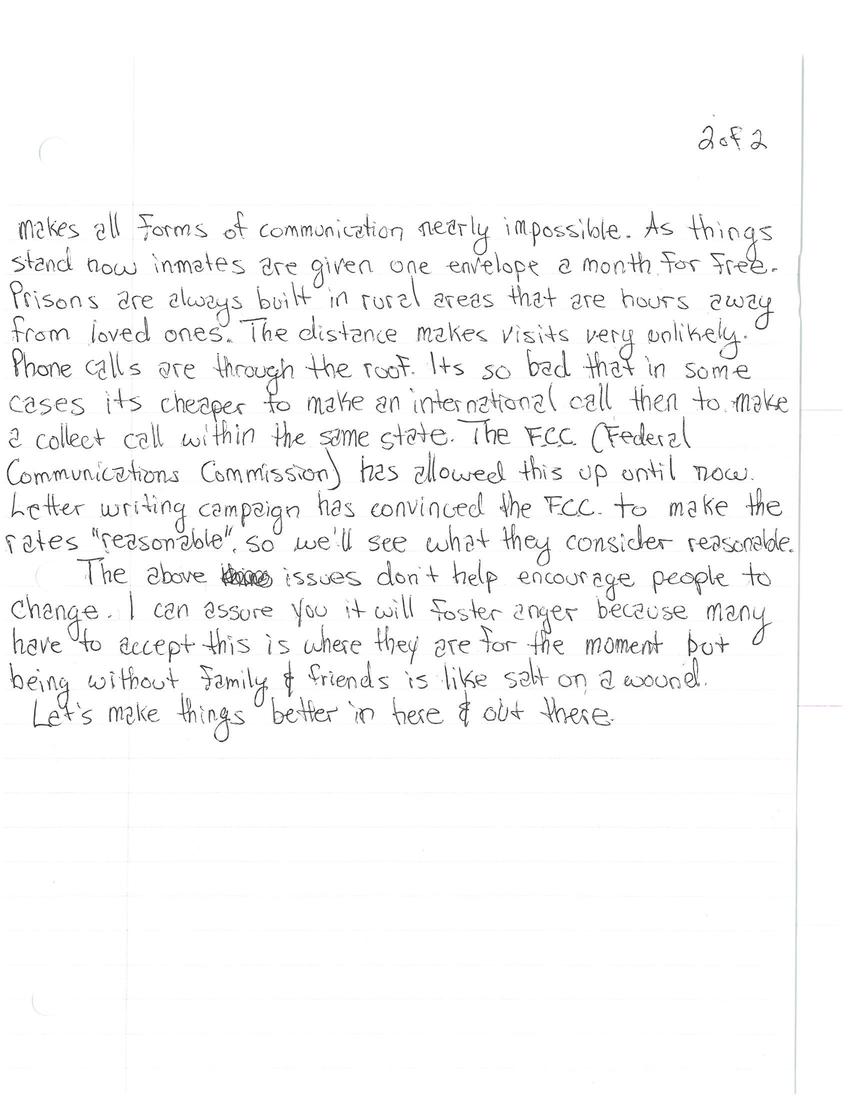 1 or 2
Prison Life: Reality or Fiction
I've been incarcerated since 2003 & throughout that time people in society I've been in contact with have have these false notions about what happens in prison. The truth should be told to stop misconceptions. Before coming to prison I had the same false notions. Looking back & I realize I let movies, media paint this picture for me. I can't blame anyone but myself because I never took the time to get the facts. Those reading this don't make the same mistake. Do a little research & during this technology age it will be very easy. I want to speak on a few fabrications.
This concept that all inmates are uncontrollable animals that must be caged in or they'll go on some blood-thirsty spree is so inaccurate. Just like in society there are people who are predators but the actions of a few shouldn't be allowed to define the majority. In society it's considered wrong to stereotype people. Should that apply to all citizens, free or otherwise. Coverage of anything concerning prisons must be view as a skeptic. The reasons I say that is because there are powerful lobbyists whose objective is to build more prisons & bad publicity doesn't help that venture.
Violence is an ever present entity in prison. I can only speak for what I've seen & see, a large percentage of inmates are just trying to pass the time they've been given with any kind of entertainment around. Some even pursue higher education & really try to better themselves. I think many lack motivation so in turn pass the time mainly by watching television, listening to music, instead of doing more productive activities.
Entertainment is a tool used to escape whatever reality you are in. In a way it's similar to a drug. If you pay attention to Hollywood you'll see they continue to try to appeal to the less fortunate. This is why they love rags to riches stories because the majority of America can have some hope in their struggling lives.
The [?] bold-face life that inmates are living in luxury is one I thought to be fact. When you do the math this holds no weight because most people in prison are poor. They're there (in prison) because most of the time they were doing things to obtain financial comfort. For some, being in prisons is a step up from their living condition in society.
Strangeness is not confined to the free-world. Some prisoners in some places feel that for whatever reasons they have no other option but to use human waste (urine & feces) as a weapon. They target could be another inmate or staff. It's sad when you think about it. Some people in society that the opinion "so what? Let them kill each other for all I care." To that I say not everyone in prison is there forever which means one day some of these inmate will return to society.
One other fact about prison life is the utter loneliness. As I said before, the majority of prisoners are at the bottom of the totem pole in terms of finances. A lack of Funds (2 of 2 )makes all forms of communication nearly impossible. As things stand now inmates are given one envelope a month for free. Prisons are always built in rural areas that are hours away from loved ones. The distance makes visits very unlikely. Phone calls are through the roof. Its so bad that in some cases its cheaper to make and international call that to make a collect call within the same state. The F.C.C. (Federal Communications Commission) has allowed this up until now. Letter writing campaign has convinced the F.C.C. to make the rates "reasonable," so we'll see what they consider reasonable.
The above issues don't help encourage people to change. I can assure you it will foster anger because many have to accept this is where they are for the moment but being without family & friends is like salt on a wound.
Let's make things better in here & out there.

Thanks for writing! I finished the transcription for your post. I am new to transcription, so I was very interested to learn about the reality of life in prison.
I just read your appealing article and I appreciate your calmness when writing this and not letting go your indignation and feelings of revolt you surely must have. I agree fully that inmates should be treated in a human way! I would say keep courage and don't give up the fight for more rights for prisoners. A lot of people think the same way, even if not everybody. I also agree things should be better, not only 'in there' but also 'out there'!