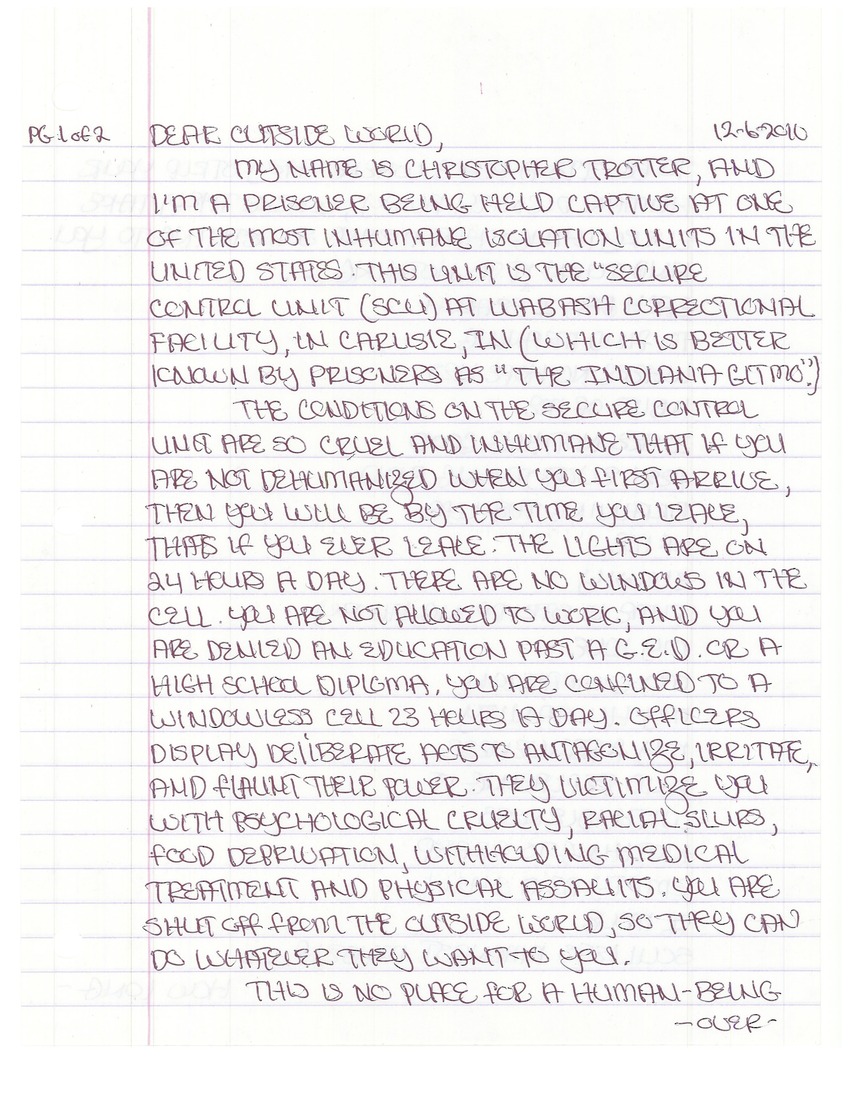 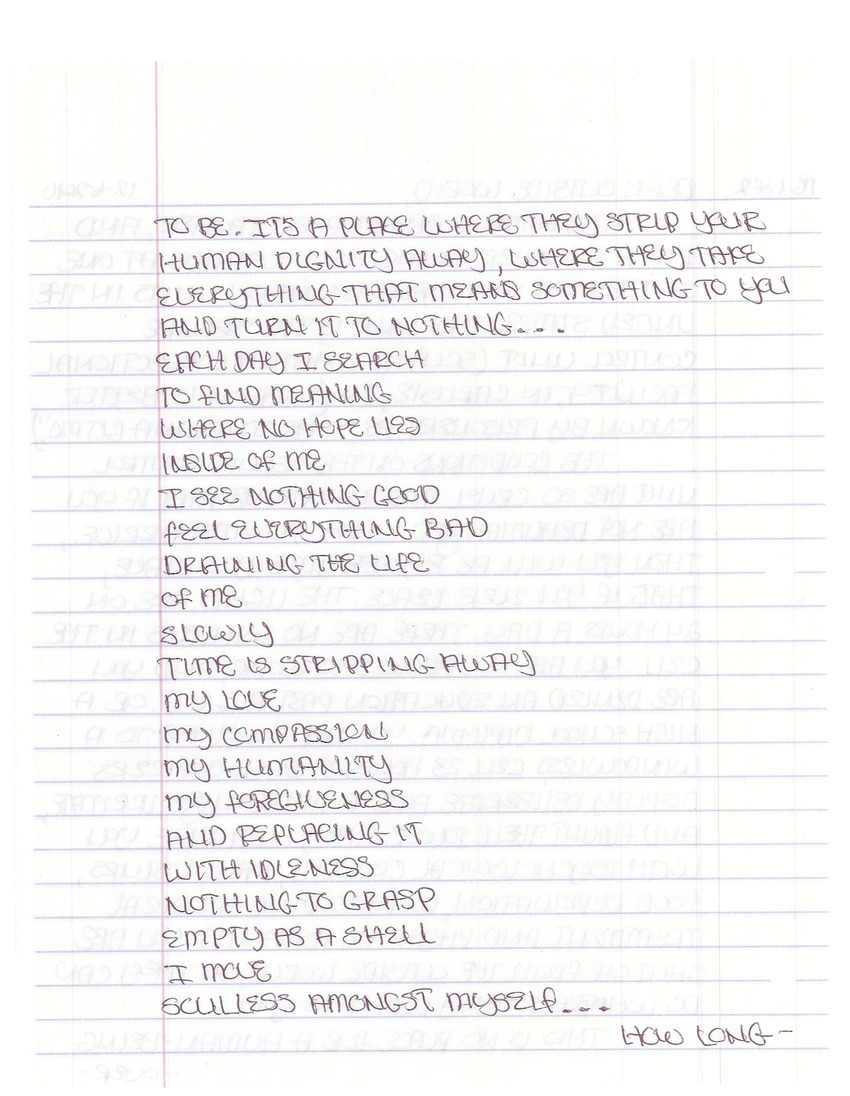 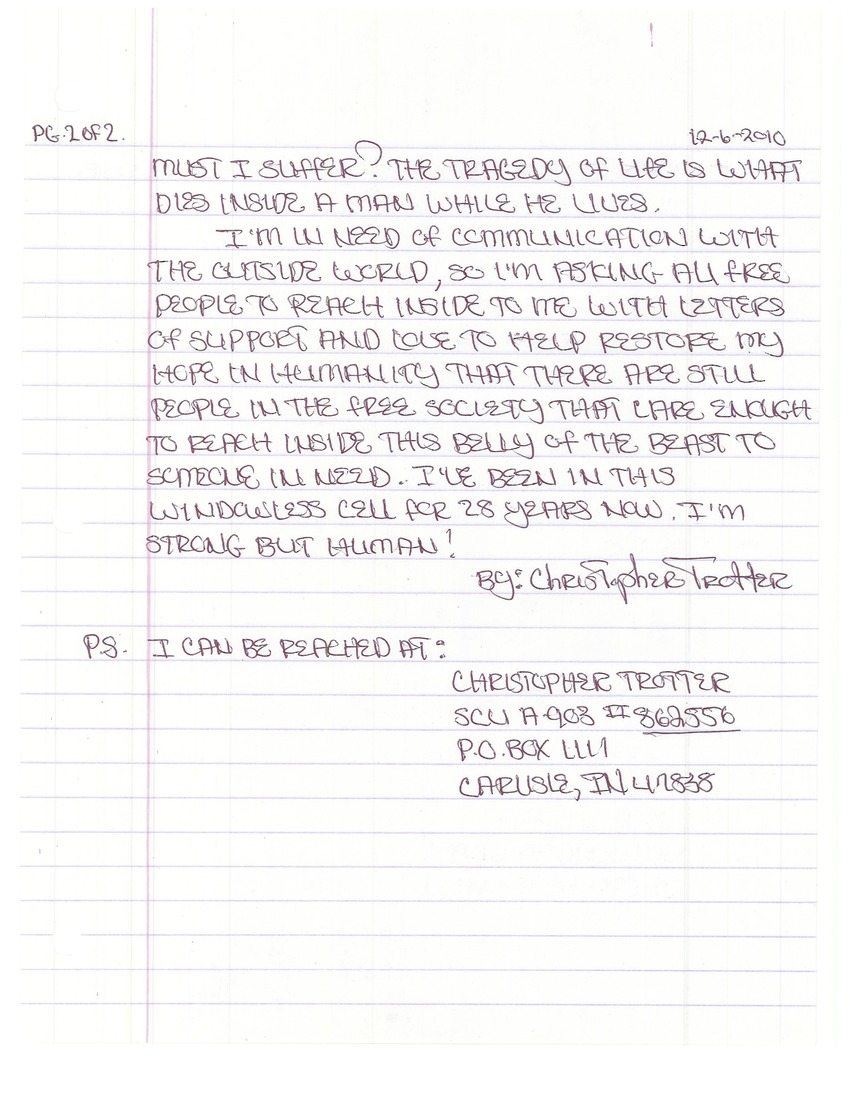 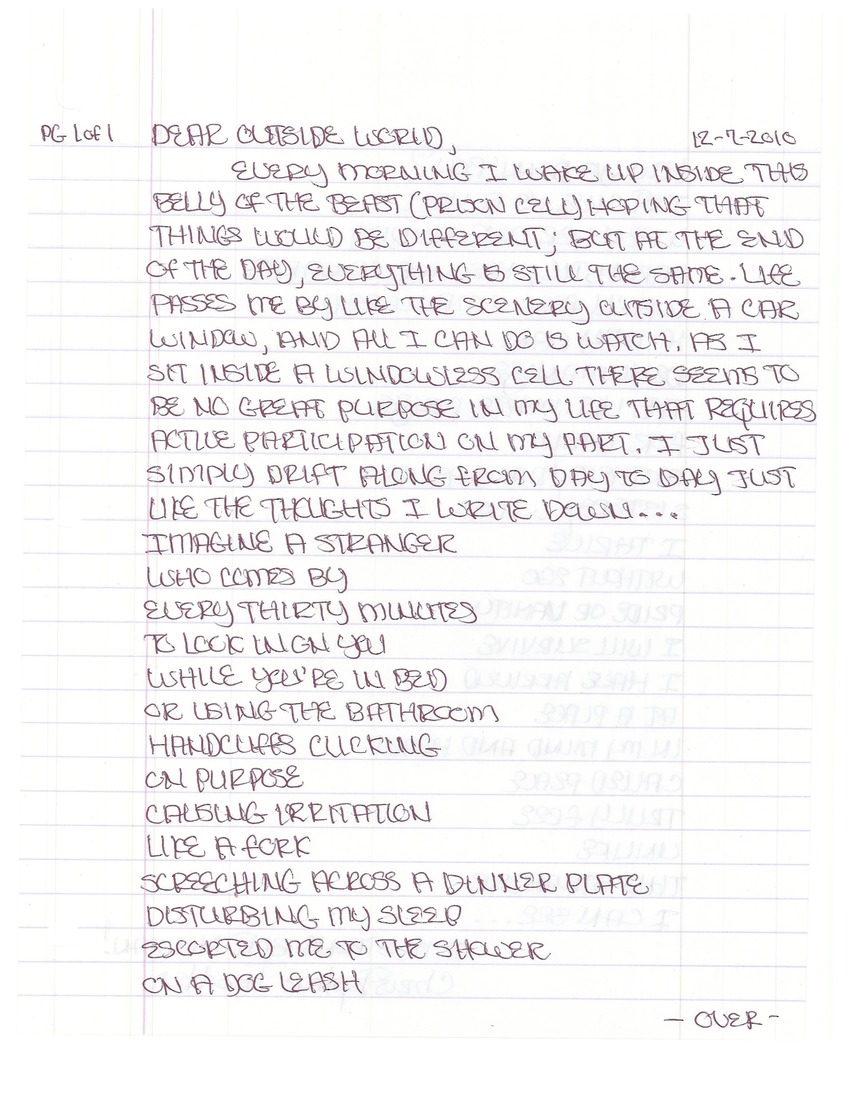 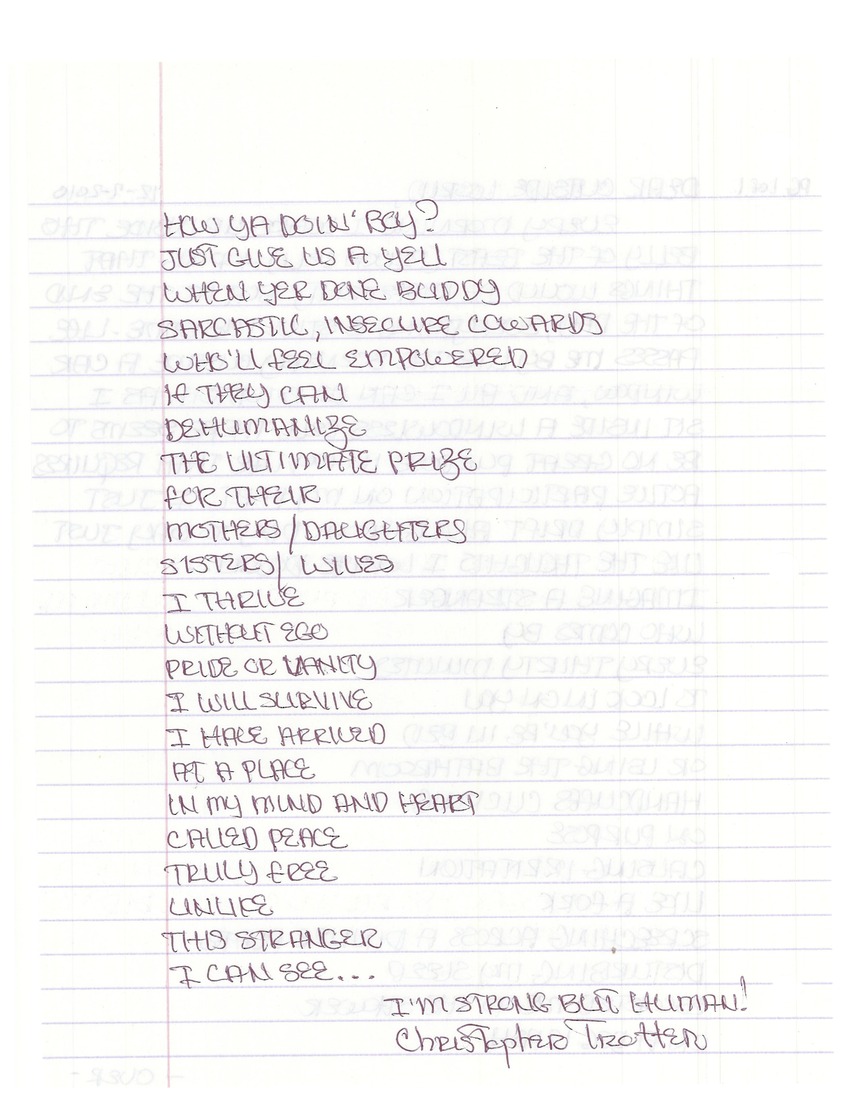 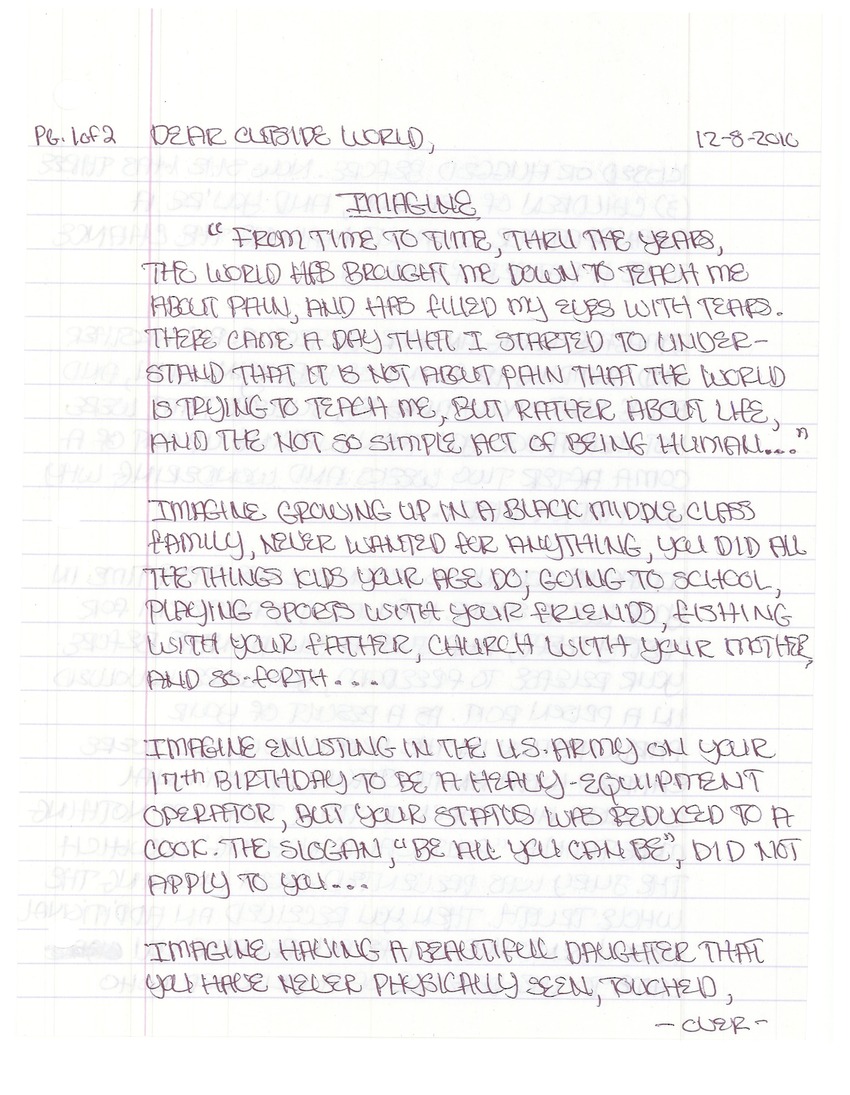 12-6-2010
Dear Outside World,
My name is Christopher Trotter, and I'm a prisoner being held captive at one of the most inhumane isolation units in the United States. This unit is the "secure control unity (SCU) at Wabash Correctional Facility, in Carlisle, in (which is better known by prisoners as "The Indiana Gitmo.")
The conditions on the secure control unit are so cruel and inhumane that if you are not dehumanized when you first arrive, then you will be by the time you leave, that's if you ever leave. The lights are on 24 hours a day. There are no windows in the cell. You are not allowed to work, and you are denied an education past a G.E.D. or a high school diploma. You are confined to a windowless cell 23 hours a day. Officers display deliberate acts to antagonize, irritate, and flaunt their power. They victimize you with psychological cruelty, racial slurs, food deprivation, withholding medical treatment and physical assaults. You are shut off from the outside world, so they can do whatever they want to you.
This is no place for a human-being to be. It's a place where they strip your human dignity away, where they take everything that means something to you and turn it to nothing...
Each day I search
to find meaning
where no hope lies
inside of me
I see nothing good
feel everything bad
drawing the life
of me
slowly
time is stripping away
my love
my compassion
my humanity
my forgiveness
and replacing it
with idleness
nothing to grasp
empty as a shell
I love
soulless amongst myself...
How long must I suffer? The tragedy of life is what dies inside a man while he lives.
I'm in need of communication with the outside world, so I'm asking all free people to reach inside to me with letters of support and love to help restore my hope in humanity that there are still people in the free society that care enough to reach inside this belly of the beast to someone in need. I've been in this windowless cell for 28 years now. I'm strong by human!
By: Christopher Trotter

12-7-2010
Dear outside world,
Every morning I wake up inside this belly of the beast (prison cell) hoping that things would be different; but at the end of the day, everything is still the same. Life passes me by like the scenery outside a car window, and all I can do is watch. As I sit inside a windowless cell there seems to be no great purpose in my life that requires active participation on my part. I just simply drift along from day to day just like the thoughts I write down...
Imagine a stranger
who comes by
every thirty minutes
to look in on you
while you're in ben
or using the bathroom
handcuffs clicking
on purpose
causing irritation
life a fork
screeching across a dinner plate
disturbing my sleep
escorted me to the shower
on a dog leash
How ya doin' boy?
Just give us a yell
when yer done buddy
sarcastic, insecure cowards
who'll feel empowered
if they can
dehumanize
the ultimate prize
for their
mother/daughters
sisters/wives
I thrive
without ego
pride or vanity
I will survive
I have arrived
at a place
in my mind and heart
called peace
truly free
unlike
this stranger
I can see...

Imagine
"From time to time, thru the years,
The world has brought me down to teach me
about pain, and has filled my eyes with tears.
There came a day that I started to under-
stand that it is not about pain that the world
is trying to teach me, but rather about life,
and the not so simple acct of being human.."

Imagine growing up in a black middle class
family, never wanted for anything, you did all
the things kids your age do; going to school,
playing sports with your friends, fishing
with your father, church with your mother,
and so-forth...

Imagine enlisting in the U.S. Army on your
17th birthday to be a heavy-equipment
operator, but your status was reduced to a
cook. The slogan, "Be all you can be," did not
apply to you...

Imagine having a beautiful daughter that
you have never physically seen, touched,
kissed or hugged before. Now she has three
(3) children of her own, and you're a
grandfather without having the chance
to be a father first...

Imagine being an over-protective big brother
and jumping in front of a blazing gun, and
being shot six (6) times by bullets that were
not meant for you. Then waking up out of a
comma after two weeks and working why
you hadn't died...

Imagine coming to prison for the first time in
your life to serve a four (4) year term for
"pretty theft," and just a few months before
your release to freedom, you were involved
in a prison riot. As a result of your
participation in the prison riot, you were
charged with a multitude of criminal
offenses and taken to trial that was nothing
more than a "political lynching" in which
the jury was prevented from knowing the
whole truth. Then you received an additional
prison sentence of life all because you
came to the defense of a prisoner who
could not defend himself against the savage
beating by prison guards...

Imagine both of tour beloved parents being
deceased. Your once strong and proud father
dies of a heart attack, and just six (6) months
later your beautiful god-fearing mother is
killed in a car accident by a drunk-driver.
They were the only family support you had
and part of your soul died with them...

Imagine for the last 27 years being entombed
in a windowless cell; and held under sensory
deprivation, in isolation from human contact,
and the only human touch you feel is the cold
are dehumanizing, demoralizing, and every
day is a struggle just to keep your mental-
liberty and self-respect which are the last
two things they haven't taken away from
you...

How long are you going to imagine that I don't
exist? This is my life! I'm strong but human!
By: Christopher Trotter

Dear Christopher,
Very touched by your story...a man who went to prison for a few years ends up for many times more years. All because you tried to protect a fellow inmate from a brutal beating (says wikapedia). You seem strong, blessed, and very much in control. I see much I admire in you core strength. I do not advocate your violence, but must say it seems obvious that you did it to protect a fellow human being and for that you deserve a metal of honor. As for Gitmo, I hope it closes soon and I hope that all prisons treat their prisoners with diginity and respect.
Merry Christmas and Happy New Year. Stay strong and positive.
All the best,
Tiffany
(scanned reply – view as blog post)
uploaded Jan. 24, 2012.  Original (PDF) 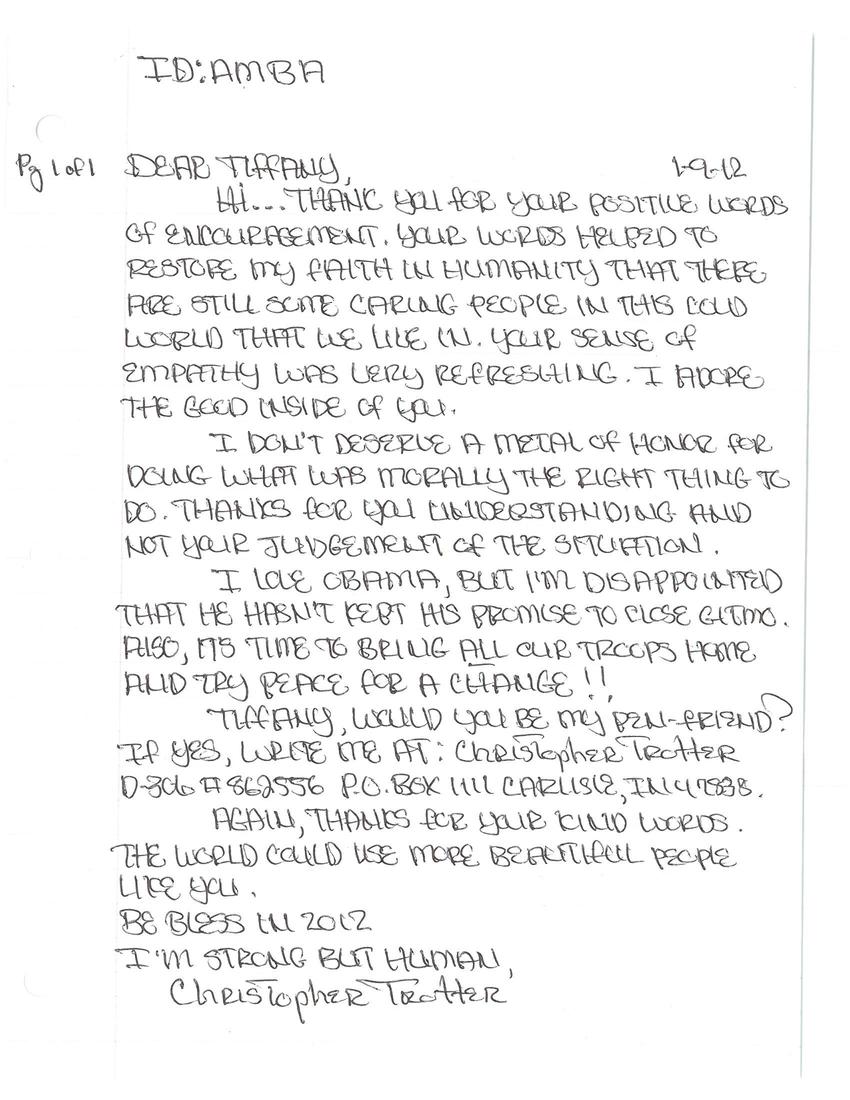