Who Is Really Behind Killings In Libya? 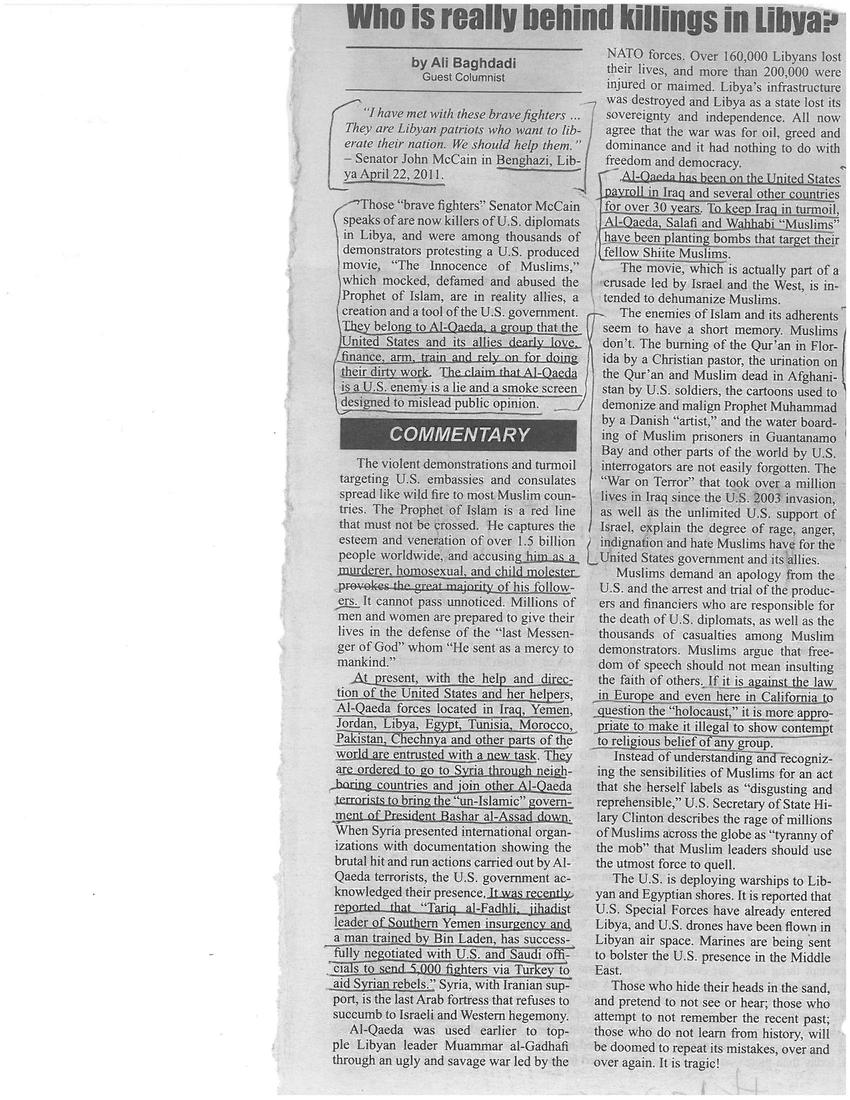 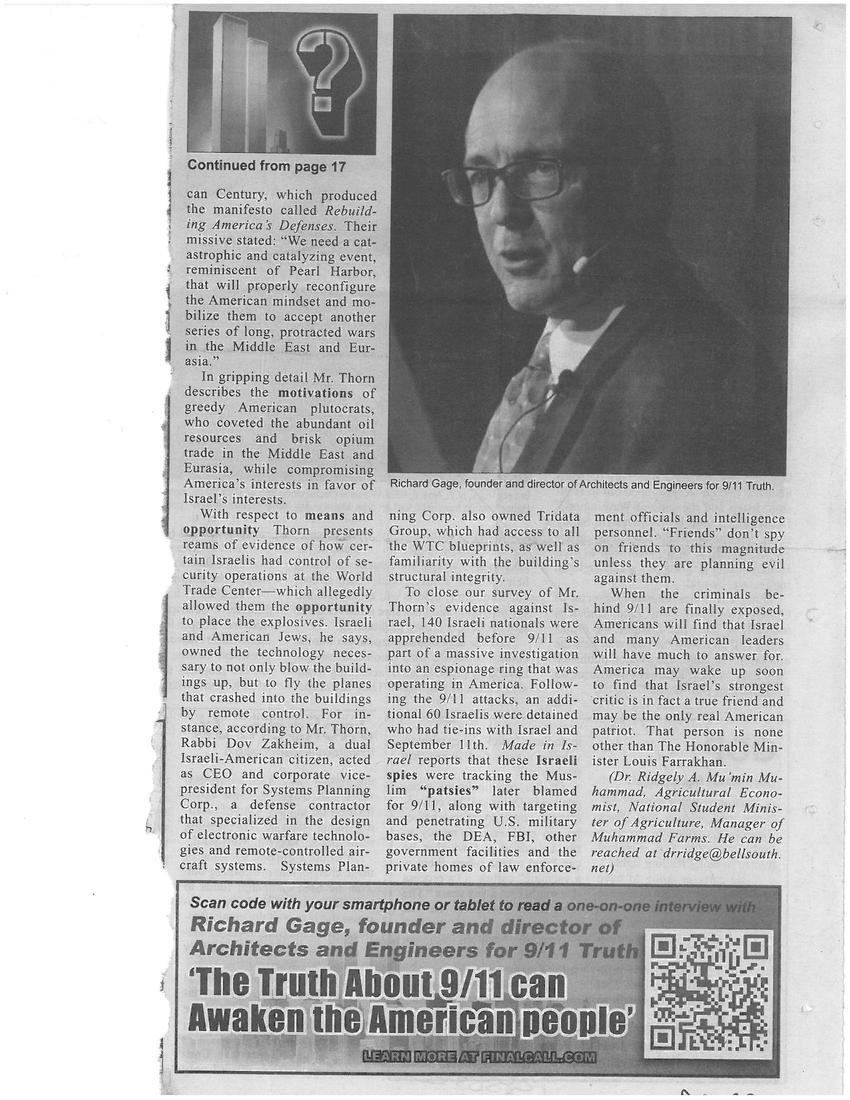 Who is really behind killings in Libya?

"I have met with these brave fighters... They are Libyan patriots who want to liberate their nation. We should help them."
- Senator John McCain in Benghazi, Libya April 22, 2011.

Those "brave fighters" Senator McCain speaks of are now killers of U.S. diplomats in Libya, and were among thousands of demonstrators protesting a U.S. produced movie, "The Innocence of Muslims", which mocked, defamed and abused the Prophet of Islam, are in reality allies, a creation and a tool of the U.S. government. They belong to Al-Qaeda, a group that the United States and its allies dearly love, finance, arm, train and rely on for doing their dirty work. The claim that Al-Qaeda is a U.S. enemy is a lie and a smoke screen designed to mislead public opinion.

The violent demonstrations and turmoil targeting U.S. embassies and consulates spread like wild fire to most Muslim countries. The Prophet of Islam is a red line that must not be crossed. He captures the esteem and veneration of over 1.5 billion people worldwide, and accusing him as a murderer, homosexual, and child molester provokes the great majority of his followers. It cannot pass unnoticed. Millions of men and women are prepared to give their lives in the defense of the "last Messenger of God" whom "He sent as a mercy to mankind."

At present, with the help and direction of the United States and her helpers, Al-Qaeda forces located in Iraq, Yemen, Jordan, Libya, Egypt, Tunisia, Morocco, Pakistan, Chechnya and other parts of the world are entrusted with a new task. They are ordered to go to Syria through neighboring countries and join other Al-Qaeda terrorists to bring the "un-Islamic" government of President Bashar al-Assad down. When Syria presented international organizations with documentation showing the brutal hit and run actions carried out by Al-Qaeda terrorists, the U.S. government acknowledged their presence. It was recently reported that "Tariq al-Fadhli, jihadist leader of Southern Yemen insurgency and a man trained by Bin Laden, has successfully negotiated with U.S. and Saudi officials to send 5,000 fighters via Turkey to aid Syrian rebels." Syria, with Iranian support, is the last Arab fortress that refuses to succumb to Israeli and Western hegemony.

Al-Qaeda was used earlier to topple Libyan leader Muammar al-Gadhafi through an ugly and savage war led by the NATO forces. Over 160,000 Libyans lost their lives, and more than 200,000 were injured or maimed. Libya's infrastructure was destroyed and Libya as a state lost its sovereignty and independence. All now agree that the war was for oil, greed and dominance and it had nothing to do with freedom and democracy.

Al-Qaeda has been on the United States payroll in Iraq and several other countries for over 30 years. To keep Iraq in turmoil, Al-Qaeda, Salafi and Wahhabi "Muslims" have been planting bombs that target their fellow Shiite Muslims.

The movie, which is actually part of a crusade led by Israel and the West, is intended to dehumanize Muslims.

The enemies of Islam and its adherents seem to have a short memory. Muslims don't. The burning of the Qur'an in Florida by a Christian pastor, the urination on the Qur'an and Muslim dead in Afghanistan by U.S. soldiers, the cartoons used to demonize and malign Prophet Muhammad by a Danish "artist", and the water boarding of Muslim prisoners in Guantanamo Bay and other parts of the world by U.S. interrogators are not easily forgotten. The "War on Terror" that took over a million lives in Iraq since the U.S. 2003 invasion, as well as the unlimited U.S. support of Israel, explain the degree of rage, anger, indignation and hate Muslims have for the United States government and its allies.

Muslims demand an apology from the U.S. and the arrest and trial of the producers and financiers who are responsible for the death of U.S. diplomats, as well as the thousands of casualties among Muslim demonstrators. Muslims argue that freedom of speech should not mean insulting the faith of others. If it is against the law in Europe and even here in California to question the "holocaust", it is more appropriate to make it illegal to show contempt to religious belief of any group.

Instead of understanding and recognizing the sensibilities of Muslims for an act that she herself labels as "disgusting and reprehensible", U.S. Secretary of State Hillary Clinton describes the rage of millions of Muslims across the globe as "tyranny of the mob" that Muslim leaders should use the utmost force to quell.

The U.S. is deploying warships to Libyan and Egyptian shores. It is reported that U.S. Special Forces have already entered Libya, and U.S. drones have been flown in Libyan air space. Marines are being sent to bolster the U.S. presence in the Middle East.

Those who hide their heads in the sand, and pretend to not see or hear; those who attempt to not remember the recent past; those who do not learn from history, will be doomed to repeat its mistakes, over and over again. It is tragic!

can Century, which produced the manifesto called Rebuilding America's Defenses. Their missive stated: "We need a catastrophic and catalyzing event, reminiscent of Pearl Harbor, that will properly reconfigure the American mindset and mobilize them to accept another series of long, protracted wars in the Middle East and Eurasia."

In gripping detail Mr. Thorn describes the motivations of greedy American plutocrats, who coveted the abundant oil resources and brisk opium trade in the Middle East and Eurasia, while compromising America's interests in favor of Israel's interests.

With respect to means and opportunity Thorn presents reams of evidence of how certain Israelis had control of security operations at the World Trade Center - which allegedly allowed them the opportunity to place the explosives. Israeli and American Jews, he says, owned the technology necessary to not only blow the buildings up, but to fly the planes that crashed into the buildings by remote control. For instance, according to Mr. Thorn, Rabbi Dov Zakheim, a dual Israeli-American citizen, acted as CEO and corporate vice-president for Systems Planning Corp., a defense contractor that specialized in the design of electronic warfare technologies and remote-controlled aircraft systems. Systems Planning Corp. also owned Tridata Group, which had access to all the WTC blueprints, as well as familiarity with the building's structural integrity.

To close our survey of Mr. Thorn's evidence against Israel, 140 Israeli nationals were apprehended before 9/11 as part of a massive investigation into an espionage ring that was operating in America. Following the 9/11 attacks, an additional 60 Israelis were detained who had tie-ins with Israel and September 11th. Made in Israel reports that these Israeli spies were tracking the Muslim "patsies" later blamed for 9/11, along with targeting and penetrating U.S. military bases, the DEA, FBI, other government facilities and the private homes of law enforcement officials and intelligence personnel. "Friends" don't spy on friends to this magnitude unless they are planning evil against them.

When the criminals behind 9/11 are finally exposed, Americans will find that Israel and many American leaders will have much to answer for. America may wake up soon to find that Israel's strongest critic is in fact a true friend and may be the only real American patriot. That person is none other than The Honorable Minister Louis Farrakhan.

(Dr. Ridgely A. Mu'min Muhammad, Agricultural Economist, National Student Minister of Agriculture, Manager of Muhammad Farms. He can be reached at drridge@bellsouth.net)

Scan code with your smartphone or tablet to read a one-on-one interview with Richard Gage, founder and director of Architects and Engineers for 9/11 Truth

'The Truth About 9/11 can Awaken the American people'