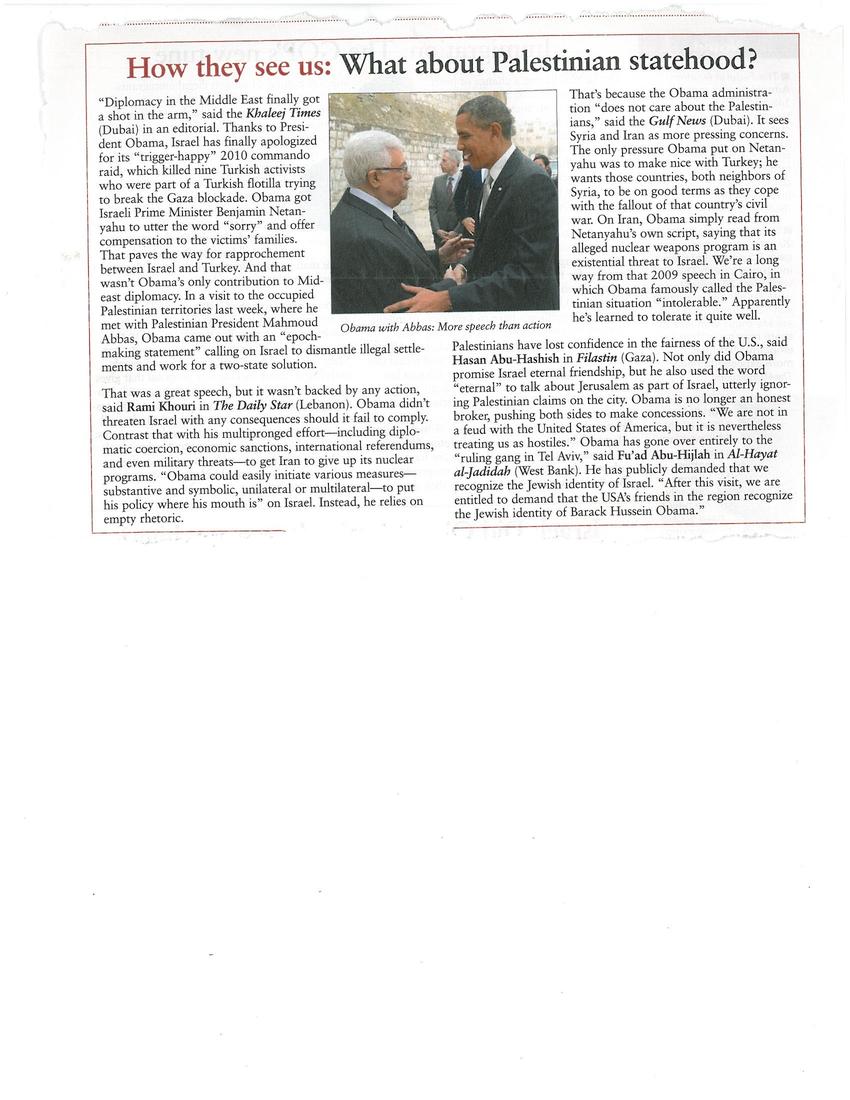 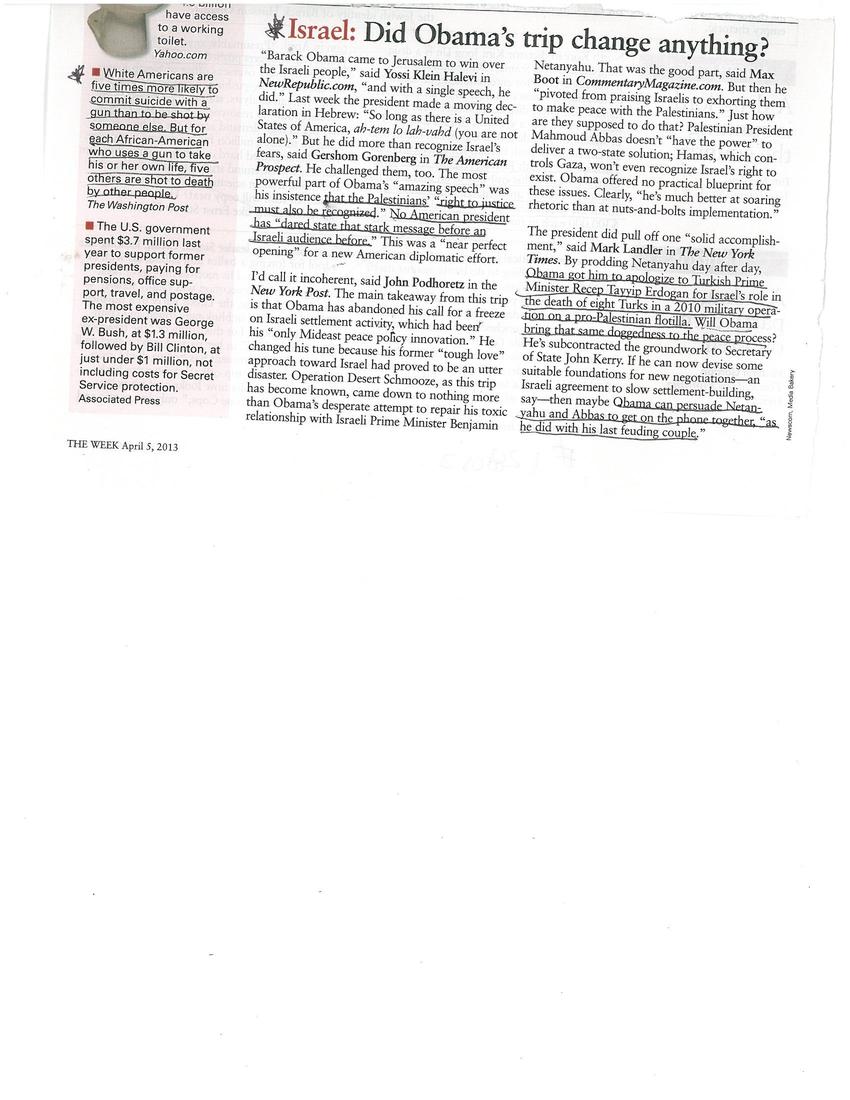 How they see us: What about Palestinian statehood?

"Diplomacy in the Middle East finally got a shot in the arm", said the Khaleej Times (Dubai) in an editorial. Thanks to President Obama, Israel has finally apologized for its "trigger-happy" 2010 commando raid, which killed nine Turkish activists who were part of a Turkish flotilla trying to break the Gaza blockade. Obama got Israeli Prime Minister Benjamin Netanyahu to utter the word "sorry" and offer compensation to the victims' families. That paves the way for rapprochement between Israel and Turkey. And that wasn't Obama's only contribution to Mideast diplomacy. In a visit to the occupied Palestinian territories last week, where he met with Palestinian President Mahmoud Abbas, Obama came out with an "epoch-making statement" calling on Israel to dismantle illegal settlements and work for a two-state solution.

That was a great speech, but it wasn't backed by any action, said Rami Khouri in The Daily Star (Lebanon). Obama didn't threaten Israel with any consequences should it fail to comply. Contrast that with his multipronged effort - including diplomatic coercion, economic sanctions, international referendums, and even military threats - to get Iran to give up its nuclear programs. "Obama could easily initiate various measures - substantive and symbolic, unilateral or multilateral - to put his policy where his mouth is" on Israel. Instead, he relies on empty rhetoric.

That's because the Obama administration "does not care about the Palestinians", said the Gulf News (Dubai). It sees Syria and Iran as more pressing concerns. The only pressure Obama put on Netanyahu was to make nice with Turkey; he wants those countries, both neighbors of Syria, to be on good terms as they cope with the fallout of that country's civil war. On Iran, Obama simply read from Netanyahu's own script, saying that its alleged nuclear weapons program is an existential threat to Israel. We're a long way from that 2009 speech in Cairo, in which Obama famously called the Palestinian situation "intolerable". Apparently he's learned to tolerate it quite well.

Palestinians have lost confidence in the fairness of the U.S., said Hasan Abu-Hashish in Filastin (Gaza). Not only did Obama promise Israel eternal friendship, but he also used the word "eternal" to talk about Jerusalem as part of Israel, utterly ignoring Palestinian claims on the city. Obama is no longer an honest broker, pushing both sides to make concessions. "We are not in a feud with the United States of America, but it is nevertheless treating us as hostiles." Obama has gone over entirely to the "ruling gang in Tel Aviv", said Fu'ad Abu-Hijlah in Al-Hayat al-Jadidah (West Bank). He has publicly demanded that we recognize the Jewish identity of Israel. "After this visit, we are entitled to demand that the USA's friends in the region recognize the Jewish identity of Barack Hussein Obama."

* White Americans are five times more likely to commit suicide with a gun than to be shot by someone else. But for each African-American who uses a gun to take his or her own life, five others are shot to death by other people.
The Washington Post

* The U.S. government spent $3.7 million last year to support former presidents, paying for pensions, office support, travel, and postage. The most expensive ex-president was George W. Bush, at $1.3 million, followed by Bill Clinton, at just under $1 million, not including costs for Secret Service protection.
Associated Press

Israel: Did Obama's trip change anything?

"Barack Obama came to Jerusalem to win over the Israeli people", said Yossi Klein Halevi in NewRepublic.com, "and with a single speech, he did." Last week the president made a moving declaration in Hebrew: "So long as there is a United States of America, ah-tem lo lah-vahd (you are not alone)." But he did more than recognize Israel's fears, said Gershom Gorenberg in The American Prospect. He challenged them, too. The most powerful part of Obama's "amazing speech" was his insistence that the Palestinians' "right to justice must also be recognized." No American president has "dared state that stark message before an Israeli audience before." This was a "near perfect opening" for a new American diplomatic effort.

I'd call it incoherent, said John Podhoretz in the New York Post. The main takeaway from this trip is that Obama has abandoned his call for a freeze on Israeli settlement activity, which had been his "only Mideast peace policy innovation." He changed his tune because his former "tough love" approach toward Israel had proved to be an utter disaster. Operation Desert Schmooze, as this trip has become known, came down to nothing more than Obama's desperate attempt to repair his toxic relationship with Israeli Prime Minister Benjamin Netanyahu. That was the good part, said Max Boot in CommentaryMagazine.com. But then he "pivoted from praising Israelis to exhorting them to make peace with the Palestinians." Just how are they supposed to do that? Palestinian President Mahmoud Abbas doesn't "have the power" to deliver a two-state solution; Hamas, which controls Gaza, won't even recognize Israel's right to exist. Obama offered no practical blueprint for these issues. Clearly, "he's much better at soaring rhetoric than at nuts-and-bolts implementation."

The president did pull off one "solid accomplishment", said Mark Landler in The New York Times. By prodding Netanyahu day after day, Obama got him to apologize to Turkish Prime Minister Recep Tayyip Erdogan for Israel's role in the death of eight Turks in a 2010 military operation on a pro-Palestinian flotilla. Will Obama bring that same doggedness to the peace process? He's subcontracted the groundwork to Secretary of State John Kerry. If he can now devise some suitable foundations for new negotiations - an Israeli agreement to slow settlement-building, say - then maybe Obama can persuade Netanyahu and Abbas to get on the phone together, "as he did with his last feuding couple."