Samira Yamin: We Will Not Fail 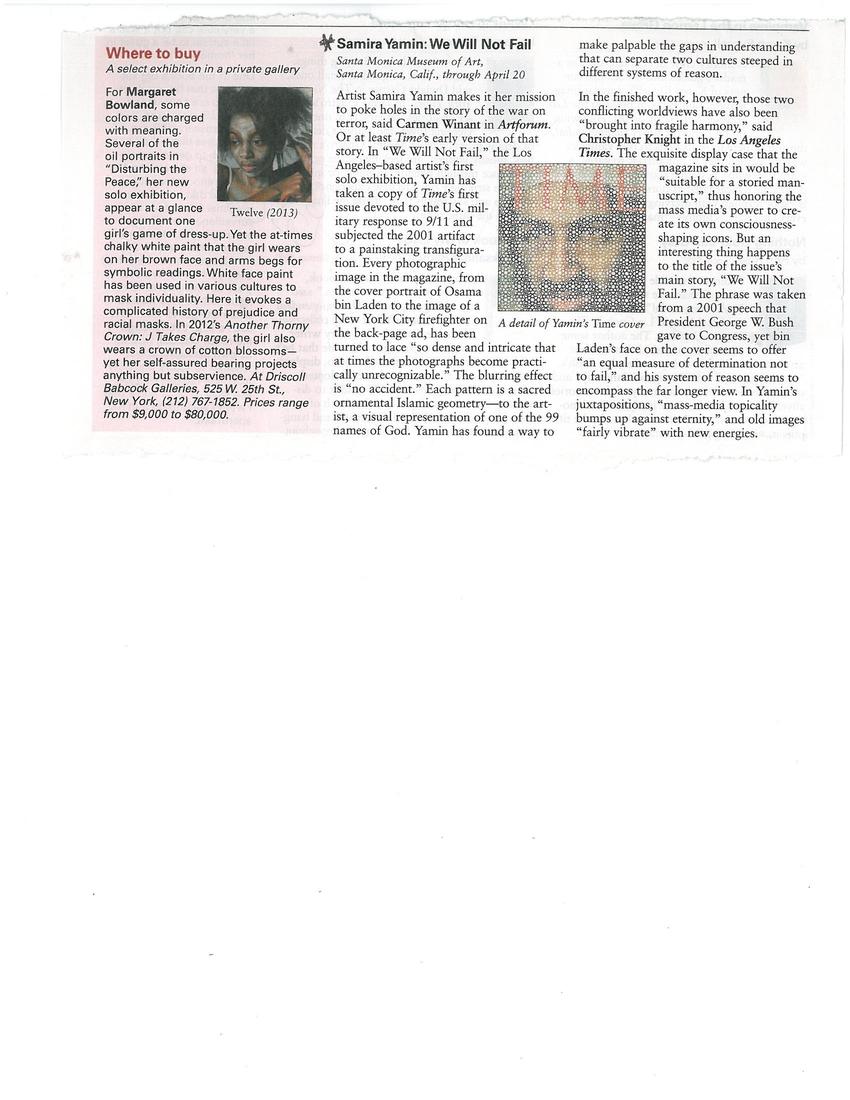 Where to buy
A select exhibition in a private gallery

For Margaret Bowland, some colors are charged with meaning. Several of the oil portraits in "Disturbing the Peace", her new solo exhibition, appear at a glance to document one girl's game of dress-up. Yet the at-times chalky white paint that the girl wears on her brown face and arms begs for symbolic readings. White face paint has been used in various cultures to mask individuality. Here it evokes a complicated history of prejudice and racial masks. In 2012's Another Thorny Crown: J Takes Charge, the girl also wears a crown of cotton blossoms - yet her self-assured bearing projects anything but subservience. At Driscoll Babcock Galleries, 525 W. 25th St., New York, (212) 767-1852. Prices range from $9,000 to $80,000.

Samira Yamin: We Will Not Fail
Santa Monica Museum of Art,
Santa Monica, Calif., through April 20

Artist Samira Yamin makes it her mission to poke holes in the story of the war on terror, said Carmen Winant in Artforum. Or at least Time's early version of that story. In "We Will Not Fail", the Los Angeles-based artist's first solo exhibition, Yamin has taken a copy of Time's first issue devoted to the U.S. military response to 9/11 and subjected the 2001 artifact to a painstaking transfiguration. Every photographic image in the magazine, from the cover portrait of Osama bin Laden to the image of a New York City firefighter on the back-page ad, has been turned to lace "so dense and intricate that at times the photographs become practically unrecognizable." The blurring effect is "no accident". Each pattern is a sacred ornamental Islamic geometry - to the artist, a visual representation of one of the 99 names of God. Yamin has found a way to make palpable the gaps in understanding that can separate two cultures steeped in different systems of reason.

In the finished work, however, those two conflicting worldviews have also been "brought into fragile harmony", said Christopher Knight in the Los Angeles Times. The exquisite display case that the magazine sits in would be "suitable for a storied manuscript", thus honoring the mass media's power to create its own consciousness-shaping icons. But an interesting thing happens to the title of the issue's main story, "We Will Not Fail." The phrase was taken from a 2001 speech that President George W. Bush gave to Congress, yet bin Laden's face on the cover seems to offer "an equal measure of determination not to fail", and his system of reason seems to encompass the far longer view. In Yamin's juxtapositions, "mass-media topicality bumps up against eternity", and old images "fairly vibrate" with new energies.