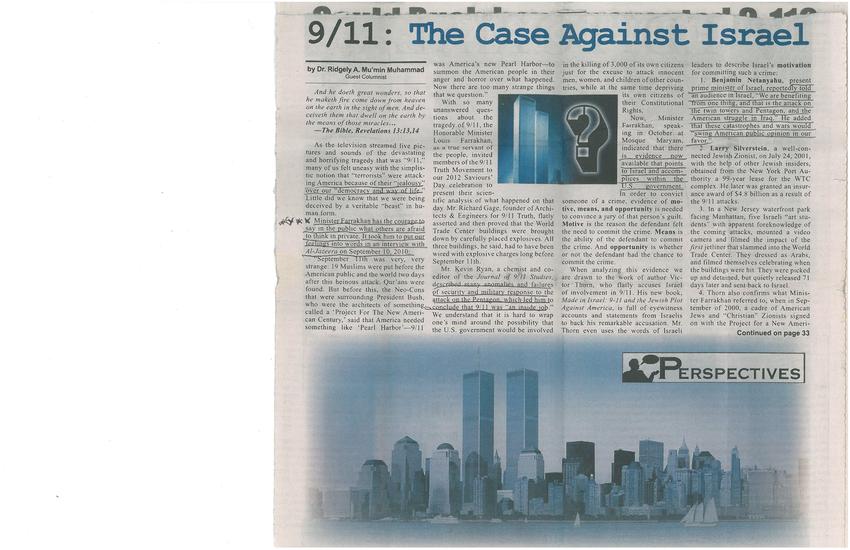 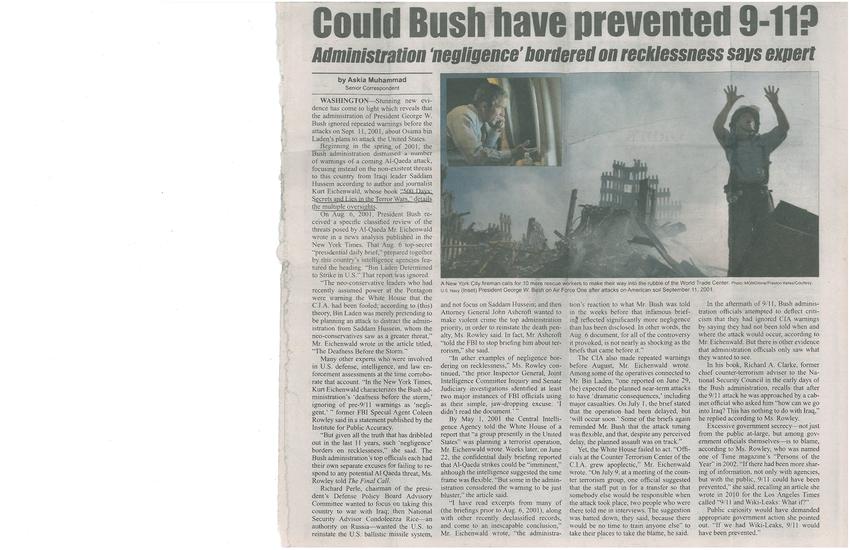 And he doeth great wonders, so that he maketh fire come down from heaven on the earth in the sight of men. And deceiveth them that dwell on the earth by the means of those miracles...
- The Bible, Revelations 13:13,14

As the television streamed live pictures and sounds of the devastating and horrifying tragedy that was "9/11", many of us felt uneasy with the simplistic notion that "terrorists" were attacking America because of their "jealousy" over our "democracy and way of life". Little did we know that we were being deceived by a veritable "beast" in human form.

Minister Farrakhan has the courage to say in the public what others are afraid to think in private. It took him to put our feelings into words in an interview with Al-Jazeera on September 10, 2010.

"September 11th was very, very strange. 19 Muslims were put before the American public and the world two days after this heinous attack. Qur'ans were found. But before this, the Neo-Cons that were surrounding President Bush, who were the architects of something called a 'Project For The New American Century', said that America needed something like 'Pearl Harbor' - 9/11 was America's new Pearl Harbor - to summon the American people in their anger and horror over what happened. Now there are too many strange things that we question."

With so many unanswered questions about the tragedy of 9/11, the Honorable Minister Louis Farrakhan, as a true servant of the people, invited members of the 9/11 Truth Movement to our 2012 Saviours' Day celebration to present their scientific analysis of what happened on that day. Mr. Richard Gage, founder of Architects & Engineers for 9/11 Truth, flatly asserted and then proved that the World Trade Center buildings were brought down by carefully placed explosives. All three buildings, he said, had to have been wired with explosive charges long before September 11th.

Mr. Kevin Ryan, a chemist and co-editor of the Journal of 9/11 Studies described many anomalies and failures of security and military response to the attack on the Pentagon which led him to conclude that 9/11 was "an inside job". We understand that it is hard to wrap one's mind around the possibility that the U.S. government would be involved in the killing of 3,000 of its own citizens just for the excuse to attack innocent men, women, and children of other countries, while at the same time depriving its own citizens of their Constitutional Rights.

When analyzing this evidence we are drawn to the work of author Victor Thorn, who flatly accuses Israel of involvement in 9/11. His new book, Made in Israel: 9-11 and the Jewish Plot Against America, is full of eyewitness accounts and statements from Israelis to back his remarkable accusation. Mr. Thorn even uses the words of Israeli leaders to describe Israel's motivation for committing such a crime.

1. Benjamin Netanyahu, present prime minister of Israel, reportedly told an audience in Israel, "We are benefiting from one thing, and that is the attack on the twin towers and Pentagon, and the American struggle in Iraq." He added that these catastrophes and wars would "swing American public opinion in our favor."

2. Larry Silverstein, a well-connected Jewish Zionist, on July 24, 2001, with the help of other Jewish insiders, obtained from the New York Port Authority a 99-year lease for the WTC complex. He later was granted an insurance award of $4.8 billion as a result of the 9/11 attacks.

3. In a New Jersey waterfront park facing Manhattan, five Israeli "art students" with apparent foreknowledge of the coming attacks, mounted a video camera and filmed the impact of the FIRST jetliner that slammed into the World Trade Center. They dressed as Arabs, and filmed themselves celebrating when the buildings were hit. They were picked up and detained, but quietly released 71 days later and sent back to Israel.

4. Thorn also confirms what Minister Farrakhan referred to, when in September of 2000, a cadre of American Jews and "Christian" Zionists signed on with the Project for a New Ameri-
Continued on page 33

WASHINGTON - Stunning new evidence has come to light which reveals that the administration of George W. Bush ignored repeated warnings before the attacks on Sept. 11, 2001, about Osama bin Laden's plans to attack the United States.

Beginning in the spring of 2001, the Bush administration dismissed a number of warnings of a coming Al-Qaeda attack, focusing instead on the non-existent threats to this country from Iraqi leader Saddam Hussein according to author and journalist Kurt Eichenwald, whose book "500 Days: Secrets and Lies in the Terror Wars", details the multiple oversights.

On Aug, 6, 2001, President Bush received a specific classified review of the threats posed by Al-Qaeda Mr. Eichenwald wrote in a news analysis published in the New York Times. That Aug. 6 top-secret "presidential daily brief", prepared together by this country's intelligence agencies featured the heading: "Bin Laden Determined to Strike in U.S". That report was ignored.

"The neo-conservative leaders who had recently assumed power at the Pentagon were warning the White House that the C.I.A. had been fooled; according to (this) theory, Bin Laden was merely pretending to be planning an attack to distract the administration from Saddam Hussein, whom the neo-conservatives saw as a greater threat", Mr. Eichenwald wrote in the article titled, "The Deafness Before the Storm".

Many other experts who were involved in U.S. defense, intelligence, and law enforcement assessments at the time corroborate that account. "In The New York Times, Kurt Eichenwald characterizes the Bush administration's 'deafness before the storm', ignoring of pre-9/11 warnings as 'negligent'", former FBI Special Agent Coleen Rowley said in a statement published by the Institute for Public Accuracy.

"But given all the truth that has dribbled out in the last 11 years, such 'negligence' borders on recklessness", she said. The Bush administration's top officials each had their own separate excuses for failing to respond to any potential Al-Qaeda threat, Ms. Rowley told The Final Call.

Richard Perle, chairman of the president's Defense Policy Board Advisory Committee wanted to focus on taking this country to war with Iraq; then National Security Advisor Condoleezza Rice - an authority on Russia - wanted the U.S. to reinstate the U.S. ballistic missile system, and not focus on Saddam Hussein; and then Attorney General John Ashcroft wanted to make violent crime the top administration priority, in order to reinstate the death penalty, Ms. Rowley said. In fact, Mr. Ashcroft "told the FBI to stop briefing him about terrorism", she said.

"In other examples of negligence bordering on recklessness", Ms. Rowley continued, "the prior Inspector General, Joint Intelligence Committee Inquiry and Senate Judiciary investigations identified at least two major instances of FBI officials using as their simple, jaw-dropping excuse, 'I didn't read the document.'"

By May 1, 2001 the Central Intelligence Agency told the White House of a report that "a group presently in the United States" was planning a terrorist operation, Mr. Eichenwald wrote. Weeks later, on June 22, the confidential daily briefing reported that Al-Qaeda strikes could be "imminent", although the intelligence suggested the time frame was flexible. "But some in the administration considered the warning to be just bluster", the article said.

"I have read excerpts from many of (the briefings prior to Aug. 6, 2001), along with other recently declassified records, and come to an inescapable conclusion", Mr. Eichenwald wrote, "the administration's reaction to what Mr. Bush was told in the weeks before that infamous briefing reflected significantly more negligence than has been disclosed. In other words, the Aug. 6 document, for all the controversy it provoked, is not nearly as shocking as the briefs that came before it."

The CIA also made repeated warnings before August, Mr. Eichenwald wrote. Among some of the operatives connected to Mr. Bin Laden, "one reported on June 29, (he) expected the planned near-term attacks to have 'dramatic consequences', including major casualties. On July 1, the brief stated that the operation had been delayed, but 'will occur soon'. Some of the briefs again reminded Mr. Bush that the attack timing was flexible, and that, despite any perceived delay, the planned assault was on track."

Yet, the White House failed to act. "Officials at the Counter Terrorism Center of the CIA grew apoplectic", Mr. Eichenwald wrote. "On July 9, at a meeting of the counter terrorism group, one official suggested that the staff put in for a transfer so that somebody else would be responsible when the attack took place, two people who were there told me in interviews. The suggestion was batted down, they said, because there would be no time to train anyone else" to take their places to take the blame, he said.

In his book, Richard A. Clarke, former chief counter-terrorism adviser to the National Security Council in the early days of the Bush administration, recalls that after the 9/11 attack he was approached by a cabinet official who asked him "how can we go into Iraq? This has nothing to do with Iraq", he replied according to Ms. Rowley.

Excessive government secrecy - not just from the public at large, but among government officials themselves - is to blame, according to Ms. Rowley, who was named one of Time magazine's "Persons of the Year" in 2002. "If there had been more sharing of information, not only with agencies, but with the public, 9/11 could have been prevented", she said, recalling an article she wrote in 2010 for the Los Angeles Times called "9/11 and Wiki-Leaks: What If?"

Public curiosity would have demanded appropriate government action, she pointed out. "If we had Wiki-Leaks, 9/11 would have been prevented."