Out In The Cold 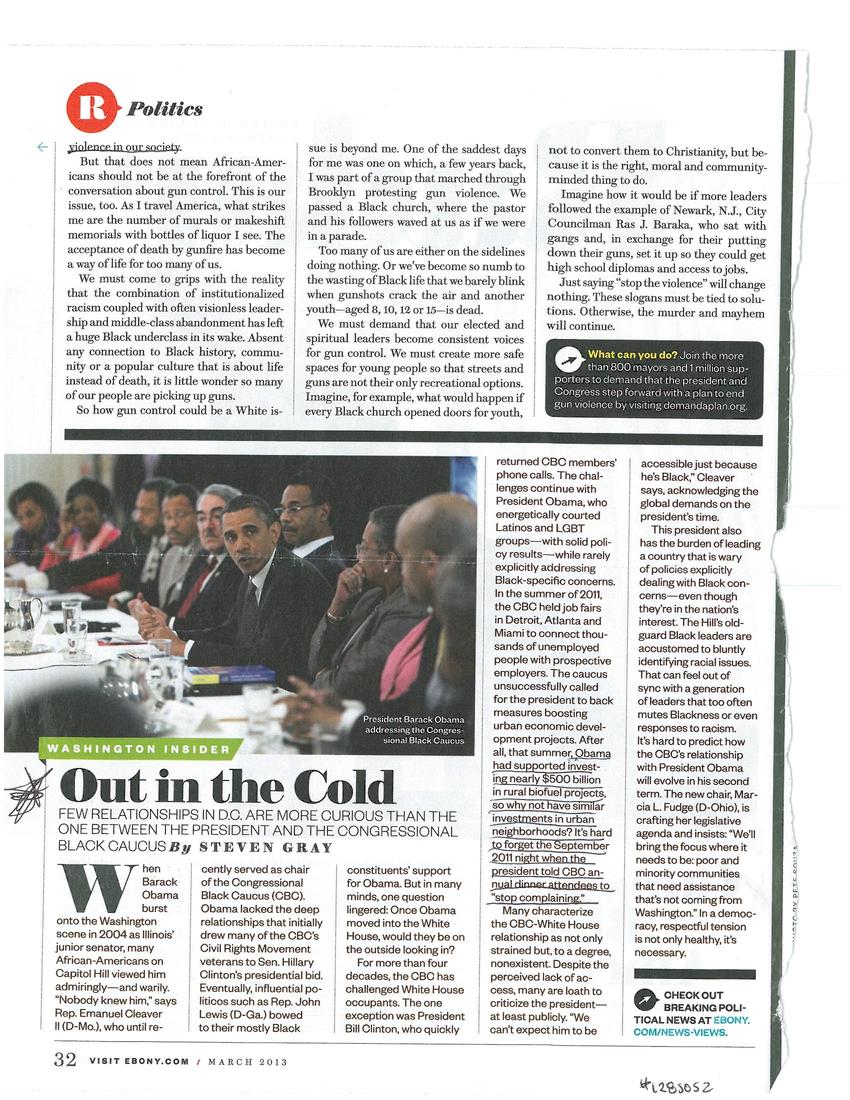 <- violence in our society.

But that does not mean African-Americans should not be at the forefront of the conversation about gun control. This is our issue, too. As I travel America, what strikes me are the number of murals or makeshift memorials with bottles of liquor I see. The acceptance of death by gunfire has become a way of life for too many of us.

We must come to grips with the reality that the combination of institutionalized racism coupled with often visionless leadership and middle-class abandonment has left a huge Black underclass in its wake. Absent any connection to Black history, community or a popular culture that is about life instead of death, it is little wonder so many of our people are picking up guns.

So how gun control could be a White issue is beyond me. One of the saddest days for me was one on which, a few years back, I was part of a group that marched through Brooklyn protesting gun violence. We passed a Black church, where the pastor and his followers waved at us as if we were in a parade.

Too many of us are either on the sidelines doing nothing. Or we've become so numb to the wasting of Black life that we barely blink when gunshots crack the air and another youth - aged 8, 10, 12 or 15 - is dead.

We must demand that our elected and spiritual leaders become consistent voices for gun control. We must create more safe spaces for young people so that streets and guns are not their only recreational options. Imagine, for example, what would happen if every Black church opened doors for youth, not to convert them to Christianity, but because it is the right, moral and community-minded thing to do.

Imagine how it would be if more leaders followed the example of Newark, N.J., City Councilman Ras J. Baraka, who sat with gangs and, in exchange for their putting down their guns, set it up so they could get high school diplomas and access to jobs.

Just saying "stop the violence" will change nothing. These slogans must be tied to solutions. Otherwise, the murder and mayhem will continue.

What can you do? Join the more than 800 mayors and 1 million supporters to demand that the president and Congress step forward with a plan to end gun violence by visiting demandaplan.org.

Out in the Cold
FEW RELATIONSHIPS IN D.C. ARE MORE CURIOUS THAN THE ONE BETWEEN THE PRESIDENT AND THE CONGRESSIONAL BLACK CAUCUS
By STEVEN GRAY

When Barack Obama burst onto the Washington scene in 2004 as Illinois' junior senator, many African-Americans on Capitol Hill viewed him admiringly - and warily. "Nobody knew him", says Rep. Emanuel Cleaver II (D-Mo.), who until recently served as chair of the Congressional Black Caucus (CBC). Obama lacked the deep relationships that initially drew many of the CBC's Civil Rights Movement veterans to Sen. Hillary Clinton's presidential bid. Eventually, influential politicos such as Rep. John Lewis (D-Ga.) bowed to their mostly Black constituents' support for Obama. But in many minds, one question lingered: Once Obama moved into the White House, would they be on the outside looking in?

For more than four decades, the CBC has challenged White House occupants. The one exception was President Bill Clinton, who quickly returned CBC members' phone calls. The challenges continue with President Obama, who energetically courted Latinos and LGBT groups - with solid policy results - while rarely explicitly addressing Black-specific concerns. In the summer of 2011, the CBC held job fairs in Detroit, Atlanta and Miami to connect thousands of unemployed people with prospective employers. The caucus unsuccessfully called for the president to back measures boosting urban economic development products. After all, that summer, Obama had supported investing nearly $500 billion in rural biofuel projects, so why not have similar investments in urban neighborhoods? It's hard to forget the September 2011 night when the president told CBC annual dinner attendees to "stop complaining".

Many characterize the CBC-White House relationship as not only strained but, to a degree, nonexistent. Despite the perceived lack of access, many are loath to criticize the president - at least publicly. "We can't expect him to be accessible just because he's Black", Cleaver says, acknowledging the global demands on the president's time.

This president also has the burden of leading a country that is wary of policies explicitly dealing with Black concerns - even though they're in the nation's interest. The Hill's old-guard Black leaders are accustomed to bluntly identifying racial issues. That can feel out of sync with a generation of leaders that too often mutes Blackness or even responses to racism. It's hard to predict how the CBC's relationship with President Obama will evolve in his second term. The new chair, Marcia L. Fudge (D-Ohio), is crafting her legislative agenda and insists: "We'll bring the focus where it needs to be: poor and minority communities that need assistance that's not coming from Washington." In a democracy, respectful tension is not only healthy, it's necessary.