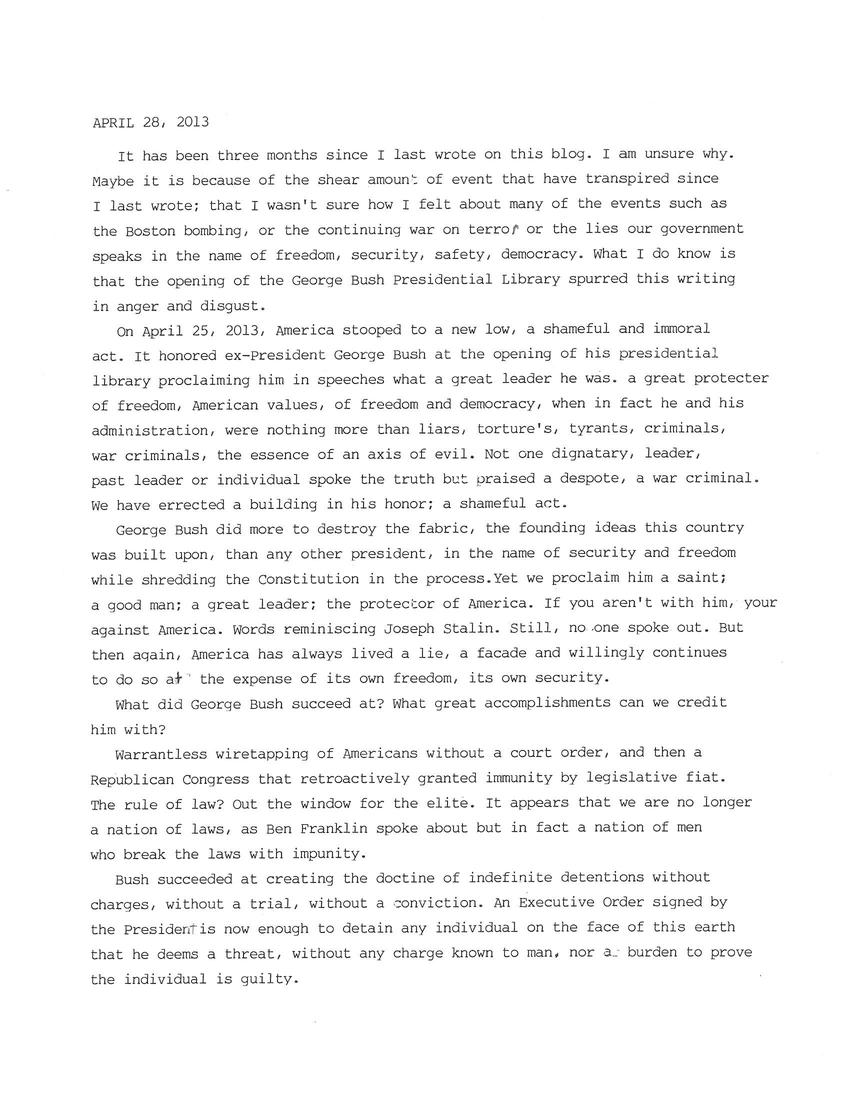 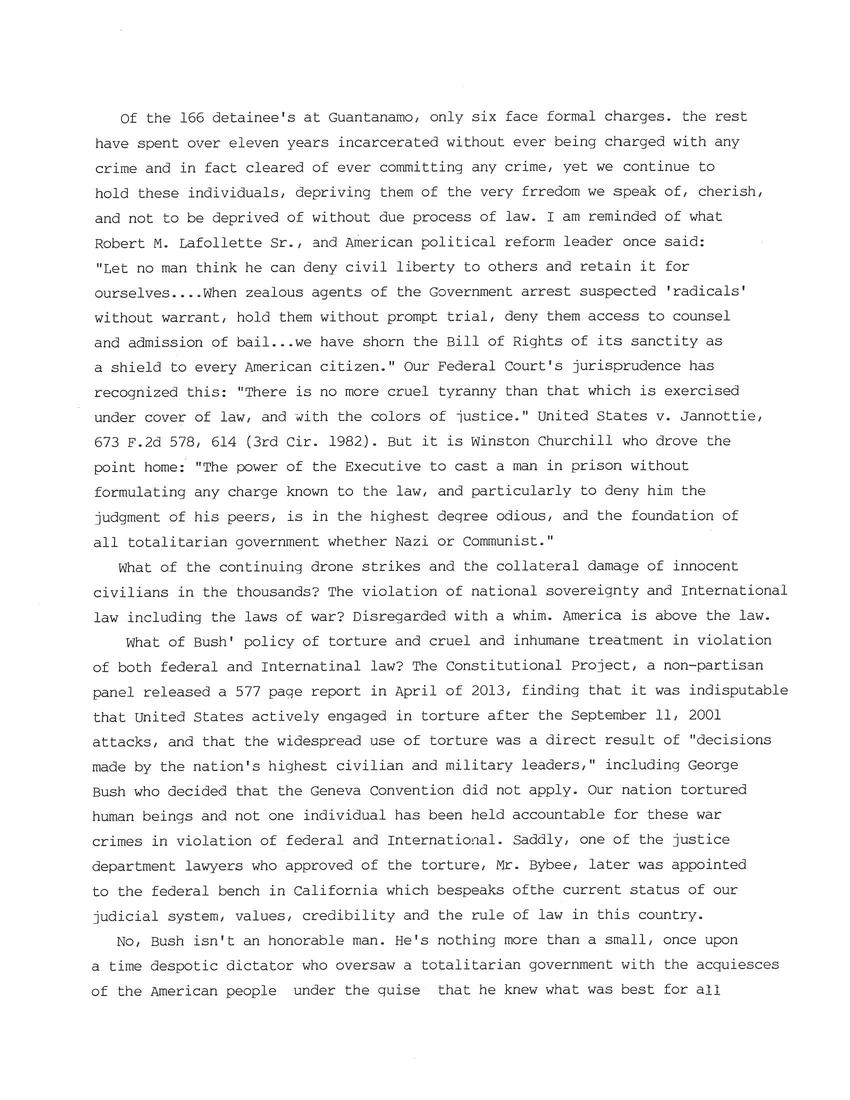 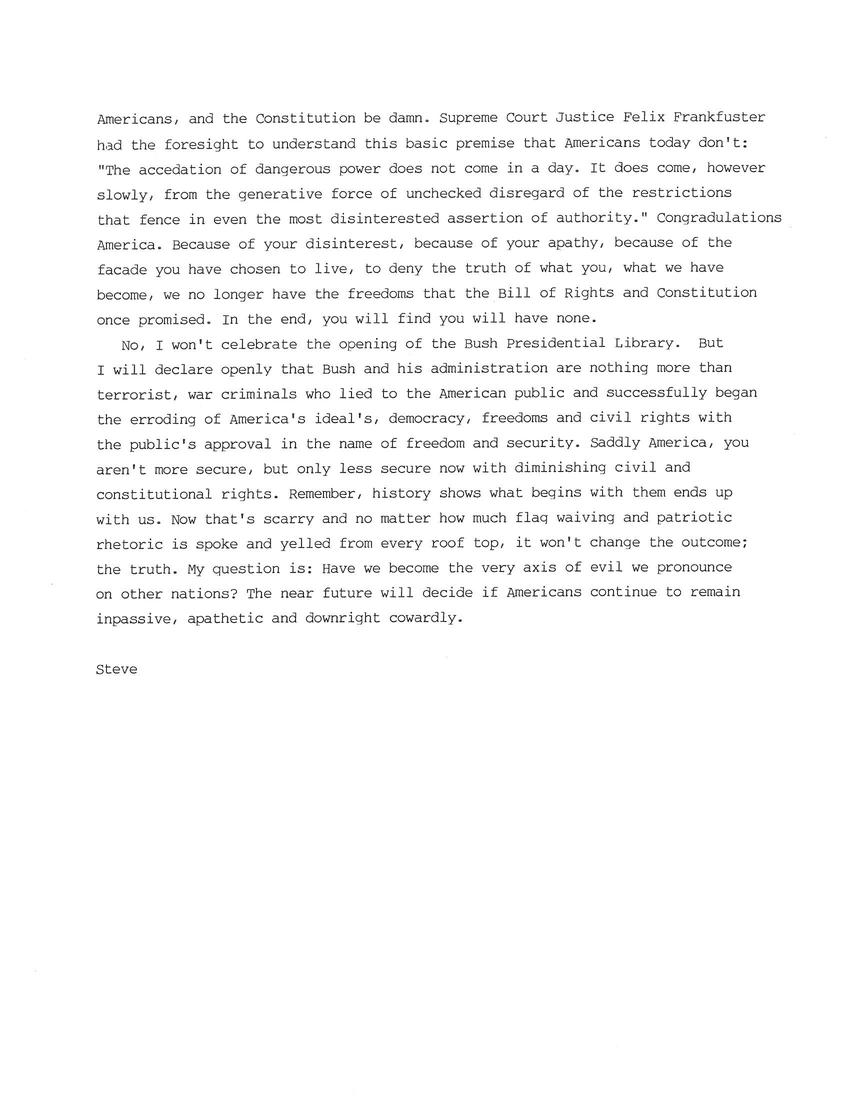 It has been three months since I last wrote on this blog. I am unsure why.
Maybe it is because of the shear amount of event that have transpired since
I last wrote; that I wasn't sure how I felt about many of the events such as
the Boston bombing, or the continuing war on terror or the lies our government
speaks in the name of freedom, security, safety, democracy. What I do know is
that the opening of the George Bush Presidential Library spurred this writing
in anger and disgust.

On April 25, 2013, America stooped to a new low, a shameful and immoral
act. It honored ex-President George Bush at the opening of his presidential
library proclaiming him in speeches what a great leader he was. a great protecter
of freedom, American values, of freedom and democracy, when in fact he and his
administration, were nothing more than liars, torture's, tyrants, criminals,
war criminals, the essence of an axis of evil. Not one dignatary, leader,
past leader or individual spoke the truth but praised a despote, a war criminal.
We have errected a building in his honor; a shameful act.

George Bush did more to destroy the fabric, the founding ideas this country
was built upon, than any other president, in the name of security and freedom
while shredding the Constitution in the process. Yet we proclaim him a saint;
a good man; a great leader; the protector of America. If you aren't with him, your
against America. Words reminiscing Joseph Stalin. Still, no one spoke out. But
then again, America has always lived a lie, a facade and willingly continues
to do so at the expense of its own freedom, its own security.

What did George Bush succeed at? What great accomplishments can we credit
him with?

Warrantless wiretapping of Americans without a court order, and then a
Republican Congress that retroactively granted immunity by legislative fiat.
The rule of law? Out the window for the elite. It appears that we are no longer
a nation of laws, as Ben Franklin spoke about but in fact a nation of men
who break the laws with impunity.

Bush succeeded at creating the doctine of indefinite detentions without
charges, without a trial, without a conviction. An Executive Order signed by
the President is now enough to detain any individual on the face of this earth
that he deems a threat, without any charge know to man, nor a burden to prove
the individual is guilty.

Of the 166 detainee's at Guantanamo, only six face formal charges. the rest
have spent over eleven years incarcerated without ever being charged with any
crime and in fact cleared of ever committing any crime, yet we continue to
hold these individuals, depriving them of the very freedom we speak of, cherish,
and not to be deprived of without due process of law. I am reminded of what
Robert M. Lafollette Sr., and American political reform leader once said:
"Let no man think he can deny civil liberty to others and retain it for
ourselves....When zealous agents of the Government arrest suspected 'radicals'
without warrant, hold them without prompt trial, deny them access to counsel
and admission of bail...we have shorn the Bill of Rights of its sanctity as
a shield to every American citizen." Our Federal Court's jurisprudence has
recongnized this: "There is no more cruel tyranny than that which is exercised
under cover of law, and with the colors of justice." United States v. Jannottie,
673 F.2d 578,614 (3rd Cir. 1982). But it is Winston Churchill who drove the
point home: "The power of the Executive to cast a man in prison without
formulating any charge known to the law, and particularly to deny him the
judgment of his peers, is in the highest degree odious, and the foundation of
all totalitarian government whether Nazi or Communist."

What of the continuing drone strikes and the collateral damage of innocent
civilians in the thousands? The violation of national sovereignty and International
law including the laws of war? Disregarded with a whim. America is above the law.

What of Bush' policy of torture and cruel and inhumane treatment in violation
of both federal and International law? The Constitutional Project, a non-partisan
panel released a 577 page report in April of 2013, finding that is was indisputable
that United States actively engaged in torture was a direct result of "decisions
made by the nation's highest civilian and military leaders," including George
Bush who decided that the Geneva Convention did not apply. Our nation tortured
human beings and not one individual has been held accountable for these war
crimes in violation of federal and International. Saddly, one of the justice
department lawyers who approved of the torture, Mr. Bybee, later was appointed
to the federal bench in California which bespeaks of the current status of our
judicial system, values, credibility and the rule of law in this country.

No, Bush isn't an honorable man. He's nothing more than a small, once upon
a time despotic dictator who oversaw a totalitarian government with the acquiesces
of the American people under the quise that he knew what was best for all

Americans, and the Constitution be damn. Supreme Court Justice Felix Frankfuster
had the foresight to understand this basic premise that Americans today don't:
"The accedation of dangerous power does not come in a day. It does come, however
slowly, from the generative force of unchecked disregard of the restrictions
that fence in even the most disinterested assertion of authority." Congradulations
America. Because of your disinterest, because of your apathy, because of the
facade you have chosen to live, to deny the truth of what you, what we have
become, we no longer have the freedoms that the Bill of Rights and Constitution
once promised. In the end, you will find you will have none.

No, I won't celebrate the opening of the Bush Presidential Library. But
I will declare openly that Bush and his administration are nothing more than
terrorist, war criminals who lied to the American public and successfully began
the erroding of America's ideal's, democracy, freedoms and civil rights with
the public's approval in the name of freedom and security. Saddly America, you
aren't more secure, but only less secure now with diminishing civil and
constituional rights. Remember, history shows what begins with them ends up
with us. Now that's scarry and no matter how much flag waiving and patriotic
rhetoric is spoke and yelled from every roof top, it won't change the outcome;
the truth. My question is: Have we become the very axis of evil we pronounce
on other nations? The near future will decide if Americans continue to remain
inpassive, apathetic and downright cowardly.

This comment was removed because it violated our community guidelines which forbid hate speech.