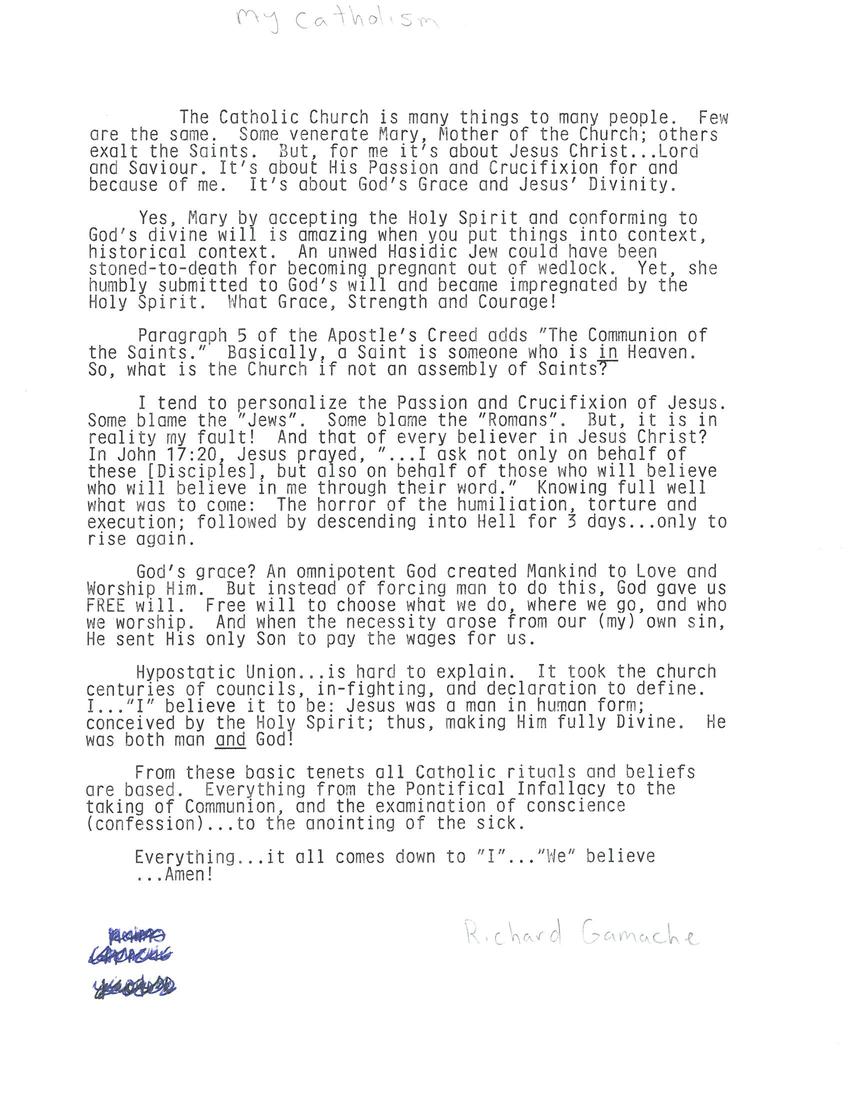 The Catholic Church is many things to many people. Few
are the same. Some venerate Mary, Mother of the Church; others
exalt the Saints. But, for me it's about Jesus Christ...Lord
and Saviour. It's about His Passion and Crucifixion for and
because of me. It's about God's Grace and Jesus' Divinity.

Yes, Mary by accepting the Holy Spirit and conforming to
God's divine will is amazing when you put things into context,
historical context. An unwed Hasidic Jew could have been
stoned-to-death for becoming pregnant out of wedlock. Yet, she
humbly submitted to God's will and became impregnated by the
Holy Spirit. What Grace, Strength and Courage!

Paragraph 5 of the Apostle's Creed adds "The Communion of
the Saints." Basically, a Saint is someone who is in Heaven.
So, what is the church if not an assembly of Saints?

I tend to personalize the Passion and Crucifixion of Jesus.
Some blame the "Jews". Some blame the "Romans". But, it is in
reality my fault! And that of every believer in Jesus Christ?
In John 17:20, Jesus prayed,"...I ask not only on behalf of
these (Disciples), but also on behalf of those who will believe
who will believe in me through their word." Knowing full well
what was to come: The horror of the humiliation, torture and
execution; followed by descending into Hell for 3 days...only to
rise again.

God's grace? An omnipotent God created Mankind to Love and
Worship Him. But instead of forcing man to do this, God gave us
FREE will. Free will to choose what we do, where we go, and who
we worship. And when the necessity arose from our (my) own sin,
He sent His only Son to pay the wages for us.

Hypostatic Union...is hard to explain. It took the church
centuries of councils, in-fighting, and declaration to define.
I..."I" believe it to be: Jesus was a man in human form;
conceived by the Holy Spirit; thus, making Him fully Divine. He
was both man and God!

From these basic tenets all Catholic rituals and beliefs
are based. Everything from the Pontifical Infallacy to the
taking of Communion, and the examination of conscience
(confession)...to the anointing of the sick.