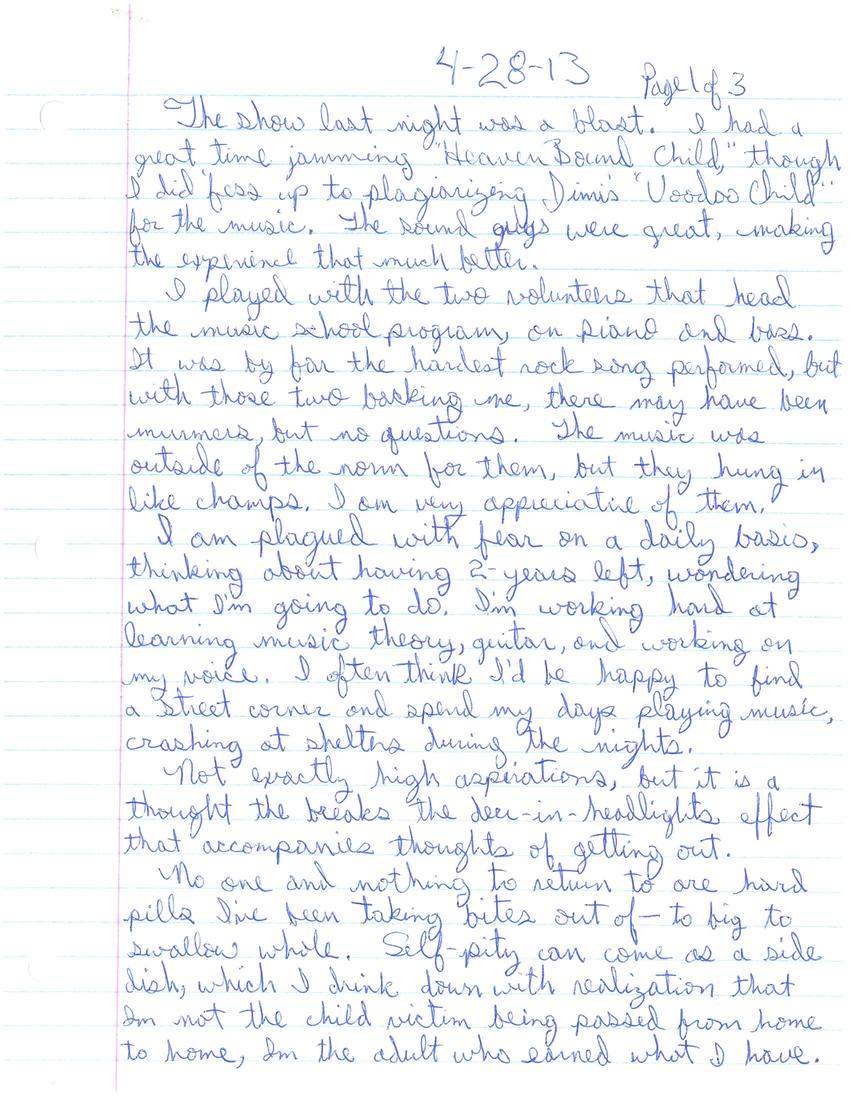 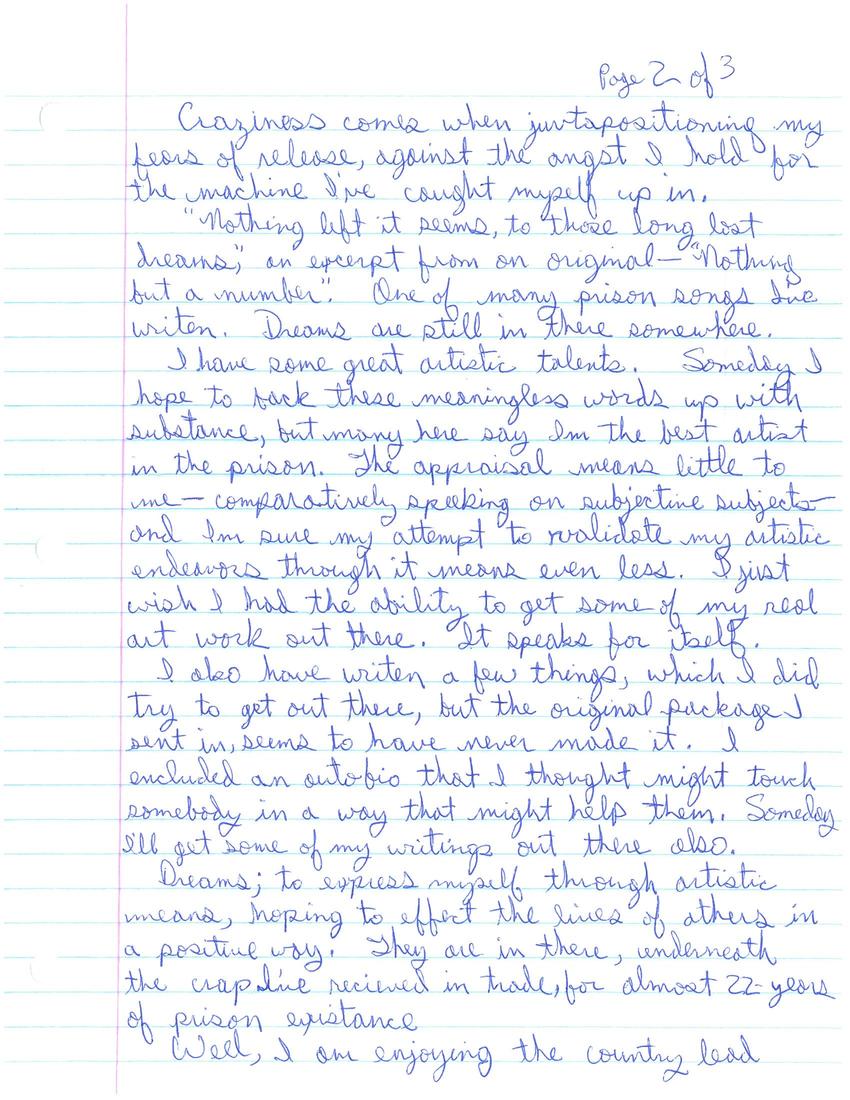 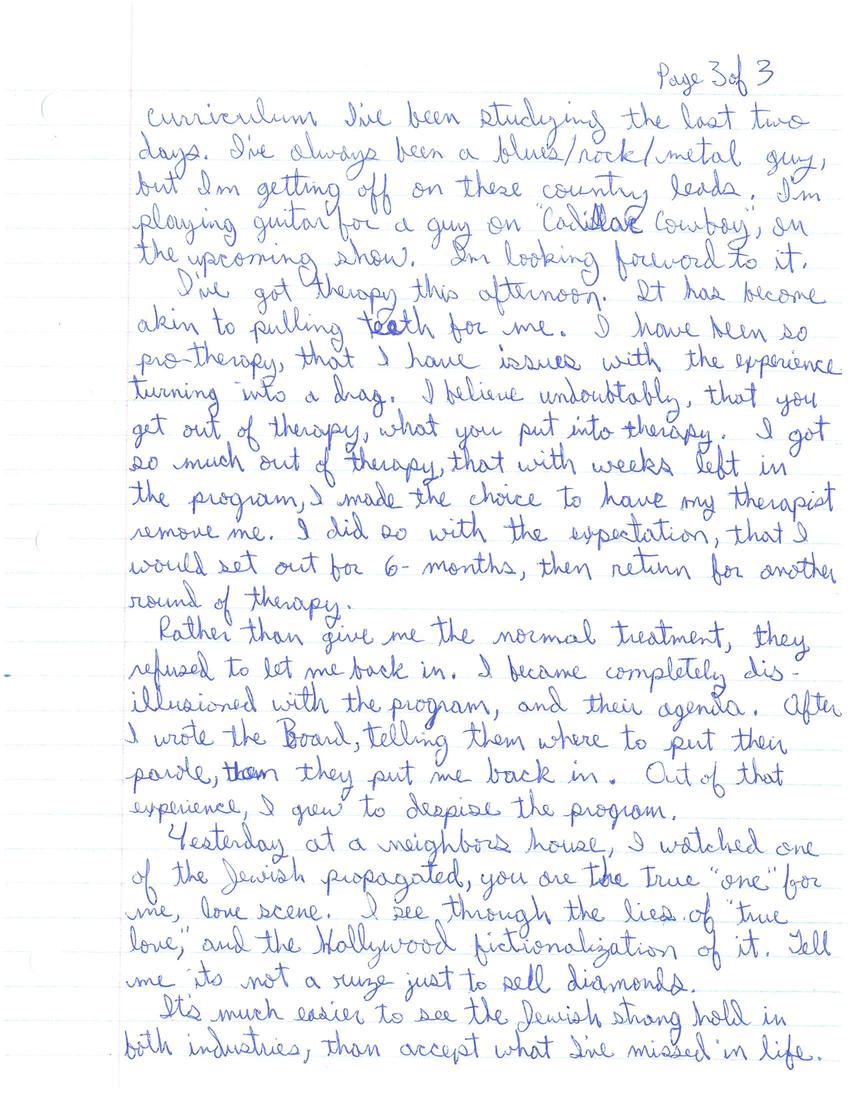 The show last night was a blast. I had a great time jamming "Heaven Bound Child," though I did 'fess up to plagiarizing Jimi's "Voodoo Child" for the music. The sound guys were great, making the experience that much better.

I played with the two volunteers that head the music school program, on piano and bass. It was by far the hardest rock song performed, but with those two backing me, there may have been murmmers but no questions. The music was outside of the norm for them, but they hung in like champs. I am very appreciative of them.

I am plagued with fear on a daily basis, thinking about having 2-years left, wondering what I'm going to do. I'm working hard at learning music theory, guitar, and working on my voice. I often think I'd be happy to find a street corner and spend my days playing music, crashing at shelters during the nights.

Not exactly high aspirations, but it is a thought that breaks the deer-in-headlights effect that accompanies thoughts of getting out.

No one and nothing to return to are hard pills I've been taking bites out of - too big to swallow whole. Self-pity can come as a side dish, which I drink down with realization that I'm not the child victim being passed from home to home, I'm the adult who earned what I have.

Craziness comes when juxtapositioning my frears of release, against the angst I hold for the machine I've caught myself up in.

"Nothing left it seems, to those long lost dreams," an excerpt from an original - "Nothing but a number." One of many prison songs I've written. Dreams are still in there somewhere.

I have some great artistic talents. Someday I hope to back these meaningless words up with substance, but many here say I'm the best artist in the prison. The appraisal means little to me - comparatively speaking on subjective subjects - and I'm sure my attempt to validate my artistic endeavors through it means even less. I just wish I had the ability to get some of my real art work out there. It speaks for itself.

I also have written a few things, which I did try to get out there, but the original package I sent in, seems to have never made it. I included an autobio that I thought might touch somebody in a way that might help them. Someday I'll get some of my writings out there also.

Dreams; to express myself throught artistic means, hoping to effect the lives of others in a positive way. They are in there, underneath the crap I've recieved in trade, for almost 22-years of prison existance.

Well, I am enjoying the country lead curriculum I've been studying the last two days. I've always been a blues/rock/metal guy, but I'm getting off on these country leads. I'm playing guitar for a guy on "Cadillac Cowboy," on the upcoming show. I'm looking forward to it.

I've got therapy this afternoon. It has become akin to pulling teeth for me. I have been so pro-therapy, that I have issues with the experience turning into a drag. I believe undoubtably, that you get out of therapy what you put into therapy. I got so much out of therapy, that with weeks left in the program, I made the choice to have my therapist remove me. I did so with the expectation, that I would set out for 6-months, then return for another round of therapy.

Rather than give me the normal treatment, they refused to let me back in. I became completely disillusioned with the program, and their agenda. After I wrote the board, telling them where to put their parole, then they put me back in. Out of that experience, I grew to despise the program.

Yesterday at a neighbors house, I watched one of the Jewish propageted, you are the true "one" for me, love scene. I see through the lies of "true love," and the Hollywood fictionalization of it. Tell me it's not a ruze just to sell diamonds.

It's much easier to see the Jewish strong hold in both industries, than accept what I've missed in life.