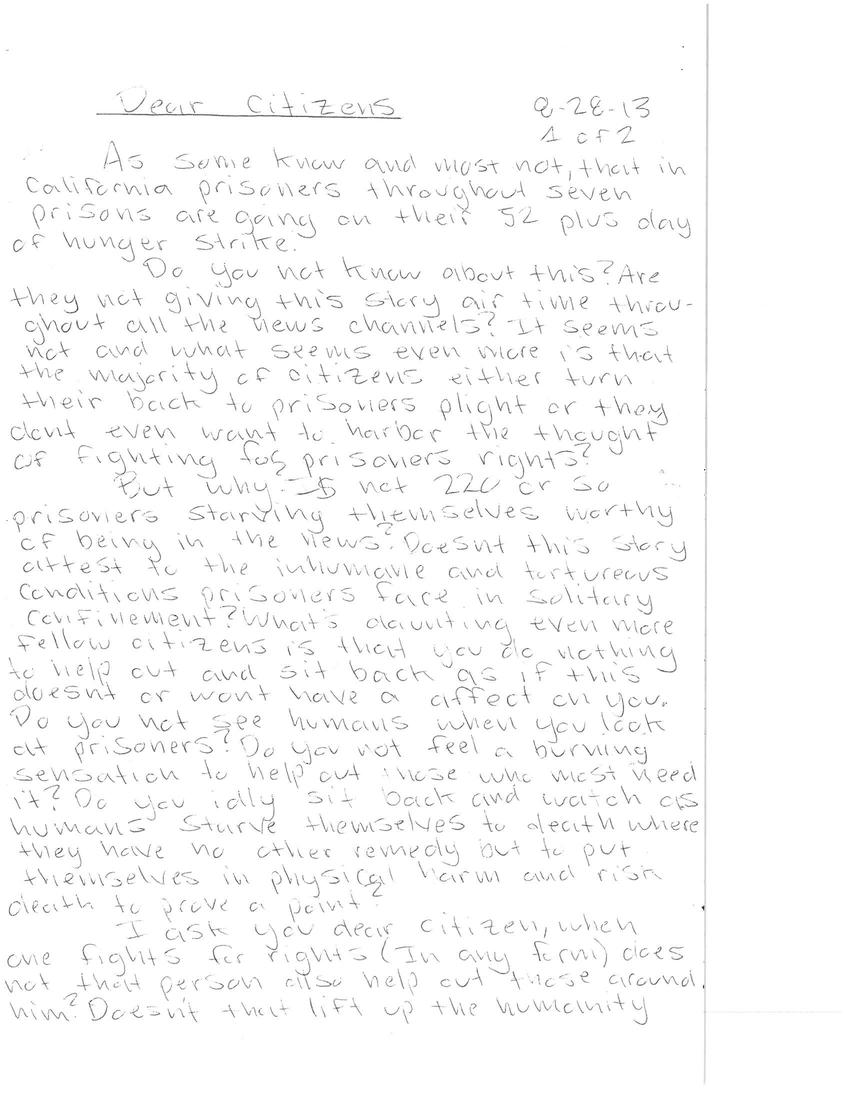 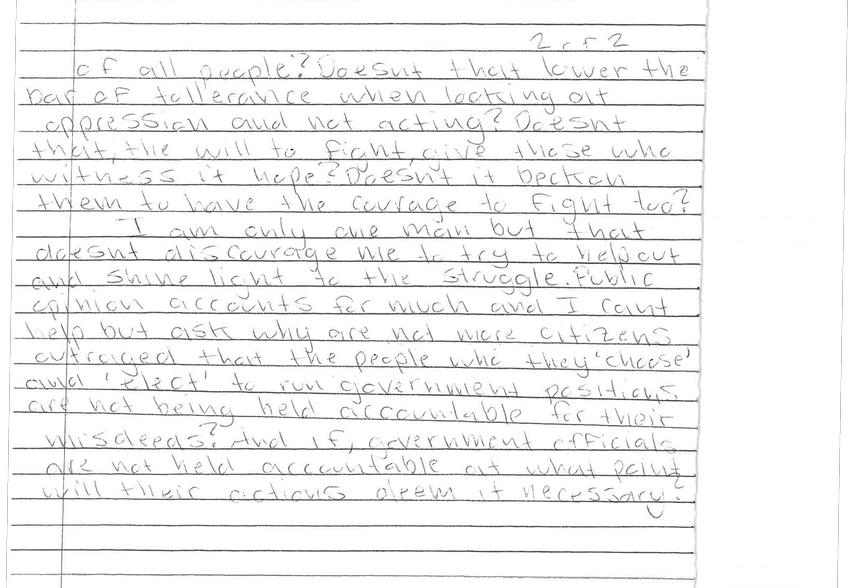 As some know and most not, that in California prisoners throughout seven prisons are going on their 52 plus day of hunger strike.

Do you not know about this? Are they not giving this story air time throughout all the news channels? It seems not and what seems even more is that the majority of citizens either turn their back to prisoners' plight or they don't even want to harbor the thought of fighting for prisoners' rights?

But why? Is not 220 or so prisoners starving themselves worthy of being in the news? Doesn't this story attest to the inhumane and torturous conditions prisoners face in solitary confinement? What's daunting even more, fellow citizens, is that you do nothing to help out and sit back as if this doesn't or won't have an effect on you. Do you not see humans when you look at prisoners? Do you not feel a burning sensation to help out those who most need it? Do you idly sit back and watch as humans starve themselves to death where they have no other remedy but to put themselves in physical harm and risk death to prove a point?

I ask you, dear citizen, when one fights for rights (in any form) does not that person also help out those around him? Doesn't that lift up the humanity of all people? Doesn't that lower the bar of tolerance when looking at oppression and not acting? Doesn't that, the will to fight, give those who witness it hope? Doesn't it beckon them to have the courage to fight too?

I am only one man but that doesn't discourage me to try to help out and shine light to the struggle. Public opinion accounts for much and I can't help but ask why are not more citizens outraged that the people who they 'choose' and 'elect' to run government positions are not being held accountable for their misdeeds? And if government officials are not held accountable, at what point will their actions deem it necessary?

Yes, I followed the story on the internet. I have a great deal of respect for what those men did. It's really amazing, when you think about it, they organized that from inside a supermax.

I don't know what will happen once the hearings start, but it's a *start* and it's meaningful.

It just goes to show you that change can start from the inside (and from people who have been there and know what is happening).

I've done what I can both directly and indirectly to support them. 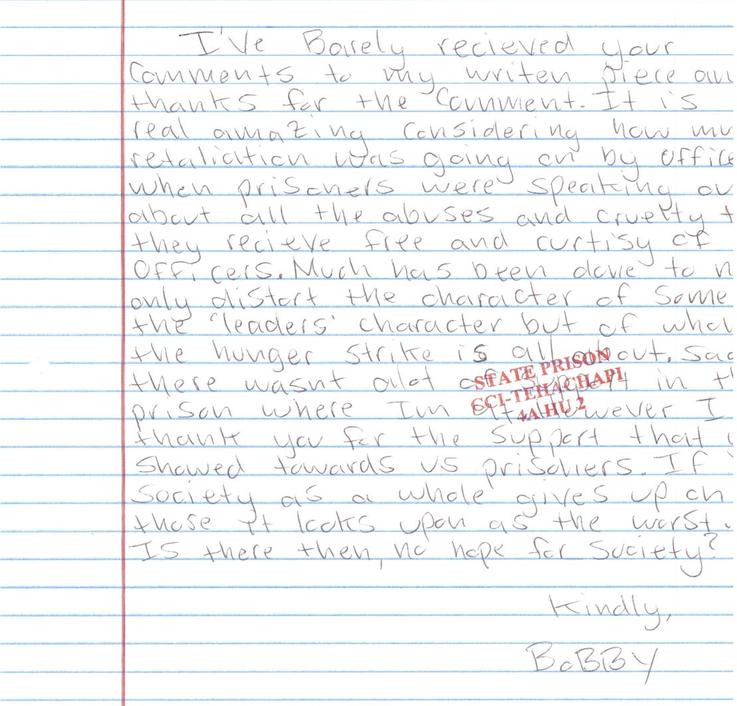 I agree, the press was pretty bad. There were a few in depth stories on the alternative press (and even a few on some mainstream magazines) - but much of it was garbage.

The really hopeful thing is that some of the reps. out in California really get it. And they are on the side of change. There are also some pretty big organizations that are supportive.

I think the lawsuit might help most. But I do believe that change will come. It will not look as nice as folks want (not everyone will head out into general pop). But, in my opinion, they will support a 'step-down' mechanism for folks - so there is a way out of solitary.

We are responsible, as citizens, for what has happened. I know. It's going to take a real change in OUR thinking to get the system reformed. And honestly, I don't think we want to commit to that. We - as a society - really still do just want to lock people up and throw away the key.

On the other hand, we don't want to pay for what we have. That - I believe - will ease some of the pressure. 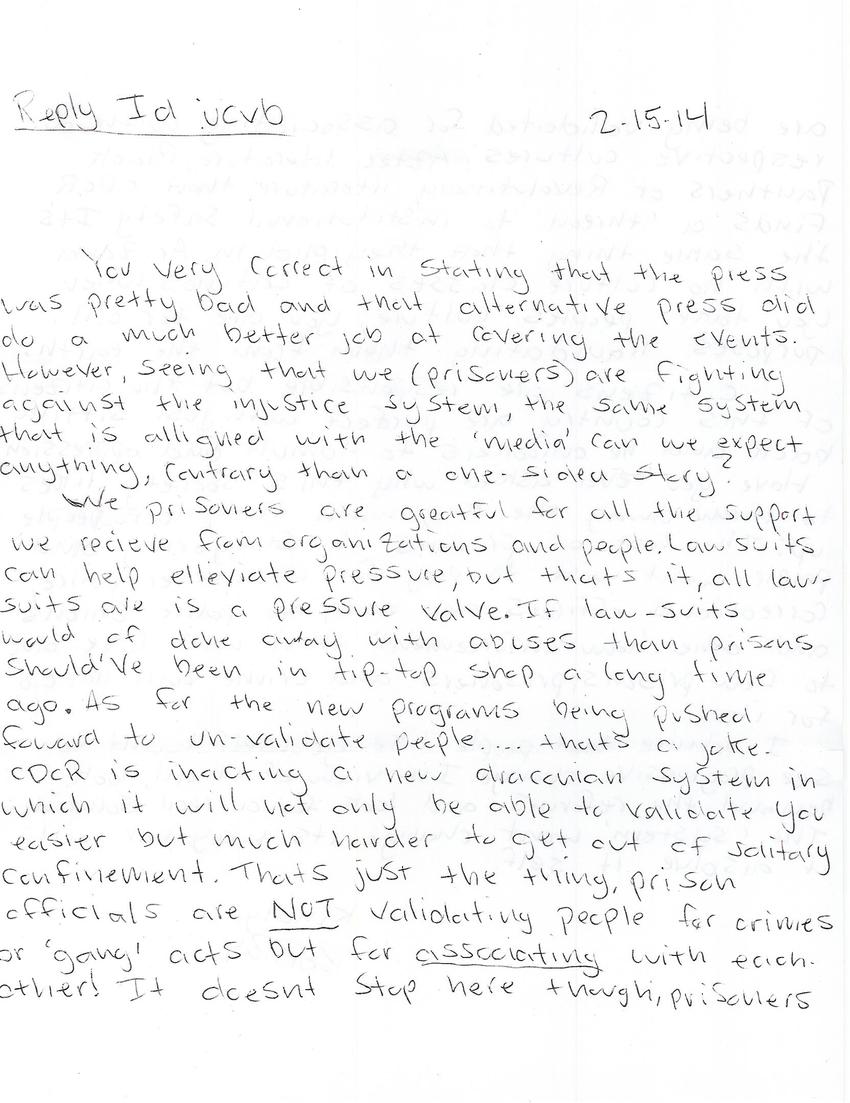 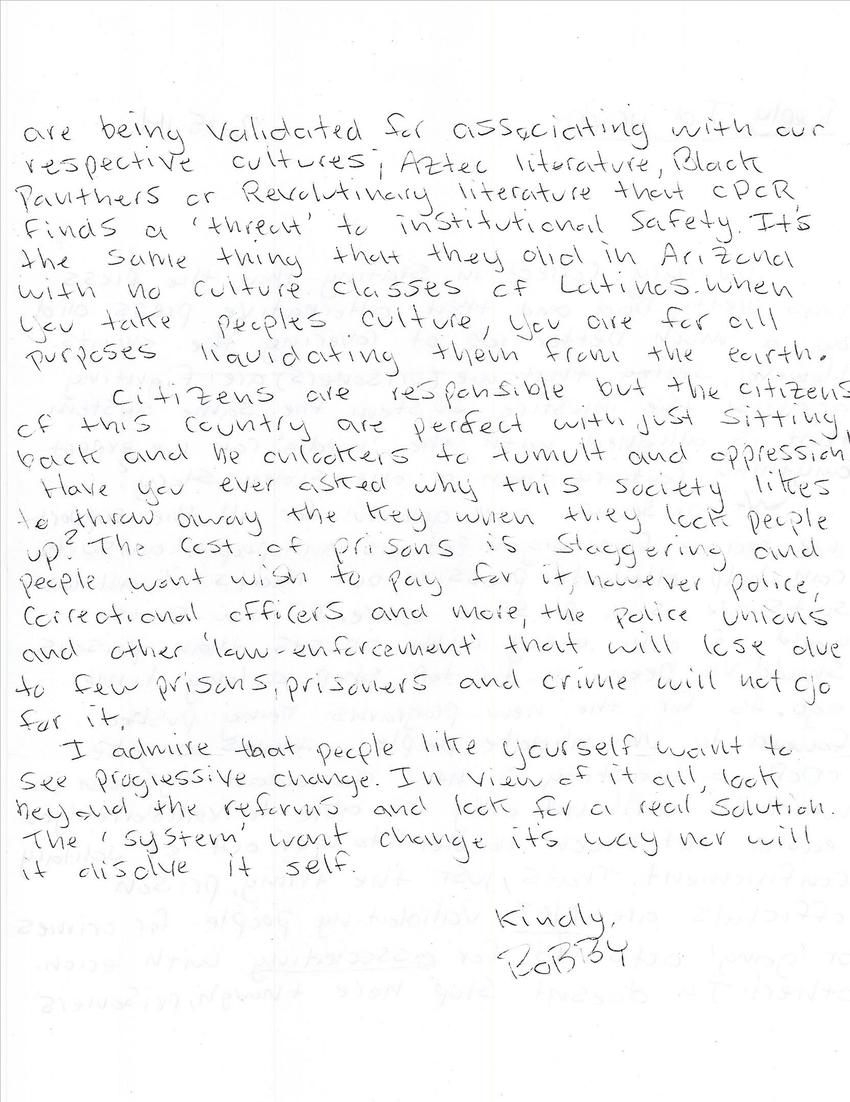