The World Of Metal! 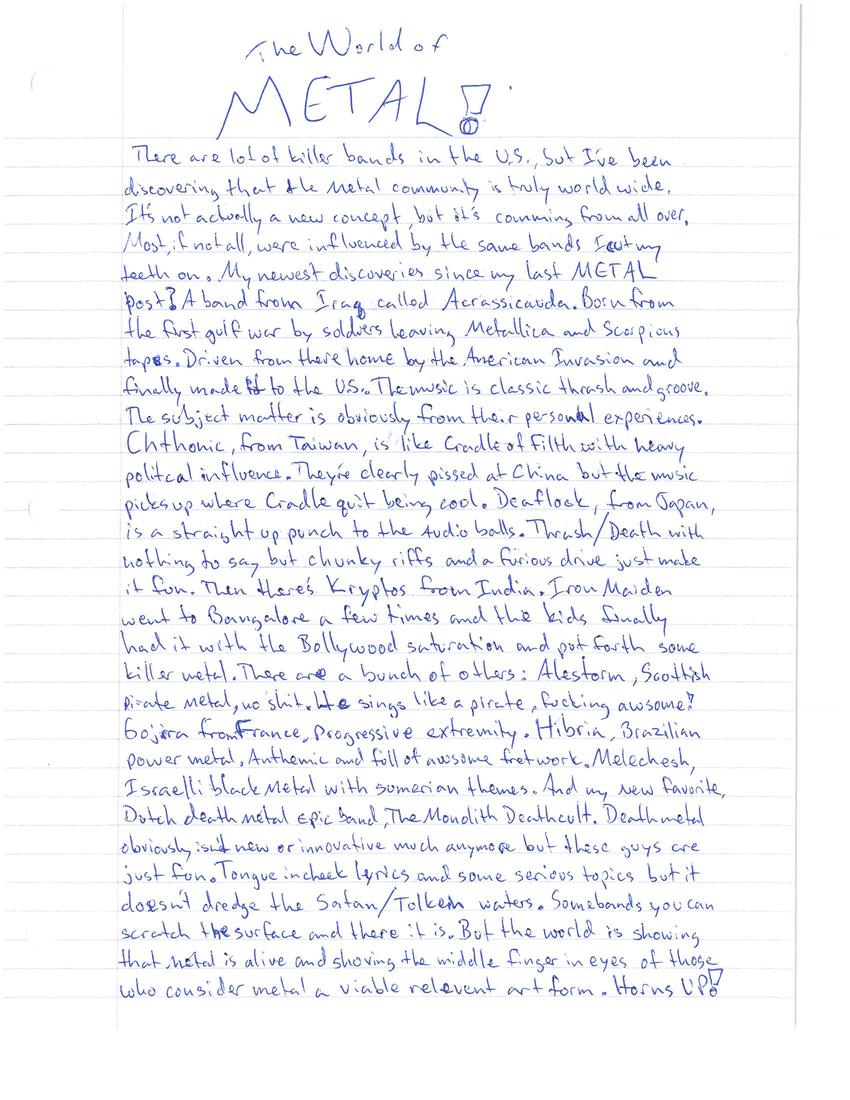 The Wold of METAL!
There are lot of killer bands int eh U.S., but I've been discovering that the metal community is truly worldwide. It's not actually a new concept, but it's coming from all over. Most, if not all, were influenced by the same bands I cut my teeth on. My newest discoveries since my last METAL post? A band from Iraq called Acrassicavida. Born from the first gulf war by soldiers leaving Metallica and Scorpious tapes. Driven from their home by the American Invasion and finally made it to the US. The music is classic thrash and groove. The subject matter is obviously from their personal experiences. Chthonic, from Taiwan, is like Cradle of Filth with heavy political influence. They're clearly pissed at China but the music picks up where Cradle quit being cool. Deaflock, from japan, is straight up punch to the Audio balls. Thrash/Death with nothing to say but chunky riffs and a furious drive just make it fun. Then there's Kryptos from India. Iron maiden went to Bangalore a few times and the kids finally had it with the Boyllywood saturation and put forth some killer metal. There are a bunch of others: Alestorm, Scottish pirate metal, no shit. He sings like a pirate, fucking awesome! Gogira from France, progressive extremity. Hibria, Brazilian power metal, Anthemic and full of awesome fretwork. Melechesh, Isralie black metal with sumerian themes. And my new favorite, obviously isn't new or innovative much anymore b ut these guys are just fun. Tongue in cheek lyrics and some serious topics but it doesn't dredge the Satal/Tolkien waters. Some bands you can scratch the surface and there it is. But the world is showing that metal is alive and shoving the middle finger in eyes of those who consider metal a viable relevant art form. Horns UP!

Good to see you writing again. Well, we like what we like. Christian love has just plain taken all the wind out of my metal sails I'm afraid.

I do, however, look upon it as a valid form of art, and I don't criticize it negatively, as I feel I lost that right when I ceased to enjoy it personally, as an art form. I hate it when somebody who obviously has no appreciation for the art that I do love becomes a critic of it. You can sense their disdain in their fakey reviews in things like "Rolling Stone" magazine and such.

I break out a little Staind every now and again still, (though I don't think they're Metal, but merely harder rock). This is in large measure because of Aaron Lewis' marvelous lyrical ability and introspection. That's about as close as I can get anymore the the thrash and riot of metal music.

For the dark side, give me Johnny Cash's last few years of sparse, haunting redemption songs, and apocalyptic imagery, with his mournful, pain laden, "been there, done that" voice.

I do love reading essays on virtually anything, as long as the writer is sincere on the subject they're writing about. Enthusiasm is enthusiasm, and it is always infectuous. Your essays bring that out. You make me wish I could love this music that is so precious to you. That's what honest, good writing does. Welcome back.
Thanks for writing! I finished the transcription for your post. Horns UP!