A Single Act: Status Report on Lifers in Massachusetts 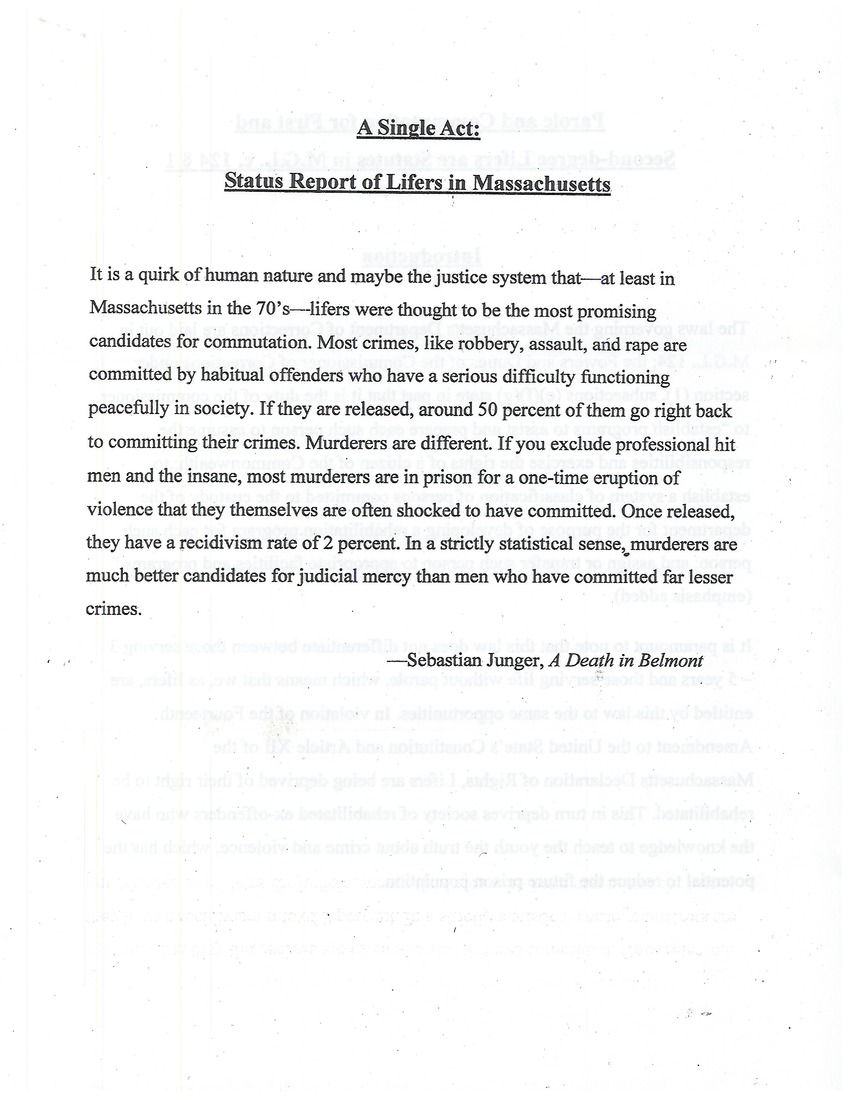 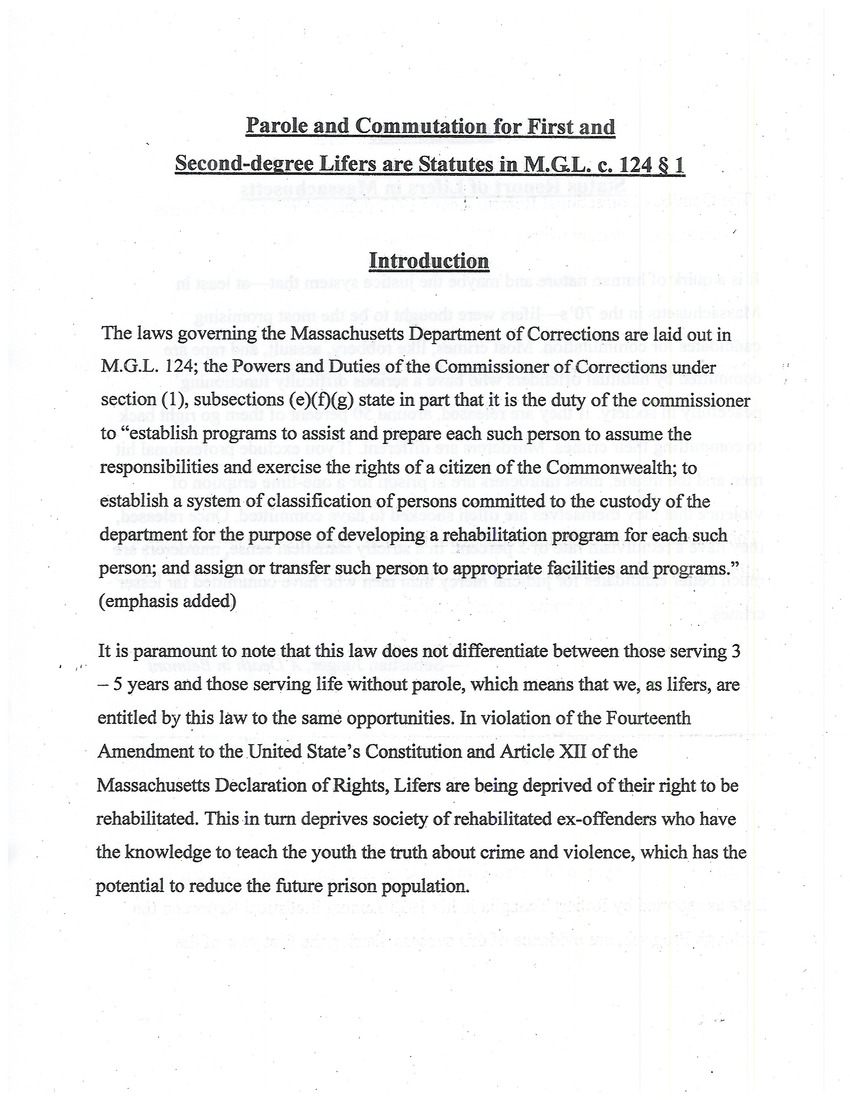 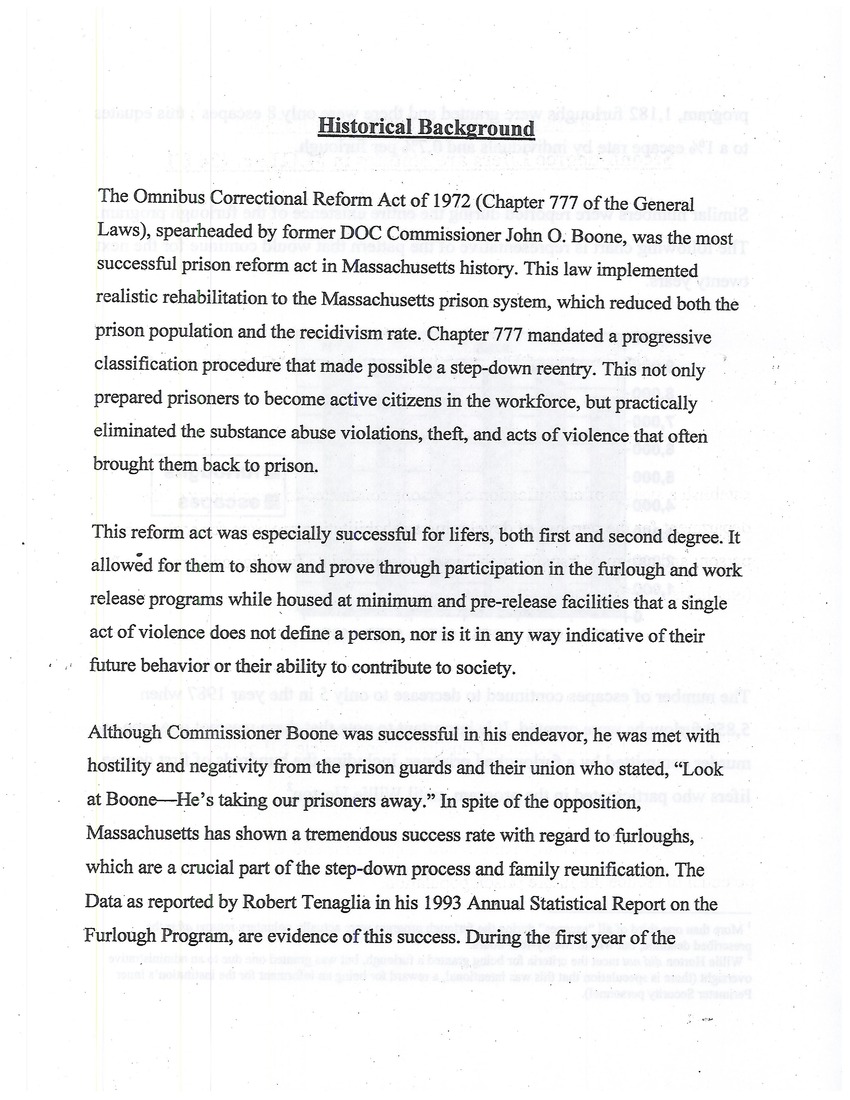 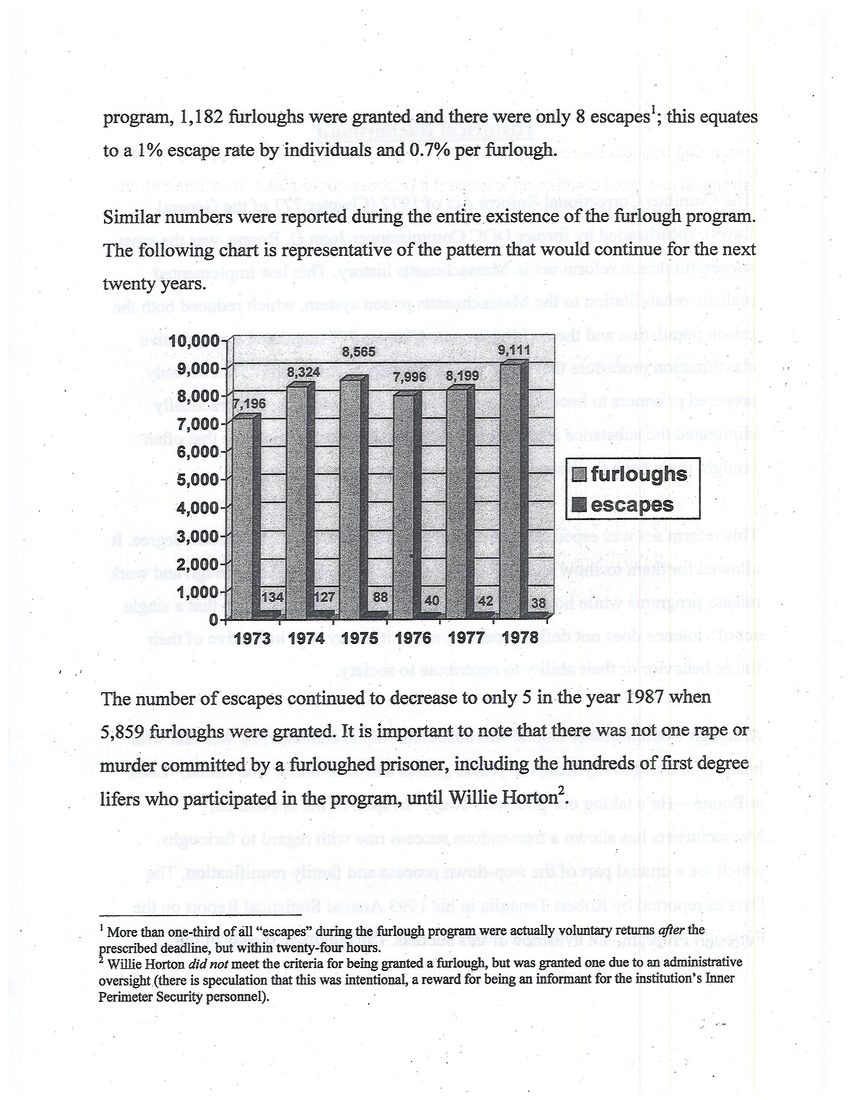 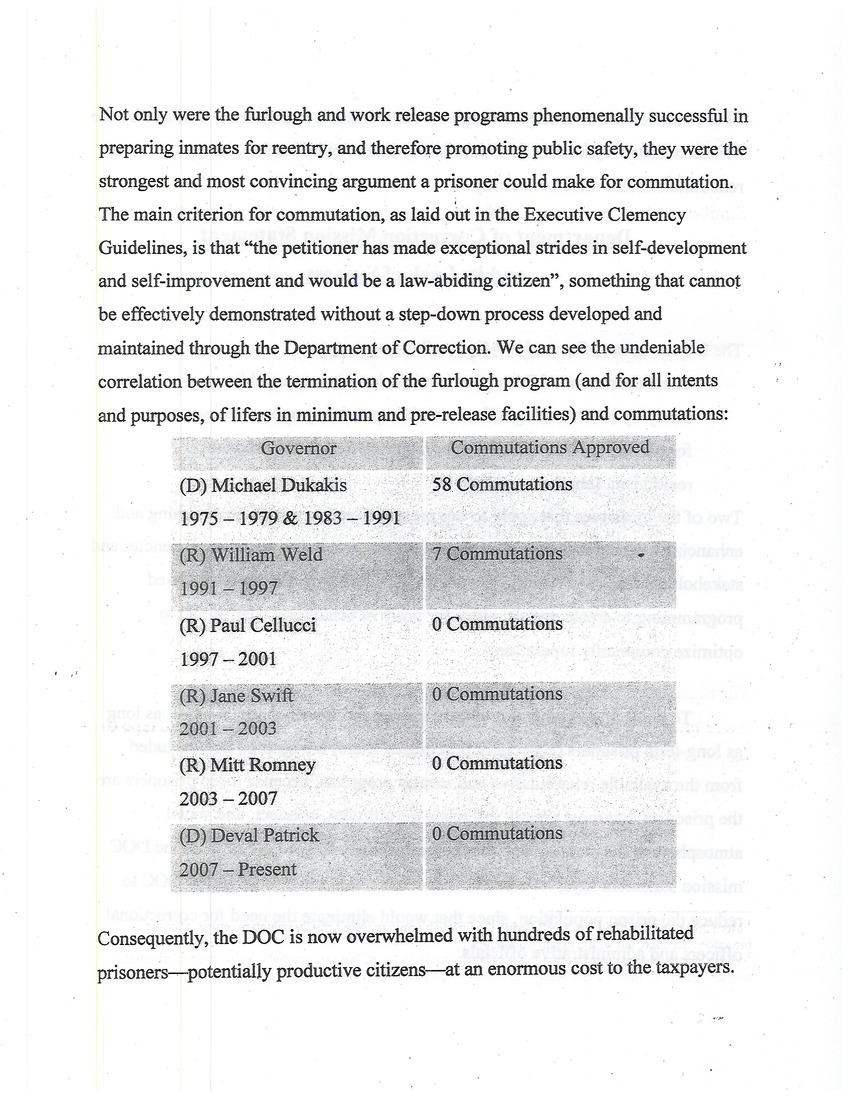 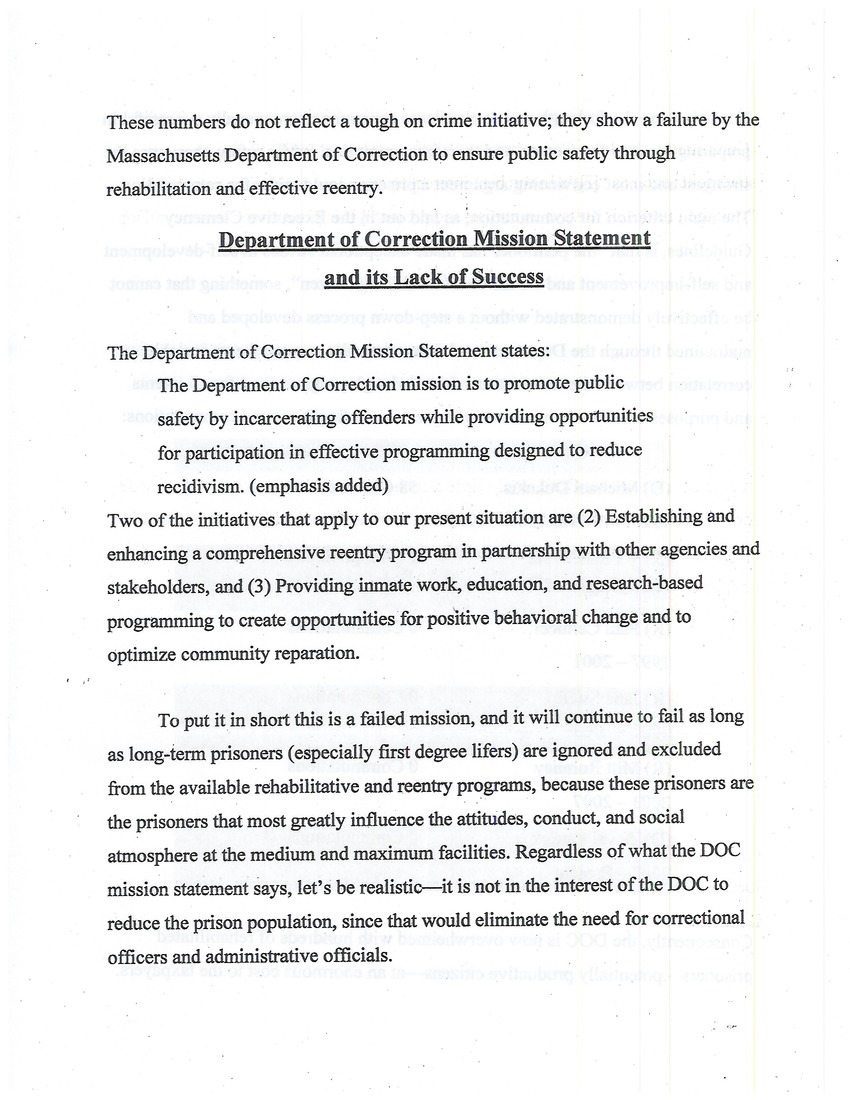 Status Report of Lifers in Massachusetts

It is a quirk of human nature and maybe the justice system that - at least in Massachusetts in the 70's - lifers were thought to be the most promising candidates for commutation. Most crimes, like robbery, assault, and rape are committed by habitual offenders who have a serious difficulty functioning peacefully in society. If they are released, around 50 percent of them go right back to committing their crimes. Murderers are different. If you exclude professional hit men and the insane, most murderers are in prison for a one-time eruption of violence that they themselves are often shocked to have committed. Once released, they have a recidivism rate of 2 percent. In a strictly statistical sense, murderers are much better candidates for judicial mercy than men who have committed far lesser crimes.

- Sebastian Junger, A Death in Belmont

Parole and Commutation for First and
Second-degree Lifers are Statutes in M.G.L. c. 124 [symbol] 1

The laws governing the Massachusetts Department of Corrections are laid out in M.G.L. 124; the Powers and Duties of the Commissioner of Corrections under section (1), subsections (e)(f)(g) state in part that it is the duty of the commissioner to "establish programs to assist and prepare each such person to assume the responsibilities and exercise the rights of a citizen of the Commonwealth; to establish a system of classification of persons committed to the custody of the department for the purpose of developing a rehabilitation program for each such person; and assign or transfer such person to appropriate facilities and programs."
(emphasis added)

It is paramount to note that this law does not differentiate between those serving 3-5 years and those serving life without parole, which means that we, as lifers, are entitled by this law to the same opportunities. In violation of the Fourteenth Amendment to the United State's Constitution and Article XII of the Massachusetts Declaration of Rights, Lifers are being deprived of their right to be rehabilitated. This in turn deprives society of rehabilitated ex-offenders who have the knowledge to teach the youth the truth about crime and violence, which has the potential to reduce the future prison population.

The Omnibus Correctional Reform Act of 1972 (Chapter 777 of the General Laws), spearheaded by former DOC Commissioner John O. Boone, was the most successful prison reform act in Massachusetts history. This law implemented realistic rehabilitation to the Massachusetts prison system, which reduced both the prison population and the recidivism rate. Chapter 777 mandated a progressive classification procedure that made possible a step-down re-entry. This not only prepared prisoners to become active citizens in the workforce, but practically eliminated the substance abuse violations, theft, and acts of violence that often brought them back to prison.

This reform act was especially successful for lifers, both first and second degree. It allowed for them to show and prove through participation in the furlough and work release programs while housed at minimum and pre-release facilities that a single act of violence does not define a person, nor is it any way indicative of their future behaviour or their ability to contribute to society.

Although Commissioner Boone was successful in his endeavour, he was met with hostility and negativity from the prison guards and their union who stated, "Look at Boone - He's taking our prisoners away." In spite of the opposition, Massachusetts has shown a tremendous success rate with regard to furloughs, which are a crucial part of the step-down process and family reunification. The Data as reported by Robert Tenaglia in his 1993 Annual Statistical Report on the Furlough Program, are evidence of this success. During the first year of the program, 1,182 furloughs were granted and there were only 8 escapes[1]; this equates to a 1% escape rate by individuals and 0.7% per furlough.

Similar numbers were reported during the entire existence of the furlough program. The following chart is representative of the pattern that would continue for the next twenty years.

The number of escapes continued to decrease to only 5 in the year 1987 when 5,859 furloughs were granted. It is important to note that there was not one rape or murder committed by a furloughed prisoner, including the hundreds of first degree lifers who participated in the program, until Willie Horton[2].

[1] More than one-third of all "escapes" during the furlough program were actually voluntary returns after the prescribed deadline, but within twenty-four hours.
[2] Willie Horton did not meet the criteria for being granted a furlough, but was granted one due to an administrative oversight (there is speculation that this was intentional, a reward for being an informant for the institution's Inner Perimeter Security personnel).

Not only were the furlough and work release programs phenomenally successful in preparing inmates for re-entry, and therefore promoting public safety, they were the strongest and most convincing argument a prisoner could make for commutation. The main criterion for commutation, as laid out in the Executive Clemency Guidelines, is that "the petitioner has made exceptional strides in self-development and self-improvement and would be a law-abiding citizen", something that cannot be effectively demonstrated without a step-down process developed and maintained through the Department of Correction. We can see the undeniable correlation between the termination of the furlough program (and for all intents and purposes, of lifers in minimum and pre-release facilities) and commutations:

Consequently, the DOC is now overwhelmed with hundreds of rehabilitated prisoners - potentially productive citizens - at an enormous cost to the taxpayers.
These numbers do not reflect a tough on crime initiative; they show a failure by the Massachusetts Department of Correction to ensure public safety through rehabilitation and effective re-entry.

Department of Correction Mission Statement and its Lack of Success

Two of the initiatives that apply to our present situation are (2) Establishing and enhancing a comprehensive re-entry program in partnership with other agencies and stakeholders, and (3) Providing inmate work, education, and research-based programming to create opportunities for positive behavioural change and to optimize community reparation.

To put it in short this is a failed mission, and it will continue to fail as long as long-term prisoners (especially first degree lifers) are ignored and excluded from the available rehabilitative and re-entry programs, because these prisoners are the prisoners that most greatly influence the attitudes, conduct, and social atmosphere at the medium and maximum facilities. Regardless of what the DOC mission statement says, let's be realistic - it is not in the interest of the DOC to reduce the prison population, since that would eliminate the need for correctional officers and administrative officials.

These intentions are made apparent when those like State Senator James Timilty (Chairman of the Joint Committee on Public Safety and Public Safety) makes statements such as "[I]t's in the best interest to see a low recidivism rate, but I think the mission is always to punish and protect." It is plain to see that the prison industry has become just that - an industrial complex where prisoners are warehoused and criminals manufactured. This is proven by the fact that the tools necessary lifers are being denied them. Institutional violence is at an all time low, which forces administrative officials to create new and harsher policies to instigate and provoke inmates into breaking the rules so that they can justify their desire to punish.

In his book, Violence: Our Deadly Epidemic and its Causes, James Gilligan, M.D., former Director for the Study of Violence at Harvard Medical School, states: [P]unishment is a form of violence in its own right, albeit a legally sanctioned one, but it's also a cause of violence as it stimulates the very same illegal violence that it is ostensibly intended to inhibit or prevent" (Gilligan 184 emphasis added). Dr. Gilligan, who is one of the world's foremost experts on violence and criminality, worked in the Massachusetts Department of Correction for over thirty years, and is the former Director of the Bridgewater State Hospital for the Criminally Insane. HE goes on to state in his book: "What is it about our social class system that holds in place a self-defeating policy of increasingly violent punishment when we have clearly demonstrated that such policies stimulate violence?" (Gilligan 185 emphasis added). Obviously the D.O.C.'s focus on increased punishment the last twenty years does not promote public safety; rather, it inhibits it.

The remedy to decrease the prison population is not high science. The DOC just has to pay attention to the recommendations that worked in the past. This raises the question: What it the true agenda of this administration? Is it rehabilitation and correction? Or is it job security for the correctional officers and their friends and families? Has the prison industry become the new family business, and in doing so, disenfranchised individuals and their families become its products and consumers?

The latter seems to be the case when analysed closely; between exorbitant prices for canteen, pre-paid phone rates, and clothing, DOC has become big business. The same ideology that prompted the correctional officers to accuse Commissioner Boone of "taking away [their] prisoners" still persists today. This is proven by the harsh policies implemented by the DOC that punish rather that correct behaviour. After 25 years of these harsh conditions, what will be released into your communities are not reformed men and women, but biological time bombs.

So where do you stand? Don't believe the hype and propaganda promoted by the DOC spin-doctors when in truth the inmates in their custody have made great strides in self-development and rehabilitation in spite of near absolute resistance from the powers that be. The prisoners here at OCCC have proved this: e.g. African Heritage Coalition (AHC) has just received an honorary award from the Boston City Council for its work for the community and with the youth.

So, who is really committing the crime? Is it the lifers running self-help programs that are reaching out to the community with its Behind the Walls video project and Real Talk writing campaign? Or is it the DOC who is implementing harsh policies that cause a breakdown in the family reunification initiative and pushing policies that will deny formerly validated "gang" members access to beneficial programs? Is it the lifers who are working diligently to better themselves, or the DOC who are excluding those lifers from ever participating in a step-down process to re-enter society in violation of their due process and equal protection right to be rehabilitated as guaranteed by MGL 124 [symbol] 1?

We the lifers of the Massachusetts Department of Correction petition you, the true stakeholders of society, to hold the DOC to its Mission Statement, and to demand transparency in their operation along with the implementation of an agenda that actually coincides with the successful Omnibus Prison Reform Act of 1972 (Chapter 777). The solution to decreasing crime and cleaning up the streets starts here, and we, the lifers of these facilities, are the pulse.

"Innocence Betrayed"... Interesting choice of words, coming from you. I hope they threw away the key.