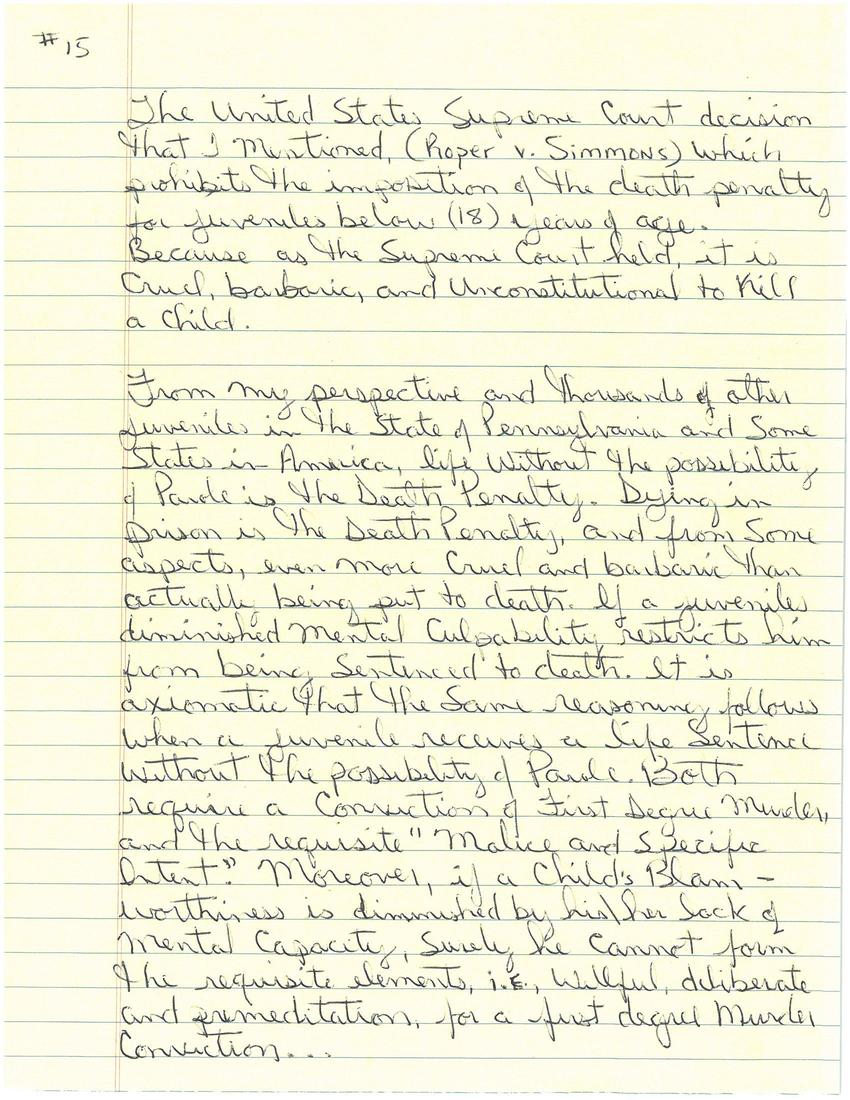 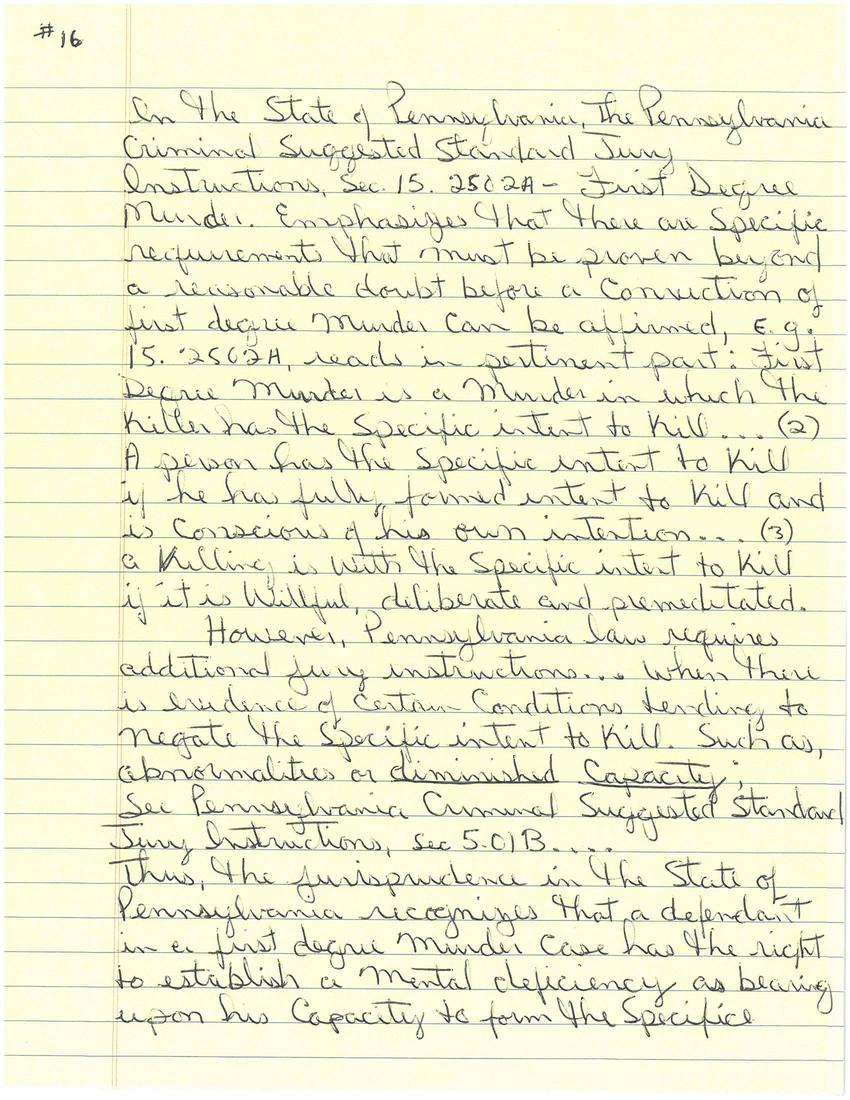 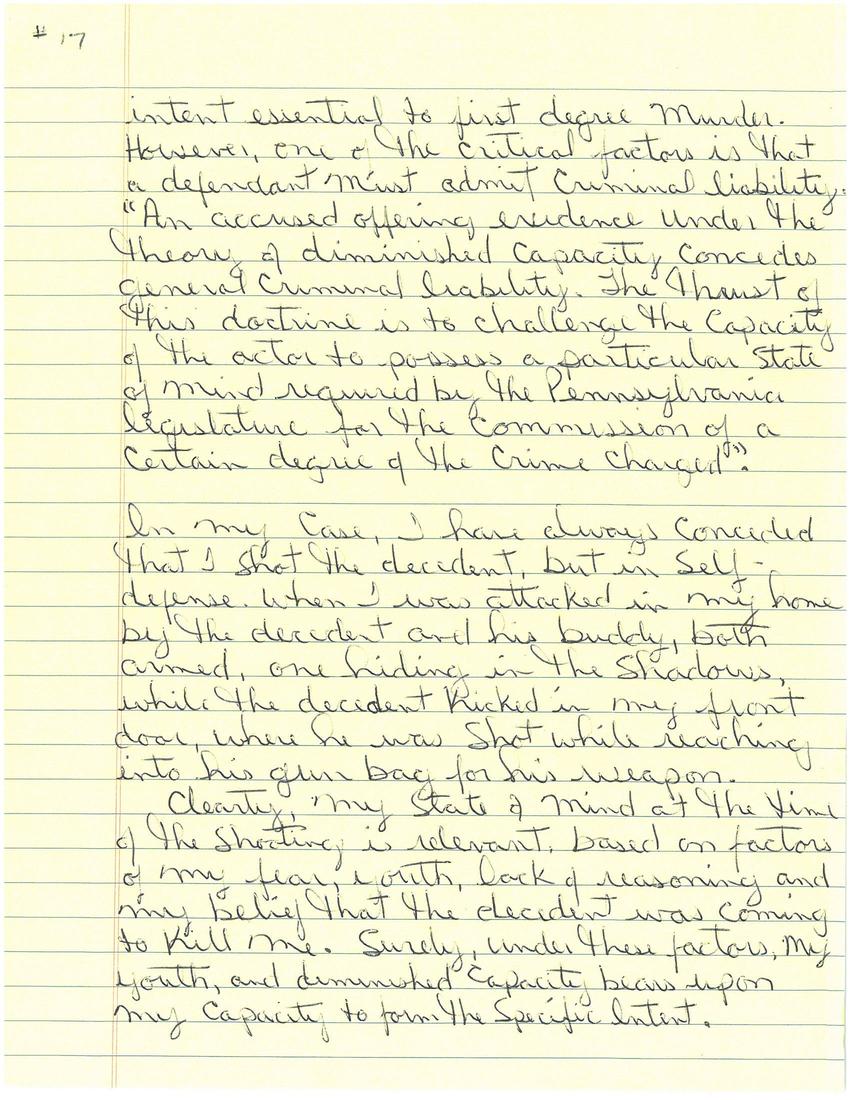 The United States Supreme Court decision that I mentioned (Roper v. Simmons) which prohibits the importation of the death penalty for juveniles below (18) years of age. Because as the Supreme Court held, it is cruel, and barbaric, and unconstitutional to kill a child.

From my perspective and thousands of other juveniles in the state of Pennsylvania and some states in America, life without the possibility of parole is the death penalty. Dying in prison is the death penalty, and from some aspects, even more cruel and barbaric than actually being put to death. If a juvenile diminished mental culpability restricts him from being sentenced to death. It is axiomatic that the same reasoning follows without the possibility of parole. Both require a conviction of first degree murder, and the requisite "Malice and specific intent." Moreover, if a child's blame-worthiness is diminished by his/her lack of mental capacity, surely he cannot form the requisite elements, i.e., willful, deliberate and premeditation, for a first degree murder conviction.
In the state of Pennsylvania, the Pennsylvania Criminal Suggested Standard Jury Instructions, Sec. 15. 250 2A- First Degree Murder. Emphasizes that there are specific requirements that must be proven beyond a reasonable doubt before a conviction of first degree murder can be affirmed, e.g.15. 2502H, reads in pertinent part: First-degree murder is a murder in which the killer has the specific intent to kill... (2) a person has the specific intent to kill if he has fully formed intent to kill and is conscious of his own intention... (3) a killing is with the specific intent to kill if it is willful, deliberate and premeditated.
However, Pennsylvania law requires additional jury instructions... when there is evidence of certain conditions tending to negate the specific intent to kill. Such as abnormalities or diminished capacity; Sec Pennsylvania Criminal Suggested Standard Jury Instructions, Sec 5.013...
Thus, the jurisprudence in the state of Pennsylvania recognizes that a defendant in a first-degree murder case has the right to establish a mental deficiency as bearing upon his capacity to form the specific intent essential to first degree murder. However, one of the critical factors is that a defendant must admit criminal liability. "An accused offering credence under the theory of diminished capacity concedes general communal liability. The least of this doctrine is to challenge the capacity of the actor to possess a particular state of mind required by the Pennsylvania legislature for the commission of a certain degree of the crime charged."

In my case, I have always coincided that I shot the decedent, but in self-defense. When I was attacked in my home by the decedent and his buddy, both armed, one hiding in the shaodws, while the decedent kicked in my front door, where he was shot while reaching into his gun bag for his weapon.
Clearly, my state of mind at the time of the shooting is relevant, based on factors of my fear, faith, lack of reasoning and my belief that the decedent was coming to kill me. Surely, under these factors, my youth, and diminished capacity bears upon my capacity to form the specific intent.