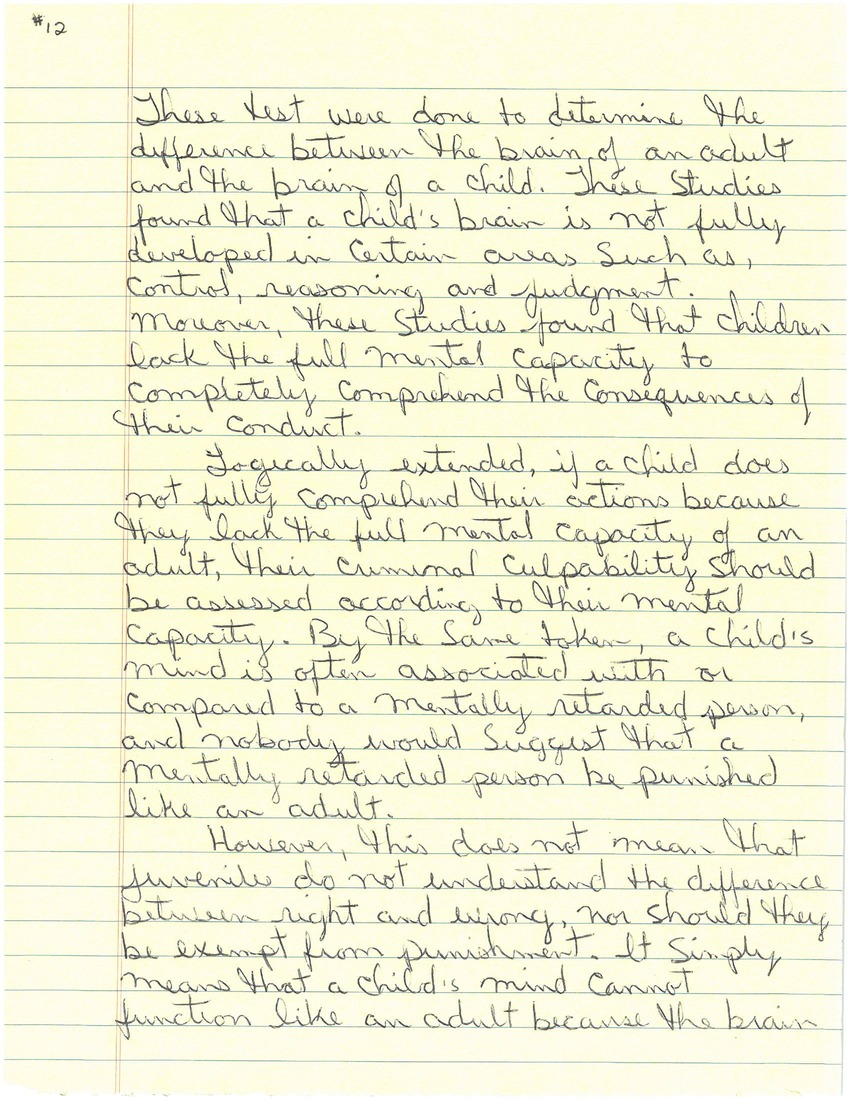 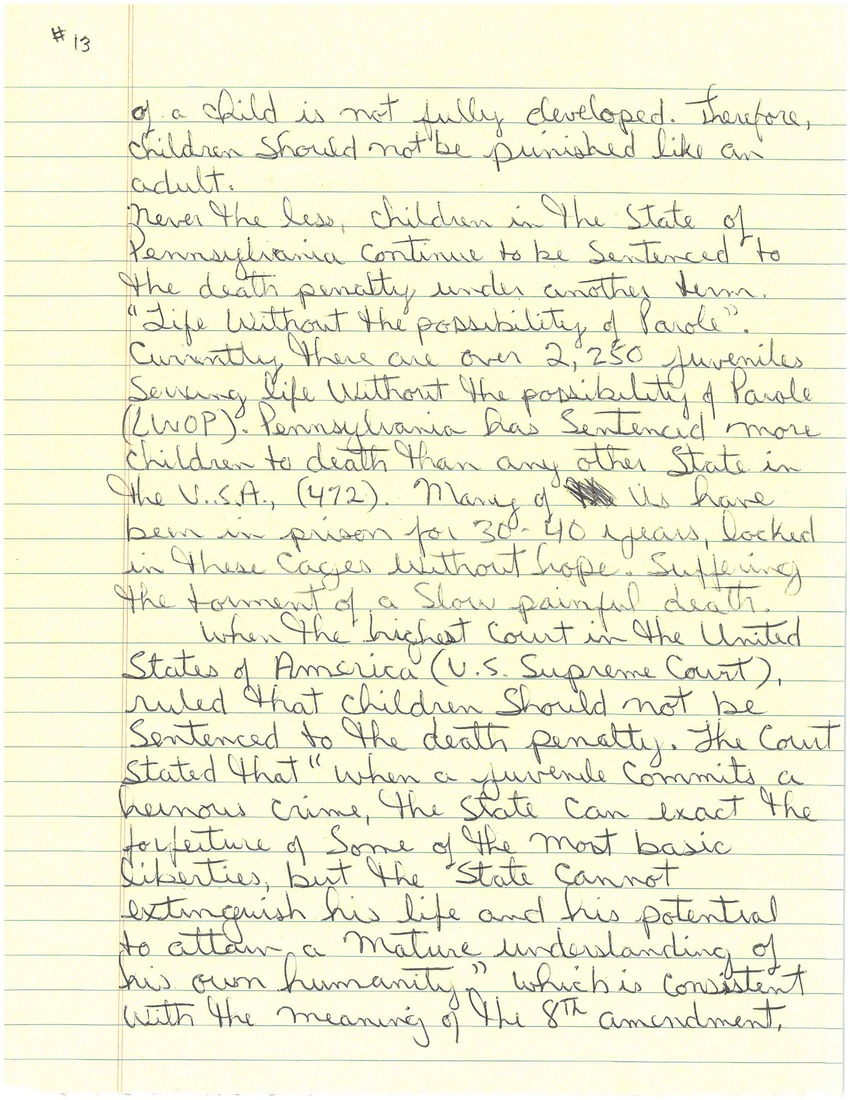 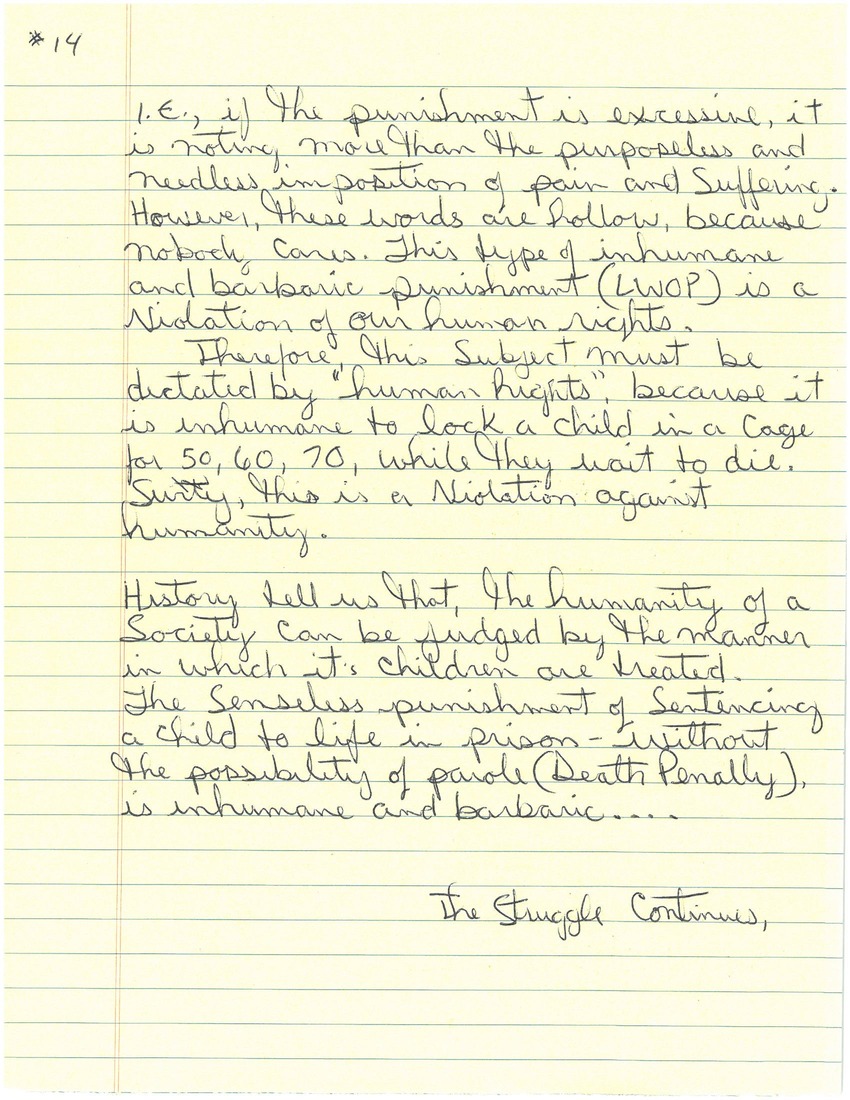 Logically extended, if a child does not fully comprehend their actions because they lack the full mental capacity of an adult, their criminal culpability should be assessed according to their mental capacity. By the same token, a child's mind is often associated with or compared to a mentally retarded person, and nobody would suggest that a mentally retarded person be punished like an adult.

However, this does not mean that juvenile do not understand the difference between right and wrong, nor should they be exempt from punishment. It simply means that a child's mind cannot function like an adult because the brain of a child is not fully developed. Therefore, children should not be punished like an adult.

Nevertheless, children in the state of Pennsylvania continue to be sentenced to the death penalty under another term, life without the possibility of parole. Currently, there are over 2,250 juveniles serving life without the possibility of parole (LWOP). Pennsylvania has sentenced more children to death than any other state in the U.S.A. (472). Many of us have been in prison for 30-40 years, locked in these cages without hope. Suffering the torment of a slow painful death.

When the highest court in the United States of America (U.S. Supreme Court) rule that children should not be sentenced the death penalty, the court stated that, "When a juvenile commits a heinous crime, the state can exact the forfeiture of some of the most basic liberties, but the state cannot extinguish his life and his potential to attain a mature understanding of his own humanity," which is consistent with the meaning of the 8th Amendment. i.e. if the punishment is excessive, it is nothing more than the purposeless and needless imposition of pain and suffering.

However, these words are hollow because nobody cares. This type of inhumane and barbaric punishment (LWOP) is a violation of our human rights.

Therefore, this subject must be dictated by human rights because it is so inhumane to lock a child in a cage for 50, 60, 70 years while they wait to die. Surely, this is a violation against humanity.

History tells us that the humanity of a society can be judged by the manner in which its children are treated. The senseless punishment of sentencing a child to life in prison without the possibility of parole is inhumane and barbaric.