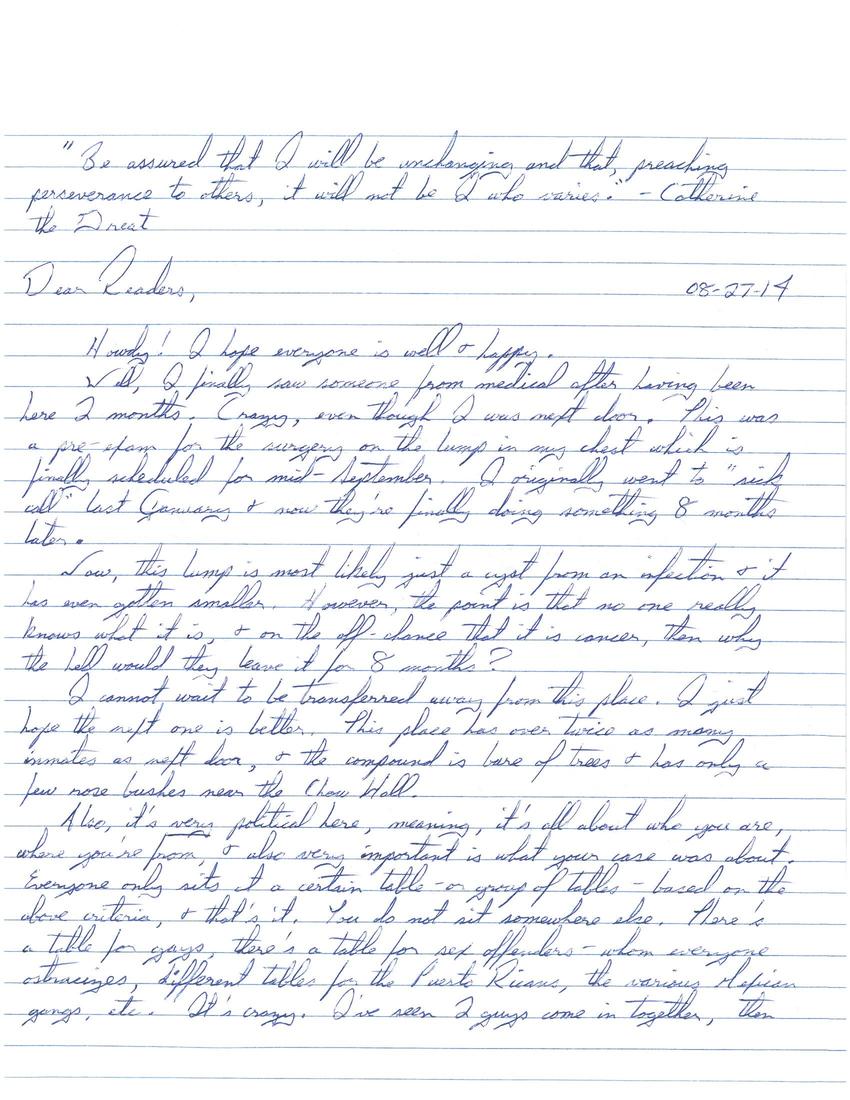 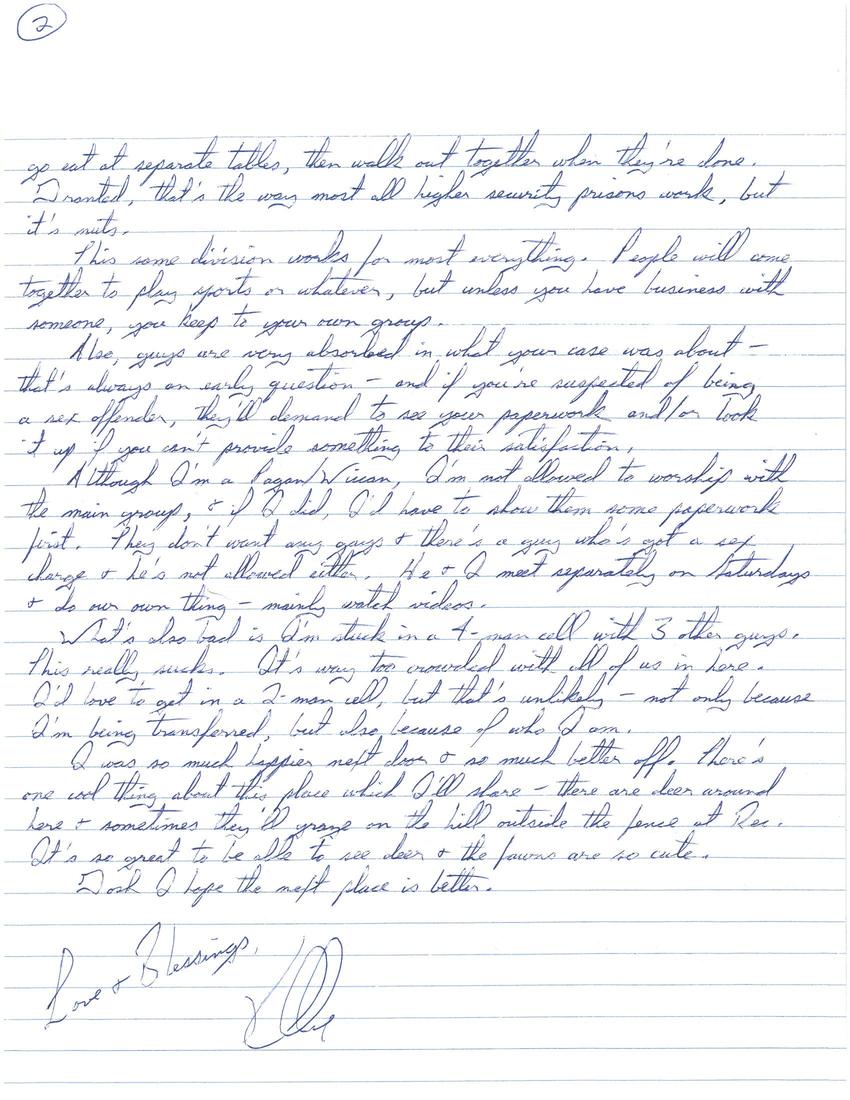 "Be assured that I will be unchanging and that, preaching perseverance to others, it will not be I who varies." —Catherine the Great

Dear Reader,
Howdy! I hope everyone is well and happy.

Well, I finally saw someone from medical after having been here two months. Crazy, even though I thought I was next door. This was a pre-exam for the surgery on the lump in my chest, which is finally scheduled for mid-September. I originally went to "sick call" last January and now they're finally doing something eight months later.

Now, this lump is most likely just a cyst from an infection and it has gotten smaller. However, the point is that no one really knows what it is, and on the off-chance that it is cancer, then why the hell would they leave it for eight months?

I cannot wait to be transferred away form this place. I just hope the next one is better. This place has over twice as many inmates as next door, and the compound is bare of trees and only has a few rose bushes near the Chow Hall.

Also, it's very political here. Meaning, it's all about who you are, where you've been, and—also very important—is what your case was about. Everyone only sits it a certain table—or group of tables—based on the above criteria, and that's it. You do not sit somewhere else. There's a table for gays, there's a table for sex offenders—whom everyone ostracizes—, different tables for the Puerto Ricans, the various Mexican gangs, etc. it's crazy. I've seen two guys come in together, then go eat at separate tables, then walk out together when they're done. Granted, that's the way most all higher security prisons work, but it's nuts.

This same division works for most everything. People will come together to play yorts or whatever, but unless you have business with someone, you keep to your own group.

Also, guys are very absorbed in what your case was about—that's always an early question—and if you're suspected of being a sex offender, they'll demand to see your paperwork and/or look it up if you can't provide something to their satisfaction.

Although I'm a Pagan/Wiccan, I'm not allowed to worship with the main group. If I did, I'd have to show them some paperwork first. They don't want any gays; there's a guy who's got a sex charge and he's not allowed either. He and I meet separately on Saturdays and do our own things—mainly watch videos.

What's also bad is I'm stuck in a four-man cell with three other guys. This really sucks. It's way too crowded with all of us in here. I'd love to get in a two-man cell, but that's unlikely—not only because I'm being transferred, but also because of who I am.

I was so much happier next door and so much better off. There's one cool thing about this place which I'll share—there are deer around here and sometimes they'll graze on the hill outside the fence at Rec. It's so great to be able to see deer, and the fawns are so cute.

Gosh, I hope the next place is better.

Loved to read your story. Actually you've a nice style of writing, Kelly.

Also remark with interest your sentence above your letter! :)

I am glad you could leave the worries about that lump behind! Always adapting to other environments, Kelly!Well, it shapes your character in the meantime, I suppose?

What an ajustment again; different groups, at same tables, not allowed in certain groups... And I see how nicely you joined that other man, also not wellcomed; that's just you; being open for others and about being flexible. ;)
Proves only you are wise, Kelly.
Times czn change though. More in your likings.

So, do you have to be replaced once more! I am surprised you can look in someone's case?!

4 people in one cell... that sounds crowdy! Who is in your cell? Hopefully you get somewhat well with the others.And the snoring??

Deer.... they do give god energy, Kelly. Must be a mighty sight!
Is the food great?

George's case now.They were planning to pay the hefty price for that expert to test his psychological state. The man a lot in demand! could make himselgf free on the 18th of Decmeber.in
(sorry it flipped away!)... himself free only on the 18th of December.
But now the prison has been less than cooperative!! Why?? Nobody knows? 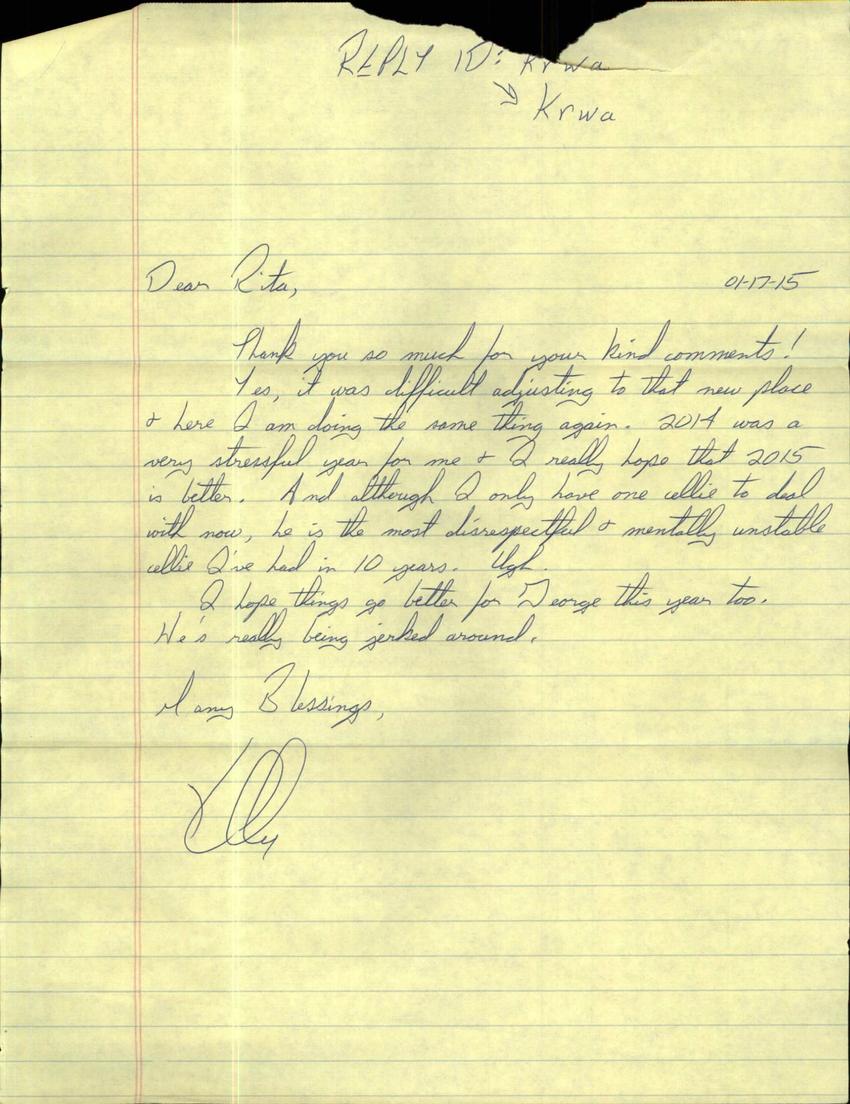