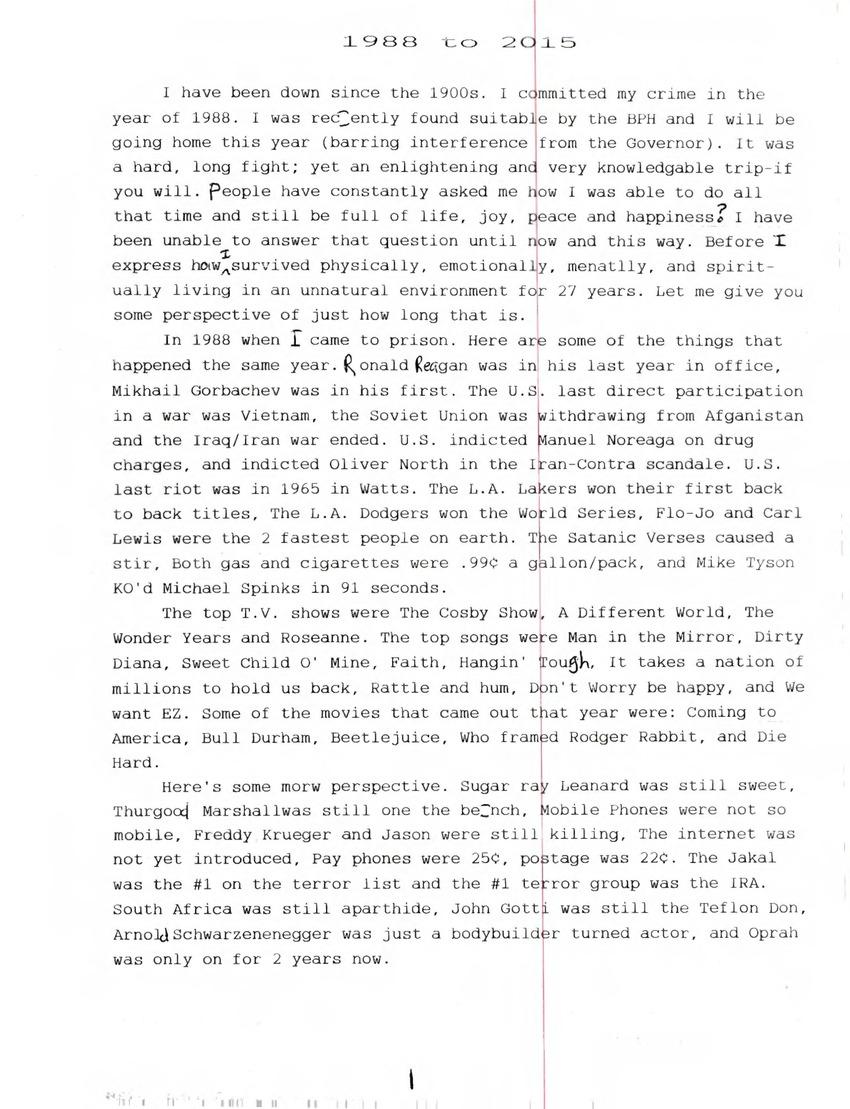 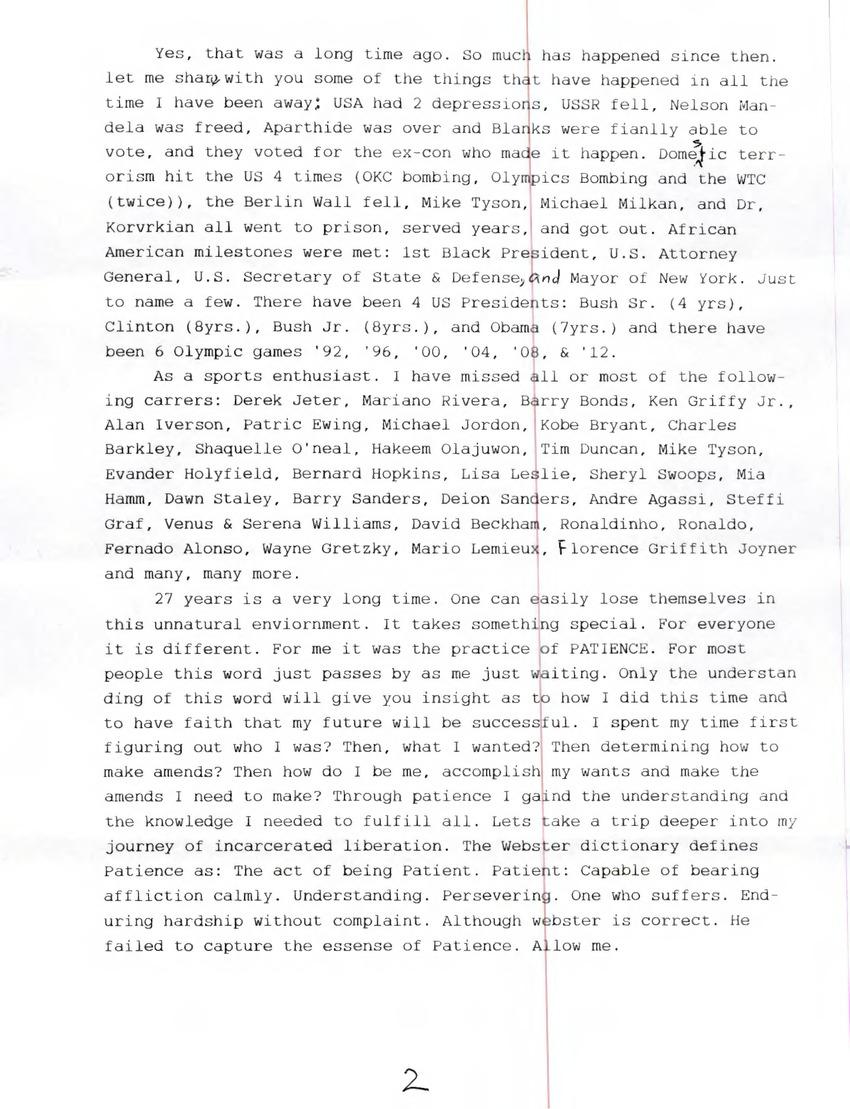 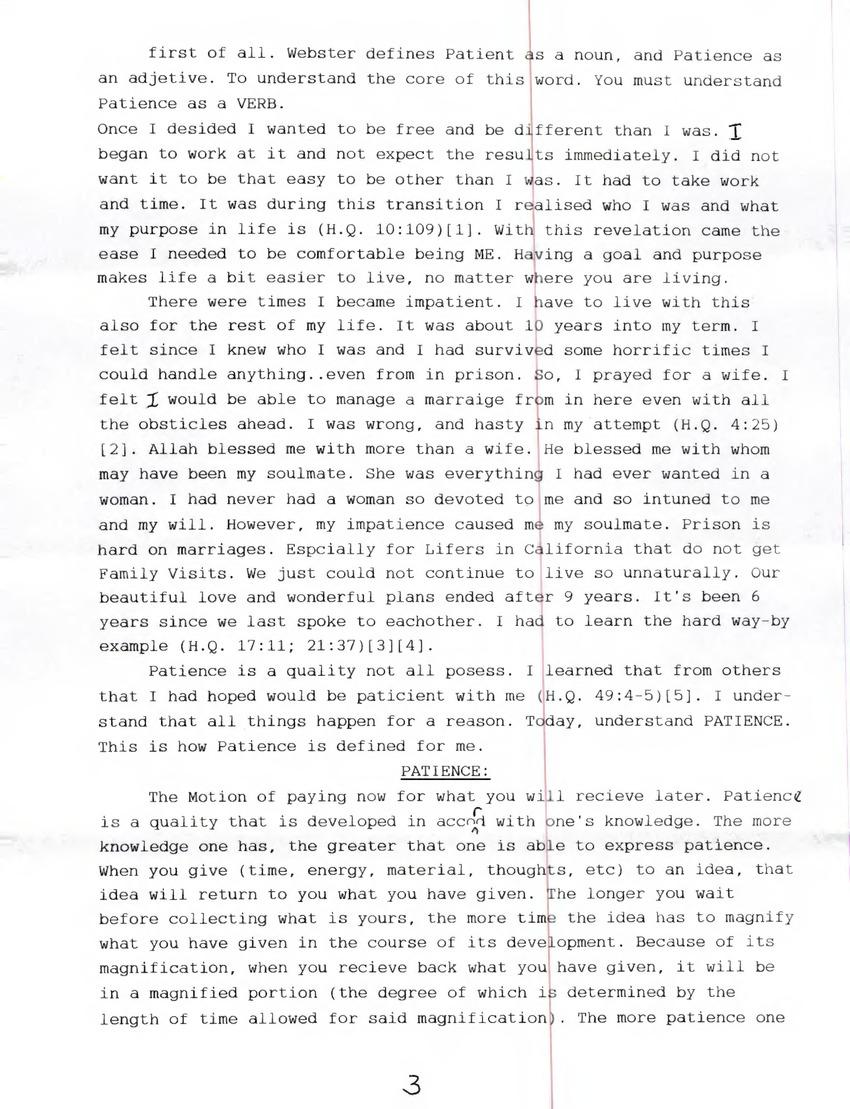 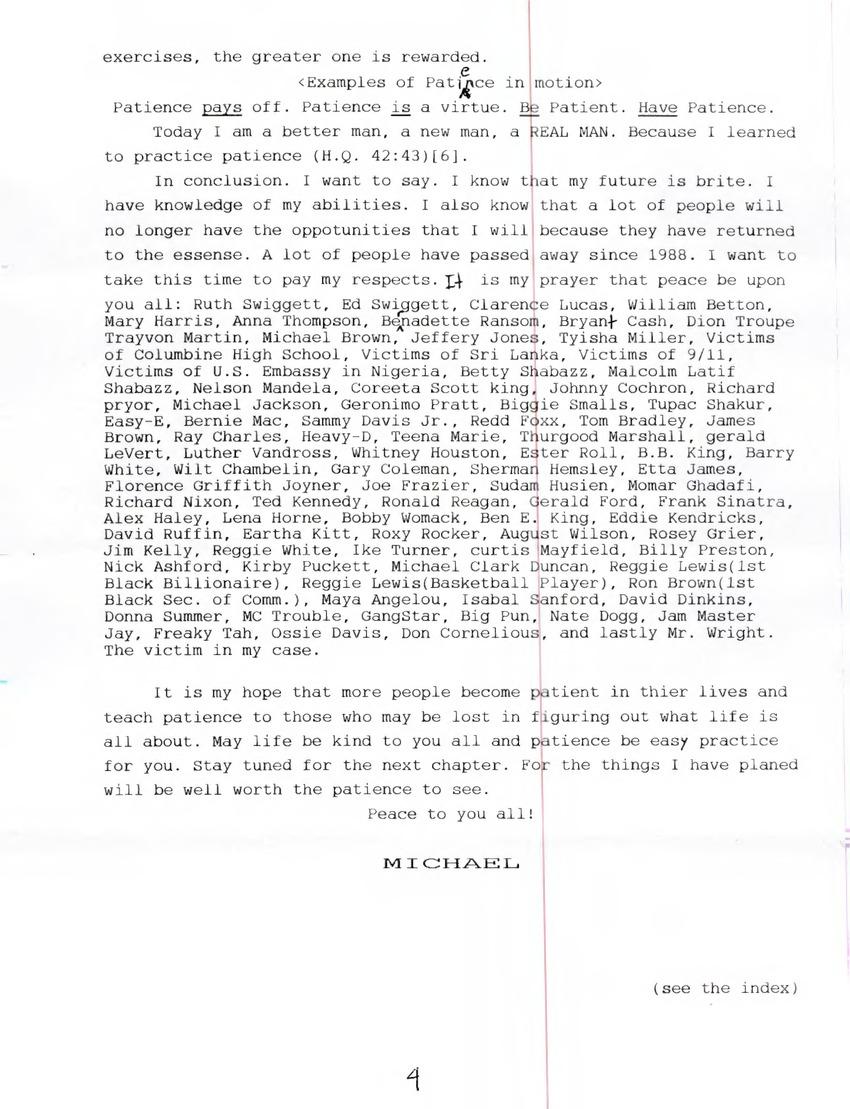 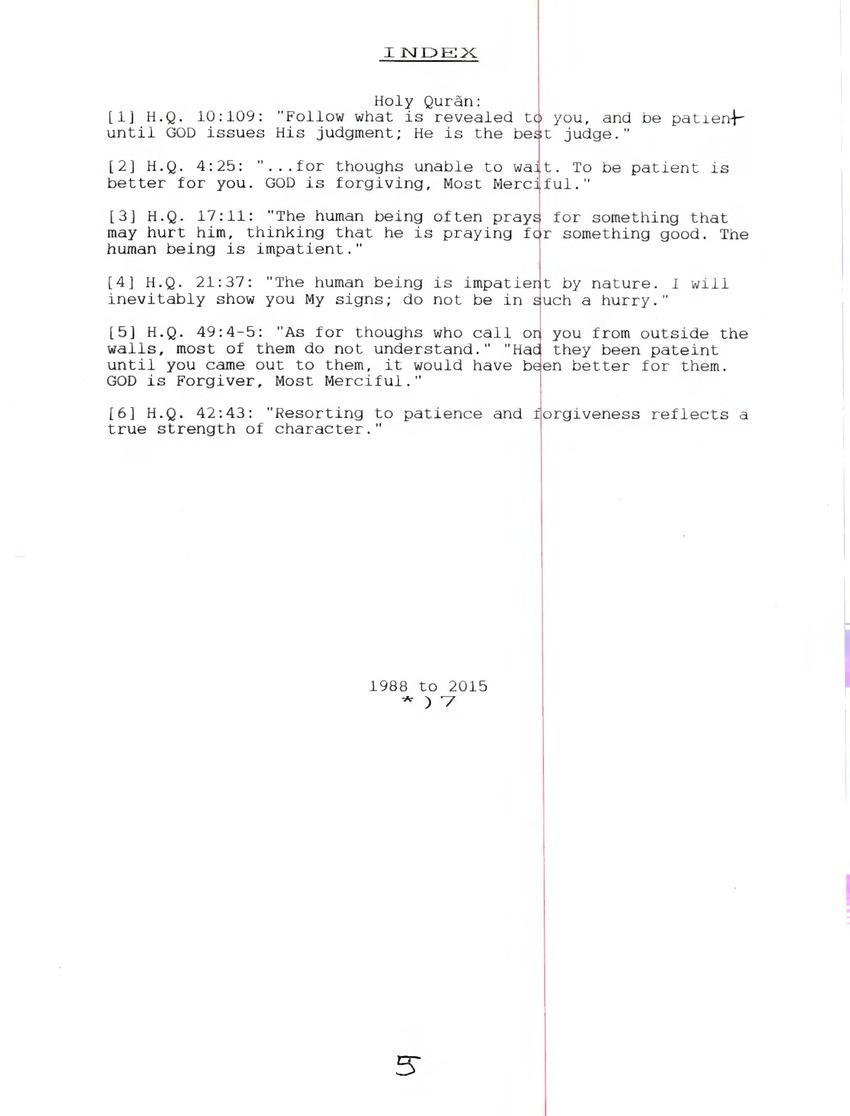 I have been down since the 1900s. I committed my crime in the year of 1988. I was recently found suitable by the BPH and I will be going home this year (barring interference from the Governor). It was a hard, long fight; yet an enlightening and very knowledgeable trip-if you will. People have constantly asked me how I was able to do all that time and still be full of life, joy, peace and happiness? I have been unable to answer that question until now and this way. Before I express how I survived physically, emotionally, mentally, and spiritually living in an unnatural environment for 27 years. Let me give you some perspective of just how long that is.

In 1988 when I came to prison. Here are some of the things that happened the same year. Ronald Reagan was in his last year in office, Mikhail Gorbachev was in his first. The U.S. last direct participation in a war was Vietnam, the Soviet Union was withdrawing from Afghanistan and the Iraq/Iran war ended. U.S. indicted Manuel Noreaga on drug charges, and indicted Oliver North in the Iran-Contra scandal. U.S.'s last riot was in 1965 in Watts. The LA Lakers won their first back-to-back titles. The LA Dodgers won the World Series. Flo-Jo and Carl Lewis were the two fastest people on Earth. The Satanic Verses caused a stir. Both gas and cigarettes were 99 cents a gallon/pack, and Mike Tyson KO'd Michael Spinks in 91 seconds.

The top TV shows were The Cosby Show, A Different World, The Wonder Years, and Roseanne. The top songs were "Man in the Mirror", "Dirty Diana", "Sweet Child O' Mine", "Faith", "Hangin' Tough", "It takes a nations of millions to hold us back", "Rattle and Hum", "Don't Worry By Happy", and "We want EZ". Some of the movies that came out that year were Coming to America, Bull Durham, Bettlejuice, Who Frame Roger Rabbit, and Die Hard.

Here's some more perspective. Sugar Ray Leanard was still sweet, Thurgood Marshall was still on the bench. Mobil phones were not so mobile. Freddy Krueger and Jason were still killing. The Internet was not yet introduced. Pay phones were 25 cents, postage was 22 cents. The Jakal was #1 on the terror list, and the #1 terror group was the IRA. South Africa was still apartheid. John Gotti was still the Telfon Don. Arnold Schwarzenegger was just a bodybuilder turned actor. Oprah was only on for two years now.

Yes, that was a long time ago. So much has happened since then. Let me share with you some of the things that have happened in all the time I have been away.

USA had two depressions. USSR fell. Nelson Mandela was freed. Apartheid was over, and Blanks was finally able to vote. They voted for the ex-con who made it happen. Domestic terrorism hit the US four times (OKC bombing, Olympics bombing, and the WTC twice). The Berlin Wall fell. Mike Tyson, Michael Milkan, and Dr. Korvrkian all went to prison, served years, and got out. African-American milestones were met: first black president, U.S. Attorney General, US Secretary of State and Defense, and Mayor of New York—just to name a few. There have been four US presidents: Bush Sr., Clinton, Bush Jr., and Obama, and there have been six Olympic games.

27 is a very long time. One can easily lose themselves in this unnatural environment. It takes something special. For everyone, it is different. For me, it was the practice of PATIENCE. For most people, this word just passes by as me just waiting. Only the understanding of this word will give you insight as to how I did this time and to have faith that my future will be successful.

I spent my time first figuring out who I was. Then what I wanted. Then determining how to make amends. Then how do I be me, accomplish my wants, and make the amends I needed to make. Through patience, I gained the understanding and the knowledge I needed to fulfill all.

Let's take a trip into my journey of incarcerated liberation. The Webster Dictionary defines patience as: "The act of being patient." Patient: "capable of bearing affliction calmly. Understanding. Persevering. One who suffers. Enduring hardship without complaint." Although Webster is correct, he failed to capture the essence of patience. Allow me.

First of all, Webster defines "patient" as a noun, and "patience" as an adjective. To understand the core of this word, you must understand patience as a VERB.

Once I decided I wanted to be free and be different than I was, I began to work at it and not expect the results immediately. I did not want it to be that easy to be other than I was. It had to take work and time. It was during this transition that I realized who I was and what my purpose in life is (H.Q. 10:109[1]). With this revelation came the ease I needed to be comfortable being ME. Having a goal and purpose makes life a bit easier to live, no matter where you are living.

There were times when I became impatient. I have to live with this too for the rest of my life. It was about ten years into my term. I felt since I knew who I was and I had survived some horrific times, I could handle anything—even from prison. So I prayed for a wife. I felt I would be able to manage a marriage from in here, even with all the obstacles ahead. I was wrong and hasty in my attempt (H.Q. 4:25[2]). Allah blessed me with more than a wife. He blessed me with whom may have been my soulmate. She was everything that I had ever wanted in a woman. I had never had a woman so devoted to me and so in-tuned to me and my will.

However, my impatience caused me my soulmate. Prison is hard on marriages. Especially for lifers in California who do not get family visits. We just could not continue to live so unnaturally. Our beautiful love and wonderful plans ended nine years. It's been six years since we last spoke to each other. I had to learn the hard way, by example (H.Q. 17:11; 24:37[3][4]).

Patience is a quality not all possess. I learned that from others that I had hoped would be patient with me (H.Q. 49:4-5[5]). I understand that all things happen for a reason. Today, understand PATIENCE. This is how patience is defined for me.

Patience:
The motion of paying now for what you will receive later. Patience is a quality that is developed in accord with one's knowledge. The more knowledge one has, the greater that one is able to express patience. When you give (time, energy, material, thoughts, etc.) to an idea, that idea will return to you what you have given. The longer you wait before collecting what is yours, the more the idea has to magnify what you have given in the course of its development. Because of its magnification, when you receive back what you have given, it will be in a magnified portion (the degree of which is determined by the length of time allowed for said magnification). The more patience one exercises, the greater one is rewarded.

Examples of patience in motion: Patience pays off. Patience is a virtue. Be patient. Have patience.

In conclusion, I want to say that I know my future is bright. I have knowledge of my abilities. I also know that a lot of people will no longer have the opportunities that I will because they have returned to the essence. A lot of people have passed away since 1988. I want to take this time to pay my respects.

It is my hope that more people become patient in their lives and teach patience to those who may be lost in figuring out what life is all about. May life be kind to you all and patience be easy practice for you. Stay tuned for the next chapter, for the things I have planned will be well worth the patience to see.

Peace to you all!
MICHAEL

[5] H.Q. 49:4-5: "As for thoughts who call on you from outside the walls, most of them do not understand." "Had they been patient until you came out to them, it would have been better for them. God is Forgiver, Most Merciful."

[6] H.Q. 42:43: "Resorting to patience and forgiveness reflects a true strength of character."