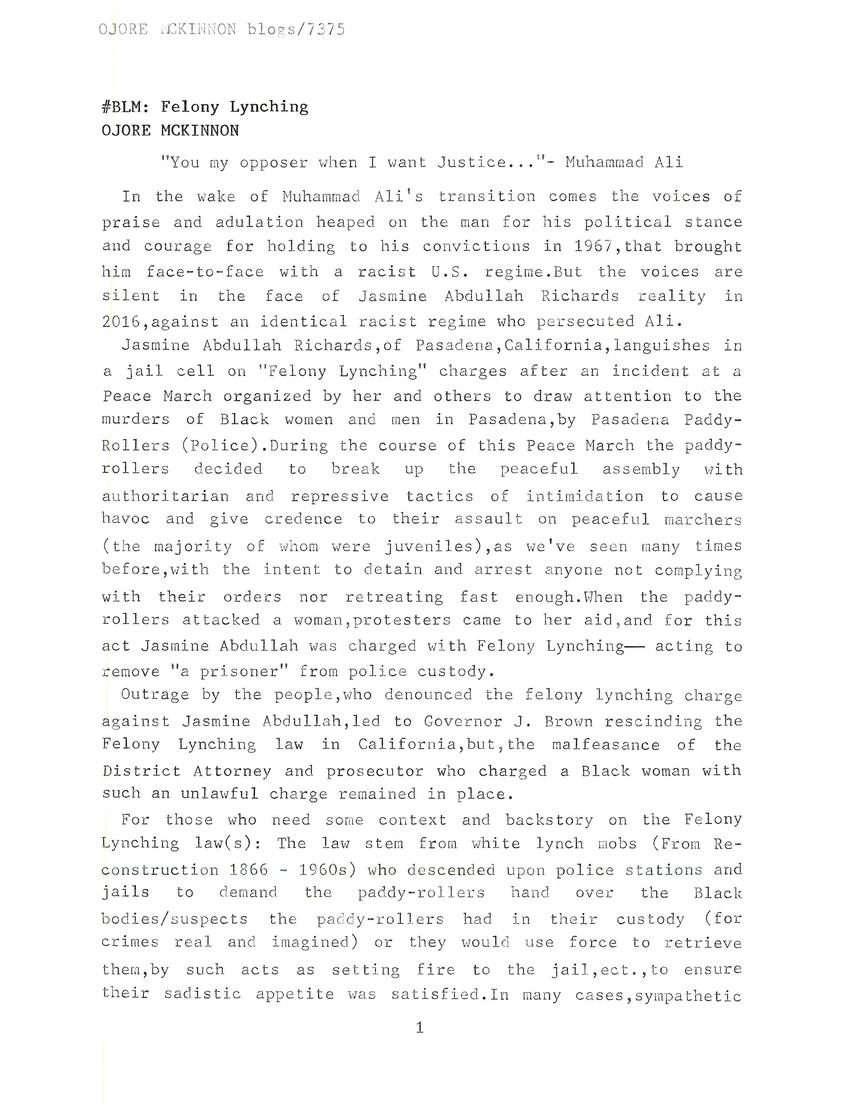 "You my opposer when I want Justice..."- Muhammed Ali

In the wake of Muhammad Ali's transition comes the voices of praise and adulation heaped on the man for his political stance and courage for holding to his convictions in 1967, that brought him face-to-face with a racist U.S. regime. But the voices are silent in the face of Jasmine Abdullah Richards reality in 2016, against an identical racist regime who persecuted Ali.

Jasmine Abdullah Richards, of Pasadena, California, languishes in a jail cell on "Felony Lynching" charges after an incident at a Peace March organized by her and others to draw attention to the murders of Black women and men in Pasadena, by Pasadena Paddy-Rollers (Police). During the course of this Peace March the paddy-rollers decided to break up the peaceful assembly with authoritarian and repressive tactics of intimidation to cause havoc and give credence to their assault on peaceful marchers (the majority of whom were juveniles), as we've seen many times before, with the intent to detain and arrest anyone not complying with their orders nor retreating fast enough. When the paddy-rollers attacked a woman, protesters came to her aid, and for this act Jasmine Abdullah was charged with Felony Lynching - acting to remove "a prisoner" from police custody.

Outrage by the people, who denounced the felony lynching charge against Jasmine Abdullah, led to Governor J. Brown rescinding the Felony Lynching law in California, but, the malfeasance of the District Attorney and prosecutor who charged a Black woman with such an unlawful charge remained in place.

For those who need some context and backstory on the Felony Lynching law(s): The law stems from white lynch mobs (From Reconstruction 1866-1960s) who descended upon police stations and jails to demand the paddy-rollers hand over the Black bodies/suspects the paddy-rollers had in their custody (for crimes real and imagined) or they would use force to retrieve them, by such acts as setting fire to the jail, etc., to ensure their sadistic appetite was satisfied. In many cases, sympathetic to the lynch mob the paddy-rollers complied with their demands.

In the case of Jasmine Abdullah, there was no white mob, no intent to lynch anyone nor to de-arrest anyone. If anything, it was an attempt to free the woman from being brutally assaulted and wrongfully arrested for exercising her constitutional right to assemble by rogue paddy-rollers, who she knew very well and was now publicly denouncing for their brutality and murderous tactics. Essentially, the absurdity of the charge is a law designed to protect Black Lives/bodies is now being applied to persecute, condemn and imprison a Black woman standing up for Black Lives. The focus of the regime is on squashing Black political dissent and resistance. The days of outsourcing their lynching is antiquated, today the act is regulated to criminals of law enforcement and those within the injustice system. This way all acts of lynching can be deemed justified and lawful.

Found guilty, and facing up to four years in prison, on June 7, 2016, Jasmine Abdullah Richards was sentenced to 90 days in jail with 18 days served and 3 years' probation. Like Ali, she was in reality found guilty of rebellion; and for adhering to the ideology of Harriet Tubman, 'leave no [woman] behind.'

No, there will never be another Ali of Ida B. Wells, but there is a Jasmine Abdullah, fighting for Black Lives and we can stand with her in this era of BP/BLM struggle. All those who honor Ali in death let us honor, praise and be active in the struggle with Jasmine Abdullah in life and, every individual standing strong in the fight against a regime who oppose our equality, justice and freedom. Don't just pay lip service to a bygone era, get involved, the struggle is real and has never subsided. If you can't acknowledge or praise this Sistah Souljah for standing up for her political convictions, as Ali once said "You my opposer... you won't stand up for me right here at home!"

ab-Salute to my Sistah; asante for your service! Remain steadfast in your BLACK LIVES MATTER convictions.

From my stance on Maa, a voice from Deathrow.

Thank you very much for taking your time to write this and share the stories of some lives we may not hear. It was a moving time with the passing of Muhammed Ali which sent shockwaves around the world but in his life he inspired many others to follow his ideals and way of thinking. This was a very interesting read and brought forward a story I had never heard before 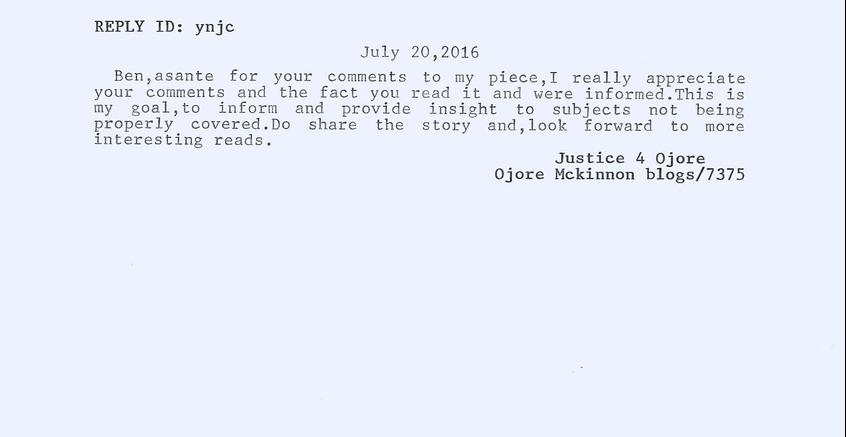 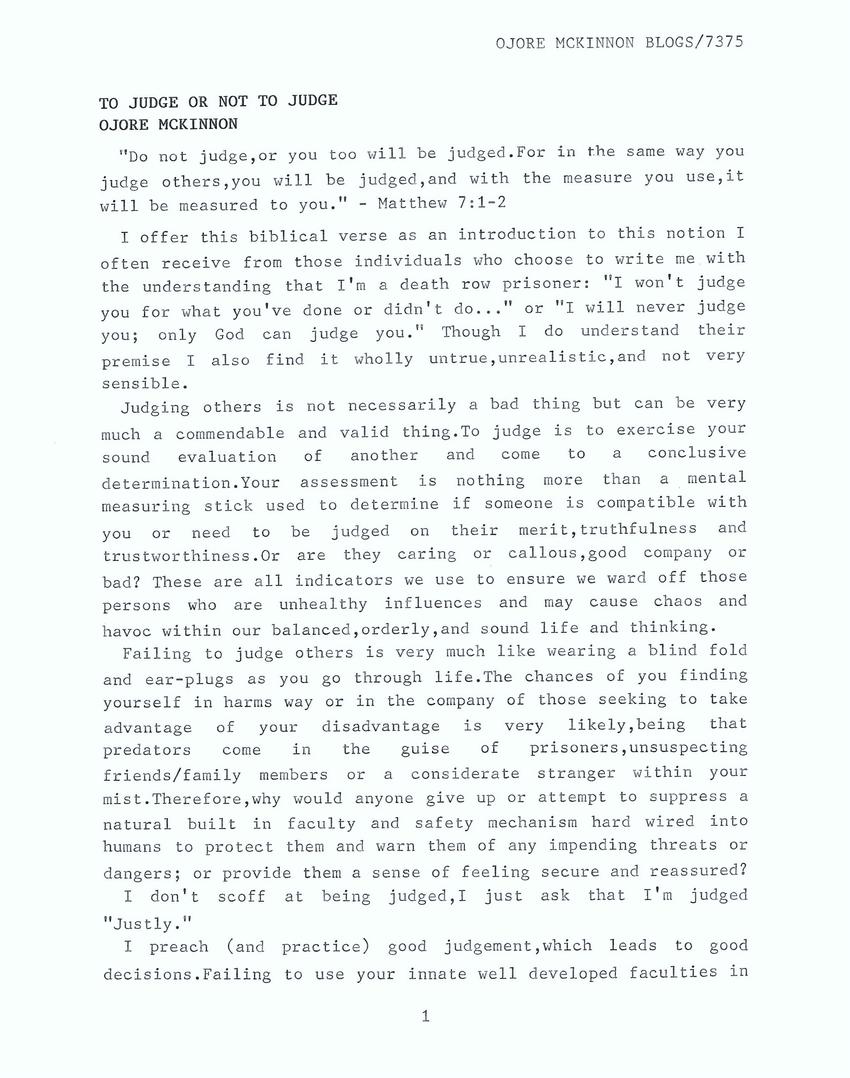 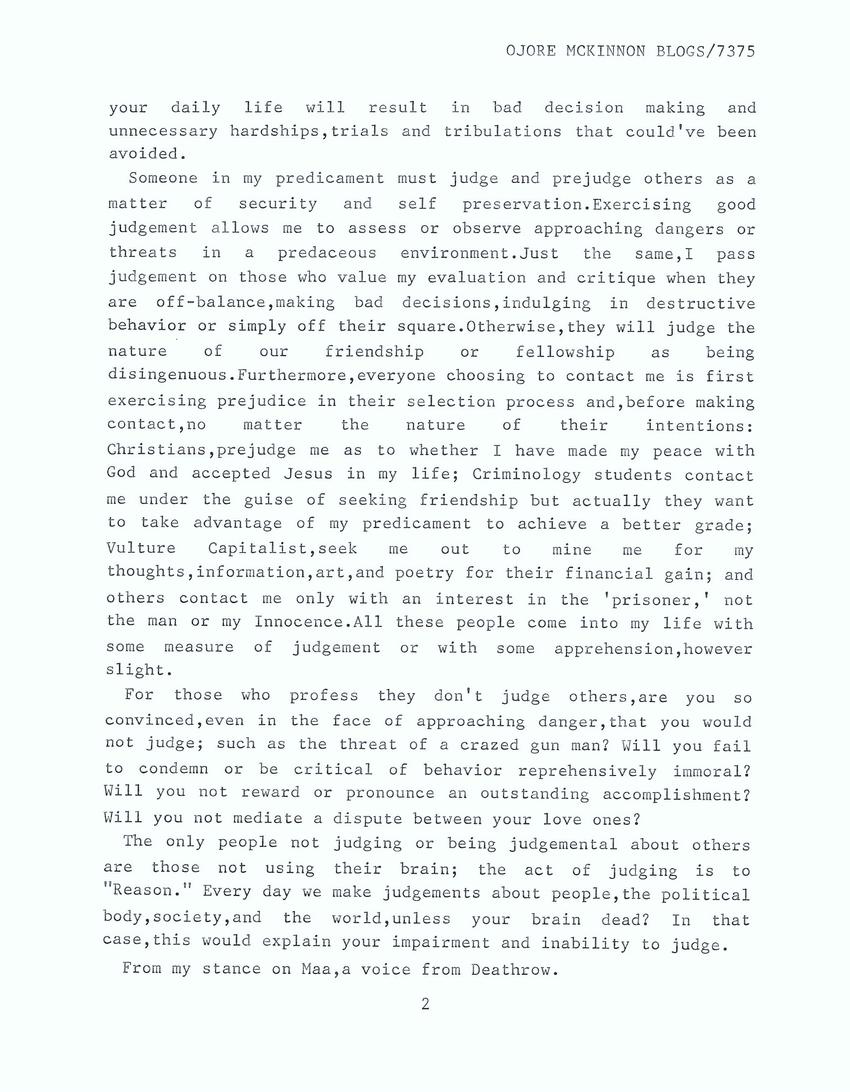 Thank you for this thought provoking piece. I wonder if the Bible quote should be than: judge wisely... etc. Who knows what got lost in translation. But I guess I get your point.
I do not judge has a layer of I do not relate, an absence of relationship.
Take Care, Ju
(scanned reply – view as blog post)
uploaded Sept. 20, 2016.  Original (PDF)