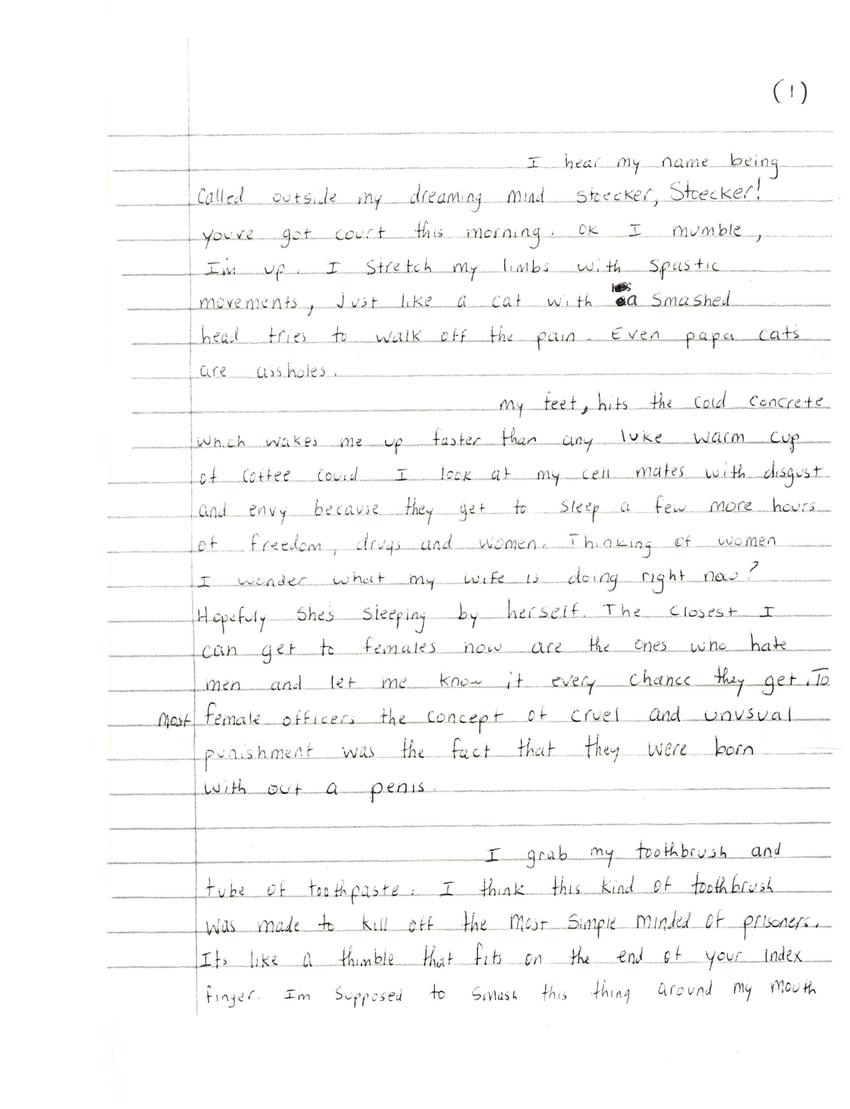 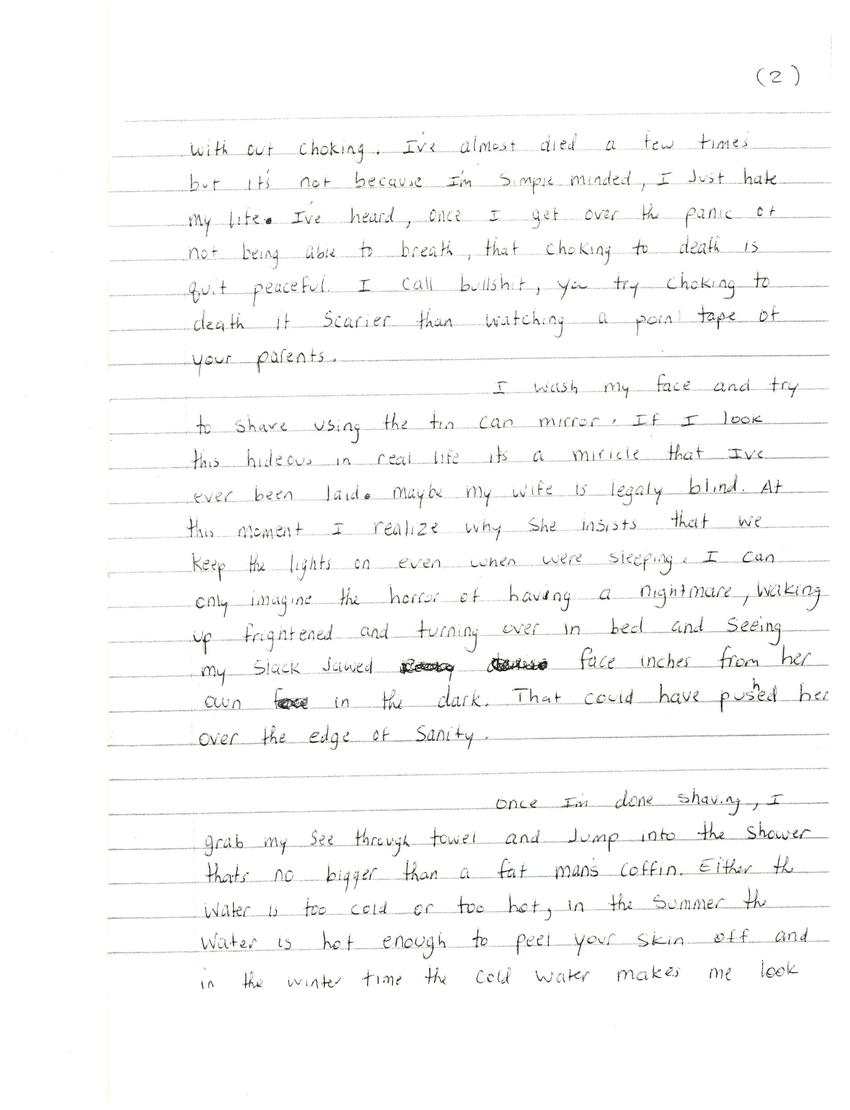 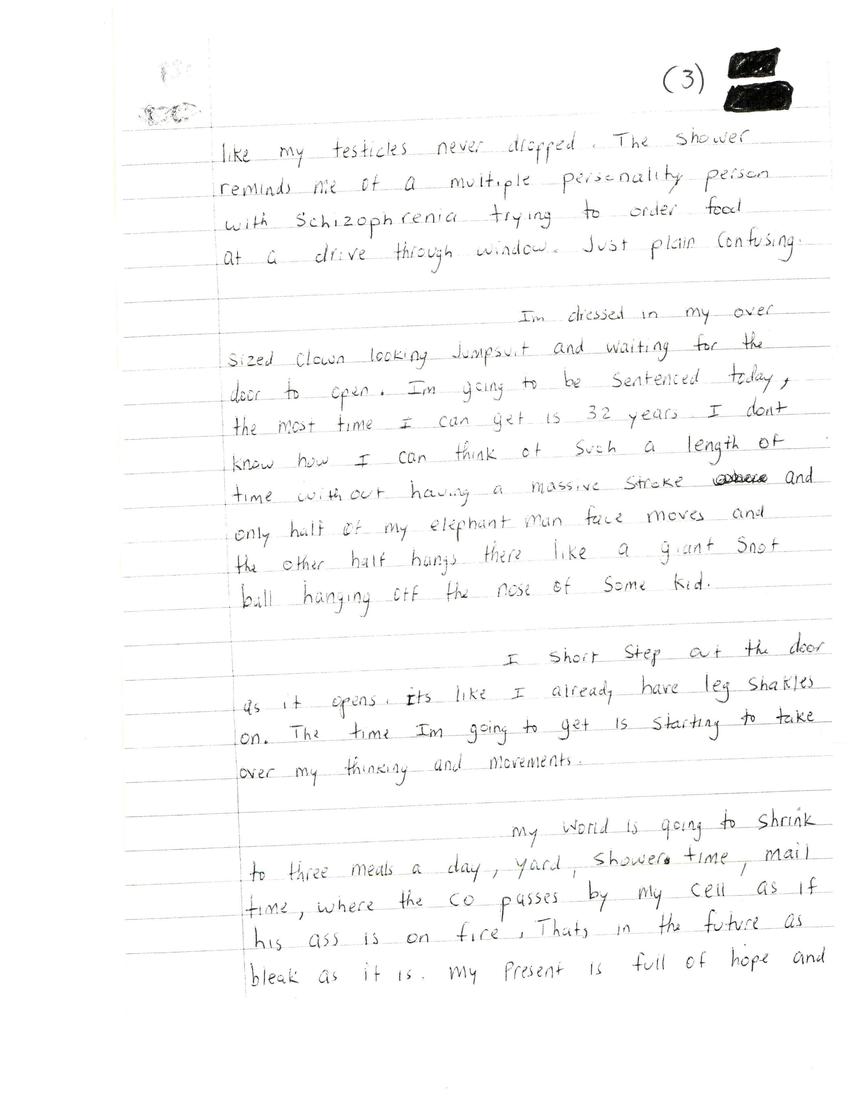 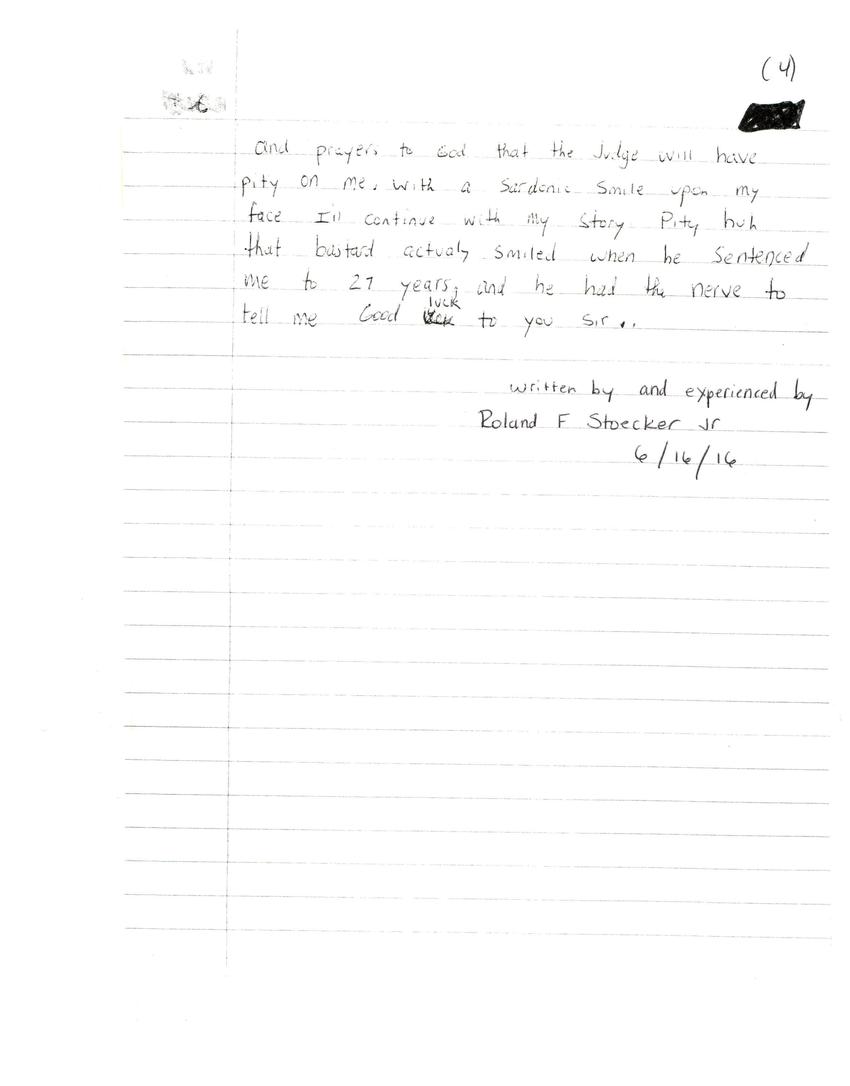 I hear my name being called outside my dreaming mind, Stoecker, Stoecker! You've got court this morning. Okay, I mumble. I'm up. I stretch my limbs with spastic movements. Just like a cat with a smashed head tries to walk off the pain. Even papa cats are assholes.
My feet, hits the cold concrete which wakes me up faster than any lukewarm cup of coffee could. I look at my cell mater with disgust and envy because they get to sleep a few more hours of freedom, drugs and women. Thinking of women. I wonder what my wife is doing right now? Hopefully sh's sleeping by herself. The closest I can get to females now are the ones who hate men and let me know it every chance they get. To most female officers the concept of cruel and unusual punishment was the fast that they were born without a penis.
I grab my toothbrush and tube of toothpaste. I think this kind of toothbrush was made to kill off the most simple minded of prisoners. Its like a thimble that fits on the end of your index finger. I'm supposed to smash this thing around my mouth without choking. I've almost died a few times but it's not because I'm simple minded, I just hate my life. I've heard, once I get over the panic of not being able to breathe, that choking to death is quite peaceful. I call bullshit, you try choking to death. It's scarier than watching a porn tape of your parents.
I wash my face and try to shave using the tin can mirror. If I look this hideous in real life, it's a miracle that I've ever been laid. Maybe my wife is legally blind. At this point I realize why she insists that we keep the light on, even when we're sleeping. I can only imagine the horror of having a nightmare, waking up frightened, and turning over in bed and seeing my slack jawed face inches from her own in the dark. That could have pushed her over the edge of sanity.
Once I'm done shaving, I grab my see through towel and jump into the shower that's no bigger than a fat man's coffin. Either the water is too cold or too hot. In the summer time the water is hot enough to peel your skin off and in the winter the cold water makes me look like my testicles never dropped. The shower reminds me of a multiple personality person with schizophrenia trying to order food at a drive through window. Just plain confusing.
I'm dressed in my over-sized clown looking jumpsuit and waiting for the door to open. I'm going to be sentenced today. The most time I can get is 32 years.I don't know how I can think of such a length of time without having a massive stroke and only half of my elephant man face moves and the other half hangs there like a giant snot ball hanging off the nose of some kind.
I short step out the door as it opens. It's like I already have leg shackles on. The time I'm going to get is starting to take over my thinking and movements.
My world is going to shrink to three meals a day, yard, shower time, mail time, where the CO passes by my cell as if his ass is on fire. That's in the future, as bleak as it is. My present is full of hope and prayers to God that the judge will have pity on me. With a sardonic smile upon my face I'll continue with my story. Pity huh? That bastard actually smiled when he sentenced me to 27 years, and he has the nerve to tell me Good luck to you sir.
Written by and experienced by,
Roland F. Stoecker Jr.
6/16/16

Thanks for writing! I finished the transcription for your post. It made me smile/chuckle!
Keep up you're writing. It is a great way to release your emotions.
Thinking of you,
J. :)
I will remember that day burned into my memory for the rest of my life seeing you shackled being taken away from me seeing your eyes after hearing how long you’ll be away my heart broke that dreadful day in 2002. If only I could have know how important it was to stop you the day our lives changed forever. I will love you until my last breath my wonderful husband. I am so proud of the man you have worked to become I and our children, grandchild are so very lucky to have you.
Forever your wife
Alicia