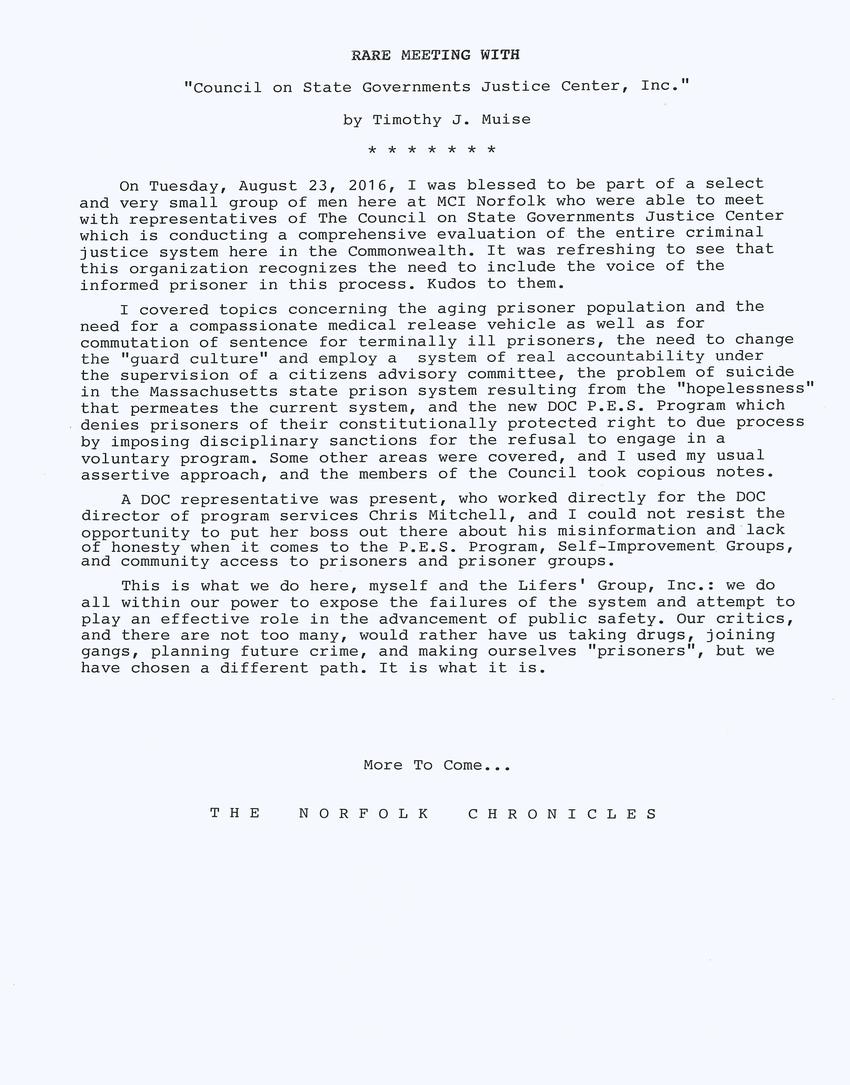 On Tuesday, August 23, 2016, I was blessed to be part of a select and very small group of men here at MCI Norfolk who were able to meet with representatives of The Council on State Governments Justice Center which is conducting a comprehensive evaluation of the entire criminal justice system here in the Commonwealth. It was refreshing to see that this organization recognizes the need to include the voice of the informed prisoner in this process. Kudos to them.

I covered topics concerning the aging prisoner population and the need for a compassionate medical release vehicle as well as for commutation of sentence for terminally ill prisoners, the need to change the "guard culture" and employ a system of real accountability under the supervision of a citizens advisory committee, the problem of suicide in the Massachusetts state prison system, and the new DOC P.E.S. Program which denies prisoners of the constitutionally protected right to due process by imposing disciplinary sanctions for the refusal to engage in a voluntary program. Some other areas were covered, and I used my usual assertive approach, and the members of the Council took copious notes.

A DOC representative was present, who worked directly for the DOC director of program services Chris Mitchell, and I could not resist the opportunity to put her boss out there about his misinformation and lack of honesty when it comes to the P.E.S. Program, Self-Improvement Groups, and community access to prisoners and prisoner groups.

This is what we do here, myself and the Lifer's Group, Inc.: we do all within our power to expose the failures of the system and attempt to play an effective role in the advancement of public safety. Our critics, and there are not too many, would rather have us taking drugs, joining gangs, planning future crime, and making ourselves "prisoners", but we have chosen a different path. It is what it is.

I read a lot of your posts, but really comment.

I am truly curious though, and my questions come as a result of a recent piece I heard on the radio. This is in no way meant to be disparaging.

For the long term prisoners, past a point, how compassionate is the release? Truly.

I'll use the example of a 75 year old man who has been in cpsince his 20's. At this point, it is very clear that any recidivism is probably approaching the probability of zero. But, the person that is shoved on the streets would seem to me (an outsider) to have nothing beyond the freedom it self going for them. Without contributing to social security, that man has no form of income besides the state. Medicare/Medicaid is a crap shoot for senior citizens to my mind (I worked in nursing homes for a long time), and the way that population is treated is often quite poor,

Does there come a point for a prisoner when the life inside is actually preferred to the unknown outside (and again, this is true curiosity, I do. It mind being educated)

I correspond with a man on these blogs who murdered a friend in cold blood, chopped him to pieces and desecrated the corpse. He's in his 40's now, and thinks he deserves a chance out side the walls. I disagree, as prison is literally all he has known.

Am I in the wrong here?
So just leave things as they are, Maggie? Cuz we just 'can't do any better'? You think that's a kindness? I'm wondering what they think of that... Your example is legit - for that guy - it's an idea that will work for him, but not all inmates fall into that category....

The problem is having put them there for that long to begin with!!
It's like putting a 4 year old in a 6 hour long time-out - it produced NOTHING USEFUL.

What is getting these guys to the point of chopping up a body? Why are we so violent?

I find it hard to believe, in a nation of allegedly EXCEPTIONAL people, that we can't find a better way. This is a challenge that our 'exceptionalism' should meet head on willingly - it's the one challenge we need the most focus on. If our prison systems would get off their collective asses and come up with some new material, they'd have 34 million more people singing in tune with them.

If we want to 'prove' to the world we're not a bunch of schmucks, we ought to start there.
No. I don't think everyone should stay incarcerated. I think you are takin my question wrong.

What I am asking is pat a certain point, is it a kindness or a cruelty to release an aging inmate.

I agree that the sentences handed down are ridiculous in many, many cases. I do think that some cases (particularly violent ones) deserve really whatever is given to them, but in that case, I am biased. I've had personal exposure.

personally, I find the entire issue to be absolutely horrible. You have a man who will be unable to enjoy retirement, may be at a loss as to how to function in today's society, and may be entirely bereft of family. It's an awful, awful concept to consider.

That's why I asked, is it a mercy to let an aging prisoner out, or is it a cruelty to just throw them out into the world. As a society, we offer nothing to these people. No matter what that person may have done in their earlier life, they are still a,person, and it is just a horrible thing to consider throwing a person to the wolves after extended incarceration.

A perfect society would offer some sort of safety net, but we barely do that for the majority of our population.

That is the entire basis for my question... Is it compassionate, or is it cruel. I truly do not know.
Everything you say is true, & the solutions depend purely on a society that is growing more jaded, angry & vengeful, rather than kind, happy, purpose driven & progress-minded. Prisoners & their problems in relation to society are low in priority.

That's too bad; because not all who leave are agied, but they still match all the criteria you outlined. We're out here bitching abut unfair prison practices & lack of jobs.... Here's a job: take care of all the old men leaving prison... !
What s concept.
Except for the most dangerous psychotic cases, a lot of qualifying prisoners can be trained to be personal care assistants , literally the biggest employee shortage we have in the medical community. Same with homemakers and NURSES.
A program featuring assisted living, or just a different type of facility where they're granted a modicum of movement, of freedom... SOME kind of consolation! They should be offered a choice. Otherwise it'll be "the shawsank solution" for most.
But our prison system has the whole show sewn up. The suggestions made here would go against the grain of corruption, greed, & power in place that's feeding the elite few in charge. None of our ass clowns intends to volunteer their lucrative lifestyle in favor of radical groundbreaking judtice reform. That'd be too much like actual work. These galumpkies wanna sit on their collective duffs & collect a paycheck.
I also want to say I'm the mother of the criminal & the grandmother of the victim and I don't think violent offenders are all deserving of their sentences.
See Tims proposed legislation for violent offenders under the age of 24. Brain science. My son falls into that category. Prosecutors arbitrarily trim & alter their cases to say what they want them to say, to put in a show for the public to make them feel safer.
And the fact is, they are no safer. Men go in for far milder crimes come out to commit more heinous crimes because of our prison systems lack of concern for their future. Turning an involuntary manslaughter case into a murder case and taking it from 8 to 15 years, to a 15 to life sentence --- it's purely money driven. And they count on the common man not having a half-million dollars around for the defense to show why it was not murder. Prison Corp Inc are taking advantage of this every day all the time and until that changes, we're going to have old incapacitated men they can't be released from prison because it's cruel. How convenient.
Jim Morrison from Banker & Tradesman, Boston University email addy,
Please check your gmail. You sent a PM & I have an answer.
Tim has asked for a personal visit. Gmail.
I've worked with hundreds of inmates over the years, women and men - and none of them want to die behind bars. That's their greatest fear. They don't care at all about the circumstances that they find themselves in when they are released. If they are infirm and are in a terrible nursing home, hospital - whatever. They have nightmares about dying in prison - wake up in a cold sweat horrible nightmares. If they get one day outside the gates and die there - that would be what they wanted.

There is no circumstance that they might find themselves in, imo, that would be worse than being in prison - except homelessness and at that age there are agencies that would make certain that wouldn't happen. And, for sure, the medical care that they'd get outside (as bad as it might seem) is head and shoulders over what they receive in prison. Even the worst of what we offer 'out here' is better.

Keep in mind that in prison you are a prisoner - that means the nurses will not quite believe anything you say and the MD's and RN's will touch you like you are a prisoner - capable of violence. No one holds you hand, soothes you when you cry - helps you explore old photos on the internet. You ARE your crime and are seen as a potential perp. That's just how prison works. Even if you are 80 and beyond being an actual perp. Hospice in a medicaid nursing home is cheaper than keeping someone in prison - and the inmate would appreciate it more (sort of a win-win for both).

Sure, some folks need to stay locked up (remain dangerous even as 60-70 year olds) - but the research suggests that most offenders sort of mellow out and stop offending as they age. After 50 the recidivism rates nose-dive. 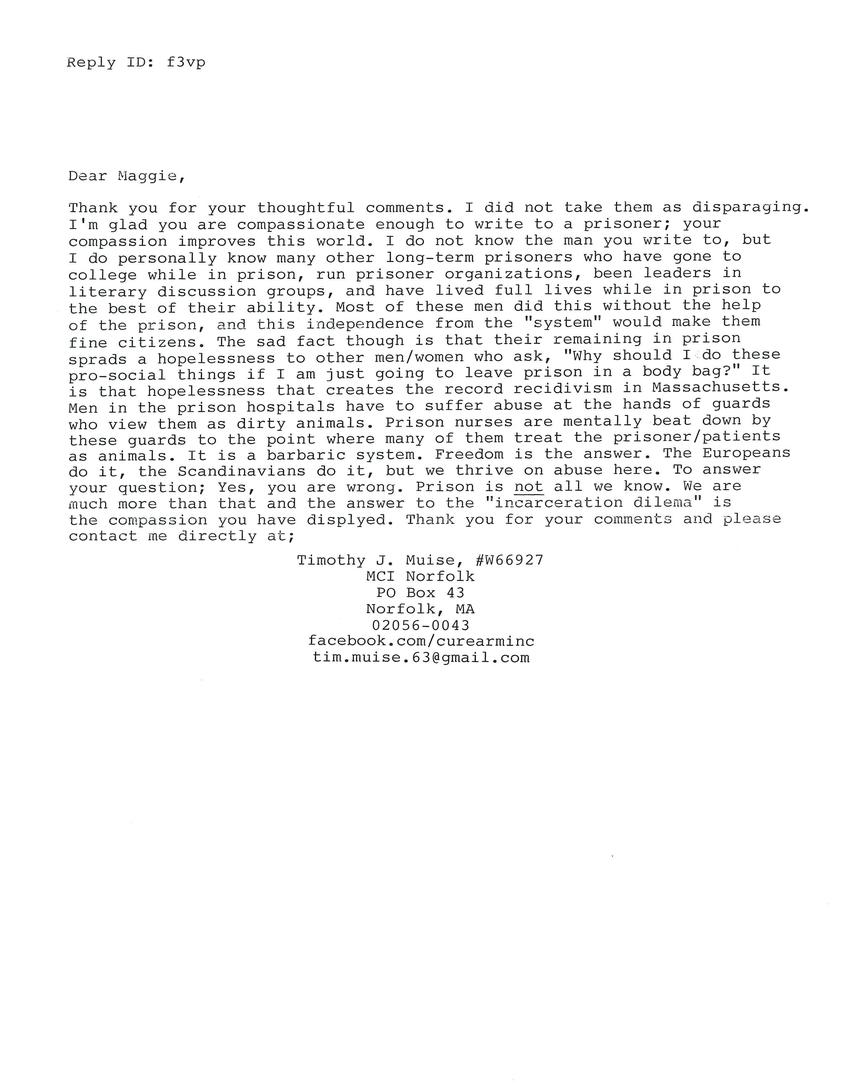 food for thought then. Thanks, Mr. Muise.

Maybe part of the issue for me here is forgiving what this person did to my friend.

i would enjoy corresponding with you, as your ideas are thought provoking, and your satirical wit towards what is obviously a horrible situation speaks volumes to,your intelligence and drive for life.
(scanned reply – view as blog post)
uploaded Sept. 26, 2016.  Original (PDF) 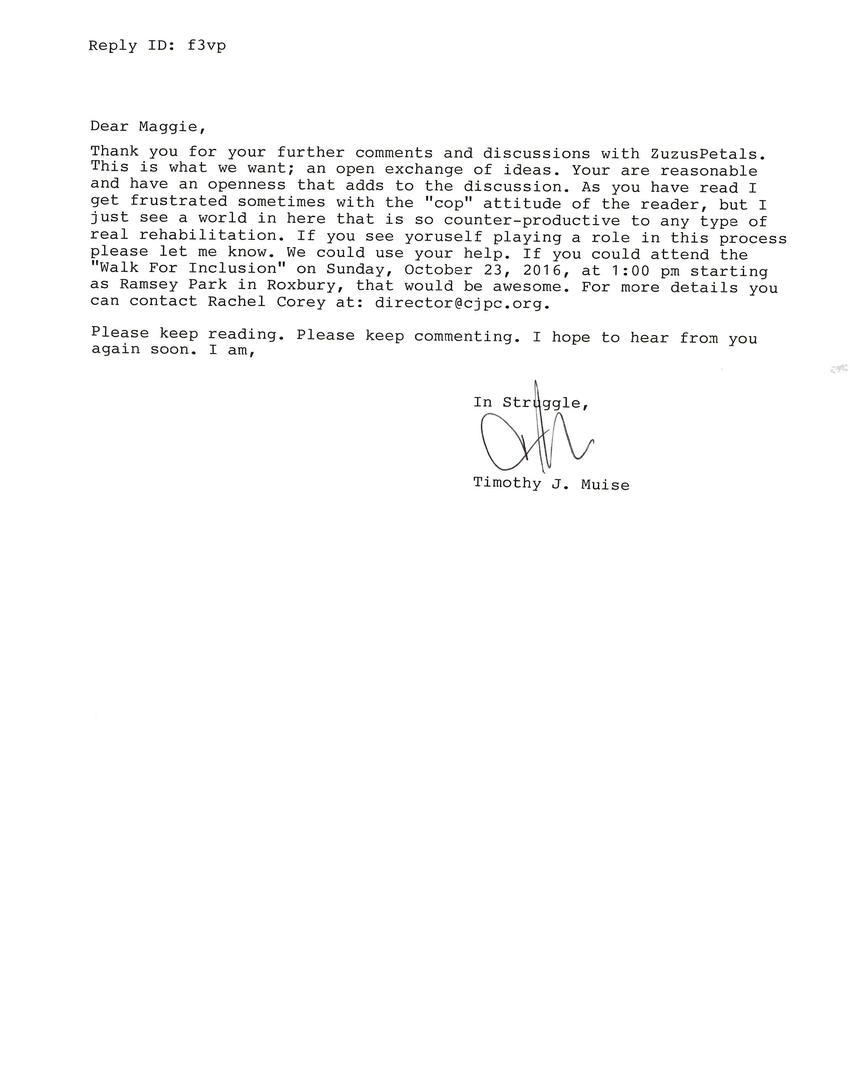 Thanks for writing! I finished the transcription for your post.
(scanned reply – view as blog post)
uploaded Oct. 3, 2016.  Original (PDF) 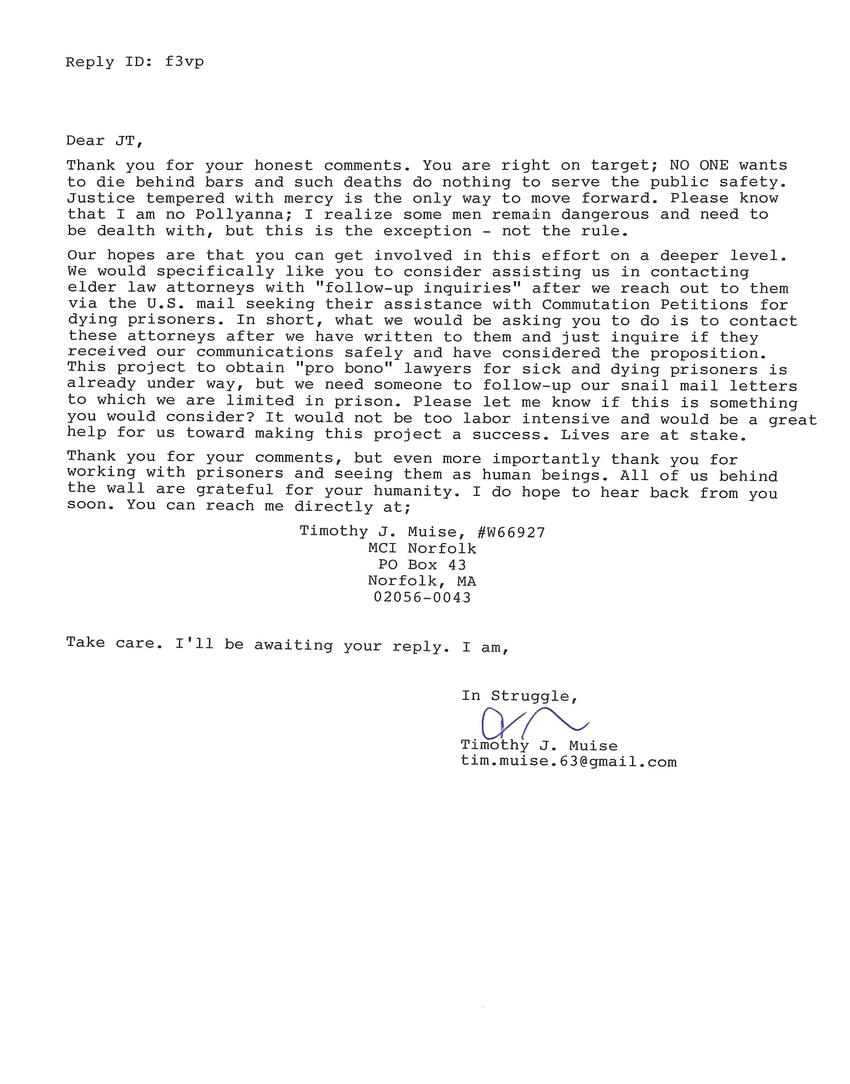 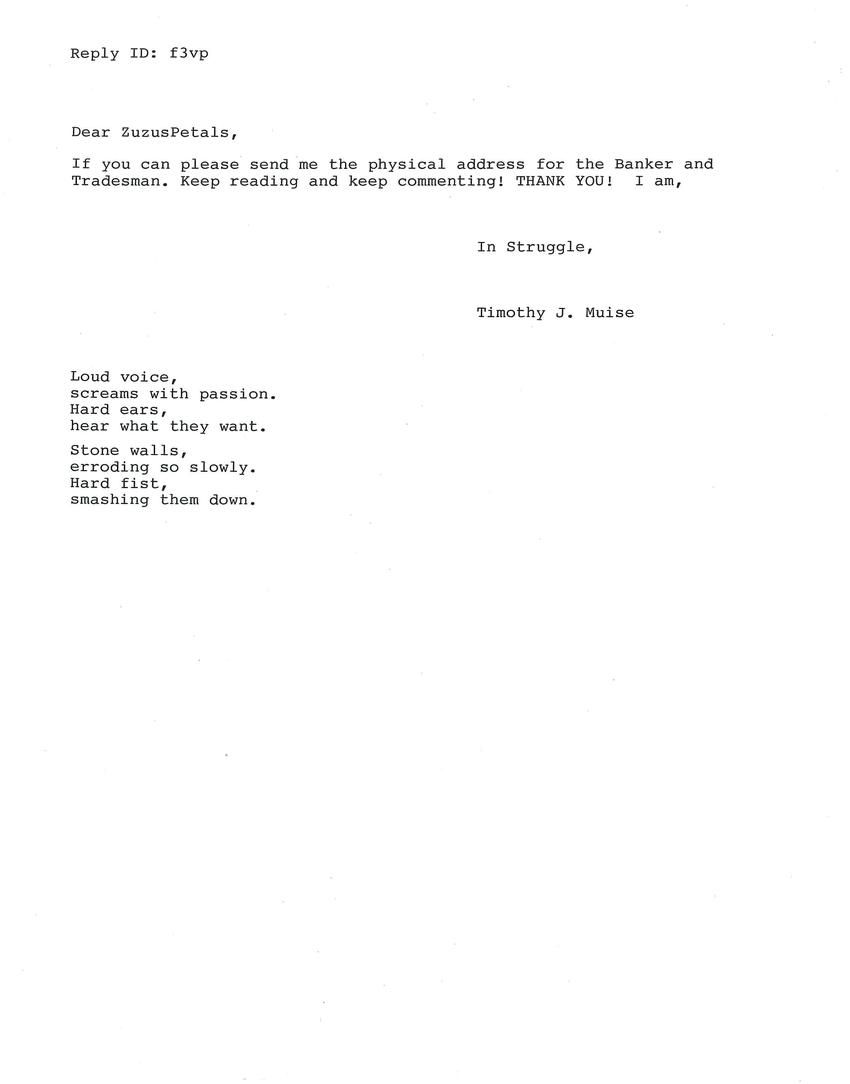 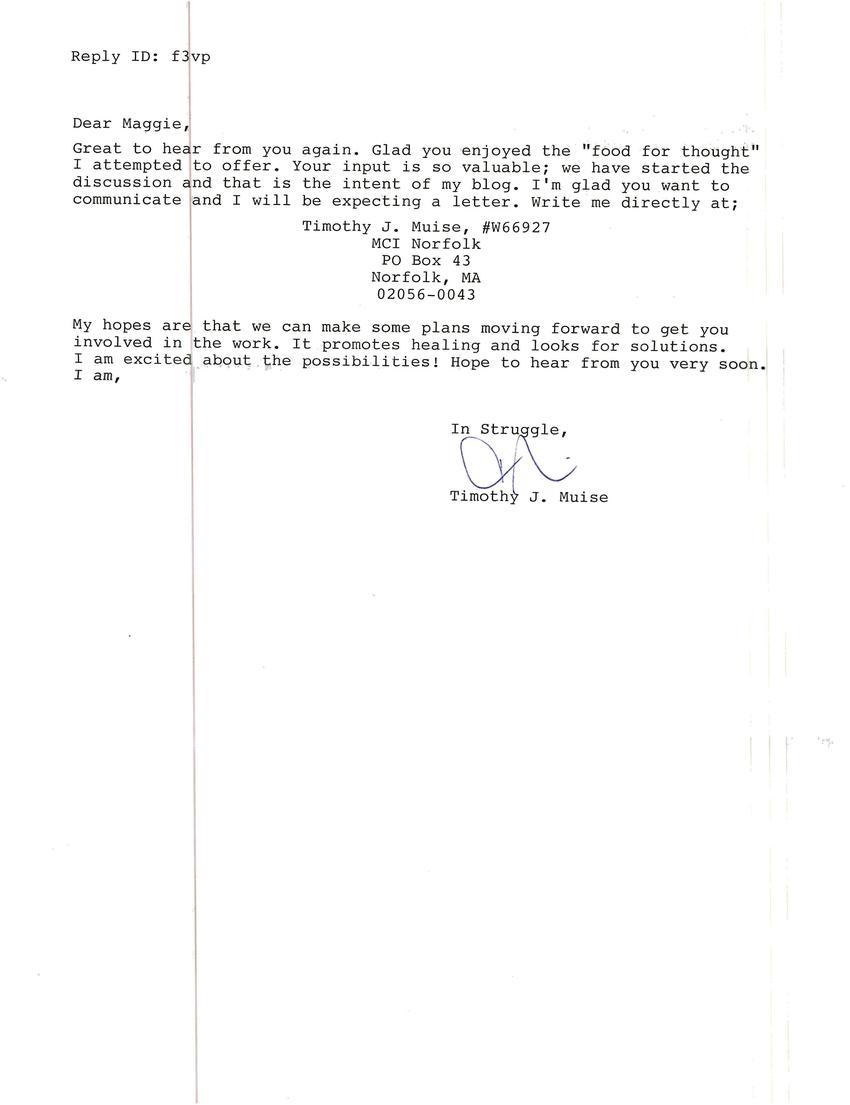