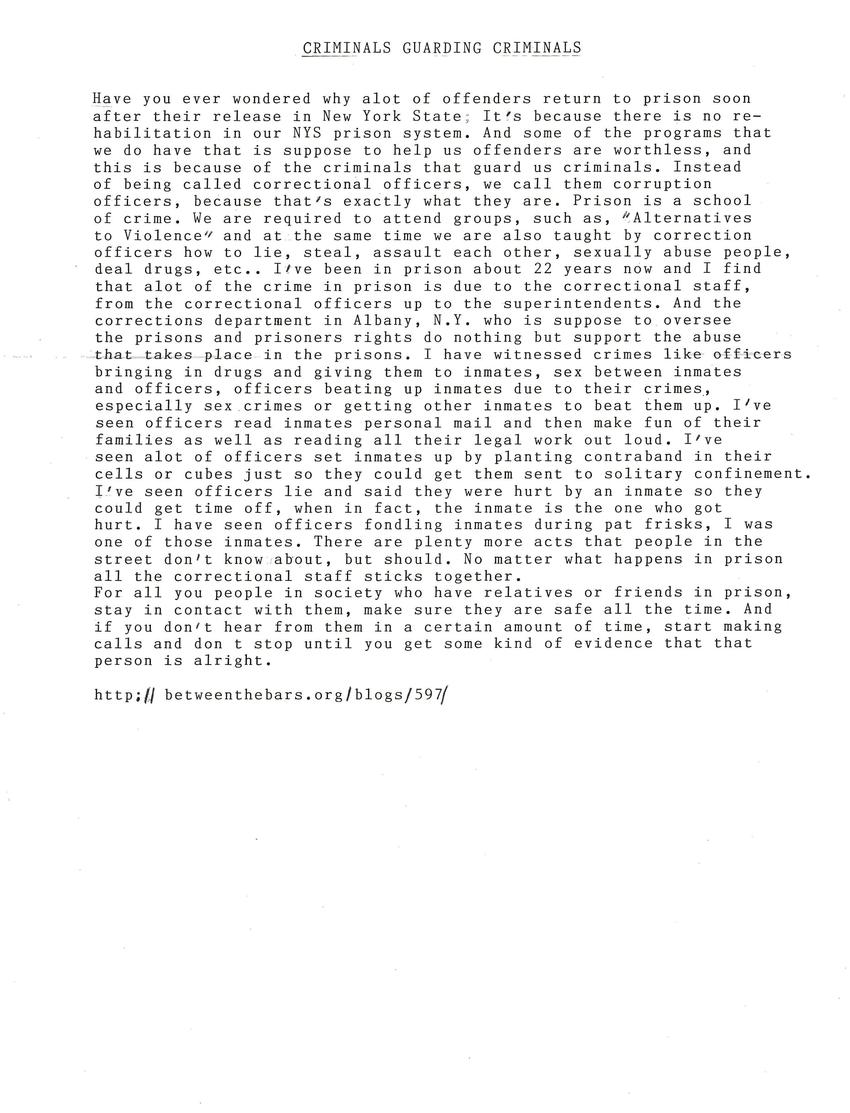 Have you ever wondered why a lot of offenders return to prison soon after they release in New York state; it's because there is no rehabilitation in our NYS prison system. And some of the programs that we do have that is supposed to help us offenders are worthless, and this is because of the criminals that guard us criminals. Instead of being called correctional officers, we call them corruption officers, because that's exactly what they are. Prison is a school of crime. We are required to attend groups, such as, "alternatives to violence" and at the same time we are also taught by correction officers how to lie, steel, assault each other, sexually abuse people, deal drugs etc. I've been in prison about 22 years now and I find that a lot of the crime in prison is due to the correctional staff, from the correctional officer's up to the superintendents. And the corrections department in Albany, New York who is supposed to oversee the prisons and prisoners rights do nothing but supportive use that takes place in the presence. I have witnessed crimes like officers bringing in drugs and giving them to inmates, sex between inmates and officers, officers beating up inmates to do their crimes, especially sex crimes or getting other inmates to beat them up. I've seen officers read inmates personal mail and then make fun of their families as well as reading all their legal work out loud. I've seen a lot of officers set inmates up by planting contraband in their cells or cubes just so they could get them sent to solitary confinement. I've seen officers lie and said they were hurt by an inmate so they could get time off, when in fact, the inmate is the one who got hurt. I have seen officers fondling inmates during pat frisks, I was one of those inmates. There are plenty more acts that people in the street don't know about, but should. No matter what happens in prison all the correctional staff sticks together.

For all you people in society who have relatives or friends in prison, stay in contact with them, make sure they are safe all the time. And if you don't hear from them in a certain amount of time, start making calls and don't stop until you get some kind of evidence that the person is all right.

It's this type of "criminal thinking" and self absorption that got you in prison in the first place. Stop fighting society and make an effort towards rehabilitation. NY state has many programs to offer. Stop feeling sorry for yourself, grow up and take responsibility for your past actions like a man.
Thanks for writing! I finished the transcription for your post.

I'm so sorry to read your words and what you and your fellow inmates go through on a daily basis. No crime justifies what happens in there. We all know it happens. Some don't care and think you deserve whatever you get. Some care, but not enough. And the rest of us care but don't see any way to change the system. Power corrupts. As wardens abuse their power, police abuse their power, and politicians abuse theirs. There doesn't seem to be a solution. Those in charge are always taking advantage of someone, aren't they?
I hope you keep writing. Maybe someone in power will see your letters and decide to do something about it. There are always a few good apples spoiling their bunch. 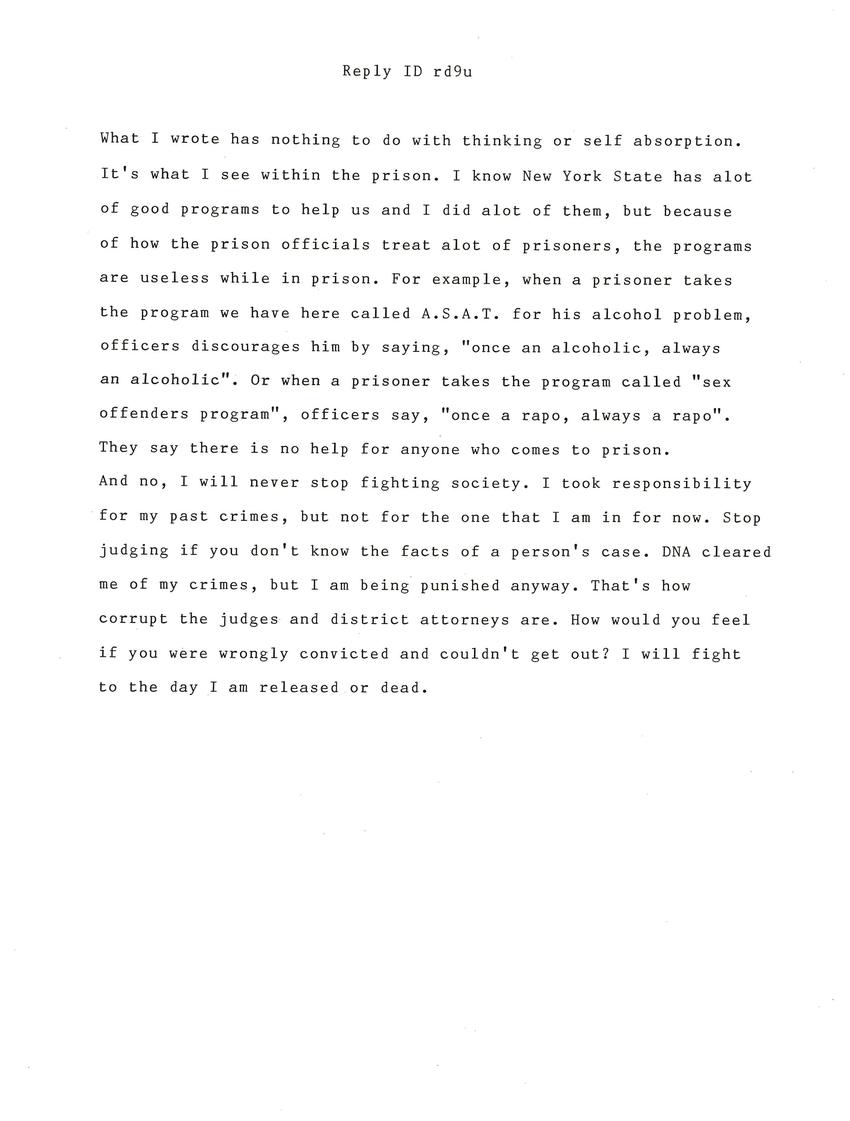 i was truly amazed at what I read!It breaks my heart, really. How strong an inmate has to stand in his own struggle there at your place in prison...I will write this to George jr. So he knows what's going on in prisons.But I'm almost sure he realizes it.To be in a prison is a place you'd never like to return.Henry, I am thankful you opened my eyes. We shall be friends and I will help you as best I personally can.I will write you later more. I've to go by now.I got your picture, and I am very pleased to see your face. a hug from Rita
I can't believe my eyes right now with the statement you wrote at the end of this blog. What about the victims of the prisoners? Yawl didn't keep them safe! They suffered and still do til this day. Not to mention, the families of the victims and prisoners family members suffer too. It's sad to hear how corrupt it is.. and yes, it needs to be changed. Absolutely nobody deserves that kind of treatment! But, you made the choice to commit the crimes. Crime is time and you knew what it was like to be there. Yet, chose to return. Rehabilitation?! Ughhhhhh, don't get me started on that subject!! You can't change your genes, but you can change how your brain responds. First thing is common sense! Use it, practice it, learn from first mistake and so on.. and yes, it's true.. once you are an alcoholic, you always are. Same goes for rapists and so on.. doesn't mean you can't stop..You just chose not to. You can't rehabilitate your genes but you can break the circle. I'm interested to read your blog now. I always wondered how your​ brain thinks. So, I'm sure by now you have realized I received your letter. Yes, I would still like to have the paternity test done. However, it may be a while. It's kinda ironic how you speak of such corruption because I see it CONSTANTLY, not just in the system, but outside those walls too. I am an outstanding citizen, never been in trouble yet have been emotionally and neglectfully treated by the law. This is why the PT test is on hold.. because I have to investigate my daughter's death on my own. The investigation was ruled a suicide but I am 99.9% sure it wasn't. Discovered that the investigation wasn't done properly and I can't afford a lawyer or a private investigator. There for I have no peace or resolution to this painful life changing event. I found her..So I know what the scene appeared to be but I also know she couldn't have staged it so perfect as she was in and out of conciousnes. No drugs/alchohal and multiple other factors from witnesses seeing a car speed out of driveway to a store clerk being told she was dead before they even declared it..And SO MANY OTHER THINGS. So as you can see, I am truly busy.. Between the grieving process that took a toll to all of this..I don't know what to do at this moment.. so I pray for a miracle that someone out in this world will listen to me and truly help getting to the bottom of this. My mind is overwhelmed right now and I can't think of doing the PT test because if by any chance Clearance is.. it would mess with my emotions right now. As far as the family, I don't relay messages or give people information. That's to their discretion. I stay out of everyone's business and they respect to stay out of mine. Now, the picture.. I'm not sure honestly. I will have to think about it. How many kids have you truly fathered? I heard I have two other half sisters, is this true? I heard one of their names are Harley.
I heard the other is Loretta West. I tried looking for her but I have no information about her so, obviously I couldn't find her. How did you find my new address? Can't you find her the same way?
(scanned reply – view as blog post)
uploaded May 13, 2017.  Original (PDF) 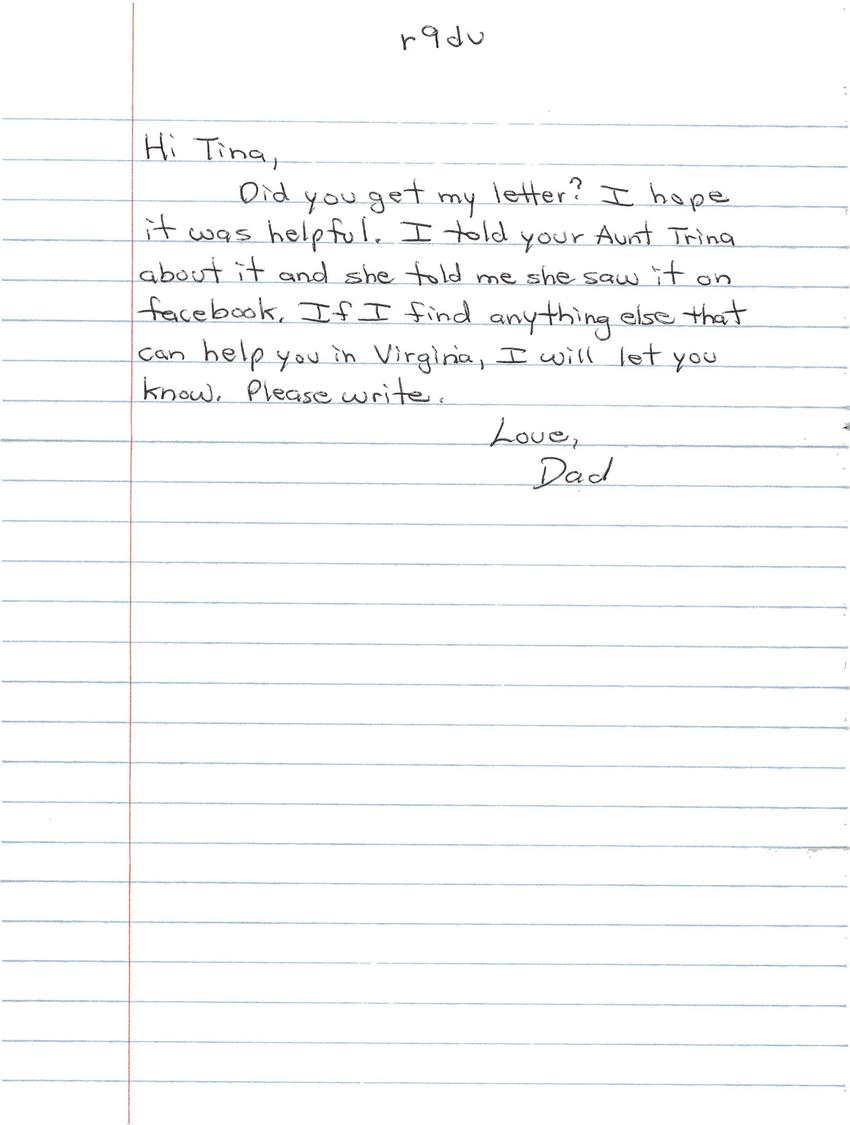 I got your letter and understand you were busy studying and needed time extra doing this.It is important!I really hope you've success in what you are undertaking! Four different cases that are pending is a lot indeed.
I am so very sorry to hear what you're going through... The dead of your beautiful granddaughter. Loosing somebody dear to you, is so hard.May the parents find peace in their heart, I pray.
May you find comfort too in accepting that your friend is dying, Henry.It hurts...
Thanks fro the kind words on my behalf. :)Yes, George and me finally found each other.It means a lot. It was his birthday recently: June 28. I missed him a lot. In his honor I listened to music, as this is his passion. And it felt in a way he was here.That same evening we had a meeting with the neighbors of our block. We agreed to let put a new floor upon the recent one on our terraces.Several terraces had problems.And I made a call to a French friend of mine,Marie France and we talked till 1:30 in the night!
On a tram i got to know a new friend, Geertje,(the 'ee' sounds like the 'a' of gay and the 'e' at the end, like the 'a' of amidst). She is Dutch.
I asked her if she too came from the movie Michelangelo? She didn't but we had a nice chat. Drank something on a terrace, because it was very hot here!After seeing on another occasion the film Selma, from Martin Luther King, she invited me home.Her husband Bert is a famous poet!With a big moustache.:)I ate lunch at theirs and they even let me stay for a dinner!I was touched by their hospitality! He even gave me his written poet book.Tomorrow Geertje and me go to the Zoo. We became very good friends! I study 3 languages on internet. Russian (I had classes before; my youngest daughter Leslie is a Russian translater), Italian(I had also courses of that language)and a new one: Swedish.it seems like a mix of English and Dutch. It's fun to study it!
Today,the 1st of July, I called an old friend, Marie Claire; we studied together for being primary teachers. We will try to meet each other somewhere.Friends are precious!:)
Henry, may you find the needy energy and find those you like to see.Much luck wished! Blessings and friendship.
Kind greetings from Rita!