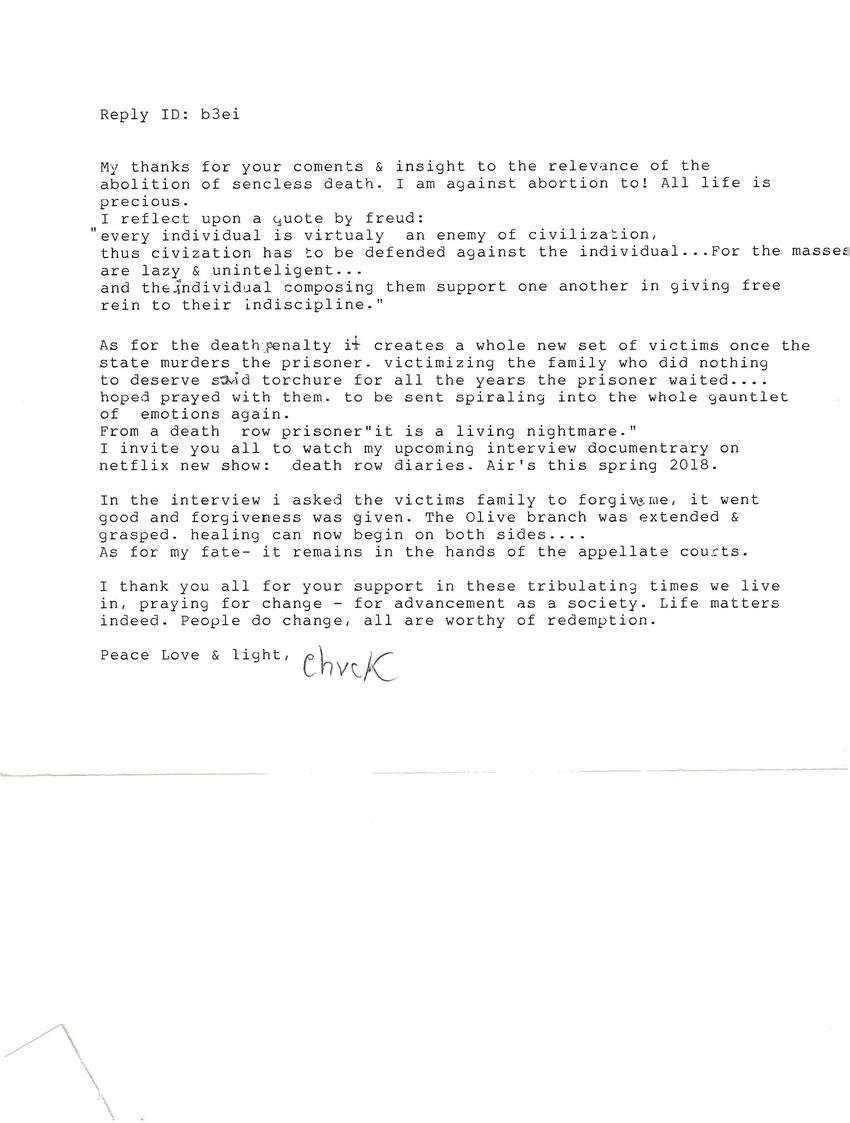 My thanks for your comments and insight to the relevance of the abolition of senseless death. I am against abortion too! All life is precious.

I reflect upon a quote by Freud: "Every individual is virtually an enemy of civilization, thus civilization has to be defended against the individual... For the masses are lazy and unintelligent... and the individual composing them support one another in giving free reign to their indiscipline."

As for the death penalty, it creates a whole new set of victims once the state murders the prisoner. Victimizing the family who did nothing to deserve said torture for all the years the prisoners waited... hoped and prayed with them. To be sent spiraling into the whole gauntlet of emotions again. From a death row prisoner, "It is a living nightmare."

I invite you all to watch my upcoming interview documentary on Netflix: Death Row Diaries. Airs this spring 2018.

In the interview I asked the victim's family to forgive me. It went good and forgiveness was given. The olive branch was extended and grasped. Healing can now begin on both sides. As for my fate, it remains in the hands of the appellate courts.

I thank you all for your support in these tribulating times we live in, praying for change, for advancement as a society. Life matters indeed. People do change, all are worthy of redemption.

I looked on Netflix and found a program called ‘Death Row Stories’ is that where your interview will air or is it a brand new program altogether? I am interested in watching it, so I will keep an eye out for it.

I’ve been reading articles on the Death Penalty. I came across this quote from Marietta Jaeger-Lane;

“Loved ones, wrenched from our lives by violent crimes, deserve more beautiful, noble and honorable memorials than premeditated, state-sanctioned killings. The Death Penalty only creates more victims and more grieving families. By becoming that which we deplore-people who kill people- we insult the sacred memories of our precious victims.”


So are the victims’ families able to find closure in the execution of their loved ones perpetrator? Or do they have to relive the crime over and over again in the appeals process? Wouldn’t it be easier on them if their loved ones' killers were sentenced to life without parole, rather than the death penalty? So that they aren’t re-traumatized in the multiple retellings of the story in media outlets that often precede an execution, as well as reliving the scenes on an endless loop in their own minds.
Rather than consider what is best for the families that homicide victims leave behind, society often uses these people and their pain to score political points in the death penalty argument.


Even when victims’ families are eagerly awaiting the elusive closure they believe the application of the Death Penalty will bring them, they find that the years stretch out indeterminately. Even when the execution finally takes place, a surviving family's pain doesn't disappear with the perpetrator's pulse. It must seem like a cruel joke at that point. After waiting years, even decades, for it all to ‘end’ they find out that there isn’t a miraculous ending to their pain and loss for a loved one.


What about the cases where the Capital Punishment isn’t the consequence? Because the Death Penalty is not applied to all homicides, it leaves some surviving family members with the impression that the justice system values some victims more than others.

“In sorting out my feelings and beliefs, there is, however, one piece of moral ground of which I am absolutely certain: if I were to be murdered I would not want my murderer executed. I would not want my death avenged. Especially by government--which can't be trusted to control its own bureaucrats or collect taxes equitably or fill a pothole, much less decide which of its citizens to kill.”

Freud’s quote, that you mentioned, is correct in that the masses are lazy and unintelligent. If those that support the killing of Americans in abortion and Capital Punishment were to actually research the methods used and the real price that society pays in permitting these atrocities, there would be few supporters left. Most people don’t want to see the ugliness so they turn a blind eye.
What a blessing for you to have received forgiveness. What a blessing for the families to have found it in their hearts to give forgiveness. That is, indeed, where real healing is found; not in the act of vengeance and retribution, but in the selfless act of forgiving another their trespasses. It is easy to forgive the innocent. It is the guilty who test our morality. People are more than the worst thing they have ever done.

"For if you forgive others for their transgressions, your heavenly Father will also forgive you.
Matthew 6:14

We must be able to forgive others, even if they have deeply wounded us, so that we are able to receive forgiveness ourselves. Jesus Christ in His wisdom knew that it was important to ask for forgiveness to those we have wronged as well as confessing our sins to Him.

If your brother or sister sins, go and point out their fault, just between the two of you. If they listen to you, you have won them over.
Matthew 18:15

I will keep you in my prayers, and do what I can to educate others on the travesty that is Capital Punishment. It is flawed in many ways and has no place in our modern society. We are not cruel barbarians, we have no business carrying out cruel barbaric acts.